Hot Wheels has a tsunami of Japanese cars coming 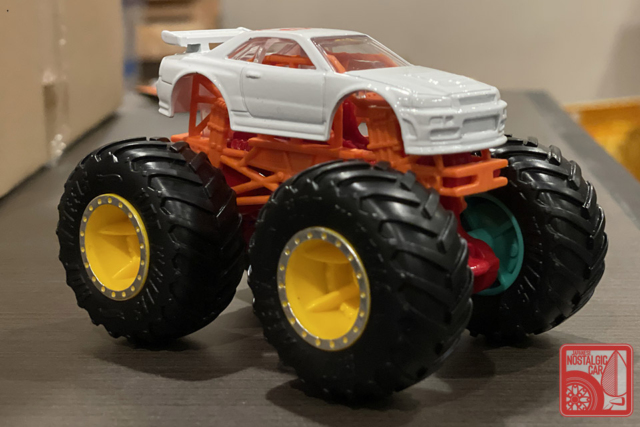 Our friends at Hot Wheels recently shared with us some previews of upcoming cars. For fans of Japanese diecast, there will be no shortage offerings infiltrating every series the company makes. Here’s a couple dozen peeks at what’s coming down the pipe, from some in the very early stages of prototyping to ones that are already complete. 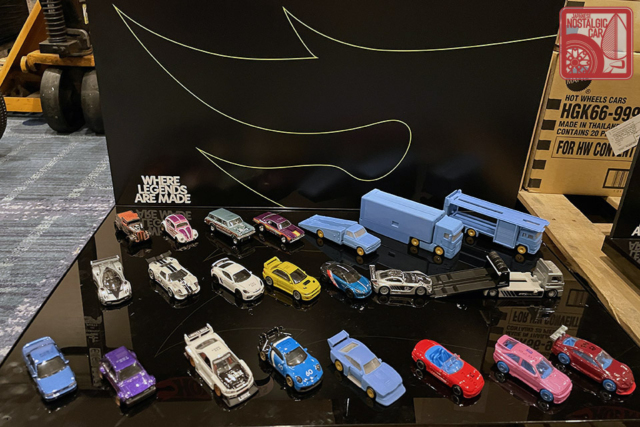 First off, we apologize for the varying photo quality of these cars. Some were given to us to display at the JNC booth at JCCS so we spent some time with them with a proper DSLR and good lighting. Others were snapped on an iPhone in an ad hoc photo session in a dingy Marriott conference room that was being used as temporary storage during the Hot Wheels Convention in Los Angeles. Anyway, on with the show.

Let’s circle back to what is the most surprising one of them all, an R34 Skyline monster truck. Insane, yes, but also incredibly awesome. Personally, my 3-year-old son loves monster trucks and he has a bunch already. Now he’ll be able to add a JDM tyte example to his toy box.

Hot Wheels’ monster truck chassis is particularly ingenious, with wheels that articulate up and down, but forward and back with some rotation side to side as well. We’re told the first colorway will be a Fast & Furious scheme, with recolors to follow.

One of the coolest new castings to come is a first-generation Honda Civic. It’s done in the style of a race car, with fender flares, rear spoiler, and front bumper delete. It has excellent proportions and stance on proper tiny wheels. It’s the work of designer Fraser Campbell, who will be taking over the work of Ryu Asada. This casting is of Fraser’s own design, though it is a tribute to Ryu and features his green “R” decal on the rear. And for customizers, Fraser tells us there might be some easter eggs that you can’t see unless you take the car apart.

The A60 Toyota Supra will soon make a return to the Hot Wheels lineup. The original, and all-stock L-type version, made its debut in 1983. For its modern revival the casting takes on a new customized form. Fender flares, a chin spoiler, oil cooler, louvers, and a ducktail spoiler are all part of the kaido racer aesthetic. There’s even a one-headlight wink to bosozoku culture.

Two popular mainline castings from 2022 will soon return as recolors in red: the Liberty Walk Nissan Silvia S15 (based on a real drift car) and the new Nissan Z.

The Toyota 2000GT will make a comeback in yellow and black. This is one of our favorite Hot Wheels castings designed by the great Jun Imai. It perfectly captures the grace of the real car, and looks fast even standing still on a desk.

The Y60 Nissan Patrol made its debut this year, a tribute to the modified dune climbers popular in the Middle East. The first color was tan, the second color will be dark blue.

Speaking of SUVs, a Mitsubishi Pajero Evolution will join the mainline next year. This will be the second Paj Evo Hot Wheels has done. The first, from 2004, was modeled after a contemporary Dakar Rally race truck; this one is an earlier iteration. The model shown here is a very early prototype made via 3D printing.

One of the dark horse castings from 2022 was this Nissan Maxima drift wagon. The whole idea of an 810 wagon in the Hot Wheels lineup is awesome enough, but an American-spec one (it’s LHD with 5-mph bumpers) with fender mirrors and box flares is so out there it’s brilliant. We’d probably cringe if this were a real car, but we love it in Hot Wheels form. This one should be on shelves already (or soon, depending on your region).

The legendary Mazda 787B has thus for been only available in Hot Wheels’ premium lineup. Soon it will join the mainline in a blue and gold livery with some changes to the mold. In the premium line, the 787B had a removable engine cover. Here, the body will be one complete piece.

The FC Mazda RX-7 designed by Ryu Asada somehow looks stunning in this non-factory yellow color. It’s reminiscent of the iconic Competition Yellow Mica of the FD and looks great without any other graphic treatment. This car is available now in the Nightburnerz 5-pack, though it has proven to be one of the hardest multi-packs to find this year.

There will soon be a recolor of the original R32 design by Alec Tam, which debuted in 2002 (not to be confused with the a more recent casting in stock form). It was the first JDM casting Hot Wheels ever did and it’s still going strong. This one features a new licensed character, Godzilla. Appropriate!

The Nissan Fairlady Z, based on Jun Imai’s Datsun 260Z, returns in a themed series called Ultra Hots. These are a throwback to a mid-80s line featuring futuristic aero-style wheels and spectraflame paint jobs, which have been revived for the modern times. The wheels alone are very nostalgic for me, as I loved this series when I was a kid.

Apologies for the terrible photo quality of this Lan Evo. The Mitsubishi Lancer Evolution IX is an excellent addition to the Hot Wheels portfolio, which already includes Evos IV, VII, and X. This is a metal shot prototype that does not yet wear its final colors.

A couple more metal shot prototypes, final colors TBD. We’re stoked to see the NB Miata join the lineup as a 2003 Mazdaspeed MX-5, as well as a Lexus RCF GT3. There are not enough Lexuses in the Hot Wheels lineup! Both of these will be premium castings.

Another FC Mazda RX-7 joins the ranks. This time it’s decked out in TRA-Kyoto’s Rocket Bunny Pandem body kit. This will enter the premium lineup in the 2023 Boulevard series in white. The black version you see here will be a “chase car” similar to the Treasure Hunt cars in the mainline.

This year a yellow ST205 Toyota Celica GT-Four debuted the casting in the Mountain Drifters premium set. It’ll come back in an upcoming premium line, looking spectacular in red.

The 90s heroes cars are finally getting their due. The FD Mazda RX-7 exists in both regular and premium variants already. For the latter, the colors Hot Wheels has been using have been on point. A Competition Yellow Mica version was released in the 2019 Street Tuners premium set, and the next iteration looks brilliant in Innocent Blue Mica.

The Nissan 300ZX premium is coming back as well. This one looks to be finished in Nissan’s Cherry Red Pearl.

After a debut in 2020 in metallic blue, the premium Subaru 22B makes another appearance dressed in yellow. The Liberty Walk R34 Skyline returns with white as its second color as well.

This Nissan Skyline C210 is a 2022 Collector Edition car, which means its only available as a mail-in. Each year Hot Wheels does several promotions with various retailers. In the case of this Skyline Japan, you have to buy 20 regular cars at Kroger stores and send in the cardboard card backs along with some money. A few weeks later you get this car in the mail. Official rules can be found here.

Soon Hot Wheels will launch a new line called Elite 64. These will only be available online and feature a bit more detail than your standard premium car. Each one will have a special feature unique to the car itself. The first Japanese car to appear in this series will be the JZX100 Toyota Chaser.

Its special feature will be its suspension. Unlike other Hot Wheels cars, the Chaser will not fave a standard solid axle. Instead it has a true four-wheel independent suspension, which allows it to sit with slight negative camber. Euro cars in the series are represented by a Mercedes 300SL with working gull-wing doors and a 1969 Mustang tube-frame race car with removable shell.

A custom Datsun 240Z with a fantasy BRE livery will appear in the Red Line Club next year. The black and chrome finish looks amazing. RLC cars are online exclusives and you must first be a member of the Red Line Club to have the opportunity to purchase them. Be warned, though, you need to be pretty quick to buy them when the sales go live, because they typically sell out in a matter of minutes.

The Red Line Club is also gearing up for a couple of nods to beloved designer Ryu Asada, who passed away last year due to cancer at age 42. Ryu loved Hondas, and so an upcoming RLC car will be a DC2 Integra, complete with opening hood. This is still in the 3D printed prototype stages but will almost certainly be a sought-after item.

And last but not least, the RLC will offer a version of Ryu’s personal Acura NSX. Ryu customized his car after an obscure Suzuka Circuit pace car. To honor his memory, the Hot Wheels design team pulled out all the stops, giving the NSX working lights. Activated by pushing down on the spoiler, the lights cycle through multiple patterns such as all-on and alternating flashing. Incredibly, the car even has an interior, though a slightly shallower one the standard to accommodate the electronics for the lights.

Hot Wheels is absolutely killing it with their car selections. For fans of non-Japanese cars, there’s an AMG Mercedes 560 SEC and a tasty Porsche 911 Carrera RS 2.7. We’re focusing on J-tin obviously, but even then there were a few we completely forgot to take pictures of. You can see some of those in the photo of the black board display that the team was putting together just before they were revealed to convention attendees.

In the lower left corner you’ll see a purple KP61 Toyota Starlet and a B13 Nissan Sentra, both awesome additions to the lineup. A Datsun 720 mini truck with extendable dancing bed is still in its very early prototype stages. A lot of exciting stuff is coming. The challenge will be keeping up with all of it.