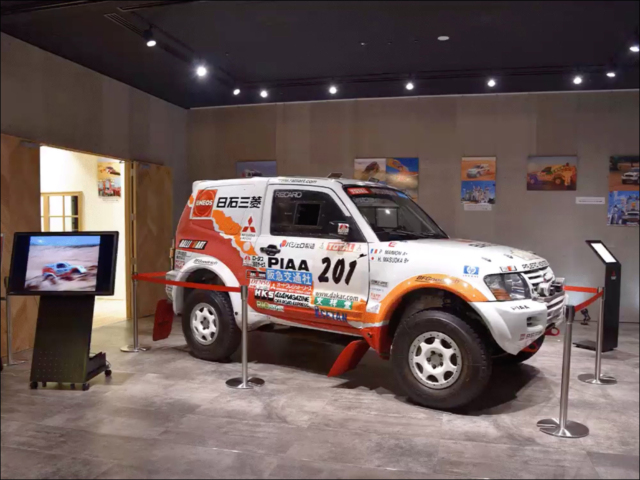 Like most carmaker headquarters buildings in Japan, Mitsubishi Motors’ in Tokyo has a small display area, gift shop, and coffee stand in the lobby. Typically, they display whatever new cars the company has on offer (or nothing at all if there’s been a recent scandal). However, Mitsubishi has just brought out its 2002 Paris-Dakar Rally-winning Mitsubishi Pajero for a temporary exhibit. 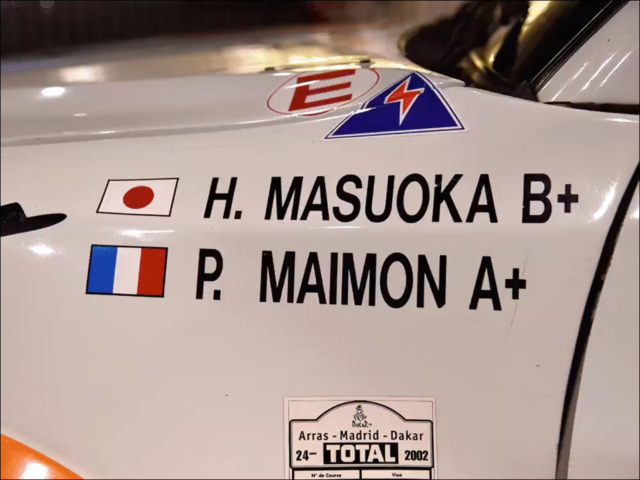 Mitsubishi was in its Dakar heyday back in 2002. It was the second year of what would become an unprecedented seven-year winning streak for one of the toughest races in the world. The route changed every year, and for 2002 it ran 9,427 km (5,858 miles) from the French town of Arras to Madrid to Dakar.

The winning team consisted of driver Hiroshi Masuoka and navigator Pascal Maimon, but in fact Mitsubishis dominated that year, filling nine of the top ten spots. A Toyota came in 9th. 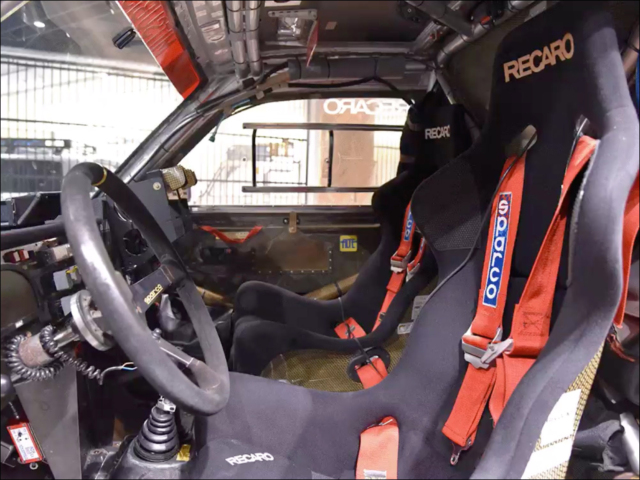 The body is identical to that of a short-wheelbase third-generation Pajero, except for the fender flares, Kevlar underbody plates, and carbon fiber doors and rear window panels. Under the hood lies a DOHC 3.5-liter MIVEC direct-injection 6G74, tuned at Masuoka’s request to broaden the power and torque curves between 3000 and 5000 rpm, and producing a restrictor-limited 256 horsepower and 260 lb-ft.

Inside, the spartan cockpit has everything you’d need for a long trek through desolate lands. Much of the dashboard is occupied by a fuses that can be easily swapped out. There’s a dial to quickly cycle through one of four fuel maps, programmed to compensate for the varying quality levels of gasoline found along the route. Tire pressure can be controlled from the inside as well. Water bags are attached to the roll cage, their drinking tubes snaking along the cage and fastened to the A-pillar.

Under the dash is an interesting but crucial device — a cyclone-style centrifugal air cleaner to separate the fine desert dust out of the intake air. The extracted sand is dumped back outside the car, but there wasn’t enough room to mount it in the mostly stock engine bay, so it had to be re-routed through the cabin. 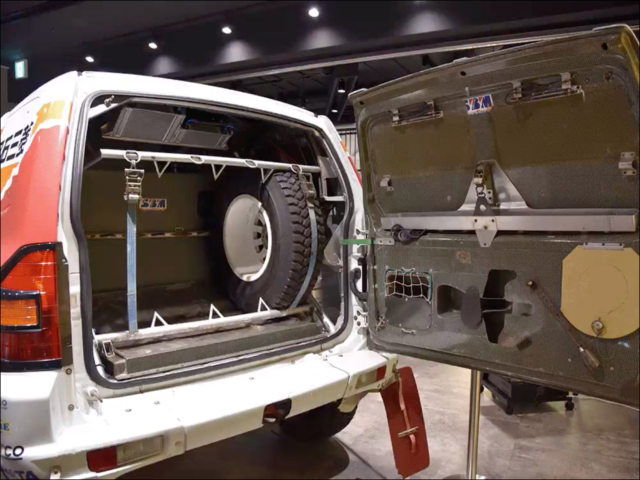 The rear seat and cargo area have been replaced with a locker large enough to house four full-size replacement wheels and tires. Yet curiously, the carbon fiber rear door still retains the indentation for an externally-mounted spare as you’d see on a stock Pajero. Hanging from above are heat exchangers for the transmission and differential, cooled by a rooftop vent. A 500-liter (132 gal.) fuel cell allows for nearly an entire day of driving without refueling.

The Pajero has been cleaned up but, thankfully, not completely restored. Parts of the undercarriage still have brown dust on them, and the well-worn 235/85-R16 BF Goodriches that were on the car as it crossed the finish line are still mounted. Through the imperfections, one can see what the Mitsubishi had to endure to earn a hard-fought victory. It’s awe-inspiring, and it will be on display at Mitsubishi’s Tokyo headquarters through June 30.