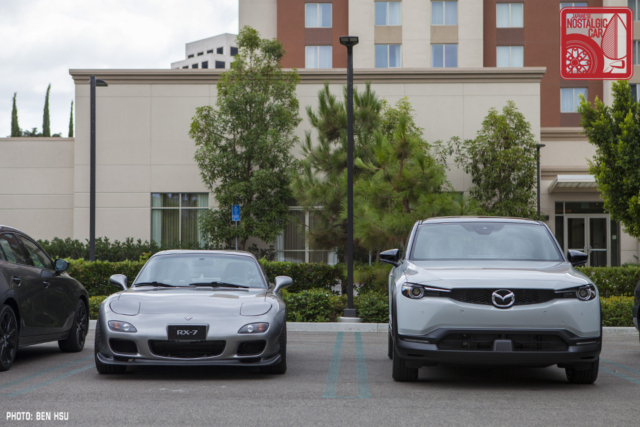 Mazda is one of the few car companies operating today that we feel really “gets” cars as something more than simple transportation. Every move they’ve made recently has piqued our car enthusiasm interest, so much so that we can hardly believe that a carmaker in 2021 is actually doing these things. But Mazda is not infallible, and when they make a rare misstep, especially on the first new model in decades to have “MX” in its name, we feel compelled to ask why. 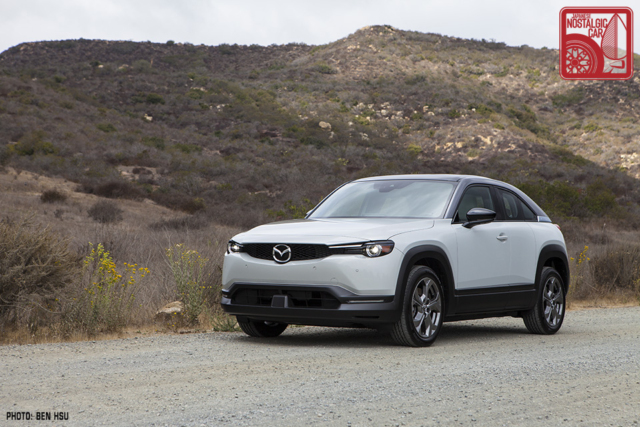 The Mazda MX-30 is not the type of car we typically cover. It’s automatic only, a crossover, and electric. The last EV we wrote about was this weird Nissan concept van from 1985. However the MX-30 also likely the only chance we’ll ever get at a rotary-engined Mazda again, and even though it’s not going to be in a fire-breathing sports car, we feel it’s a worthy endeavor on Mazda’s part out of respect for the engineers and race car drivers that came before. 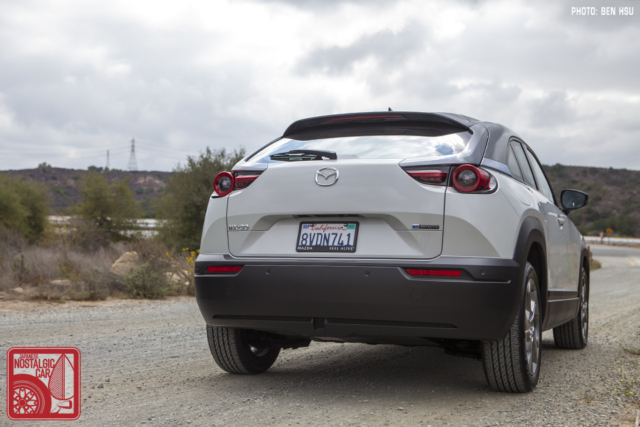 There’s only one problem. Preliminary specs on the MX-30 were horrendously bad, specifically when it comes to range, one of the key things customers look at when going electric. The MX-30 can go only 100 miles before it needs a recharge, ranking it dead last among electric cars from major manufacturers. The next worse is the Mini Cooper EV, which gets 116 (though it’s smaller than the Mazda). A base Nissan Leaf gets 150, the industry average is about 225, and some Teslas can go over 400 miles. 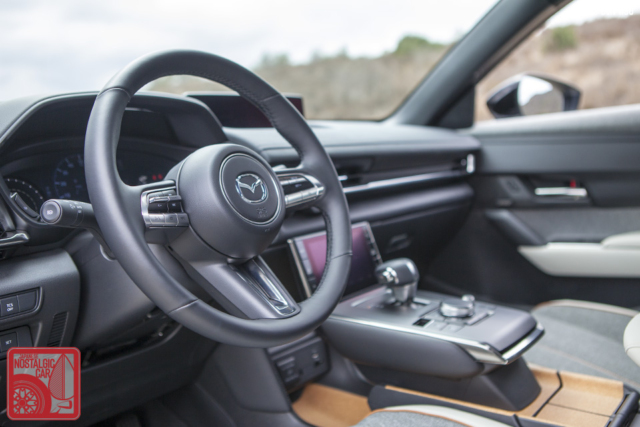 To be clear, this initial version of the MX-30 does not have the rotary range extender yet. It starts at starts at around $34,000 and is eligible for a $7,500 tax credit and even more state incentives. But even before the tax credit it’s cheaper than, say, a Chevy Bolt. Still, when the specs were announced in August, it shook our faith in the company. How could Mazda, a company that purports to understand the car market, and one that is staffed with some of the brightest and most talented engineers in the industry, put out a product so laughably uncompetitive? We had to know more.

So, when Mazda invited us to come down for a test drive, we went to see for ourselves. Plus, it’s the first new model since the 90s to bear the “MX” prefix — something it shares in common with performance-oriented models like the MX-3 pocket rocket, MX-5 Miata, and MX-6 sports coupe. 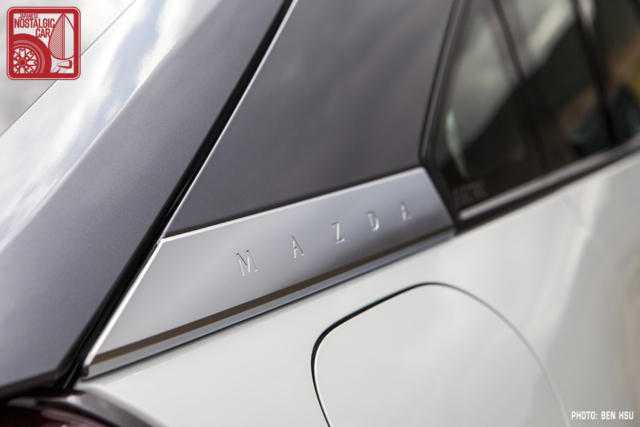 The good news is, Mazda engineers have not lost their minds. The bad news is, the current MX-30, as it stands, is still not a competitive product, but there’s a good reason for that. It’s not the reasons Mazda will publicly state, though. The official PR line is that they specifically chose the battery pack size so that 1.) there would be less environmental impact than making a large battery that no one uses the full capacity of, and 2.) the MX-30 could retain the Mazda driving dynamics that the brand is known for. 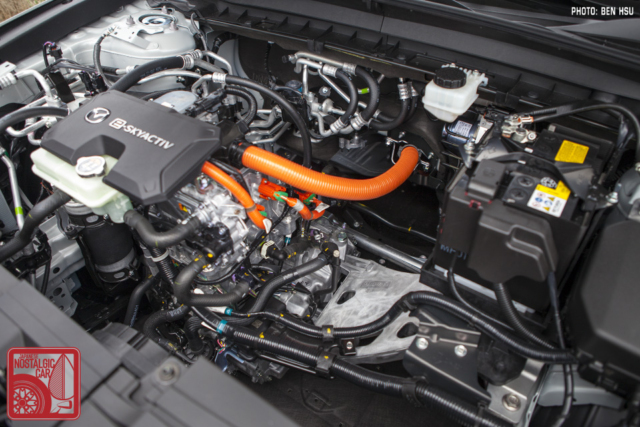 While both those things might be true, it’s also true that the MX-30 also is based on the brilliantly-handling CX-30 platform rather than its own EV skateboard. As such, there is only so much physical space for them to jam batteries into, and it’s already maxed out. Any remaining space is going to be used for one of the MX-30’s next evolutions — a fuel tank and a range extender built from a rotary engine. You can see in the engine bay a yawning hole ready for the RERE, right next to the high-visibility cables and connectors that happen to be the colors the Le Mans-winning Mazda 787B (coincidence?).

That leads us to what we surmise is the main reason for the 2022 MX-30’s existence: compliance. California already requires that a certain percentage of the cars sold by a manufacturer be Zero Emission Vehicles. Mazda has yet to offer a hybrid, and even if it did, that technically wouldn’t be a ZEV either. Each year, that ZEV percentage goes up, and without a car that fits the requirement Mazda is forced to pay quite a lot of money to buy ZEV credits from competitors like Tesla (who have a surplus of credits). 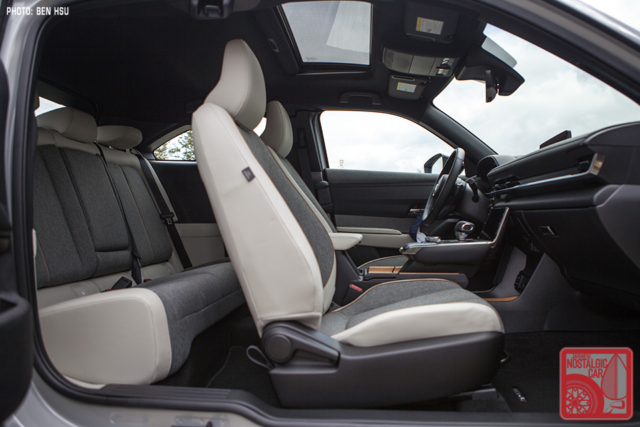 Of course, Mazda cannot say this publicly. But, they confirmed that they’re only offering the 2022 MX-30 in California, and we learned from Mazda spokespersons that Mazda only plans to sell just 560 of these battery-only MX-30s. Next year they’ll expand to other states and also debut the rotary version. All evidence points to the fact that the battery-only version is a standby to help defray the costs of an all-internal combustion lineup until a model with decent range is ready for prime time.

There are other advantages to releasing an EV early on as well. It takes a tremendous amount of work to develop an EV sales structure. Dealers need to be revamped, service bays updated with EV tools, salespeople and service techs trained. It’s not the kind of thing a car company can do overnight, and any jump Mazda can get on that process will be beneficial. 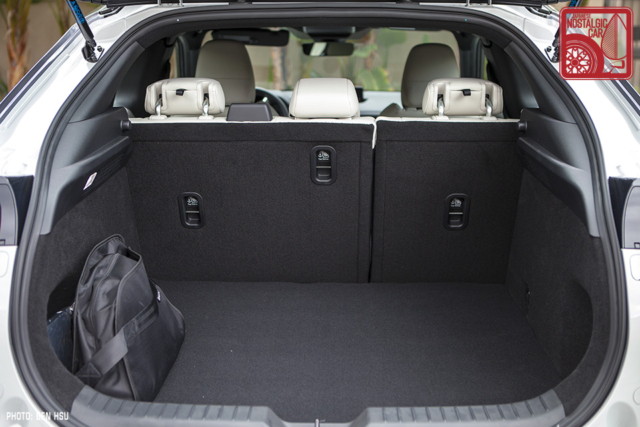 Theoretically, Mazda says there are some handling advantages that an EV offers, despite its greater mass. For one, the weight distribution is better. The 600-pound engine and transmission at the front has been replaced by a 280-pound electric motor, while the battery sits low in the floor. As a result, there’s less weight transfer from side to side when the car turns. The battery also sits in a protective cage, which doubles as a chassis brace to increase torsional rigidity.

Additionally, in a traditional car the engine mounts are soft because they need to isolate vibrations from the rest of the car. However, that means that giant mass can jostle independently whenever the car hits a bump or takes a sharp turn. That forces engineers to tune the suspension to compensate. With an electric motor, the engine mounts are solid, freeing engineers from having to compromise the suspension tune while simultaneously providing improved chassis rigidity. Even the tire sidewalls can be stiffer because they don’t need to absorb bumps as softly,  and with the enhanced weight distribution each tire handles less load in turns. 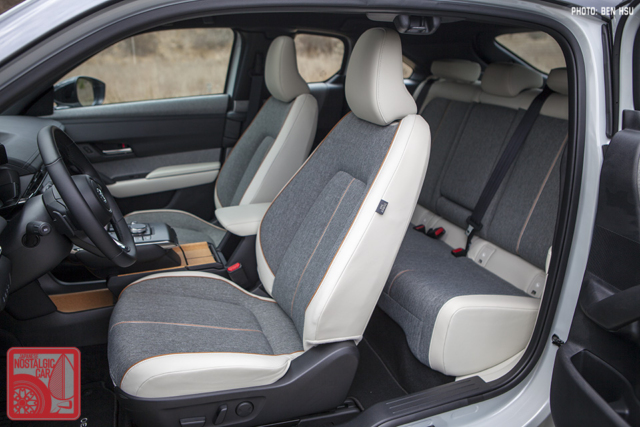 The MX-30 is not quite as connected to the road as the CX-30, which is in turn a bit less connected than the phenomenal Mazda 3. The slight handling deficit we felt may have been due to weight or low rolling resistance tires, or both. It still possesses a lively and accurate Mazda-like steering and handling feel, so it drives better than most competitors, electric or not.

Oddly, Mazda has tuned out the neck-snapping acceleration typical of EVs. Instead, the MX-30 has a more linear acceleration feel. Their philosophy is that while rocketship takeoffs are a neat party trick, they’ll get tiresome after the novelty wears off and it’s better to have smooth speed changes on the regular. Essentially, it drives like a non-turbo CX-30, which gets the job done though sometimes it does leave you wanting for more power. 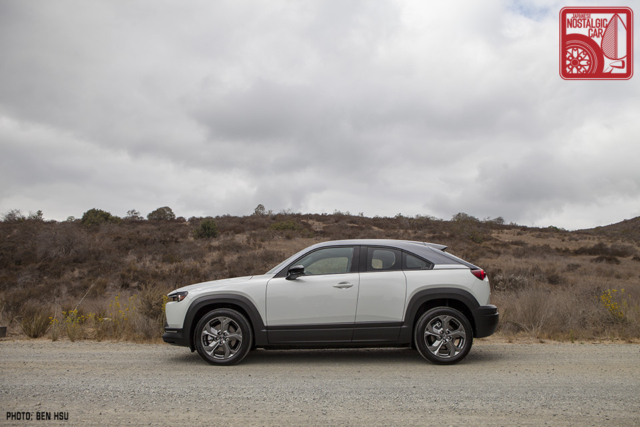 It’s probably a good thing that acceleration was limited, because while we began our drive with a full charge, by the end of a spirited 68-mile drive the battery had only 12 miles left, a total of just 80 miles. That it elicited a lead foot speaks well of the Mazda’s driving dynamcs, and to be fair other journalists we spoke to got closer to the 100 total. To compensate for range anxiety, Mazda is offering, for free, 10 days of use per year of any other Mazda vehicle. You can borrow a Miata or CX-9 for extended road trips simply by exchanging your MX-30 at a dealer. On top of that, Mazda’s offering a $500 credit to use at ChargePoint stations or to install a charger at home as well. 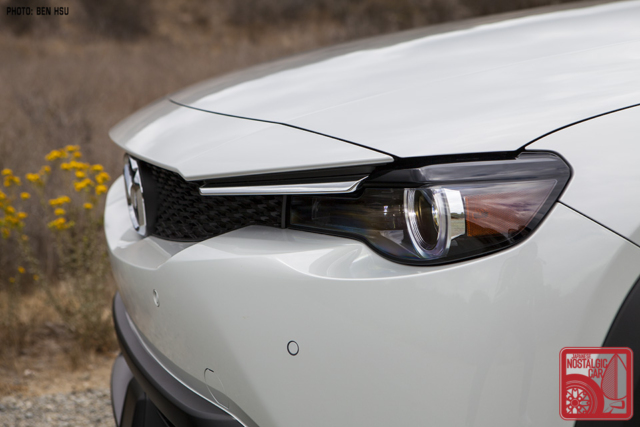 We also think the MX-30 looks better than most EVs, which try too hard to appear futuristic but end up looking rather indistinct. While the MX-30 deviates from Mazda’s current Kodo design language, it’s somehow still recognizable as a Mazda.

Mazda’s Simona Merker, a CMF (colors, material, and finish) designer, told us that the design department always has heritage on their minds. However, they don’t follow trends because the might be outdated in a short period of time. Mazda’s philosophy is to strive for timelessness, whether in design or driving feel. 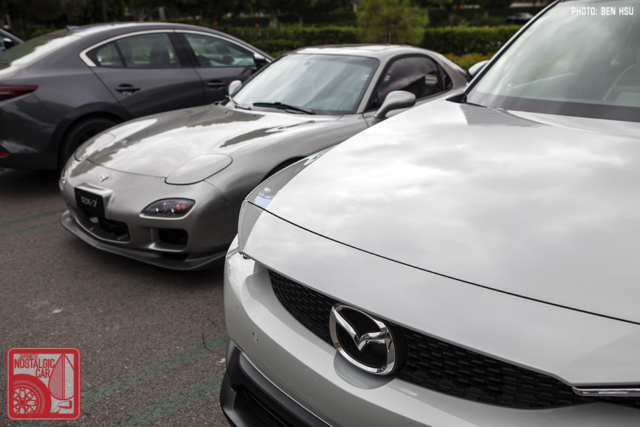 Speaking of timeless design, Simona owns the gray FD RX-7, seen in some of the photos here, as well as other Bubble-Era Japanese icons. Because she works in Mazda design, she used her resources to mix her own paint for the FD, which we guess makes it both non-factory and official at the same time. She comes from a Mazda family, and told us of her parents’ Xedos 6 (a German-market 626) and MX-3 she got as her first car.

Many of the MX-30’s interior bits that Simona was responsible for use recycled materials. The cabin feels cozy and premium, but not pretentiously stark like those of typical luxury brands. The use of cork in the center console is not only to improve sustainability, but Mazda’s 100-year-old history that began with cork manufacturing. Cork surfaces can also be found in areas you don’t necessarily see, but that can feel as you use the car, like the inner side of the door pulls. What Mazda calls Freestyle Doors are a nod to the RX-8 as well. 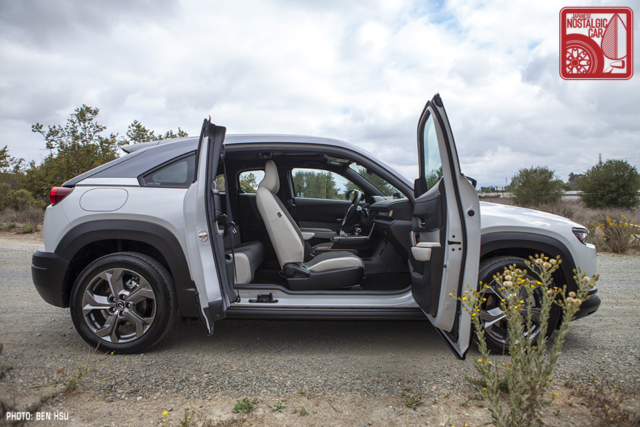 As for why it’s been given the MX, a Mazda spokesperson explained that the prefix is typically applied to special cars, not necessarily sporty ones. Each MX car was supposed to occupy a special place in Mazda history, as generational interpretation of something special. MX stands for “Mazda eXperimental” and it’s worth noting that the first MX car, the MX-81 concept, was far from a sports car. 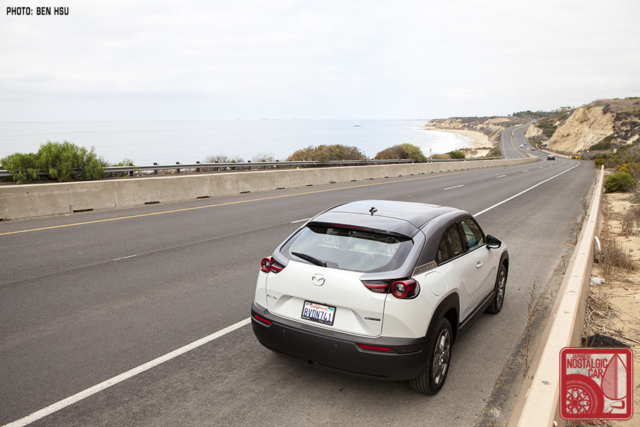 Here’s the bottom line. The MX-30, as it stands today, is a placeholder. It’s probably not something that will convince a lot of people to try out a Mazda. However, with its Mazda driving DNA the foundation is there for a potentially excellent follow-up. It feels like the MX-30 was supposed to have the range-extending rotary engine all along, and it gives us some hope that the electric future isn’t going to consist of every automaker building the same iPhone with wheels.

permalink.
This post is filed under: Next Version and
tagged: mazda, MX-30.