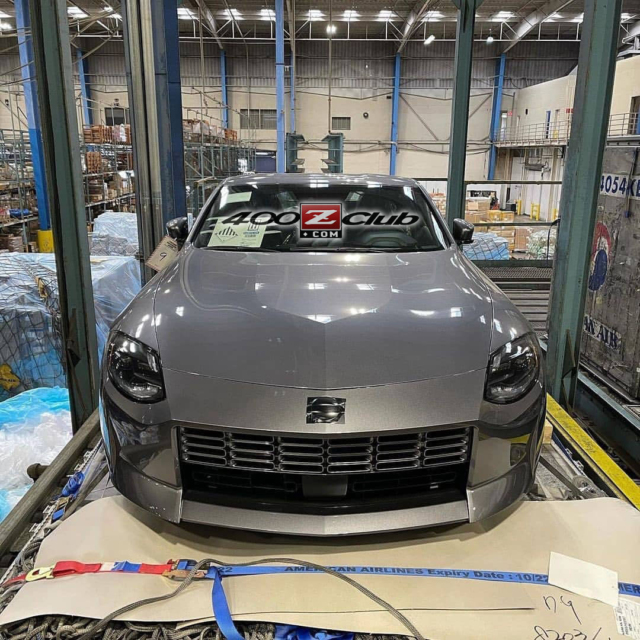 Two sets of images of the production Z35 Nissan Z have leaked. One shows a metallic gray car that evokes the Carbon Silver of the 350Z and Gun Metallic of the 370Z. Another shows what looks like a standard silver but is could also be a pearl white reminiscent of the Z31 Shiro and Z32. Both were posted to the 400ZClub forum, which says the photos were taken at Nissan’s Tochigi plant, but it appears to be a cargo staging area at a air shipment port.

Making an immediate visual impact is the upper grille. Blacked out in the Z Proto, the production Z35 reveals upscale brightwork that reduces the size of the opening. Just as striking is the body-color roof, showcasing the double bubble contours framed by the silver blade which runs along the roofline. The katana-inspired design cue leads the eyes to a new spoiler perched atop the rear deck lid, reminiscent of the 240Z’s.

The interior looks to be largely unchanged from the Z Proto, save for the fact that this model is an AT. Rest assured, Nissan has told us a production manual is definitely coming. We are glad to see the distinct deep cone steering wheel and signature triple pod cluster make it to production.

The pearl white model sports the black roof, which will likely be a factory option. The Z32-esque tail lamps are now accompanied by a cleanly integrated rear side marker, which sits flush with the body. The door handles have evolved into a more pronounced trapezoidal-shape. These, and the fuel door, are exactly as shown on the patent renderings from January. Also noted are the red brake calipers lurking behind the gunmetal split-spoke wheels.

There’s a lack of badging on the rear deck, which the Z Proto had. Front and rear emblems are taped over on these photos, so it’s not clear whether the rear’s backlit logo made it into productions. The C-pillar badges, we hope, will continue to use the retro Z logo derived from the S30’s.

All too many concepts get watered down for production, but the Z35 turns out to be a very faithful translation of the Z Proto. This is a good thing, because we think for a modern sports car the Z35 looks quite striking. If the Z Proto’s 400-horsepower twin-turbo V6 makes it into production, it’ll be one of the most compelling new Nissans on the market in years.

permalink.
This post is filed under: News and
tagged: nissan, Z Proto, Z35.