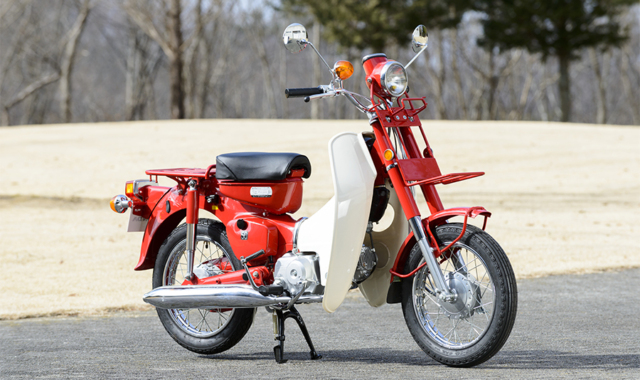 Spend any amount of time in Japan and you’ll eventually come across a red Honda Super Cub laden with bags zooming down a narrow street. These are the delivery bikes of Japan Post, the nation’s mail delivery service. Japan Post has had a long relationship with the Super Cub, one that dates back to 1971, when Honda developed a special variant of its popular motorcycle especially for the postal service. Now, Japan Post is honoring the venerable bike in return. 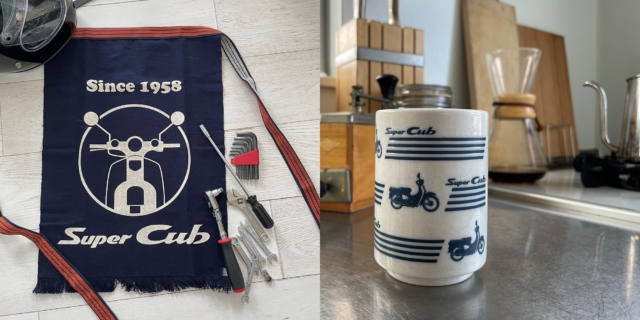 Rather than postage stamps, however, Japan Post will be offering two traditional Japanese items with a Super Cub theme. The first is a traditional shopkeeper’s maekake, a kind of old school craftsman’s apron. Such workwear has existed in Japan for centuries, and are still in use in some shops today. The second item is a yunomi, or ceramic teacup. These handleless vessels are made to withstand very hot liquids and are more informal than tea ceremony cups.

Honda’s postal service bikes were named Super Cub MD50, MD90, or 110MD depending on the engine size (the “MD” stood for “Mail Delivery”). In the 1960s, as Japan underwent rapid urbanization, the Ministry of Posts and Telecommunications put out a call to manufacturers to design vehicles exclusively for mail carriers. Honda submitted in 1967 a modified Super Cub and won. 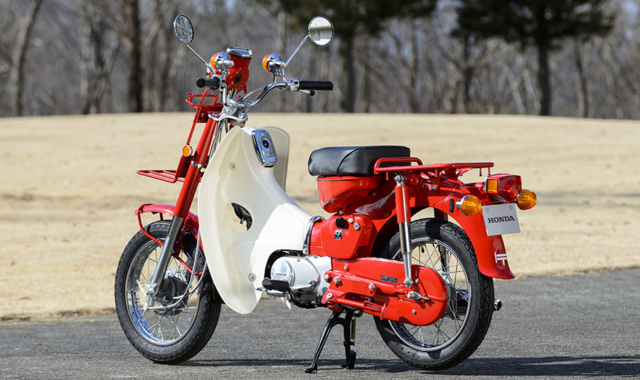 That led Honda to manufacture the exclusive MDs starting in 1971, built especially for Japan Post. They featured a small tray on the front to which mail carriers could easily hook a mailbag. As a result a high-mounted headlamp sat higher than on the standard Super Cubs. Some came with optional grip heaters for use in colder climates. The biggest difference was in the wheels. Regular Super Cubs came with 17-inch wheels, but the MDs were equipped with 14-inchers to reduce the turning radius in tight back streets. All were painted in the bright red color of Japan Post vehicles.

The MD Super Cubs were not sold to the general public, but it was possible to buy them on the secondary market. There are even shops that specialize in them. Somehow, it feels appropriate to link the Super Cub to such time-honored items as workwear and teaware. After all, the bike has sold 100 million units since 1958 and is still being produced today, and it feels as much a part of the Japanese landscape as maekake and yunomi.

Japan Post has issued stamps in the past when they’ve honored cars such as the Toyota 2000GT, Nissan Skyline and Fairlady Z, Mazda Roadster and RX-7. The Japan Post maekake and yunomi will cost ¥6,600 ($52 USD) and ¥1,430 ($11 USD), respectively. Both go on sale April 22 and can only be ordered if you live in Japan from the Japan Post website.