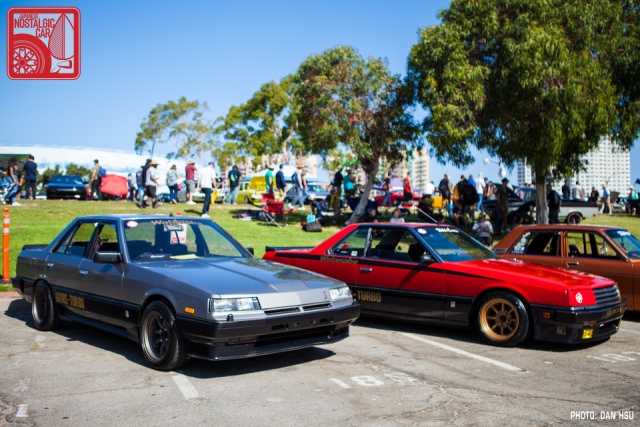 This year marked the 15th anniversary for America’s premier gathering of Nihon steel. To put that in perspective, at the first JCCS in 2005, the newest Japanese cars allowed for import under America’s 25-year import ban were built in 1980. The original Mazda RX-7, Toyota Celica XX (Supra), and S130 Nissan Fairlady Z (280ZX) were barely eligible. Now, the cutoff is 1994, and the spectrum of what’s allowable into the States is staggering. In our previous installment, we saw the rare USDM cars that JCCS had to offer. Here are some JDM ones.

When you think of desirable Japan-market cars, the Nissan Skyline is usually at the top of the list. Even three decades after its debut, The R32 GT-R is the holy grail of them all, and it’s no surprise they were the most plentiful Godizlla variant at JCCS. Though often seen gracing the booths of performance brands like Yokohama Tire and AEM, owner-displayed examples like JD Ashe’s white with red Rays LMGT2s  also filled the lawn. Grant Macwilluam’s gunmetal gray with Volk CE28s, purchased with 29,000 miles, took home second in the Best Skyline category. 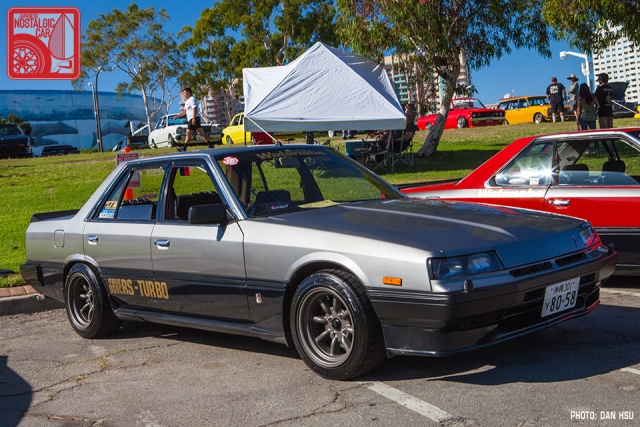 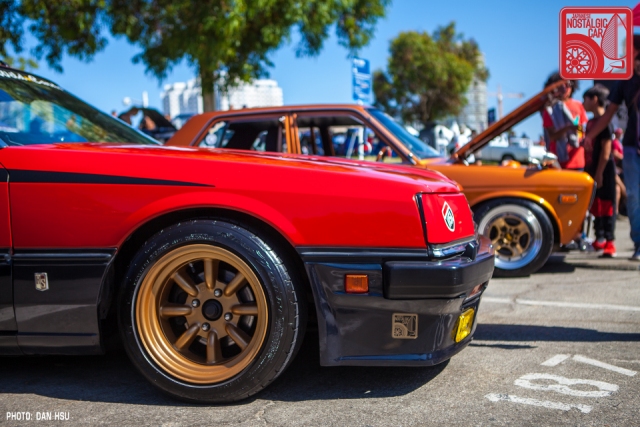 Rewinding the timeline a bit further, R30s were centerpieces of the massive Team Wild Cards display with perfectly fitted RS-Watanabes. Gold classic 8-spokes were the perfect match for Jay Kho’s red and black Newman coupe, as was the gunmetal finish on Mel Canones’s gray-and-black Tekamen sedan. Both were iconic in their 80s street style. 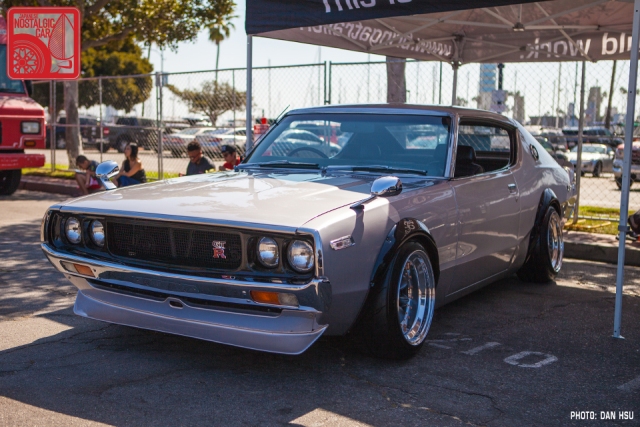 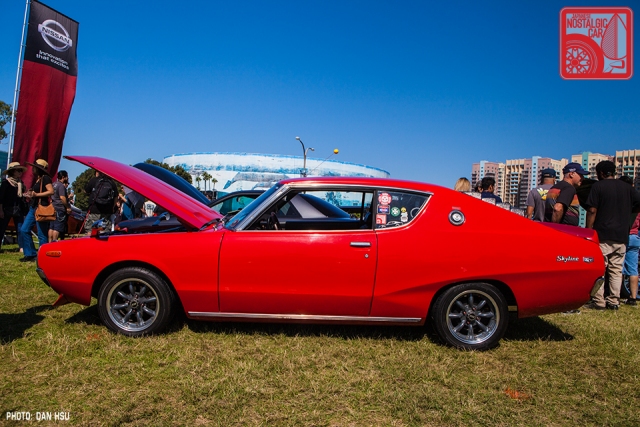 Kenmeri Skylines included both left- and right-hand-drive models. The former was a traditional build that looked like something straight out of Nos 2 Days, while the latter was actually a Middle East-market Datsun 240K, even rarer than the Japan-market counterparts. 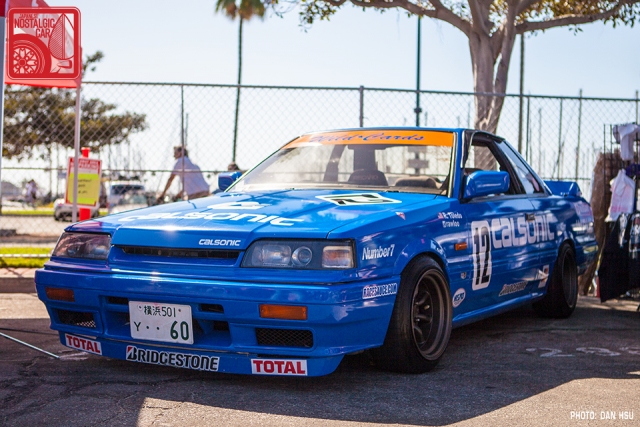 A single R33 GT-R marked the newest of the importable Skylines, resplendent in iconic Midnight Purple. 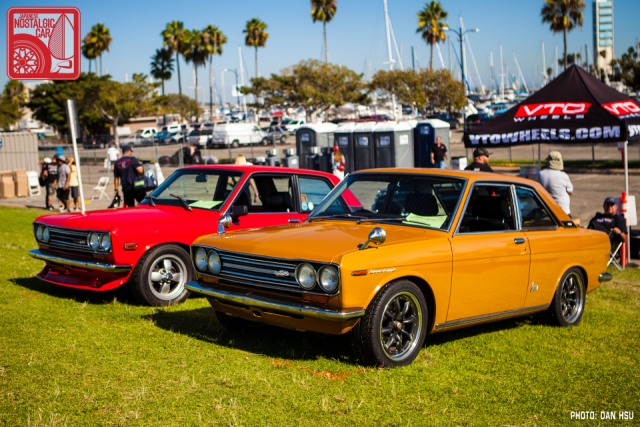 Moving onto other Nissans, Brian Holloway’s 1970 Bluebird SSS Coupe was emblematic of the breed, with a built top end, R160 LSD, and 280ZX front struts and brakes. 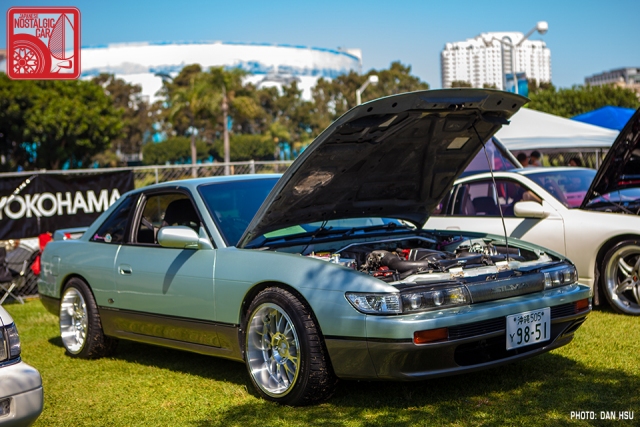 Similarly, Leeann Navarro’s 1988 Nissan Silvia, finished in the hero colors of two-tone green and gray, was another sports coupe defining of its time. 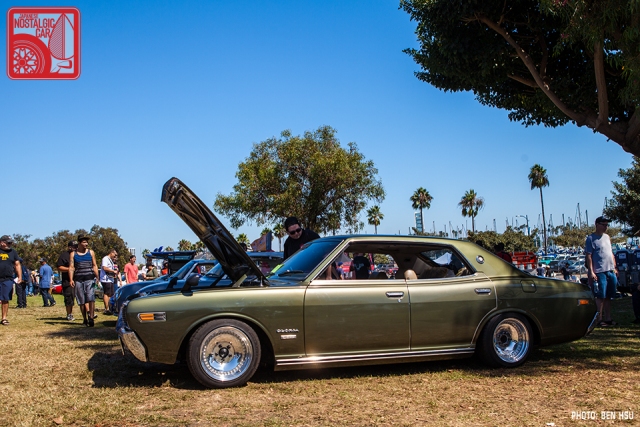 Adam Smith’s 1975 Nissan Gloria became an ideal car for the Japanese middle class in its day, just as the post-war economy entered its boom. It was truly a time of wealth for the nation.

Ricky Mena’s F30 Nissan Leopard is a predecessor to the Infiniti M30, and as our eagle eyed photog Ryan Senensky pointed out, it is probably one of the only cars to have its chassis code molded into a spoiler. 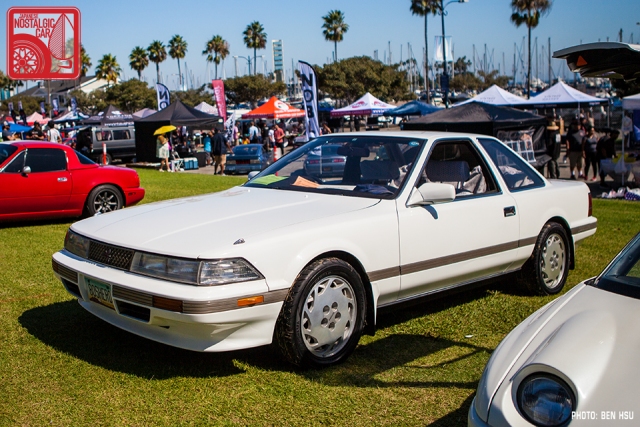 Toyota’s answer to the Leopard, a Z20 Soarer, symbolized the golden age of Japan’s Bubble Era. The super-luxurious GT was synonymous with affluence and Black Rain-style excess. 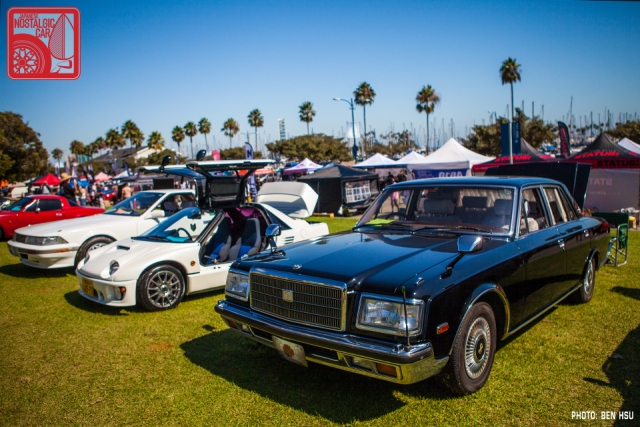 Of course, there could be no grander status symbol than the Toyota Century. Hans Strube’s ultimate VIP sedan was a brilliant example of understated Japanese luxury, and positively dwarfed the kei car parked beside it. 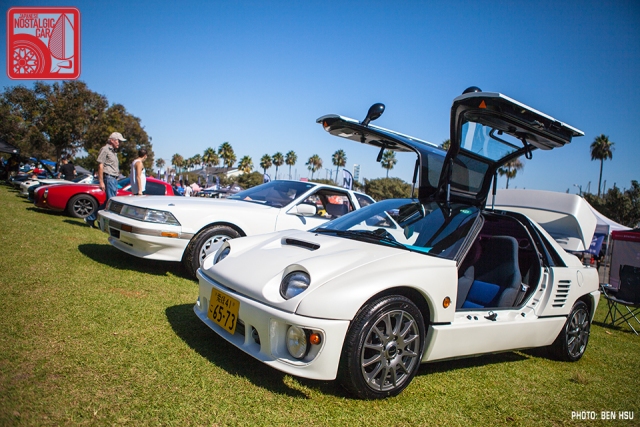 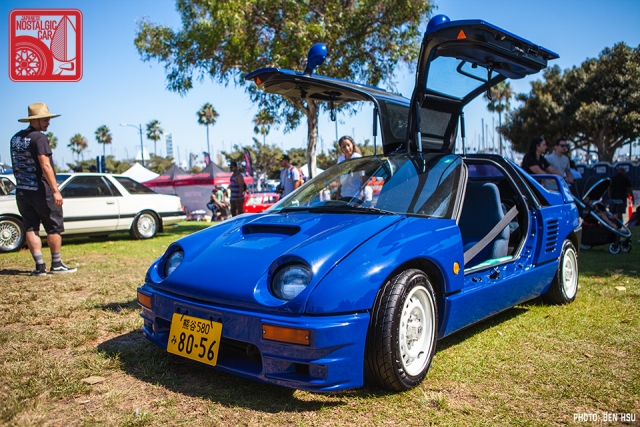 There were two Autozam AZ-1 kei cars at the show, both shining examples of the sheer enthusiasm of Japanese automotive engineers during the Bubble Era. Delaney Rindal’s white 1992 won third place in the JDM category, while Ashley DeLuca’s blue 1992 won first place. 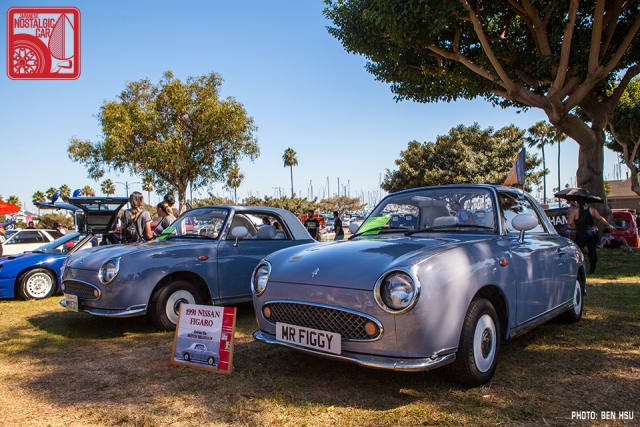 A pair of matching Nissan Figaros owned by Mitch Braiman and Sanford Doi lurked on the Marina Green grounds as well. Sanford’s (right) was awarded second place in the JDM class. 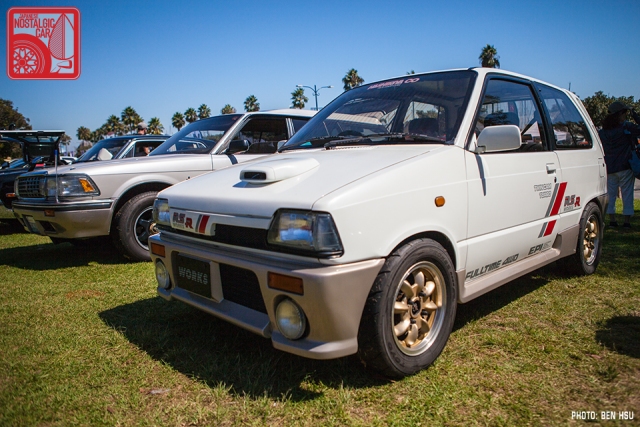 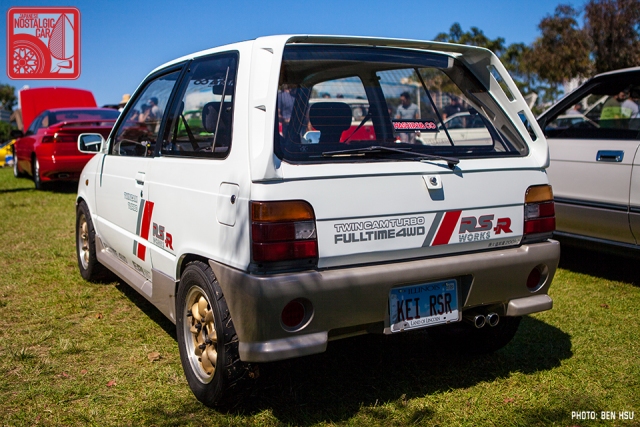 The lone Suzuki at the show belonged to Alexander Quiroz. His 1997 Alto Works RSR riding on Enkei Compe 8 wheels looked like a blast to drive, but we don’t need to remind you of the charms of this kei hero. 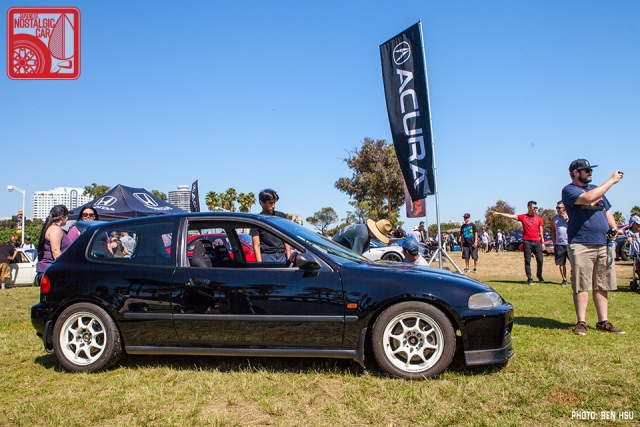 Incredibly, someone also imported an EG Honda Civic VTi, a mid-trim level with a slant towards performance, powered by a 1.5-liter SOHC VTEC motor with LSD. 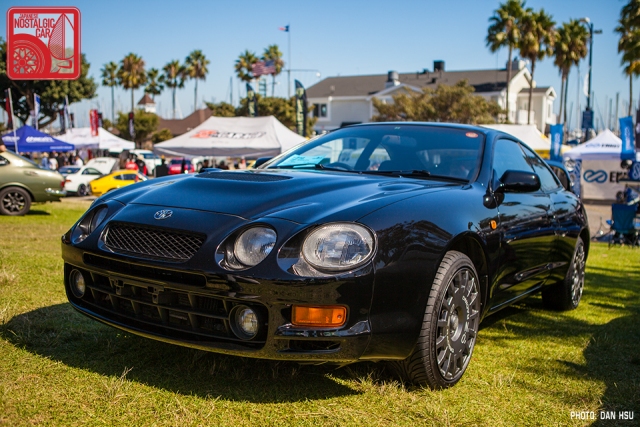 Finally, Lee O’Donnell’s 1994 Celica GT-Four was number 1,146 of 2,000 produced. Homologated for WRC, the turbocharged, AWD monster was famous for one of rally racing’s most famous cheating scandals. Lee took home a third place award in the Neo-Classic Toyota/Lexus class. While Skylines and oddball kei cars take the bulk of the attention,  it is absolutely fantastic to see a lesser-loved model imported and painstakingly cared for.