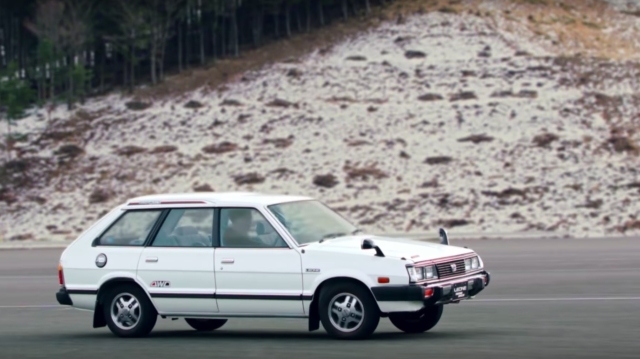 This year is Subaru’s 60th anniversary as a carmaker, its 50th anniversary in the US, and also the 30th anniversary of STI, so it makes sense that the company is going HAM on the heritage spots. In a span of a few days, Subaru Japan has released two completely different videos celebrating their history, but one is a bit more entertaining than the other.

The first, titled “Our Progress Never Ends” is actually a series of several shorter videos strung together. Each one has a different theme, such as safety or all-wheel-drive prowess, and shows various Subaru models over the decades exhibiting said theme.

The clips are really well produced, starting off with cars that appear to be from Subaru Japan’s own collection in action. If anything, it’s worth a view just to see a Subaru 360 under full bore acceleration. Then there’s footage of Leones fording streams Impreza WRXes tackling wet circuits, and even of boxer engines going into several generations of cars at the factory. Despite some fake graininess over some of the footage, it’s a well done series overall and tells a story.

The second video, titled, simply, “Subaru Heritage Video,” is a bit less creative. It shows a windshield view of a car driving through various landscapes while images of Subarus past float by like ghosts (or photos of ghost, at least). It’s the kind of video that you might see playing in the back of an auto show display, but it gets the point across.

Add in all the commercials featuring old Subarus that have been running on US TV and there’s more vintage Fuji Heavies on film than ever before. And with so much for the company to celebrate this year, we’ll likely see more.