VIDEO: Jay Leno drives a Toyota Century with blood in the trunk 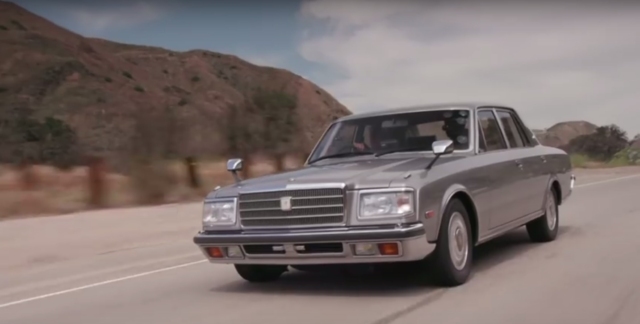 It’s the moment when Jay Leno is shown a blood stain in the trunk that he really warms up to the Toyota Century. Whether its really hemoglobin or not isn’t known, but Leno is clearly stoked to be driving what could be an ex-yakuza car. Leno says he’s always heard about the the “Rolls Royce of Japan,” but in the latest episode of Jay Leno’s Garage the former talk show host and car collector finally gets to drive one.

Before he does, though, Leno does what is proper for a true Century owner — sit in the back. There, he gets to play with all the cool features, like motorized curtains, a built-in tape recorder, and power reclining rear seats. What isn’t so proper, is when he sticks his dirty work boots through the wool-upholstered pass-through in the front seatback. How uncouth! Oh well, we can forgive that because Leno really seems to like the car.

permalink.
This post is filed under: Video and
tagged: century, jay leno, toyota.

6 Responses to VIDEO: Jay Leno drives a Toyota Century with blood in the trunk