VIDEO: Akio Toyoda travels through time to talk to his grandfather Kiichiro 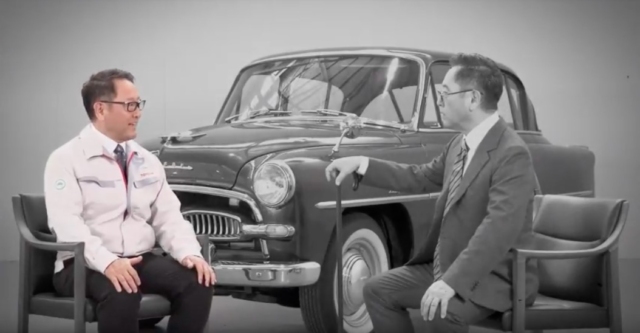 Apparently, in addition to making cars, Toyota has taken its substantial profits to invent and build a time machine so that its current president, Akio Toyoda, could go back to the 1950s an interview his grandfather, Toyota Motor Corporation. founder Kiichiro Toyoda in a cringeworthy video that basically gets the one car in it completely wrong.

That’s because the Crown in it was introduced in 1955, whereas Kiichiro Toyoda died in 1952. I suppose if you can build a time machine you can build one big enough to fit a Crown, though. Also, since this video was made for Kiichiro Toyoda’s induction into the Automotive Hall of Fame, which is located in Dearborn Michigan and began as a celebration of Motor City’s influencers, much of the discussion centers around Toyota’s relationship with America. Watching Toyoda play both himself and his grandfather is uncharacteristic of a big CEO, though, but he should probably stick to his day job and leave the acting as a side hustle.

1 Response to VIDEO: Akio Toyoda travels through time to talk to his grandfather Kiichiro