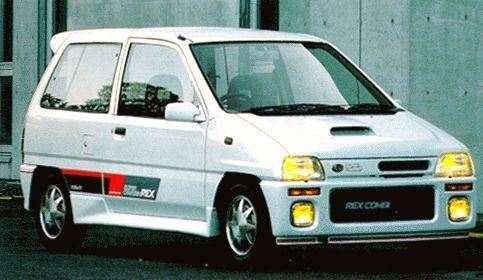 The Subaru Rex Combi VX Supercharger was introduced in March 1988, and along with it came a snazzy new ad campaign. The addition of a supercharger to the 550cc kei hatchback boosted output from 36 to 54 horsepower, which doesn’t sound like much but was a 50 percent increase in a car weighing 590kg (1300 pounds). It also had a fairly advanced (for its time) electronic fuel injection system, three valves per cylinder and a CVT automatic decades before they body snatched Nissan’s entire lineup.

It quickly became the flagship model for the Rex nameplate. For some reason, Subaru’s marketing department thought George Michael’s “Faith” would be the perfect song to which a zippy little kei jidosha was introduced and the attributes of the continuously variable transmission explained. Somehow, though, it all works. RIP George Michael, and may you enjoy “dancin'” with your Subaru Rex in the great beyond.

Special thanks to Hideki K.

permalink.
This post is filed under: Tune Up and
tagged: kei, rex, subaru.