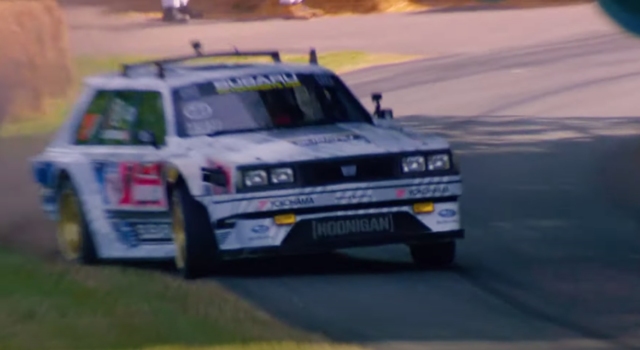 Subaru has released a short film about taking their 1983 Subaru GL Wagon to the Goodwood Festival of Speed. The 15-minute video goes behind the scenes and into the mind of driver Travis Pastrana as the team set out to claim the top time at the Festival’s hillclimb. Though the car has about as much in common with an original GL as a NASCAR racer does with a stock Mustang, it’s still great fun to watch a vaguely 1980s Subaru wagon-shaped object hurtle with that much speed.

Pastrana seems like a chill dude, even when he’s manhandling a GL Wagon Frankenstein’ed with a WRX STI powertrain through walled blind corners that have absolutely zero runoff. This is also likely the only official Subaru promo in which you’ll also see a rotary-powered S15 Silvia and Calsonic R32 Skyline GT-R. In any case, after seeing what Pastrana’s Subie is capable of, the next Gymkhana video should be a pretty entertaining watch.