Toyota ads have been pretty lame for a while now but if they asked us how to make one, their latest new ad is exactly how we’d do it. The Big Three have been leaning into their heritage for decades to sell their pickups. Toyota, on the other hand, has been slow to capitalize on one of the greatest 4×4 histories in the automotive kingdom. This commercial for the 2022 Tundra changes all that. 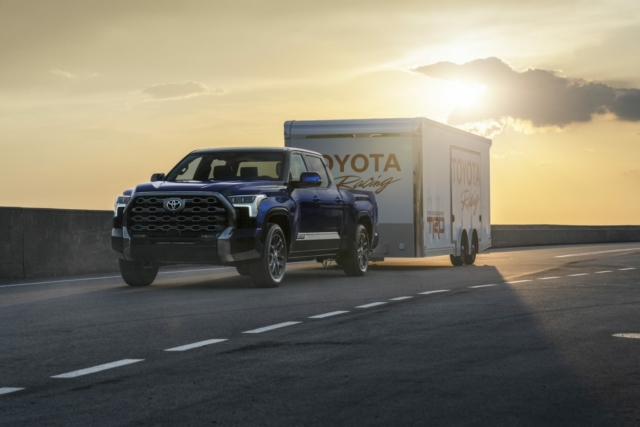 As you may have heard, over the weekend Toyota unveiled a grille with a pickup truck attached to it. The 2022 Tundra is the first all-new full-size truck from Toyota since 2007, and shares more than a few things in common with the new J300 Land Cruiser. Both use a version of the same 3.5-liter turbo V6 to replace their outgoing V8s, and both are built upon Toyota’s modular truck platform, which gives us some hope that the Cruiser will eventually be revived here. Anyway, on to the ad.

The spot opens to a Fury Road dust storm that acts as our portal in time. A first-generation 4Runner emerges from the cloud paired with buzzing off-road motorcycles to represent the 80s dirtbike trend. Next it’s off to the savannah where a rhino runs alongside an FJ45. We jump forward in time to a snorkeled FJ Cruiser charging through a blizzard, then a second-gen Tundra plowing through a wildfire (sadly, an all-too-recognizable scene nowadays).

We skip to another Tundra towing a space shuttle, something that actually happened, then the Tundras that have dominated NASCAR’s truck series. The next one is the first real easter egg of the ad, a black HiLux with KC Daylighters and the license plate MCFLY. It makes us wince to see it slam into a sand dune, but the transformation into a Australian J70 Land Cruiser is pretty cool. Of course, no stroll through Toyota truck history would be complete without a TRD tricolor Baja racer, and the ad delivers. The last shot is of the new 2022 Tundra arising from the storm.

It’s a great ad, one that makes me, a Land Cruiser owner, excited about the brand, something that Toyota’s cars have not done in many years. Even the tagline, “Born from Invincible,” builds on the one thing everyone knows about Toyota trucks — that they’re indestructible. Why it took Toyota so long to do that we have no idea.

As we’ve said many times, the main source of enthusiasm for the Toyota brand these days isn’t around cars like the Supra. It’s behind the Land Cruisers, 4Runners, and Trucks that have simply done their jobs by lasting longer than anyone expected. It’s good to see Toyota finally embracing that.

UPDATE: We’ve been informed of another Toyota truck ad that has a bunch of pickups of different vintage. It’s not as explicit as the one above, but still worth a watch:

permalink.
This post is filed under: cm and
tagged: 4runner, back to the future, hilux, J40, land cruiser, N60, toyota, tundra.