If you were around in the 70s and 80s, you probably have vivid memories of neat little campers built from Toyota HiLux pickups. The compact motorhomes were an official Toyota product, sold at dealerships and borne of a partnership between the Big T and the Chinook Mobilodge Company. Now, Toyota is paying tribute to those mini-RVs with a new project using a Tacoma as a foundation.

The Toyota-Chinook collaboration began in 1973 with a model initially named the Toyota Round Tripper. Sold at select Toyota dealers, they were marketed towards travelers who wanted an RV but didn’t want a gas-guzzler. Previous Chinook conversions used full-size Chevy or Dodge vans as bases, but the oil crisis had quickly changed American tastes. Highway fuel economy reportedly ranged between 25 and 29 mpg, and the trucks met California’s strict emissions standards of the time. Prices started under $8,000, which would be the equivalent of about $50,000 in 2021 dollars. That’s an extremely competitive price, especially if it means you don’t need a mortgage. 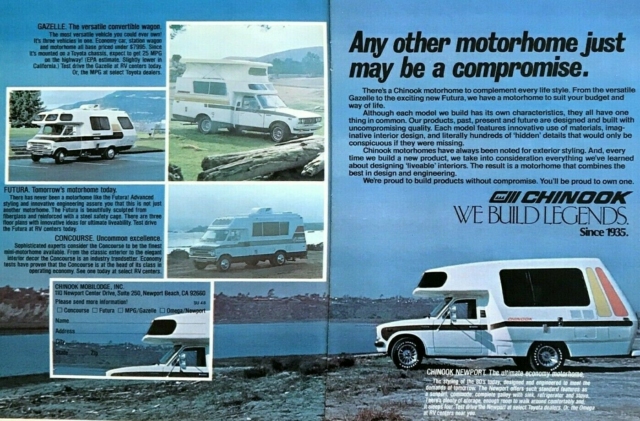 Chinook designed many campers for used with Toyota pickups over the years, often using different names for nearly identical models. To us, the model that the Tacozilla resembles most is an Omega or very similar Newport. When the partnership with Toyota ended in 1978, Chinook renamed the model the Gazelle and continued to sell it on their own.

In a newly uploaded video Toyota introduces the Tacozilla. We’re not sure the name really fits a retro camper — it seems more appropriate for a monster truck or something — but the project is undeniably cool. The custom shell sleeps two in the windowed extension above the cab. It comes with its own dining table and a very cramped kitchen that’s located, like some of the Chinooks of old, right across from a chemical toilet.

Unlike the orignal Chinooks, which were built on 2WD HiLuxes, the Tacozilla is based on a 4WD Tacoma AccessCab. The build team apparently plans to lift it and fit all-terrain tires under it for some off-road chops. They even point out that the camper was shaped to reduce rear overhang, something the Chinooks had in spades. Faithful to the 70s zeitgeist, it features a manual transmission and awesomely retro brown and orange stripes.

The Chinooks were hugely popular for their time, especially on the West Coast. According to some historians, Toyota ordered 10,000 of these mini-RVs, and because they used 18R and 20R engines, they soldiered on long after their expiration dates. You can still see battered examples all over southern California today. Sightings are far more common than those of cars which sold in greater numbers, like Celicas or rear-wheel-drive Corollas. Whether because of their practicality or durability, or both, they’ve just kept on truckin’. We look forward to seeing the completed Tacozilla at SEMA.

permalink.
This post is filed under: Next Version and
tagged: Chinook, hilux, RVs, tacoma, toyota.