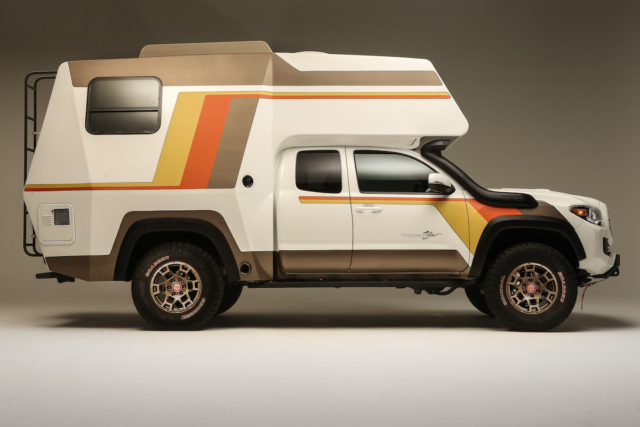 Toyota has revealed its incredible Tacoma-based Tacozilla, a retro mobile home based on the Chinook campers of the 1970s. Unlike the Chinooks of old, which were mostly fitted to 2WD pickups, the Tacozilla rides on a 4WD Tacoma TRD Sport chassis for overlanding. The result is impressive, even if it makes many concessions to style over practicality.

The truck wears a host of TRD parts, including a full suspension, skid plate, and tidy little snorkel. The exhaust had to be re-routed to fit the camper, and it now exits right behind the rear cab, in front of the rear wheel. The fuel filler had to be rerouted as well, and is isolated from the camper to avoid fumes. 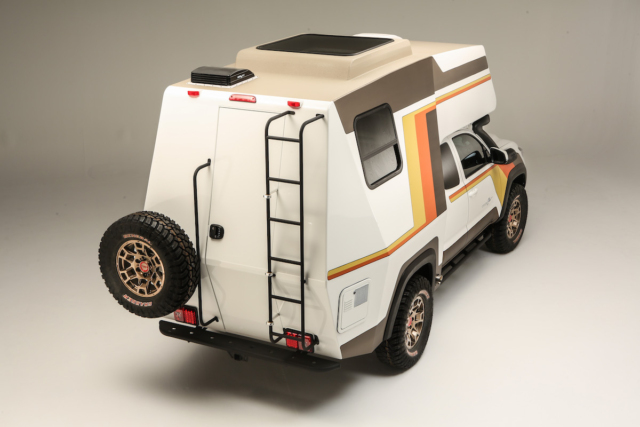 The most amazing thing about the Tacozilla is its aluminum framed camper shell. The shape is entirely custom, meaning every single angle and rounded edge had to be fabricated and welded. Just that sharply angled rear door is a feat in itself. It’s tall enough for a 6-foot person to walk through, and there’s an open pass-through section to get to the driver and passenger seats. The rear overhang is much shorter than that of Chinooks, mostly because a rear overhang would impact its off-road abilities. 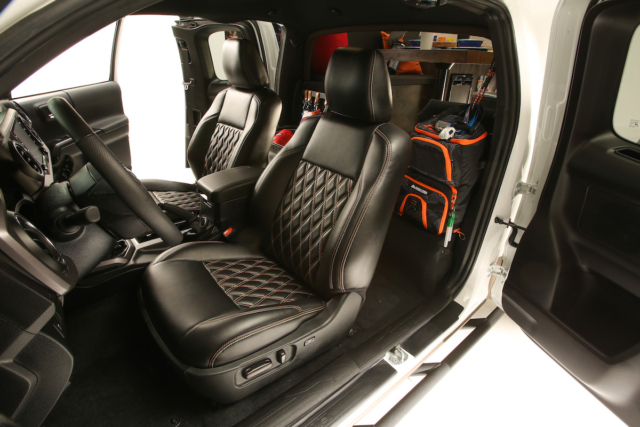 Inside there’s a sleeping section for two above the cab and a nifty Lexan skylight for stargazing. The lower section houses a leather bench on either side with storage beneath and a tiny removable dining table in between. The wood floor appears to be teak (good for water resistance) and flatscreen TV hangs from one of the walls. 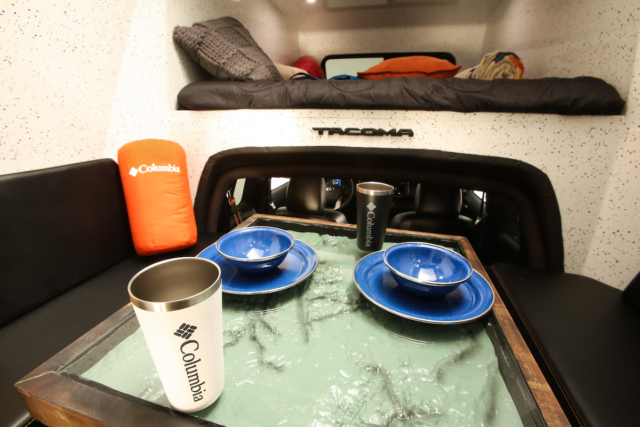 A small kitchen area at the rearmost passenger side has a sink, stove, and fridge. There’s even a window above the sink so you can have a view of the outdoors as you prepare dinner. Across from the kitchen is a private bathroom (in that it has a closing door and walls) with a tiny toilet.

However, in the end this is a show car, and if you really wanted to build a hard-core overlanding rig there’s a few other considerations to ponder. First, you’d probably want an auxiliary fuel tank. The stock Tacoma comes with a 21.1-gallon tank and returns about 20 city/23 highway mpg. We’d guess the added weight and aerodynamic penalty of the camper reduces that by quite a bit. To get to some truly remote areas, you’d want some extra capacity there, and possibly a diesel engine to begin with.

The dual battery setup is decent, but a rooftop solar panel would be a good idea if you didn’t want to worry about draining them. A system that showed each battery’s remaining charge would be handy as well. You’d probably want somewhere (ideally accessible from the outside of the vehicle) to store tools and an air compressor too.

The dining table is too bulky and when you remove it there’s no place to store it. It would be nice if the benches folded out flat for additional sleeping surfaces. There should be a way to secure storage areas so your pans and dishes don’t rattle, and locking doors (bathroom, fridge, drawers) would be useful so they don’t fly open as you’re off-roading. And, if you’re heading into the wilderness windows in the camper section should have shades and insect screens too. Lastly, a shower (with additional water storage) would probably prove convenient. 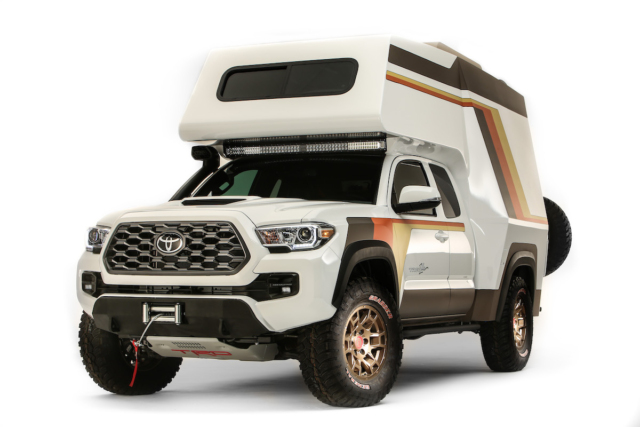 Many of these things could be added onto the Tacozillaa to make it an even more formidable overlander. For some truly apocalypse-ready Toyotas, check out German company Maltec’s Land Cruiser conversions. Of course, those don’t have the cool throwback look or the interesting history of the Chinook campers so there is a trade off.

In California we still see plenty of original Chinooks roaming the streets. The bodies are usually falling apart, but their 18R and 20R engines trundle on undeterred even after decades of hauling around a small house. There’s no chance the Tacozilla makes it into production, but in the end it’s an excellent SEMA that evokes memories of the cool things Toyota has done.

permalink.
This post is filed under: events and
tagged: Chinook, sema, tacoma, toyota.