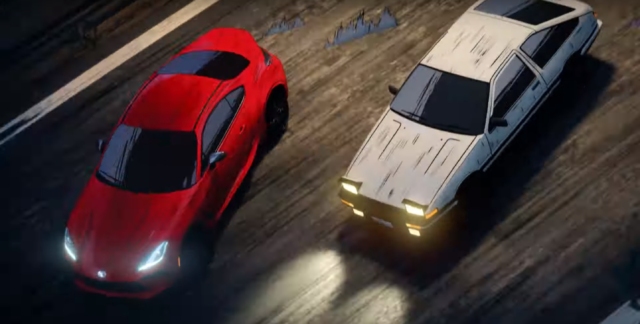 We promise we are not turning into an Initial D blog, but this was too cool not to share. We’ve not been shy about crapping on Toyota’s terrible ads before. So consider us flabbergasted that the same company, just before the holidays, quietly released one of the greatest car commercials we’ve ever seen to shill the 2022 Toyota GR86.

In fact, it’s three ads that are inter-connected and tell a tight little story in just 45 seconds. In the first chapter, “Mastering the Craft”, a lone panda AE86 drives down a dark two-lane road at night. It’s a familiar scene, and as the camera cuts to the interior we see that the driver, in his trademark plain white T-shirt, is none other than Takumi Fujiwara.

Just as he settles in for some touge footwork, another car appears in his rear view mirror. Takumi wasn’t alone after all. A red 2022 Toyota GR86 closes in fast. “To be continued…” appears on the screen. Eurobeat intensifies, and we know some epic drift action is about to take place.

The second chapter, “Pursuit”, tells the same story from the mysterious GR86 driver’s point of view. We see him get in the car and chase down Takumi’s AE86. The animation style is at once familiar and turned up to 11. There’s adrenaline-boosting camera angles, closeups of the driver’s eyes in intense focus, and brilliant depiction of the cars’ movement.

The cuts are much faster than in Initial D, the animation is quicker and more lifelike, the lighting is unreal (in that it is extremely realistic). Technology has progressed since the last movie was released in 2016. To keep the animated feel, though, manga elements like large katakana sound effects float above the cars. It’s as if the comics are coming to life.

In the third and final chapter, “The Challenge”, the GR86 manages to overtake Takumi’s AE86. Who is this driver that can out-maneuver Gunma Prefecture’s greatest wheelman? At a stop light, the drivers finally come face to face. As the GR86 rolls down its window, we see that the pilot is Keiichi Tsuchiya, the Drift King himself.

Obviously Tsuchiya was never in Initial D, but his animated presence is another nod to the enthusiasts who fondly remember the early days of drifting. As Takumi looks on, you can even see the famous cup of water sitting in his clip-on cupholder (though we know that in 2022, the AE86’s vent slats would never be strong enough to hold the weight of a paper cup containing water). 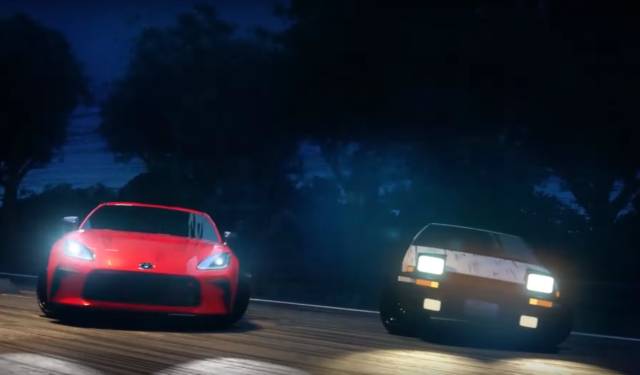 What’s even more amazing is that all the dialogue is in Japanese. And yet, the spots were clearly intended for an American audience, given the English voiceover at the end. In a country where people are so loath to read that, no matter how good the film, subtitles might as well be a box office death sentence, it’s almost unthinkable. As far as we can tell these ads have never aired on TV. They should, though. Imagine the image of these animated cars screeching onto your flatscreen during halftime. It would be unlike any other car commercial of the past decade. 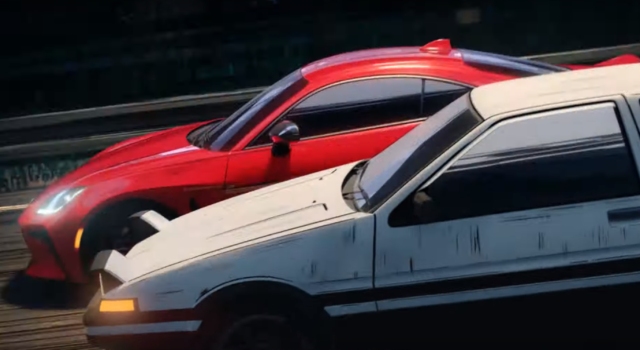 So I guess we can’t really keep calling Toyota’s ads terrible any more. With the recent Tundra ad and now this, Toyota’s marketing people apparently “get it” now. We don’t think these ads have aired in Japan, even though they would tie in so perfectly with the recent MF Ghost anime announcement.

Most importantly, though the ad has to sell cars. And these do a great job of conveying the type of car the GR86 is supposed to be. Every damn commercial shows vehicles powersliding through the desert, claiming to be fun to drive, even when it lacks one shred of performance credibility. This, on the other hand, is a love letter to enthusiasts. It lets the GR86’s intended audience know that, even in the sea of Priuses and RAV4s, Toyota has not forgotten us. Bravo, Toyota, bravo.