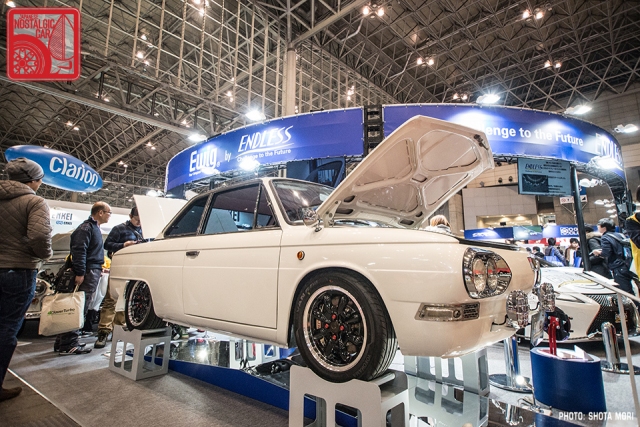 One of the benefits of the growing interest in Japanese classics is that aftermarket companies are producing an increasing number of parts for the cars we know and love. One of the leaders of this movement is Endless Advance, the Japanese maker of performance brakes. At the Tokyo Auto Salon earlier this month, they showed off their ever-expanding catalog of brake system bits with a raised Hino Contessa in one of the most eye-catching displays of the show. 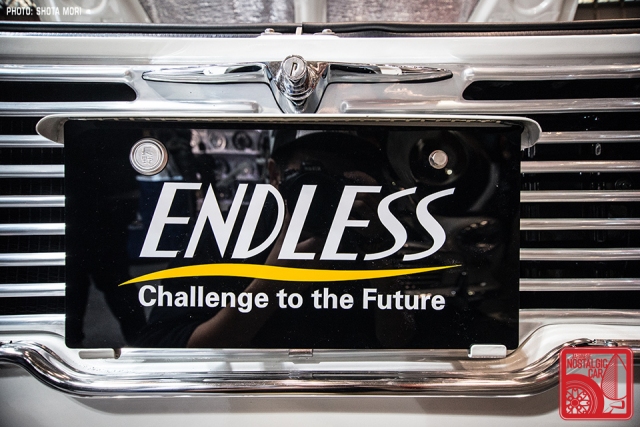 If you’ve been immersed in the tuner world since the Battle of the Imports days, you might remember Endless’s high end brake kits as a must for any “JDM” build. Or, you may recognize their dark blue livery gracing Skyline GT-Rs in JGTC. The brand was and still is a staple of Japan’s motorsports and tuning scene.

More recently, however, the company has been leading the charge when it comes to fitting classic Japanese cars with stopping components. In 2016, they displayed a Toyota Sports 800 with Endless brake parts at Nos2Days. Last year, they followed that up with a Toyota Publica and Prince Skyline BLSID3 at the Tokyo Auto Salon. 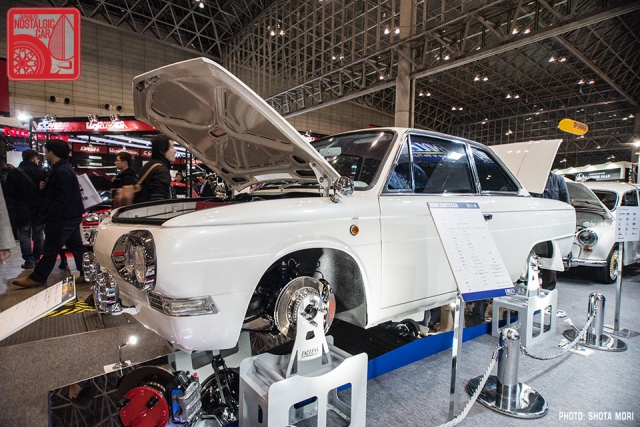 This year’s show car was a beautifully built 1965 Hino Contessa Coupe, a rear-engined icon of 1960s Japan from the days before Hino abandoned the passenger car market to focus on heavy-duty trucks. 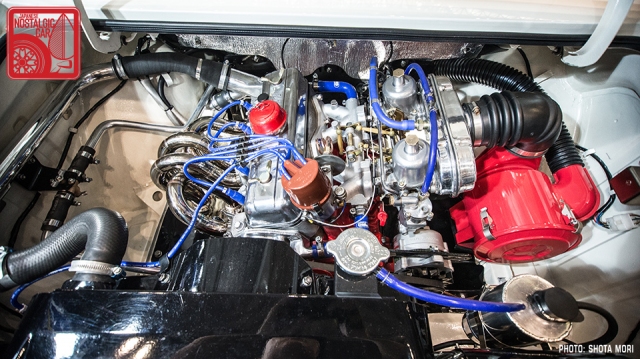 Before we get to the brakes, let’s take a moment to admire the stunning restoration of the Contessa. Its 1.3-liter inline-four originally made 65 PS, but with high-rise headers and custom exhaust the current engine might sound a bit more raucous. 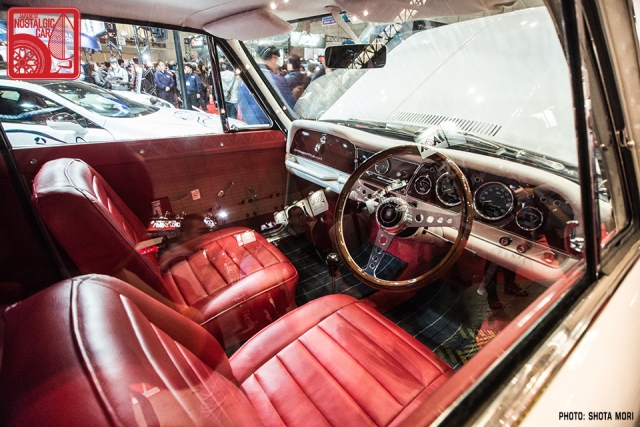 The interior was more functional than original, with a classic Nardi steering wheel, a re-padded dash, and newly upholstered seats. The door pulls were replaced with a small strap befitting of a 1960s club racer. The white-on-red contrast was quite stunning. 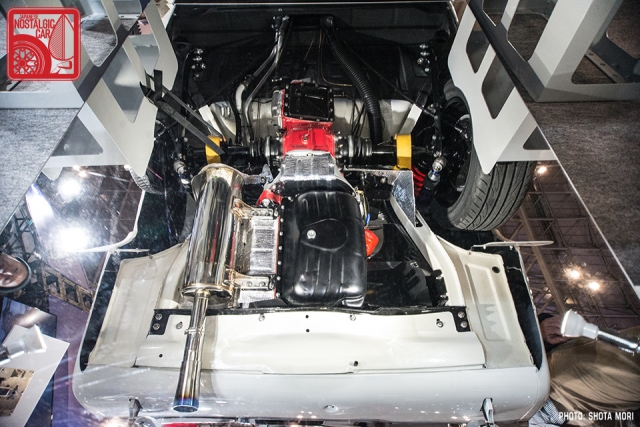 Underneath, the detail of the restoration was shown in its full glory. Endless-supplied springs and shocks aren’t stock, nor is the modern Yokohama rubber, but Hino Contessas are known to be kept alive as vintage racers by a small cadre of Japanese tuners. 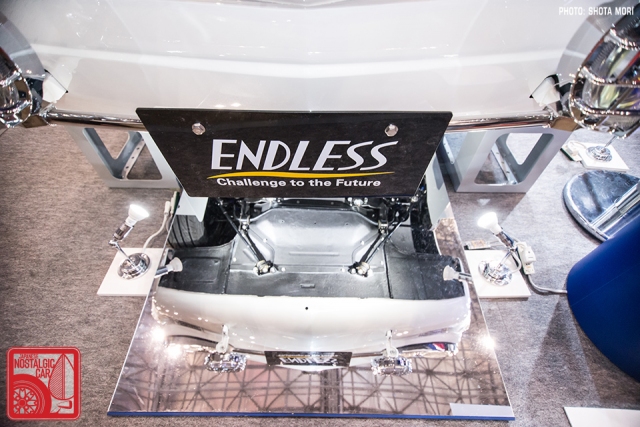 By contrast, the underside of the nose is almost completely barren. There are no cooling paths, as the radiator is rear-mounted and all cooling air is taken in through a grille that spans the rear. 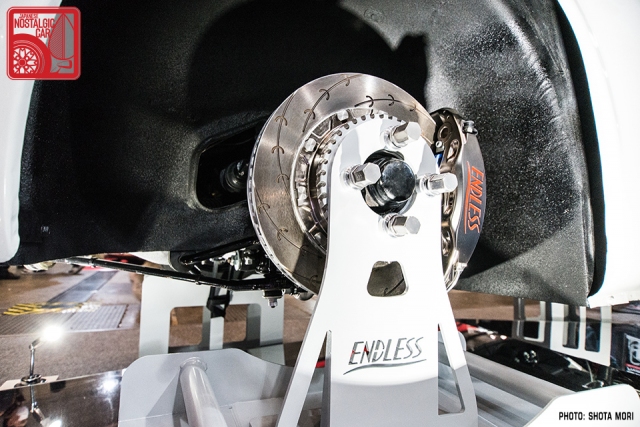 While the build was beautiful, the focus of the display was the stuff behind the wheels. One of the biggest fears about driving a kyusha at modern traffic speeds is whether ancient brakes will hold up during stopping, turning, and repeated stop-and-go conditions.

Endless’s solution is an upgraded braking kit, with two 298mm-diameter front discs featuring Endless’s unique E-Slit pattern that is said to keep the pads in optimal shape. Those pads are the MX72 model, for street and track day use, while the calipers are Racing Mono4 4-piston units. 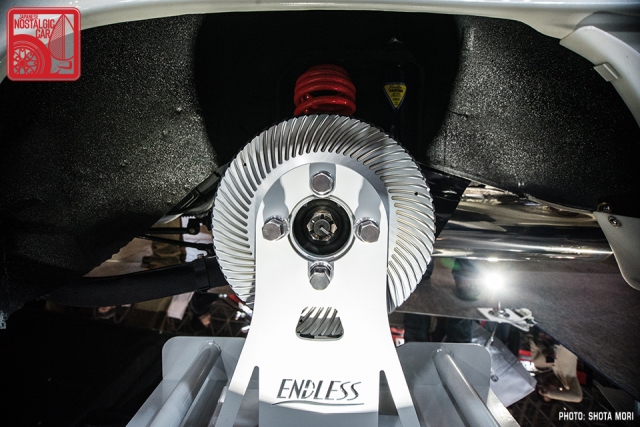 Perhaps even more stunning were the rear drums, custom-made units with a beautiful radiating cooling fins. These are not production-ready and as of now are one-offs made for this Contessa. Endless says the cost of making these will probably make them too expensive for production, but they have aftermarket brake shoes for improved rear drum performance. 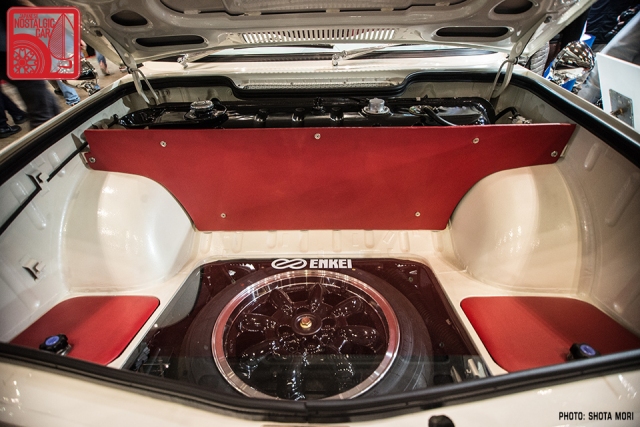 The cost for the front disc kits is about ¥300,000 (USD $3,000), which is not cheap, but Endless says it will work with customers’s specific needs regarding the make and model of both the car and the wheels. In this case, the Contessa was wearing newly released Enkei All-Eighteen Compes in a custom black spoke with polished lip finish. 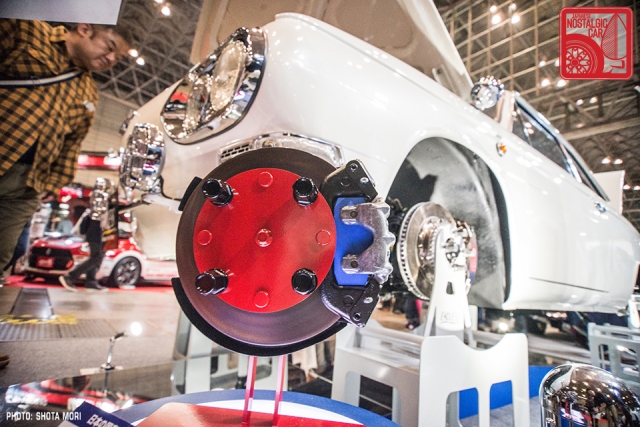 Endless even displayed an original Akebono unit next to the car, for contrast. There is no reason why the brakes seen on the Contessa can’t be adapted to any vintage car, though a custom caliper mounting bracket may be required.

So why was the the Hino Contessa chosen as a show car? Despite a few vintage racers, there still aren’t many owners seeking to modify their Contessas. The answer, it turns out, is quite simple. The Hino Contessa was the first Japanese car to come with disc brakes.