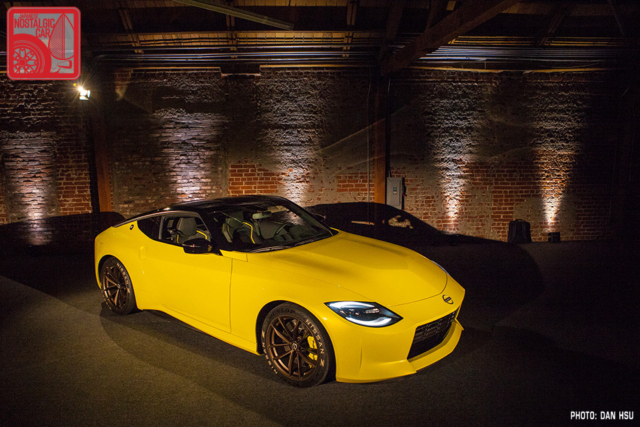 After what seems like an eternity Nissan is finally giving us a new Z. The Z Proto concept that will was revealed last year has gotten many of us here at JNC excited about the seventh-gen Z, and many fans have expressed to us their excitement as well. A while back Nissan granted us an opportunity to see the Z Proto in person, and what we saw is quite promising. 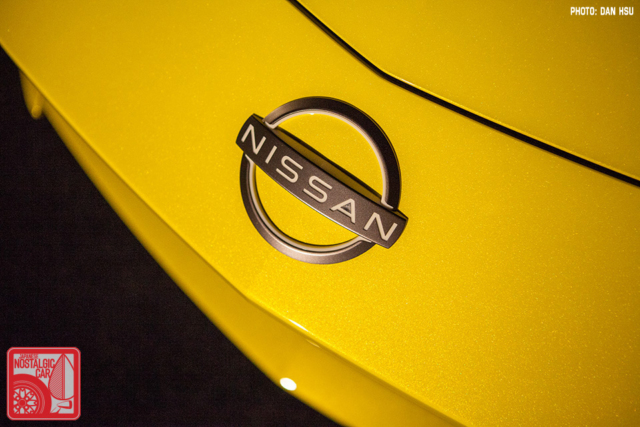 First of all, the car is very striking in the sheetmetal. There will be no mistaking this car for anything other than a Z, yet it brings the design into the modern era while somehow also managing to throw in more than a few heritage cues. In photos, some angles make the car look awkward, and the biggest criticism has been of the large front grille. 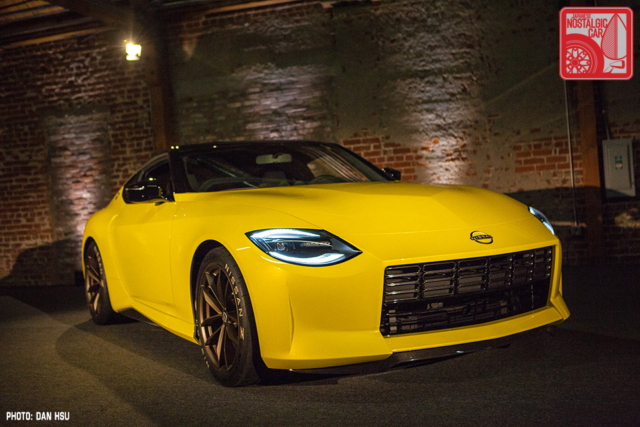 What looks like a giant opening in photos actually hides a two-tiered grille. It’s reminiscent of the S30 Z, and if you take the front bumper off of a 240Z, you’ll see a similar rectangular grille. Of course, the S30 Z had a chrome bumper splitting the opening in half so it didn’t look so big, but Nissan isn’t going to put a chrome piece of steel on a modern car. So, they bisected the grille by giving it a different pattern on the top half than on the bottom half. 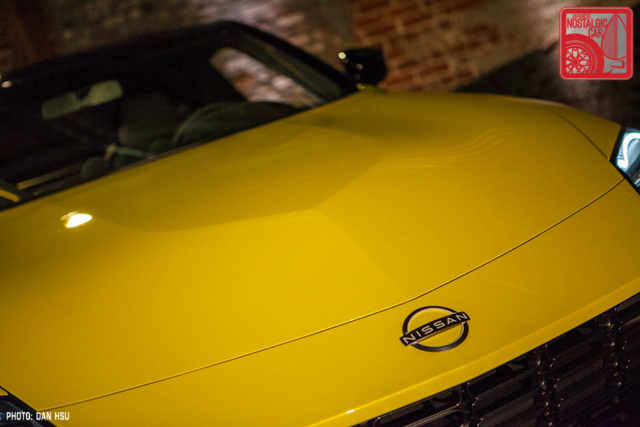 The pointed nose and power bulge on the hood are pure S30 Z. Again, in some angles under bright sun that hood surface gets washed out and looks flat. However the shape is actually quite prominent, and in this closeup you could be forgiven for thinking this was an actual S30 Z. It’s one of those great details that you don’t notice the full effect of until you really get up close to the car. 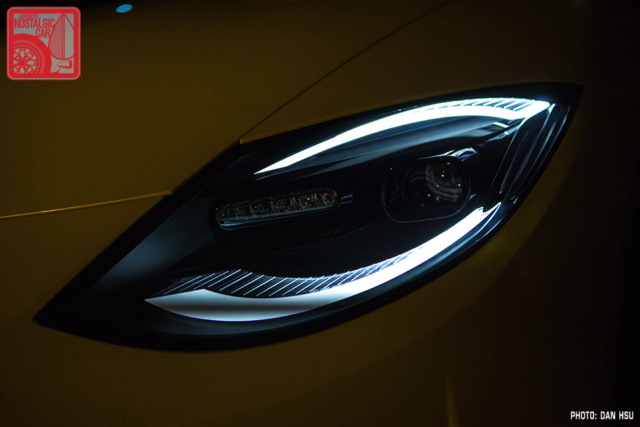 The headlights do a great job of evoking the S30 Z while allowing for modern lighting. Again, Nissan was not going to slap recessed headlights on a modern car, so the designers used the 240ZG as inspiration. The lighting elements mimic the shape of the light reflecting off of the G-nose’s clear headlight covers for an excellent throwback cue. 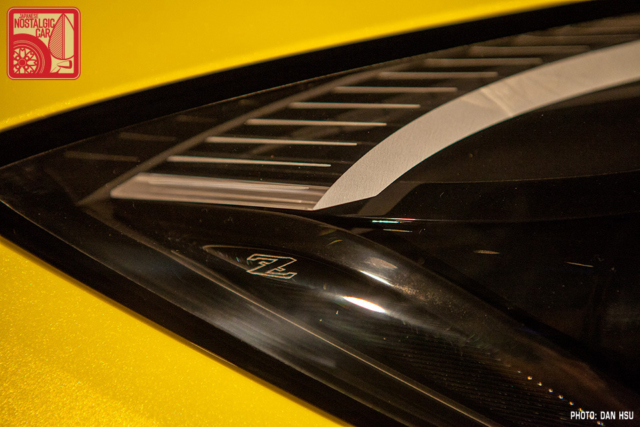 The headlights even have a small easter egg hidden in the lens. Even in person, this is very easy to miss. If you look closely you’ll see a small etched Z logo, in the same font as the 240Z’s original emblem’s. We don’t know whether this will make it to production, but it’s a cool nod to the game-changing sports car that started it all. 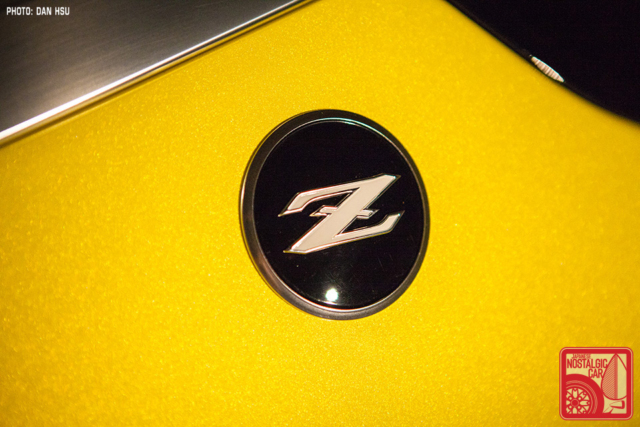 That Z logo is also repeated in a circular C-pillar badge, another throwback to the original. This badge will be making it into production, and in our opinion looks better than the techno Z with the three squares along the diagonal. 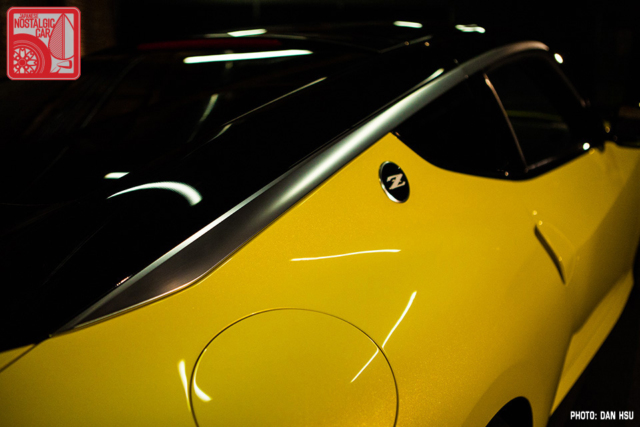 Nissan likened the silver strip that runs from the from the top of the A-pillar to the trunklid to a katana blade. However, 240Z owners might recognize it as a being similar in shape and placement to the S30’s drip rail. Nissan hasn’t officially made this connection, but it seems too perfect to be a coincidence. 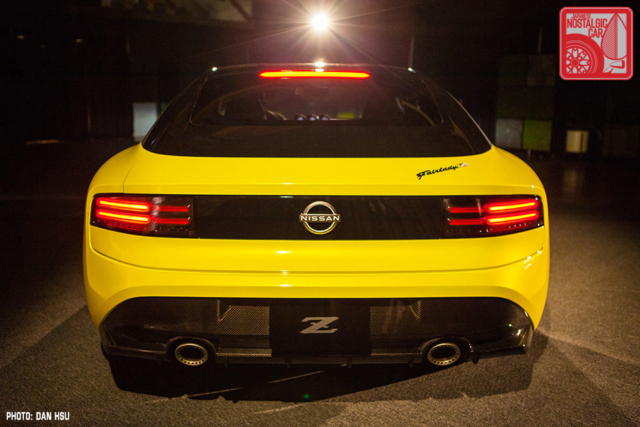 The rear is dominated by the much talked about Z32 taillights. The twin radiused rectangles on either side are a direct nod to the fourth-generation cars. However, we’re glad the rear isn’t 100 percent Z32. the black strip that spans between the lights could be a call-out to the S30 or the Z32. It references both equally in our opinion, and should give the Z an instantly recognizable rear end when you spot one in traffic. 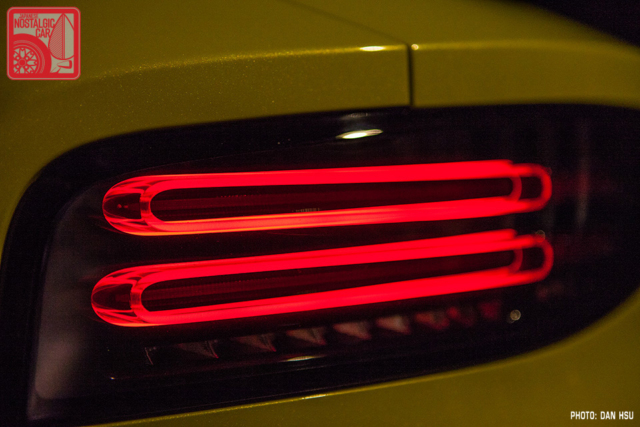 Look closer and you’ll that the rounded rectangles are the same shape that’s repeated in the grille. It’s a way to tie the front and rear together since they do reference two generations decades apart. 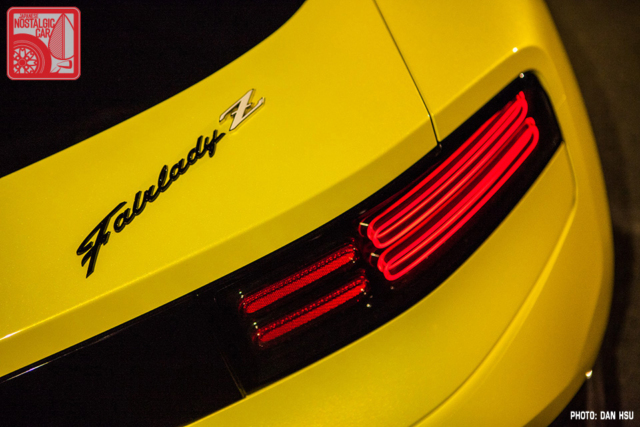 On the decklid itself there’s a throwback Fairlady Z badge on the Z Proto, but we can’t imagine this will make it to production on US models. Still, the angled orientation of the badge and the script typeface is something that any Z-car enthusiast will recognize. 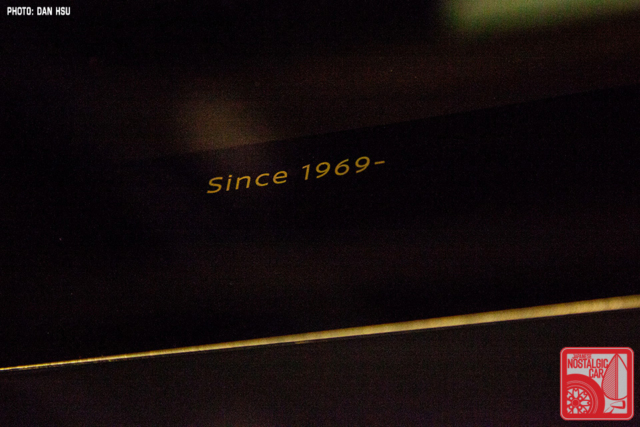 Another detail that we would have never noticed without seeing the car in person is this “Since 1969” etched into the rear glass. It’s a recognition of the Fairlady Z and 240Z, which debuted in October 1969. We’re not sure the dash was necessary, but we get that Nissan is trying to say the Z still has a future. This is a detail that we’d guess probably won’t make it into production. 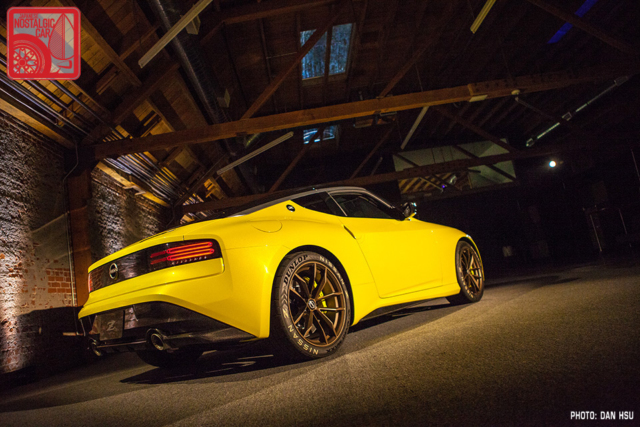 Overall, it’s apparent that the car is a heavily re-skinned 370Z. The proportions, pillars, and roofline give it away. Furthermore, peeking under the body shows 370Z suspension arms and mounting points. This is not necessarily a bad thing, as the Z34 has a proven chassis with plenty of aftermarket support. The things that were lacking on the long-in-the-tooth 370Z, like more power and modern conveniences in the cabin, should be addressed emphatically by the Z35. 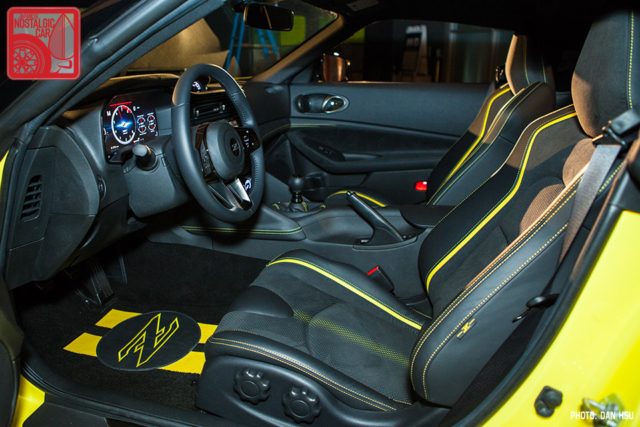 We had the rare opportunity to climb inside the Z Proto, and we’re happy to report that the interior has been thoroughly updated. The last 370Z we drove, a 2020 model, didn’t even have Bluetooth. Parts of it are clearly recognizable as 370Z, like the door handles and the center console. 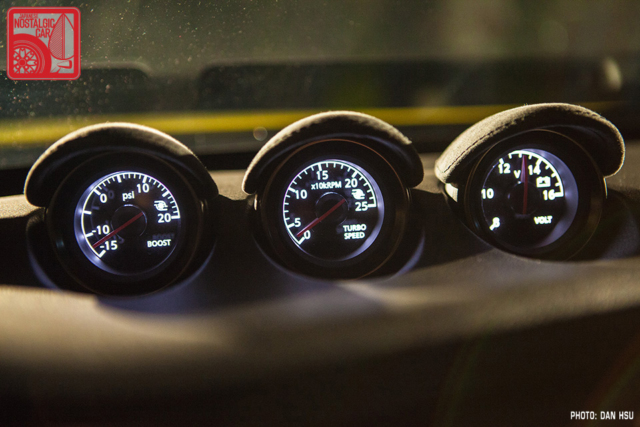 The dash retains the three pods that trace their design back to the S30. We’re still not crazy about the hats on top of each housing and would’ve preferred enclosed gauges,  but at least the rectangular clock awkwardly forced into a round bezel has been replaced with an actual useful information like boost pressure or turbo rpm. 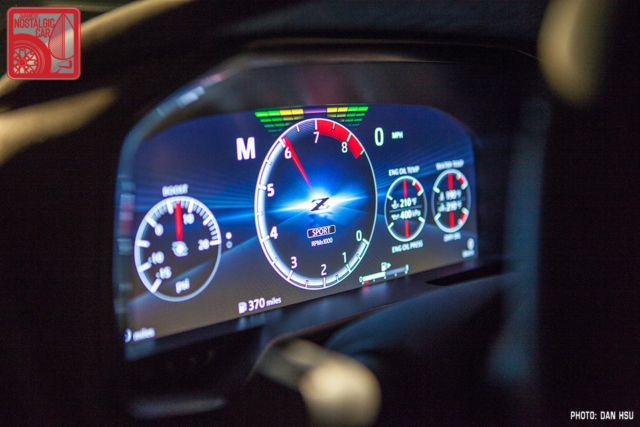 The instruments are fully digital, but most modern cars are these days. We’d prefer if the display looked a bit more traditional, though. Here’s a free idea for Nissan: program the display with selectable skins that mimic the instruments of each generation of Z. Then you can pretend you’re driving the Z of your choosing, whether it’s a classic 240Z or a Z31 with 80s digi-dash. 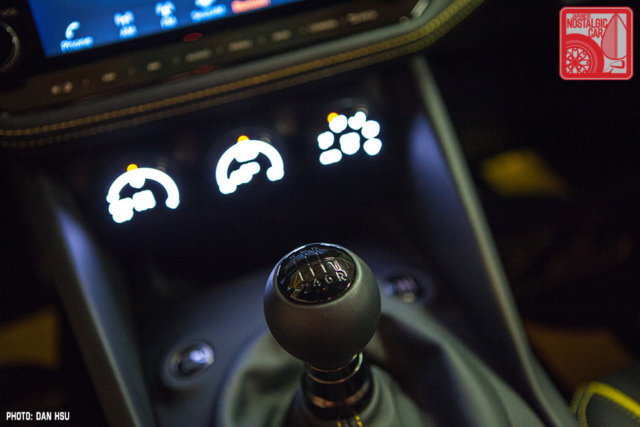 The most important part of the interior lies in the center — the 6-speed manual shifter. We’re honestly shocked that Nissan didn’t decide offer only a paddle-shift or dual-clutch transmission. An auto will be offered, of course, making the stick seem anachronistic in today’s market, but at least Nissan’s listening to enthusiasts. 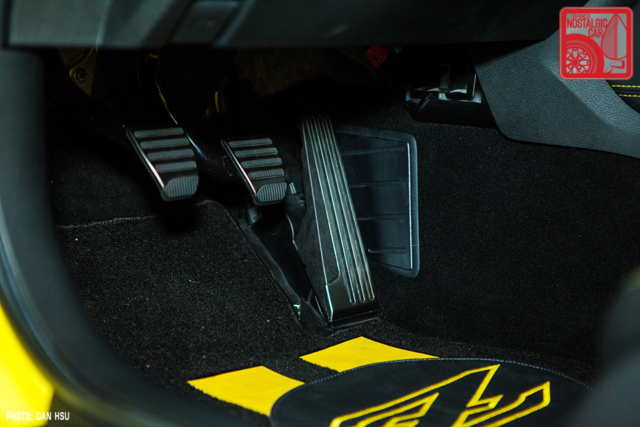 We’re not crazy about the garish floormats, whose twin stripes remind us of a Pep Boys special circa 1998, but that’s easily rectified. The three pedals, though, are a vision of beauty. Unfortunately, we didn’t get to drive the car, but we can report that if you’re used to a 350Z or 370Z interior, you’ll feel right at home in the Z35. 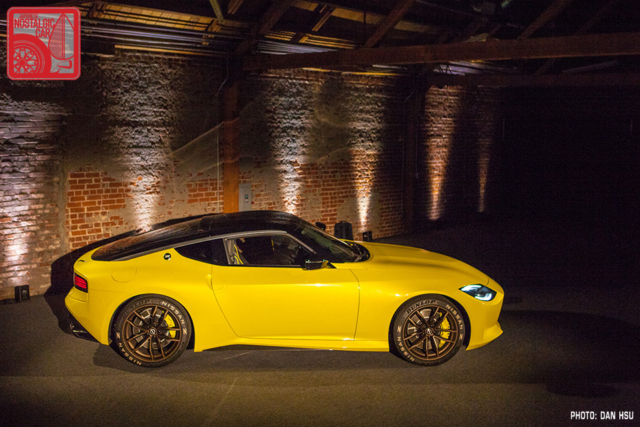 We asked to look under the hood but Nissan declined to show the engine. They couldn’t divulge any specific figures either, only to say that it was a twin-turbo V6. However it’s all but confirmed that it’ll have some version of the Infiniti Q50 Red Sport 400’s VR30DDT, which could have as much as 400 horsepower. 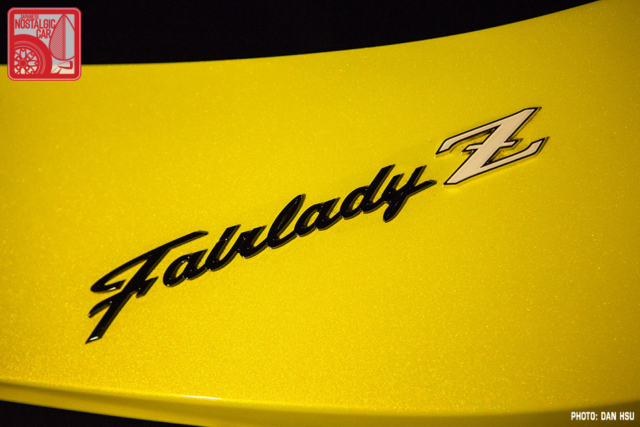 We came away quite impressed with the Z Proto. It feels both familiar and modern (both in a good way) at the same time. When the 370Z debuted, we thought it was a good car. It performed well, but it didn’t make us want to jump up and visit the Nissan dealership. The Z Proto, on the other hand, has that air of something desirable, something that isn’t necessarily on a spec sheet.

With sharp looks, a pure Nissan heritage (ie, not a BMW underneath), manual transmission, and what we believe will be a compelling engine, it seems like it’s got the right ingredients to make it a winner. While the driving experience will ultimately determine the answer to that question, it seems like we already mostly know what we’re getting: the 370Z’s solid chassis with turbo power and today’s technology inside. That sounds like a promising formula for what could very well be the last internal-combustion, stick-shift Z. 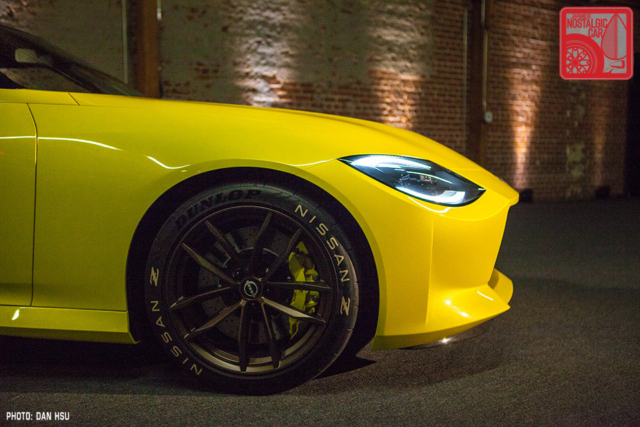 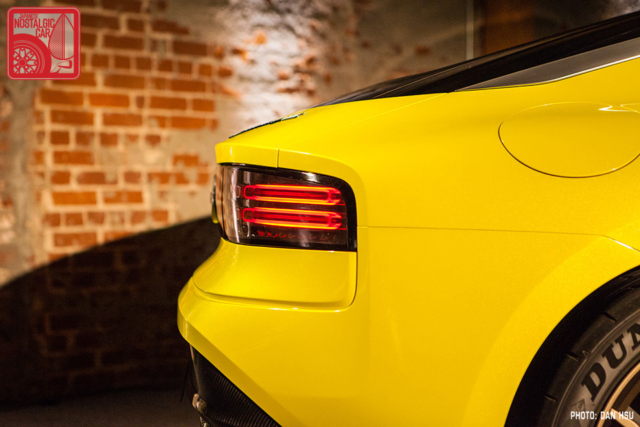 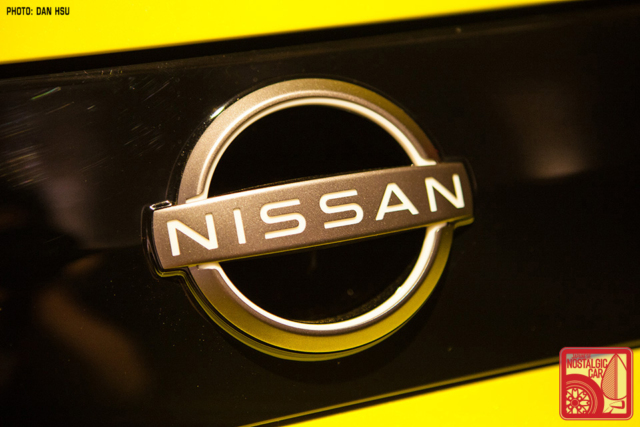 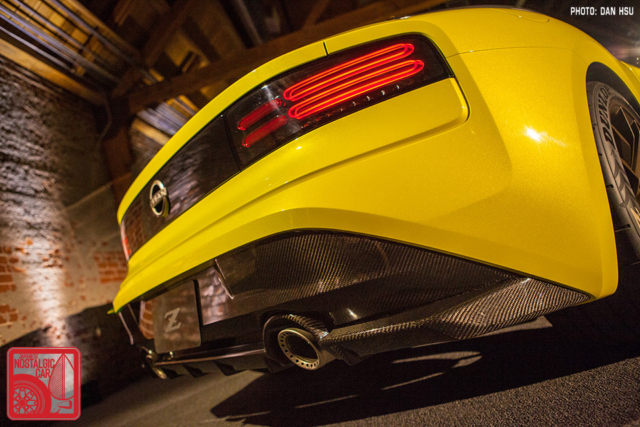 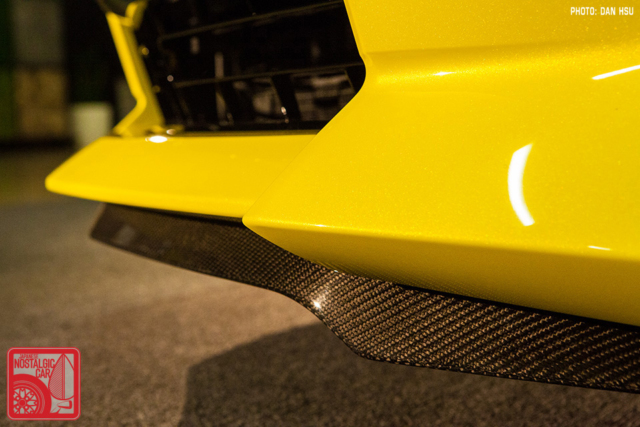 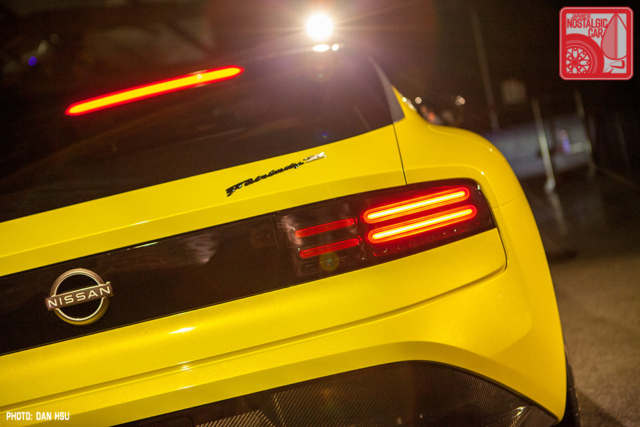