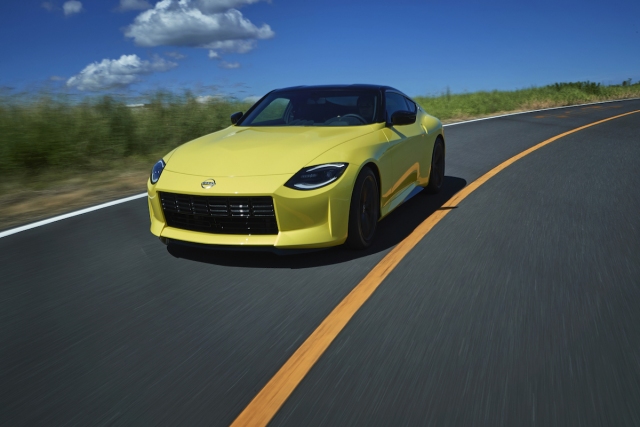 It’s hard to believe, but the Nissan Z Proto is the first new Z design in nearly 12 years. It was way back on November 15, 2008 we showed you the first photos of the 370Z ahead of its official debut at the Los Angeles Auto Show. Since then, several other Japanese sports cars have seen reboots, but arguably none have the name recognition, the following, and the brand heritage of the Nissan Z. When you have that much history and fandom, expectations run sky-high and it’s an almost impossible bar to clear. From what we know of the Z Proto, though, we think Nissan just might have pulled it off. 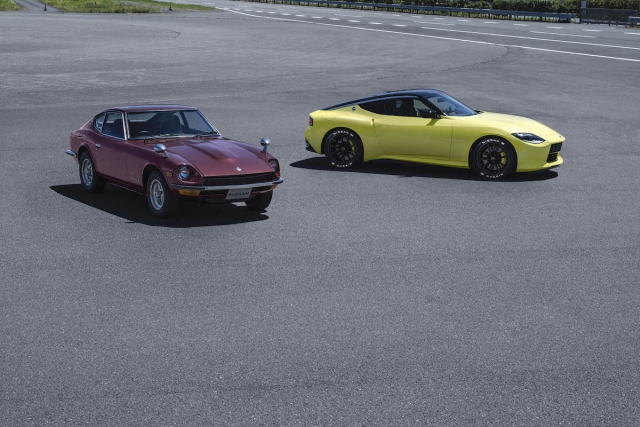 We were recently on a video call with Hiroshi Tamura, chief engineer of Nissan Z and GT-R, and Senior VP for Global Design Alfonso Albaisa to discuss the Z Proto, and what we heard is very encouraging. Besides the fact that it houses a V6 twin-turbo under the hood, Nissan isn’t revealing specific performance numbers yet. The car is still undergoing engineering work. However, as the two gents explained, that might not really be all that important.

These days, sports cars with many hundreds of horsepower and 200 mph top speeds are plentiful. What’s actually rare, though, are sports cars that prioritize the driving experience. Nissan is unusual among car companies because it has two performance icons. To destroy Nürburgring records, there’s the GT-R and its army of electronic systems achieving physics-defying lap times. That leaves the Z free to be a more convivial driver’s car. Having two iconic halo cars “is a unique point in Nissan DNA,” Tamura pointed out. 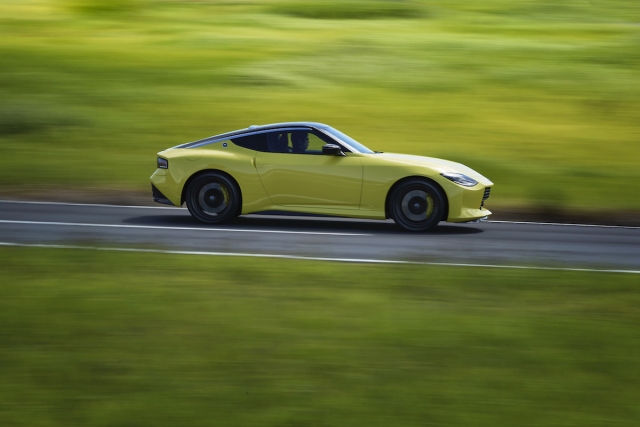 “The GT-R was created by mad scientists,” Albaisa mused. “Every little detail is engineered for driving perfection.” Drawing a contrast, Albaisa said, “The Z has a gentle beauty and accessibility.”

“It’s more like a mobile suit,” Tamura cheerfully added. “The Z is a dance partner. It has total balance, a nice design, performance, and good sound.” 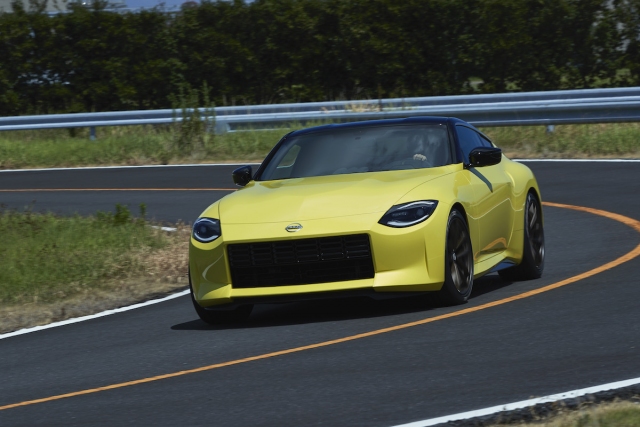 These descriptions indicate that the Z will be engineered for driving pleasure, not for chasing all-out speed. It also clarifies why in the age of superior dual-clutch gearboxes, Nissan went out of its way to underscore a stick shift.

“Nissan has two sports cars but they have different characters,” said Tamura. “And because it’s a dance partner, that’s why it must have a manual transmission.”

Music to our ears! Engaging driver’s cars are something which were once plentiful, something that’s sorely lacking in today’s automotive marketplace, and something that Japanese carmakers have historically excelled at. 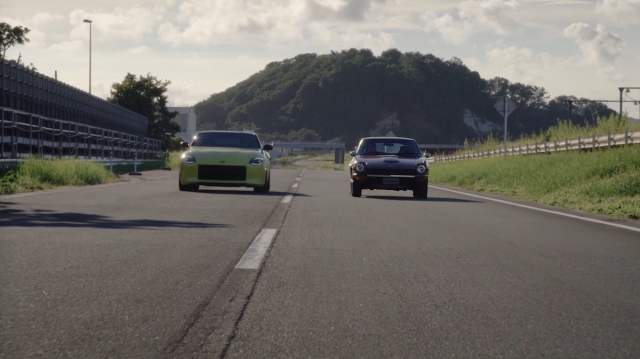 This may be why the Z Proto’s styling draws heavily from the original S30 Z, a car that embodied that philosophy so thoroughly. For months we’ve been promised a car inspired by the 1969 Fairlady Z that started it all, and the Z Proto does not disappoint. 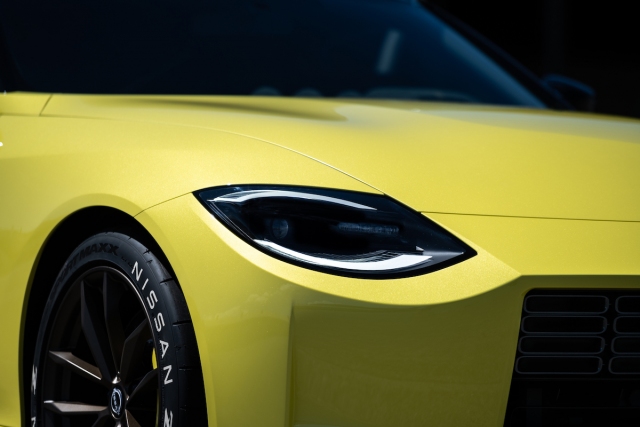 From the front, we see a throwback to  Yoshihiko Matsuo‘s sugar scoop headlights, but interpreted perfectly for modern times. According to Albaisa, “The LED headlights have two half-circles that harken back to the… 240ZG of the 70s. The ZG has clear dome lenses over the headlight buckets, which under light give off two circular reflections over each headlight. We liked that unique characteristic and discovered that it naturally fit with the Z’s identity.” 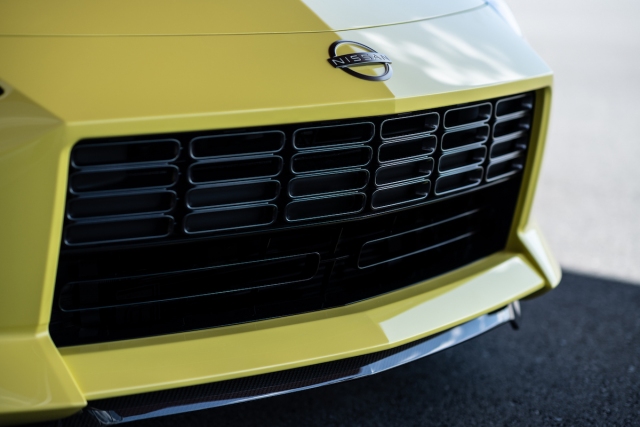 Other callbacks to the S30 include a nose that starts from a point, the distinctive power bulge on the hood, and a receding rectangular grille. Moving rearward, a “Z” logo C-pillar badge and a diagonal script “Fairlady Z” trunk emblem evoke the S30 as well. 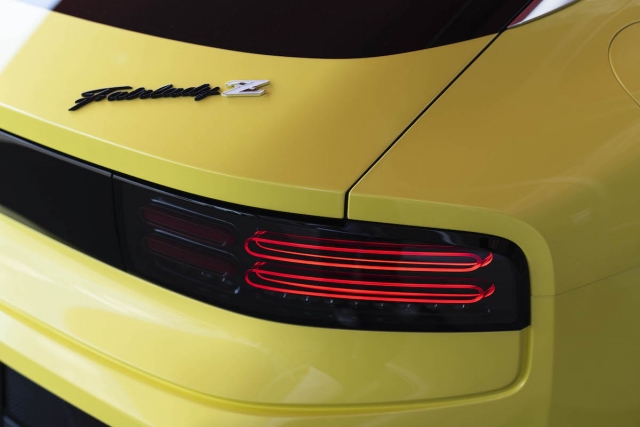 The rear, as predicted, references the fourth-generation Z-car. It has thin rectangular taillights like the Z32, surrounded by a vertical black panel spanning the back end. That panel manages to be reminiscent of both the Z32 and the S30, and of course, any car that pays homage to those two generations has to be yellow. 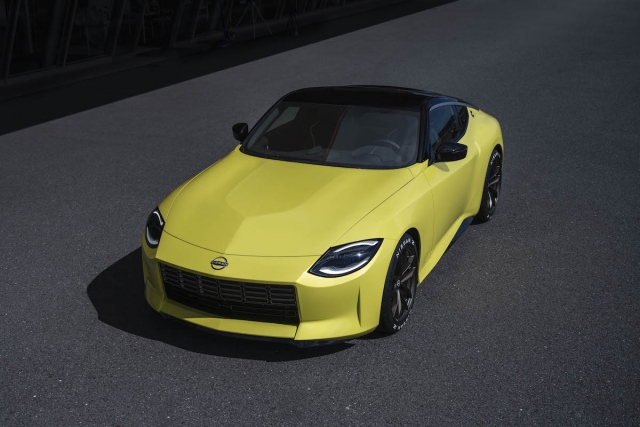 Perhaps most surprising in this day and age, the design is overall very clean. There are no fake vents or big spoilers, and the wheels are kept at a reasonable 19 inches. We’ll have a more in-depth design article soon, but for now most of the JNC staff agree, it’s quite pretty. 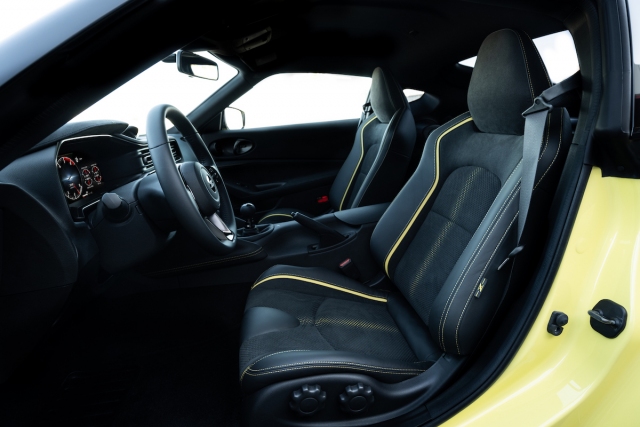 If there was a part of the 370Z most in need of a refresh, it was the interior. The Z Proto manages to keep its driver-oriented feel, but updates the console with a large touch screen. It retains the Z’s trademark triple gauge pod above the dash, and the steering wheel is a modern interpretation of the original 3-spoke. 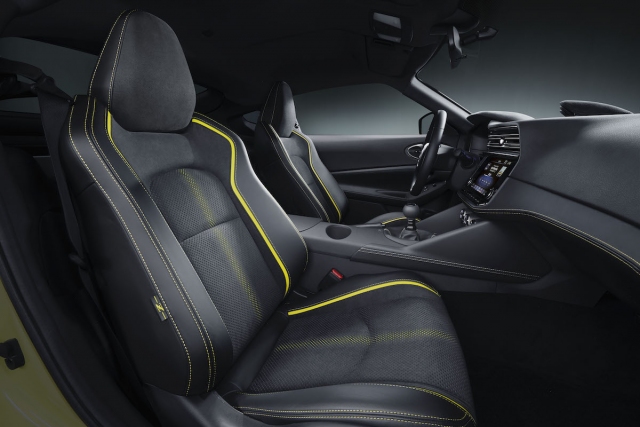 Like many modern cars, the gauge cluster is actually another screen. We have mixed feelings about that, but at least one of the menu options places the tachometer front and center. Not only that, but the 7,000 rpm redline mark is oriented at the 12 o’clock position. 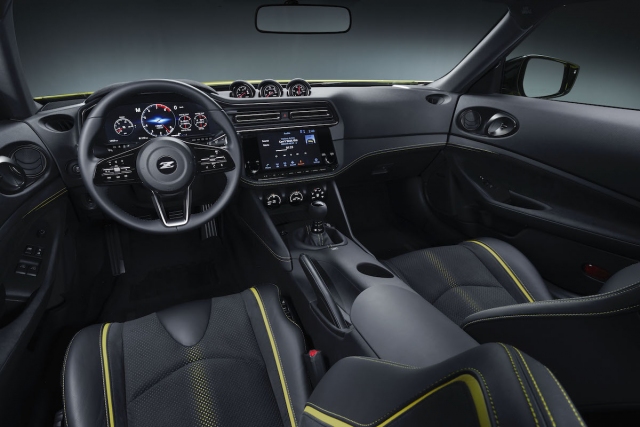 In one interior shot, a gauge on the left shows boost pressure, which seems to be redundant when there’s a boost pressure gauge in the pods. Presumably, though, the digital one on the dash can be replaced with a useful readout by the flick of a switch. Encouragingly, the handbrake pull has not been substituted by a button or other electrical gizmo.

A clever easter egg: Nissan has the odometer reading at 1969 km and the trip meter at 370 km, a reference to the year the original Z debuted and the current model. 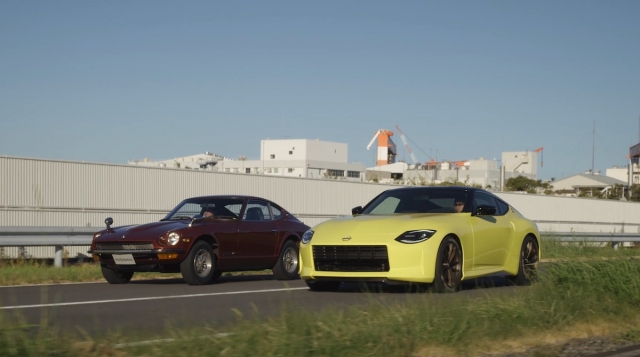 According to Nissan, the Z Proto is 172.5 inches long, 72.8 inches wide, and 51.6 inches tall. That’s 5.6 inches longer than the 370Z, the same width, and 0.4 inches lower. In some of the images where it’s driving alongside a 1977 Fairlady Z-L on the grounds of Nissan’s legendary Oppama plant, it looks not that much bigger. 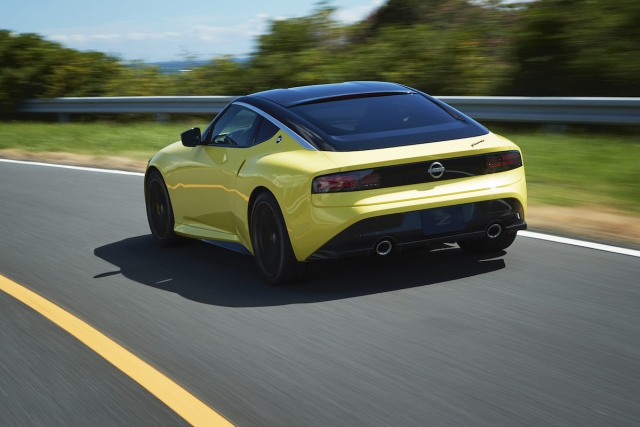 It should be noted that the Z Proto isn’t exactly what the production version will look like. Tamura pointed out that Nissan revealed the GT-R Proto in 2005, but the production R35 wasn’t unveiled until 2007. That comports with our prediction that the production Z35 might not be ready for at least two years from now. 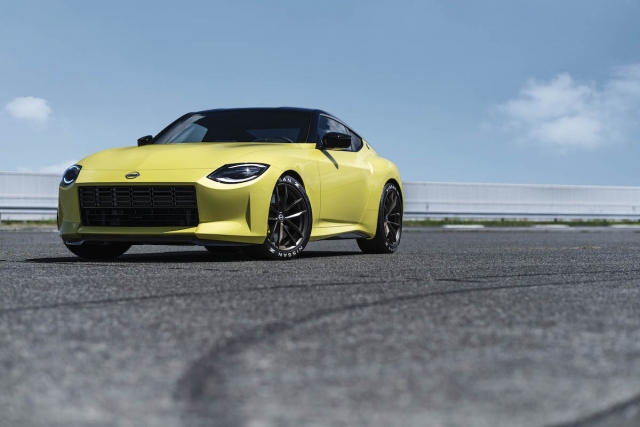 In the meantime, Nissan will be fleshing out the details. Albaisa indicated that this is gist of the design, but small changes might have to be made. “This is our vision for the Z today,” he said. “Tomorrow, Tamura-san might say we need to tweak this or that for engineering purposes.” For his part, Tamura said that the twin-turbo system was not easy to install, which is one reason the hood is elongated. 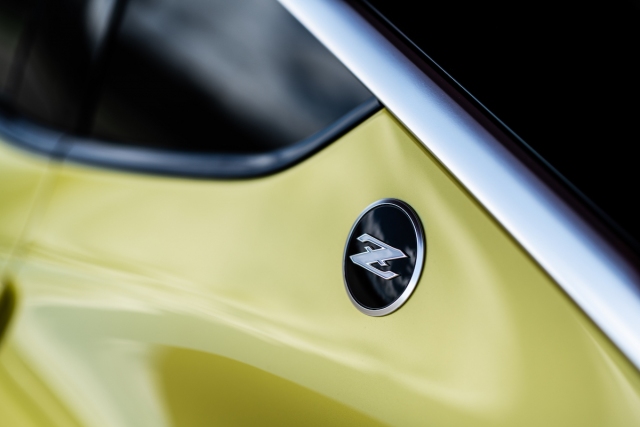 Neither man mentioned this, but Nissan in a separate announcement said they’ve achieved a breakthrough in carbon fiber reinforced plastic. A new casting method shortens the curing time from three hours to just two minutes, making it viable to use on an assembly line. Nissan says this technology will appear on SUVs in four to five years, but perhaps it could be used on the Z as well. If so, it would mean a considerable weight savings that would further codify the Z35 as a dance partner for the road. 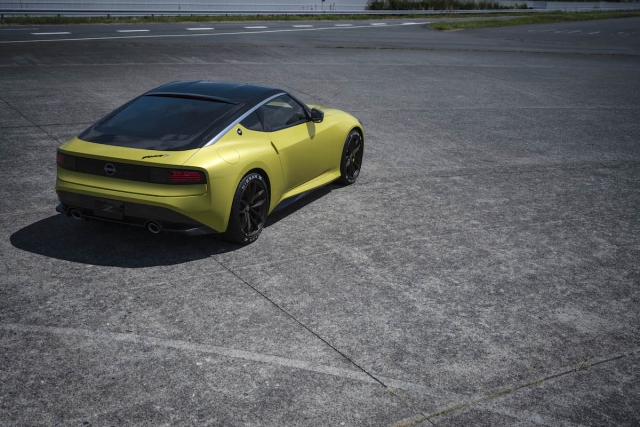 Based on these photos the words of Tamura and Albaisa, we think Nissan is on the right track with the next Z. Of course, pricing and power will play a factor in its success, but it seems they know their priorities and will deliver a car for true driving enthusiasts. That’s a rarity in today’s market, one that’s been generally unfavorable to sports cars to begin with. It’s giving us hope that the Nissan that made us fall in love with the marque, to paraphrase Tamura-san, will not die.

42 Responses to This is the seventh-generation Nissan Z Proto