The Datsun 620 looks pretty good as a wagon, it turns out 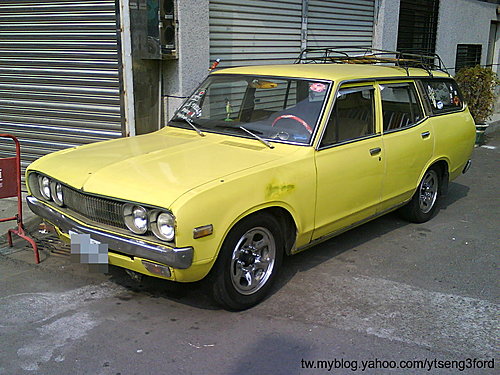 Your eyes do not deceive you. This is a wagon with a 620 front, and it’s not a one-off custom. It’s an actual car produced in an actual factory, and any Google searches conducted for it seem to only return this particular yellow example. Suffice it to say, it’s pretty darn rare.

Technically speaking, the car is not a Nissan. Or a Datsun. It’s a YueLoong YLN-753W. Yueloong was a Taiwanese automaker that licensed designs from Nissan and assembled them them locally for decades. If you visited Taiwan in the 90s, you would have seen Cedrics, Bluebirds, Sentras, and more, all wearing the Yueloong badge. In the case of the 753W, or Thunderbird as it was also called, Yueloong took the liberty of grafting a wagon body onto the 620 chassis.

The rear seems to be styled from the Datsun 610 wagon, and the upward sweep in the rear doors recall the Datsun 710 wagon though doesn’t match it exactly. You can tell it’s a wagon on a 620 frame because the wheels have six lug nuts.

Curiously, the dashboard has a “D” on it, even though the letter doesn’t appear anywhere in the car’s name. It’s also got a cool column-mounted manual gear shift. The C-pillar has a badge that says “Wagon” on it.

The engine was a 1.5-liter inline-four putting out 77 horsepower, making it likely a carry-over J15 engine from the Datsun 521.

Whatever the case, there doesn’t seem to be many of these around. This lone survivor is the only actual car that turns up in Googling and appears to be owned by a Taiwanese beach bum. In fact, the only other images of the 753 we could find were from old newspaper articles and ads.

Here, for example, is a newspaper article showing a 753W in use as an official car at  Tsinghua University. Another image was from a brochure for sale on a long-dead auction.

The practice of putting wagon bodies on YueLoong trucks appears to have begun with the 521, which can be seen in an old ad in a four-door wagon body style. Who knows if any of these cars exist anymore. Taiwan’s environment isn’t exactly friendly to old cars, so even the yellow one could be long gone.

permalink.
This post is filed under: wagons and
tagged: datsun, datsun 620, wagons, YueLoong.

17 Responses to The Datsun 620 looks pretty good as a wagon, it turns out