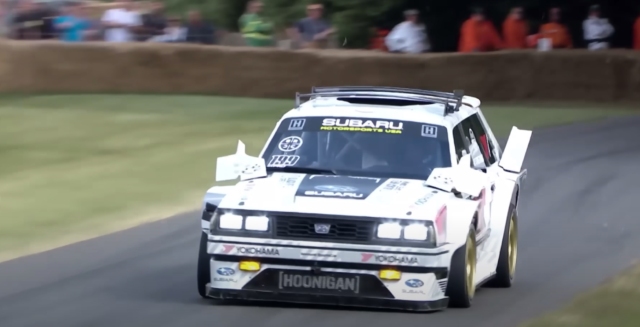 Okay so it’s not really a Subaru GL Wagon in any real shape or form. It’s Travis Pastrana’s “Family Huckster”, a late-model WRX STI with carbon fiber panels formed to resemble a Leone-based wagon. Said to be powered by Subaru boxer making 862-horsepower, it made its inaugural public run at the Goodwood Festival of Speed over the weekend. Turns out, it was one of the fastest cars at the event.

The centerpiece of the Festival of Speed is a hillclimb up a 1.16-mile driveway (the event is held on the grounds of a nobleman’s estate). With all manner of racing vehicles from various disciplines and eras gathered, obviously the most logical thing to do is time them to see which is quickest. With Pastrana behind the wheel, the Subie clocked a time of 46.20 seconds, which placed it fourth overall for the event.

Since Pastrana unveiled the 1983 Subaru GL Wagon, more details have emerged. In addition to the ski team-inspired livery, it appears to have an instrument pod made out of blue-tinted carbon fiber and formed after the original’s shape and hue. Apparently, the digital instruments were also configured to approximate the digital clusters found in some GLs of the era. There’s even an original GL radio stuffed into the console. Its gold wheels reference the 8-spoke rims that distinguished the AWD Subarus of the era from the front-wheel-drive ones.

Seeing the Wagon in action also provides a look at the car’s active aero (15:24 in video above). When stopping hard, the rear wing tilts and air brakes pop up from the fender flares to help slow the car. The roof rack isn’t for show, either. It helps guide air toward the NACA duct on the roof.

As entertaining as it is, it’s really too bad that the Huckster was at Goodwood this weekend. It would have been much more interesting to see what it can do on another hillclimb that took place on this side of the Atlantic. No matter where it races or what’s under the skin, though, we’re just glad a GL is getting its moment in the spotlight. Also, it’s just fun to say that a 1983 Subaru GL is faster than Porsches and Vipers.