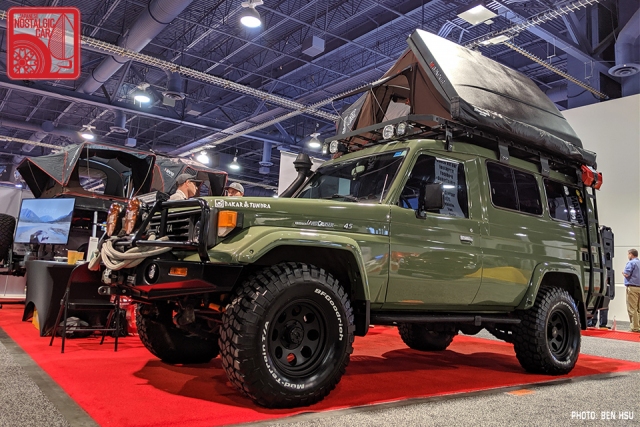 It’s really hard to capture everything at a show as big as SEMA, but here are a few more slabs of Nihon Steel we found lurking around. There was everything from slammed sleds to off-road heroes, sometimes both in the same car (you’ll see what we mean). Here’s more J-tin for your eyeballs.

Over at the Kansei Wheels booth, an X80 Cressida wearing a Mark II fascia caught our eye. Though factory X80s never had a red and silver two-tone, the colors work on a drift car somehow. Maybe it’s because it reminds us of the High Flash Two-Tone of the AE86. In any case, it was a nice surprise to see a big 80s Toyota sedan holding it down among the widebody Lambos. 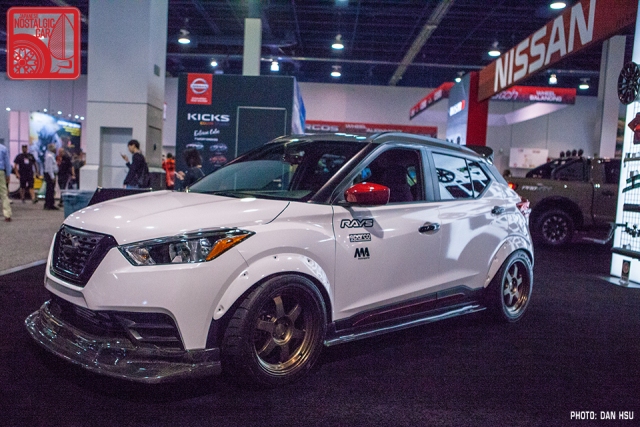 Nissan had its largest display in years, with five cars at its booth. We really hoped they’d do something to honor the 50th anniversary of the GT-R and the Z, but alas. Instead, we got a modified Nissan Kicks Street Sport. There are some cool touches on this featherweight crossover, like a Garrett GT2255 turbo on its 1.6. It even has some retro touches like bolt-on flares and Volk TE37s. If Nissan had the guts to actually build this thing it would be pretty epic, but it’s just a concept. 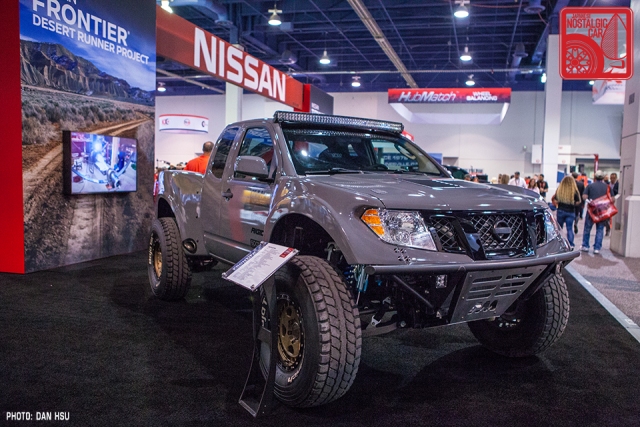 The Frontier Desert Runner is a total badass. Powered by a turbocharged, intercooled, and built Titan 5.6-liter V8 instead of its stock 4.0-liter V6, it claims an output of 600 horsepower and 700 lb-ft of torque. Even better, it’s mated to a 6-speed manual. 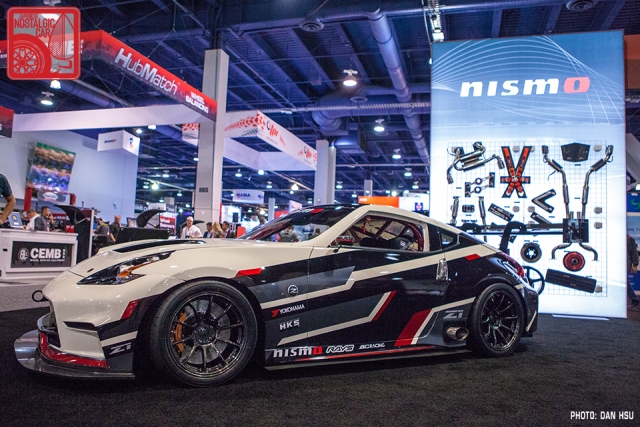 There was one Z at the booth, and it was a pretty serious machine. Created by Z1 Motorsports, the 370Z is built for Global Time Attack. It’s not just a gussied-up SEMA show car with a bunch of stuff tacked on, but a true race car, built from an acid dipped shell and lots of functional ducting. That, and the addition of twin R35 intercoolers, required a total rework of the front fascia and bumper mounting points.

A side-dump exhaust, 3D-printed dash, and full roll cage painted NISMO red are just some of the business details. The car is measured at 750 horsepower right now, but the team thinks 1,000 is possible, Nissan Motorsports spokesperson Bryana Manning told us. When we asked why a time attack car, she said, “We think the future of racing is headed in that direction. Global Time Attack appeals to younger enthusiasts because the entry-level classes allow you to bring your street car.” She also mentioned that the hood, which contains to voluminous fiberglass ducts, was fabricated by legendary builder Chuck Beck, who had ties with Peter Brock and BRE back in the day, so there’s a small heritage angle there. 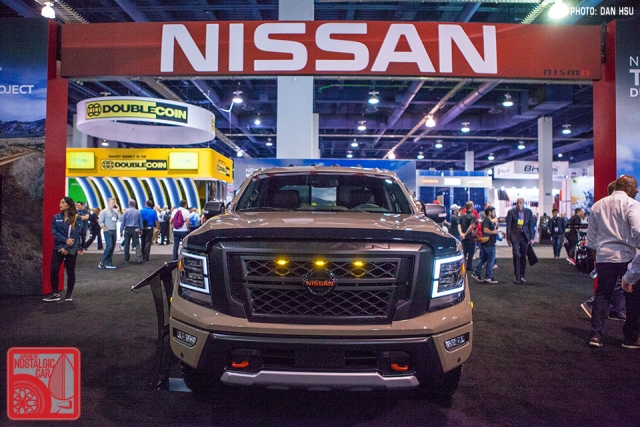 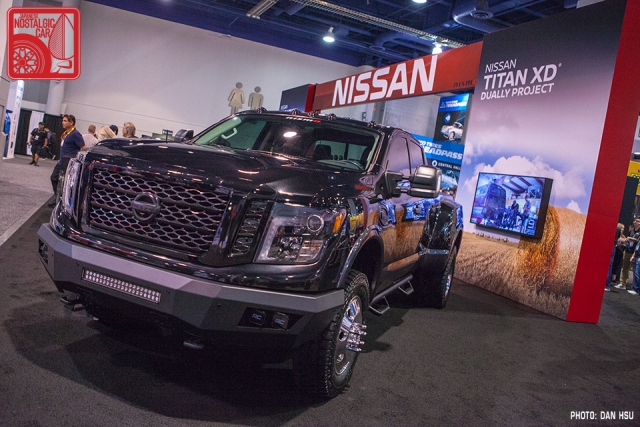 There were also a pair of Titans, including an insane dually. There is nothing wrong with any of these cars but during the 50th anniversary of the Mustang Ford went all out with Mustangs from all generations. Imagine the impact Nissan could have had with Zs and GT-Rs galore. 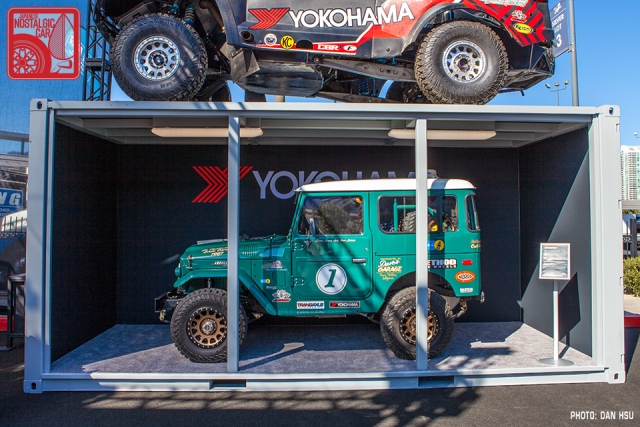 At the incredible Yokohama Tire display, an FJ40 Land Cruiser was parked under another truck, like a couple of toys. 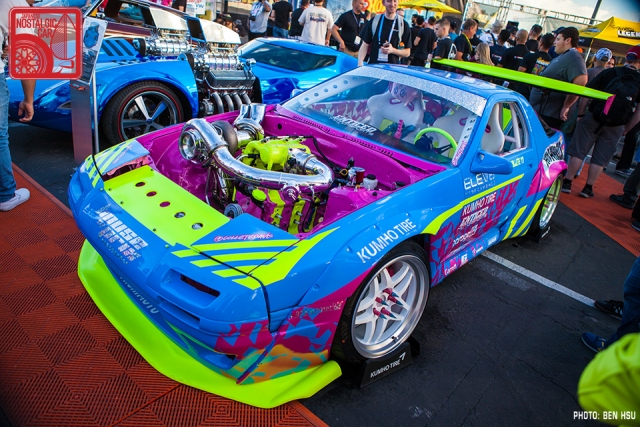 Speaking of toys, winners from across the country at the traveling Hot Wheels Legends Tour were assembled in one large display. Each owner was competing for the ultimate prize — to have their car made into a Hot Wheels car.  There were several Japanese cars of note, including Collette Davis’s neon FC. Showing off its insane turbo plumbing, it was one of the very few RX-7s at SEMA that didn’t have an LS swap. Hot Wheels will be making an FC next year. 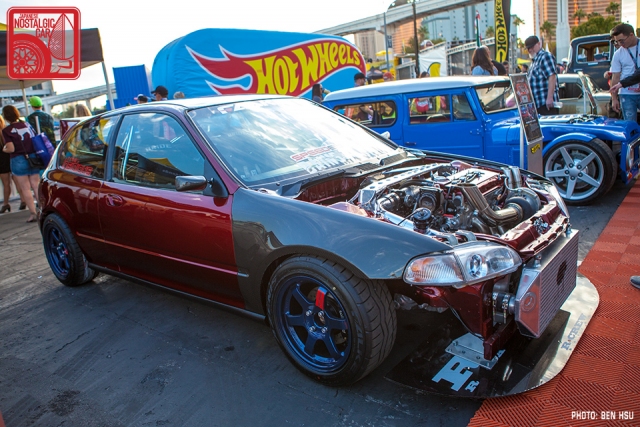 Carlo Uribe’s crazy turbo EG Civic won the San Jose, California stop of the tour. Though it wasn’t the overall winner, Hot Wheels will be making an EG Civic come next year as well. 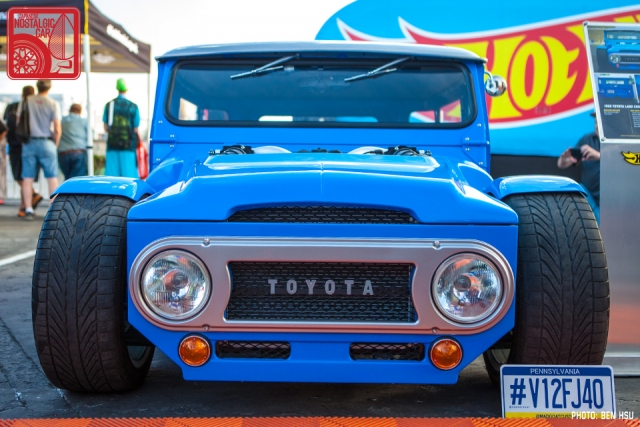 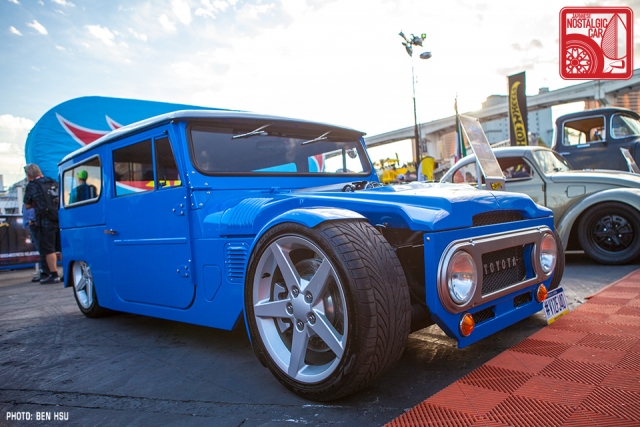 Robert Colfer won the Philadelphia leg of the tour with his 1968 Toyota Land Cruiser hot rod. Five inches were chopped from the top, and two three-inch sections were cut from the middle. It sits on a custom chassis with Corvette, and Porsche suspension bits, and a BMW V12 motor under the hood. 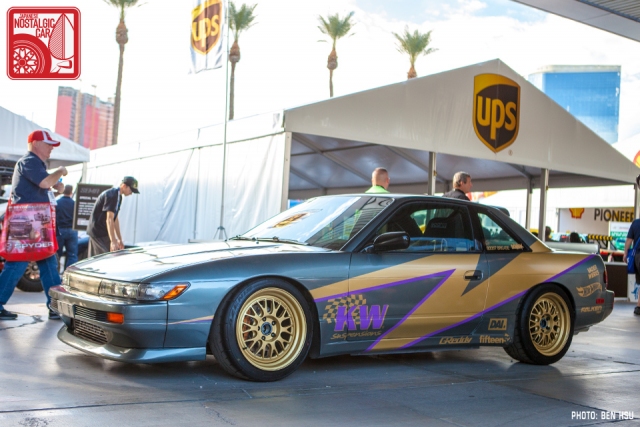 Speaking of Hot Wheels, the KW Suspension Silvia is going to be debut in the lineup next year. This is the actual color and graphic scheme that will be on the car whose prototype we showed you a while back. 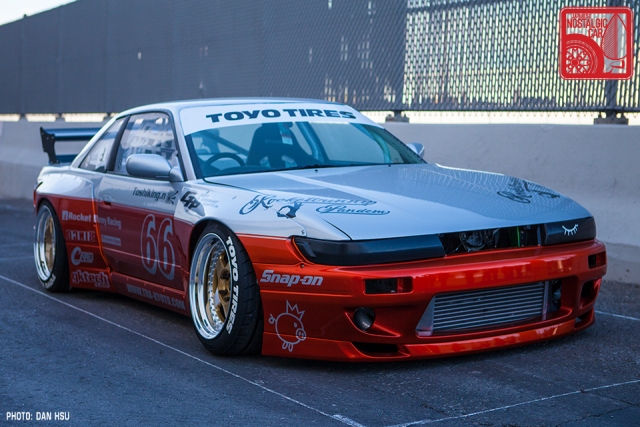 Another S13, two-toned and wearing a Rocket Bunny Pandem kit, was placed just outside the massive Toyo Tires display. 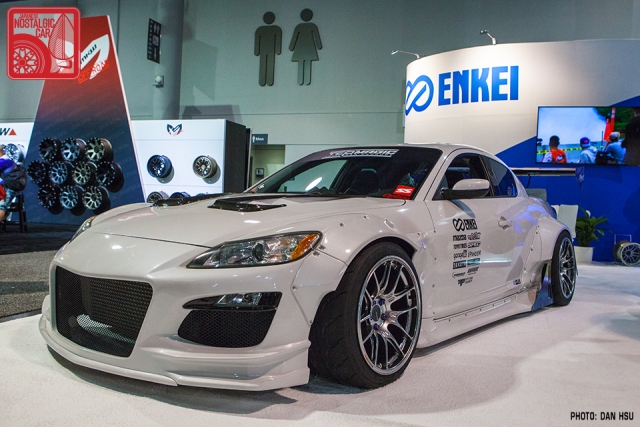 It’s good to see the Mazda RX-8 still getting some love at SEMA, courtesy of our friends at Enkei Wheels. 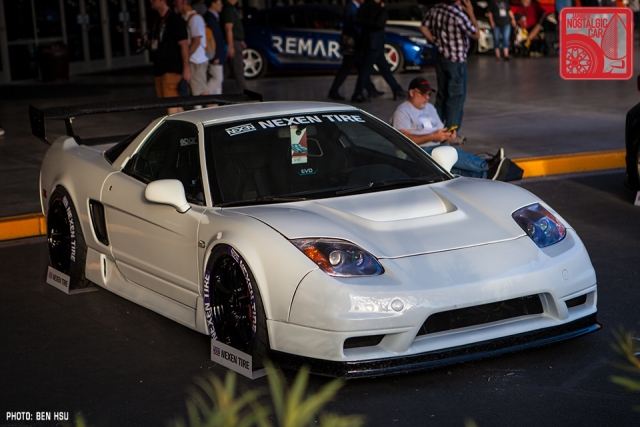 We call this one Still Life with NSX and Tired Attendee. 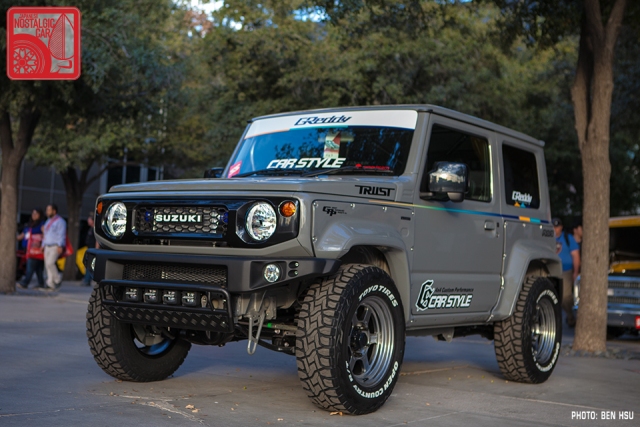 Another Suzuki Jimny was found just cold chillin’ by the North Hall. It’s really too bad Suzuki no longer sells passenger cars in the US. 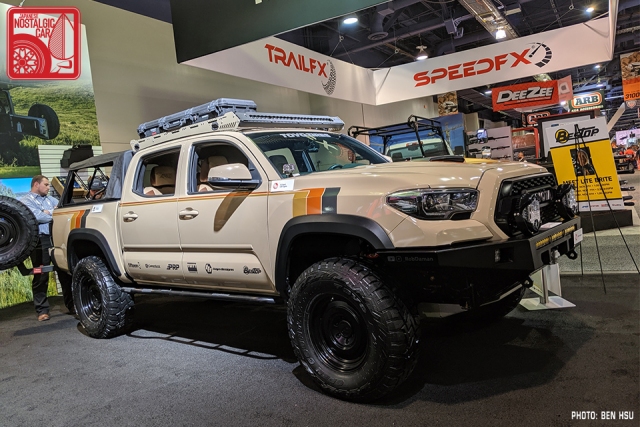 The upper level of the South Hall was where a lot of the off-road and truck stuff was. We spotted a new Tacoma but one sporting a tape stripe kit inspired by 80s Toyota trucks.

Land Cruisers with overlanding gear were everywhere this year. The enthusiasm once reserved for sports cars has now been redirected at trucks that will let you escape to anywhere. Does this portend to something darker in the greater culture or is it just a fad? 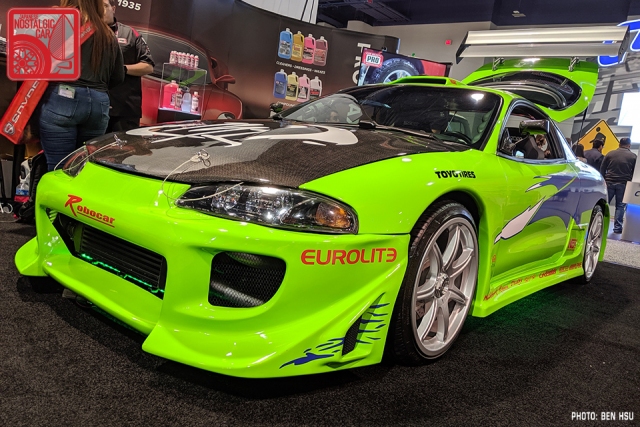 We close out this installment with a Mitsubishi Eclipse. We can’t remember the last time we saw one at SEMA, but it was probably around the time when this Fast & Furious color scheme was considered cool. Now, I guess some find it nostalgic?