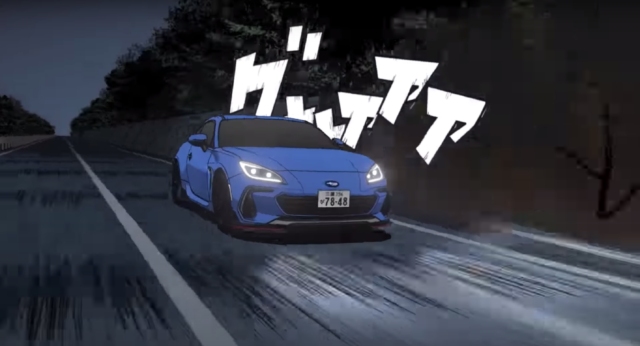 An illustrated car speeds down a mountain road at night. That image will forever be linked to the artistic style of Shuichi Shigeno. The Initial D creator captured the thrill and speed of Japan’s underground touge battles even when it was just monochrome drawings on paper. Shigeno’s drawings came to life when the manga was adapted to anime, especially in later chapters as CG improved. Now, Subaru is copping some of his swag with new ads in Japan.

There are two videos in the series, one for the BRZ and one for the WRX. Each shows the car barreling down a touge at night. atakana characters floating by to indicate the roaring of the motor. The ads highlight the cars’ attributes, like aerodynamics and handling, by adding wind tunnel flow visualizations or x-raying behind the bodywork. The sense of speed is reproduced quite well, complete with subtle damping motions and vibrations.

The videos never mention Initial D, but that’s clearly what they’re trying to evoke. Ironically, it’s the US-market ads for the Toyota GR86 that had the official partnership with Shigeno. Toyota UK has gotten in on the act as well. Subaru’s ads aren’t totally far fetched, though. After all, Takumi’s chain-smoking father Bunta Fujiwara did eventually end up in an Impreza. Maybe these are an unofficial wink to where they think Initial D goes after Takumi’s story ends and before MF Ghost begins.

permalink.
This post is filed under: cm and
tagged: brz, cm, subaru, wrx.

1 Response to Rate This Ad: Subaru intensifies the Eurobeat with Initial D-style ads