QotW: Can you help a fellow JNC reader find a ride-on car for their daughter? 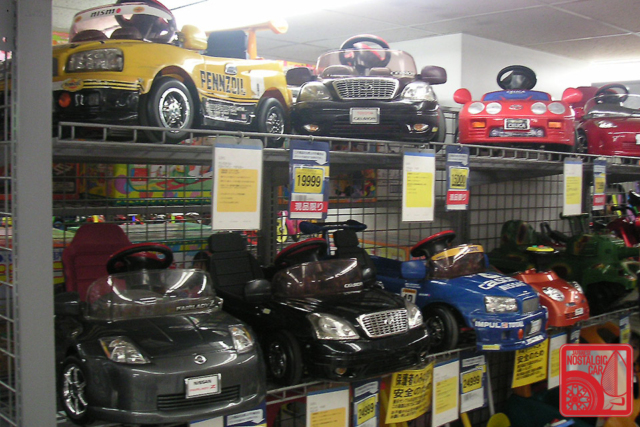 This week’s question comes from Robin N., whom we are trying to help with the very worthy goal of finding a Japanese Power Wheels-type car for kids. “There are not many ride-on cars for kids that are Japanese,” Robin wrote in an email. “Even more so ones that are JNCs. I just had a kid and I can’t find anything cool for her except the Mazda Roadster/MX-5 Miata, which costs the same as a real car.”

It’s true. about 20 years ago, we came across the above display at a Japanese Toys R Us, but trying to find any of those outside Japan — or smuggling one back in your suitcase — was impossible. Robin continues. “All I find are BMWs, Mercs, Audis, etc. It would be cool to see what comments arise from this as I’m sure I’m not the only one looking for a ride-on car that’s something cool like a Hakosuka or a TA22 Celica.” Let’s try to help Robin with this very worthy goal of a cool car for the kiddo.

Can you help a fellow JNC reader find a ride-on car for their daughter?

The most entertaining comment by next Monday will receive a prize. Scroll down to see the winner of last week’s QotW, “What’s your favorite car chase scene?”

To be honest, in a lot of movies we zone out during the supposedly climactic but seemingly endless fights scenes between hero and big boss, especially when we’re talking about modern superhero movies filled with CG laser beams. This must be how average people feel when forced to sit through a seven-minute car chase in the middle of a movie. But for a car enthusiast, a chase sequence can turn an otherwise boring movie into a memorable experience.

When you think of car chases, the gritty Hollywood dramas of the 70s and 80s are first to pop into mind — Bullitt, The French Connection, Vanishing Point, the original Gone in Sixty Seconds. These all got mentions, but Crown added the deeper cut of Dirty Mary, Crazy Larry, while Fred Langille related a truly incredible story of his parents’ encounter with the filming of the McQueen opus. But Steve brought up the true id of America in police pursuit from — the OJ Bronco chase.

If we want to start looking for ones that include J-tin, one of the earliest examples is probably Ian N‘s pick of You Only Live Twice. Christopher‘s nomination of Fast & Furious: Tokyo Drift is loaded with Japanese cars, even if it wasn’t really filmed in Japan. One of the best chases, though not technically a car chase, is エーイダン‘s choice of the incredible scene from Terminator 2: Judgement Day that features a Honda XR100R dirt bike and a Freightliner tow truck. And of course, j_c‘s selection of the Baby Driver scene with the Subaru WRX STI is a modern classic.

For comedy there’s Lakdasa‘s vote of Taxi 2 pits a ridiculously modified Peugeot 406 versus a small fleet of Mitsubishi Lancer Evo VIs. speedie brought up the Prius chase from The Other Guys. 555jay reminded us about the amazing Archer episode “Drift Problem” featuring a Mazda RX-2, AE86, Mazda GLC, Datsun 240Z and more.

Moving into actual Japanese productions, it was no surprise that f31roger would tip his hat to Abunai Deka and its prodigious F31 Nissan Leopard content. dankan introduced us to another animated great from Lupin III: Conspiracy of the Fuma Clan that pits Lupin’s Fiat against an army of Datsun 411 Bluebird police cars.

Interestingly, the greatest J-tin car chases probably don’t originate in Japan at all. Instead, it’s Hong Kong films that are a feast for JNCers, with backgrounds full of 70s Nihon Steel, a healthy obssession for Japan’s tuning culture, and their biggest action star as a walking advertisement for Mitsubishi Motors. Not Now‘s pick of Jackie Chan’s Who Am I was, for many, their introduction to the wonders of the Lancer Evolution. Jonathon P.‘s called out Thunderbolt‘s Mitsubishi FTO versus R32 Skyline chase, but the entire film was about 90s JDM hero cars a full six years before the original Fast and the Furious.

However, among the great Hong Kong action comedies Mad Mission 2: Aces Go Places is one of the more obscure, and we’re glad Michael K. brought it up. It stars an A40 Celica against a fleet of Jaguar XJ6es. It doesn’t appear to be product placement, but in an amazing coincidence the license plate on this basis for the Celica Supra has the sequence “XX” in it. Also, our favorite background car has to be the box-type Lancer, with period RS-Watanabe wheels no less!

Hong kong action flicks of the 80’s and 90’s had great car chases. One of my faves is Aces Go Places 2. It’s a comedy but has the bonus you’re looking for. The good guys are in a MkII Celica and there’s loads of great j-tin in the background!

12 Responses to QotW: Can you help a fellow JNC reader find a ride-on car for their daughter?