PROFILES: Hiep Dang got these other Nissans instead of an R32 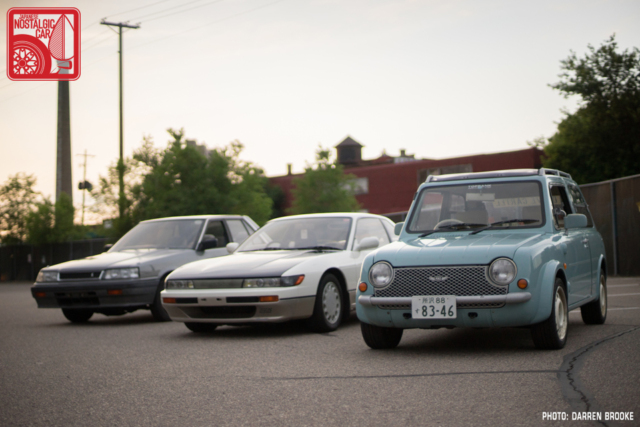 Usually when we dive into the waters of collecting cars, we inherit the gene from a family member or a group of friends, and our interests follow theirs. We usually start off with something simple and move up from there. How often is it that we start our obsession with something completely unheard of and jump right off the deep end? Well there is at least one of collector like this, and his name is Hiep Dang. 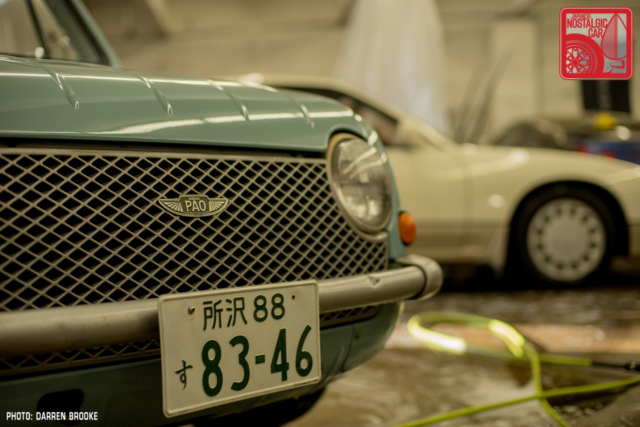 Dang’s whole collection started one day when the co-owner of his detailing shop, Pristine Detail in St. Paul, Minnesota, rented out some unused office space to Top Rank International Vehicle Importers. As the business set up shop and became ready to receive its first shipment of cars from Japan, Brian Jannusch, the Top Rank manager for the Midwest, let Hiep look over the list of cars coming to St. Paul. It consisted of an R32 Skyline GT-R, automatic Nissan Pao, and a few other cars. Naturally, anyone would be excited about the GT-R and so was Hiep, but things turned out much different once the cars had arrived. 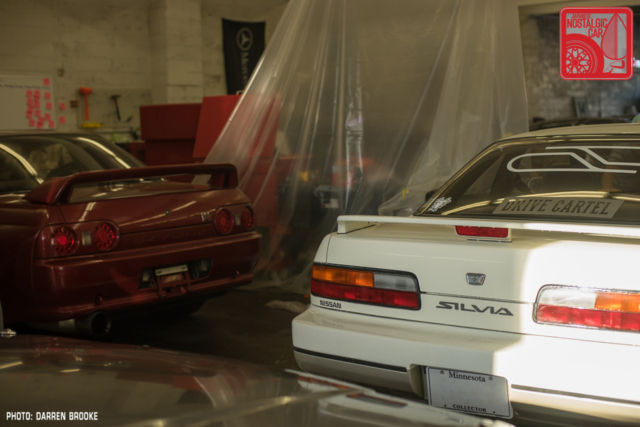 Hiep literally walked past the GT-R without even so much as a glance, completely smitten with the tiny retro econobox. Brian tried to make ensure that Hiep was sure of what he wanted, but before he could even get the words out Hiep was already signing a check for the Pao. 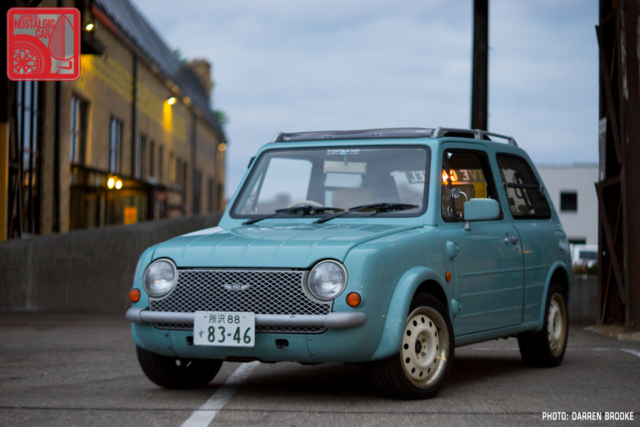 That first Pao lasted a few months before Hiep decided a manual transmission was in order, and sold it back to Brian in partial trade for a manual Pao that had just come stateside. “I don’t know, I just had never seen one and I thought it was the coolest car I had ever seen,” Hiep told JNC. “I don’t care about the performance as much as how weird the car is.” 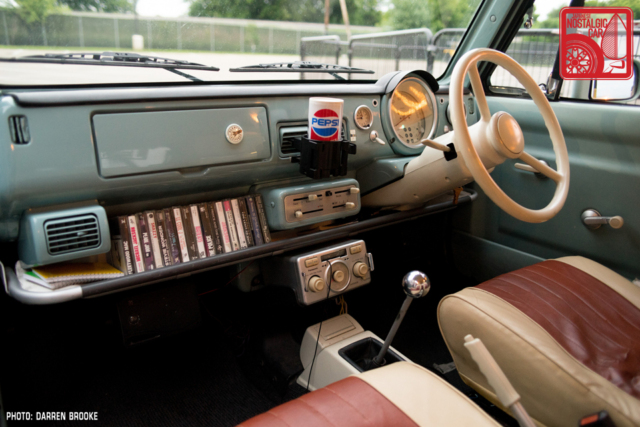 For these same reasons, Hiep believed that nobody else would enjoy the Pao as much as him, so at first he was unsure about bringing it to car shows and used it simply as a commuter. Some of his friends talked him into taking it to its first show, despite his reservations.

“It’s literally just my daily driver,” Hiep explained. “It’s filthy most of the time,” referring to the single pop can in the cup holder and the cassette tape out of place on the passenger seat. Once he got it to the car’s first show, however, to his great astonishment, the car wasn’t just enjoyed but constantly mobbed with people who had never seen one in person. Hiep states, “It was a cross section of people who had known about it since Gran Turismo 4 back in the day, and and very confused truck people.” 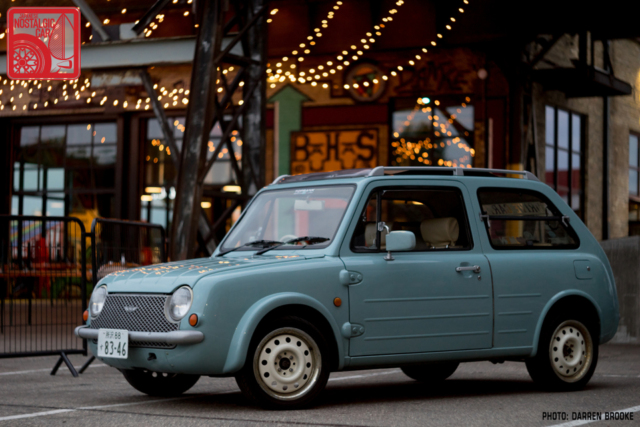 Hiep’s astonishment didn’t end with how much attention the car received, but with the 2nd place award he won at the show. This was followed up by another Best Japanese In Show win at Hot Import Nights Minneapolis.

The biggest evidence of the Pao’s popularity are the events that happen on the daily. “I was driving down the road and some girls asked for a ride, jokingly. I obliged, but then they actually got in the car. I would be lying if I said I’ve been flagged down only once,” Hiep says with a chuckle. “I’ve never seen a car that gets more attention from girls than this car, all my friends with GT-Rs are pissed!” 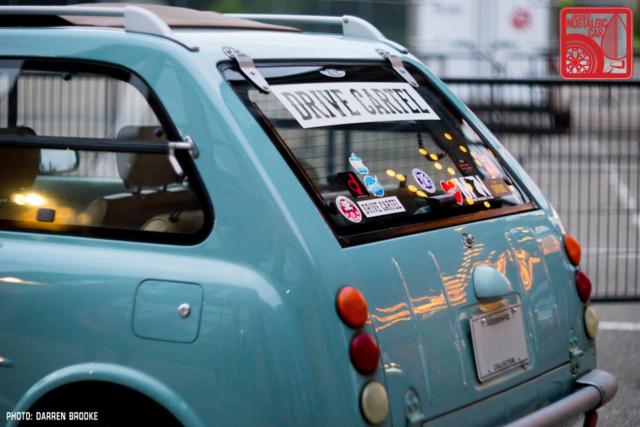 The Pao still serves daily driver duty during summer, but Hiep is dedicated to preserving the car in it’s current state. With it’s diminutive size and fishbowl like visibility, the car is in its element zipping through the herds of crossovers clogging St. Paul’s streets, bringing joy to all. Often his journeys to the grocery store are accompanied by thumbs ups and smiling children.

By Hiep’s account, the Pao hasn’t needed anything beyond routine maintenance to keep the car reliable during its daily drives, which, 29 years on from leaving the dealership lot, is quite the testament to the reliability of the Pike Factory cars. It is a rare thing to find a car that comes from the factory with a perfect execution, but the Pao is one of those examples. 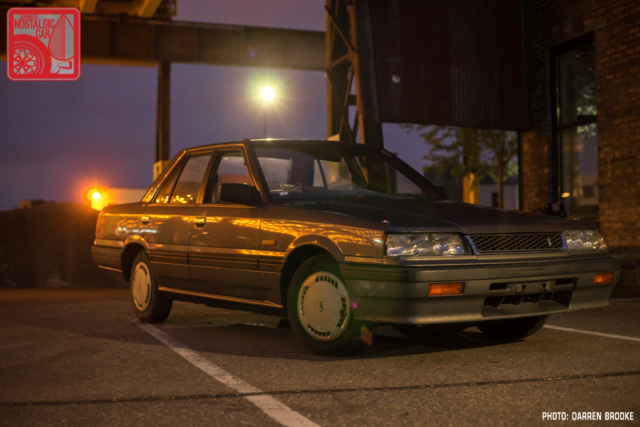 However, the Pao is only one of the oddities in Hiep’s collection. The second car he procured came, again, from his salesman office-mate. Brian from Toprank had a friend who was looking to get rid of an R31 Skyline 1800 Passage project that had previously been owned by an elderly man in Japan. Less than shockingly, the literal grandpa-spec 1800 Passage trim level wasn’t a hot commodity for Brian’s standard fare of customers looking for GT-Rs and would prefer to not be reminded of Godzilla’s humble roots. He ended up storing the car at his workplace, aka Hiep’s shop. 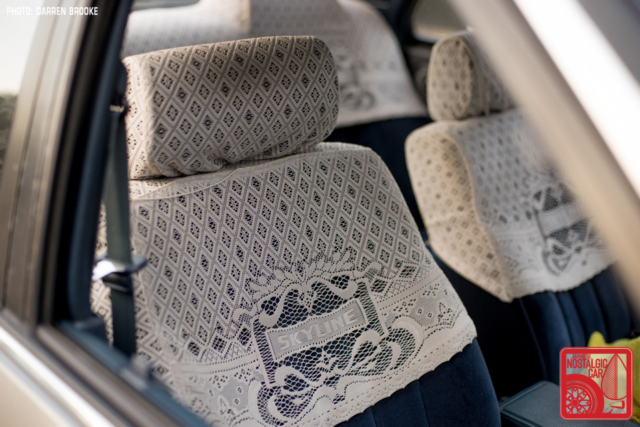 With Hiep looking at it every day on his way into the office, it was only a matter of time until the bug bit again, and Hiep knew he had to have it. He started seeing the seat doilies in his dreams of floaty rides down to the fish market. So, he made an offer on the car, some haggling ensued, and a check written. 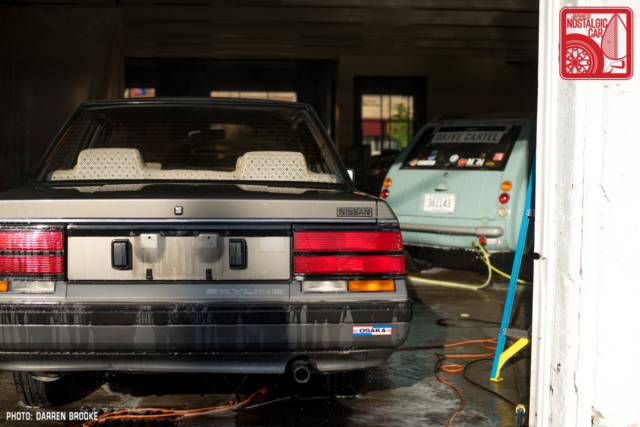 Then the car sat, not from buyer’s remorse but rather from not knowing what to do next. While he originally thought to make it into a disposable drift car, Hiep eventually felt that the Skyline was destined for a better fate. Its simplicity and patina of the car began to grow on him. With the higher trim levels of cars you begin to get lost in the whiz-bang features, but with a lesser model you begin to appreciate a chassis at it’s most primal level. 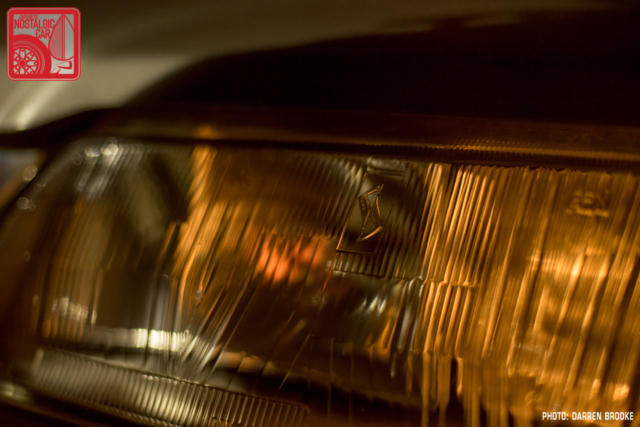 The little details in the car stand out, such as the Skyline emblems embossed into the headlamp housings. “To a lot of people, they couldn’t care less about this car but it has a special charm for me,” Hiep described. A build may still be in the cards for the R31 in the future, but for now Hiep wants to preserve it as is unless a plan really speaks to him. 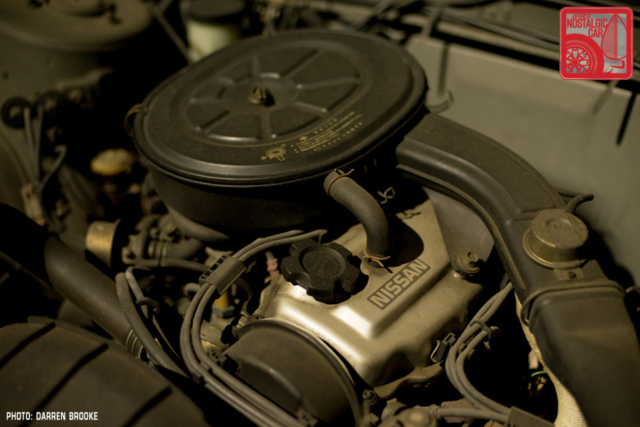 “This car is really wacky when you open the hood,” Hiep explained. He was quick to point out that you can access every bolt on the bell housing without even lifting the car off the ground, as there’s about 4 inches between the engine and the firewall. The engine bay of the car is undetailed, but mechanically the car is flawless. Clearly the old man in Osaka who originally owned it took impeccable care of it. 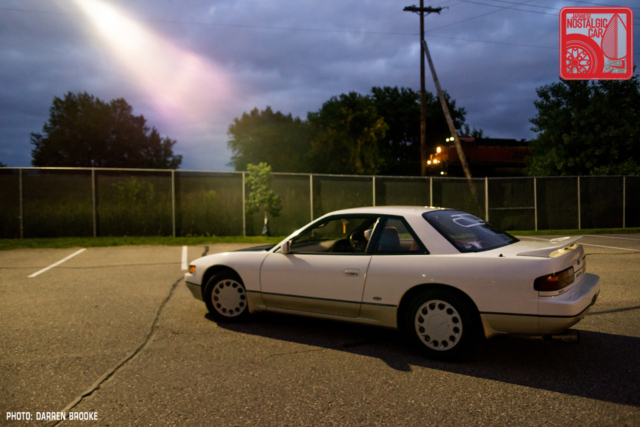 After passing twice on GT-Rs, it might come as a surprise that Hiep actually owns a car that he originally set out to get. He had come close to buying a salvaged 240SX with a Silvia nose for a driver’s car, but Brian, once again showed Hiep the true path of the JDM car. Top Rank had just gotten a Silvia for only a couple of thousand dollars more than the price of the branded-title 240SX. There was no contest, it was decided that Hiep would add the third car t0 his collection. 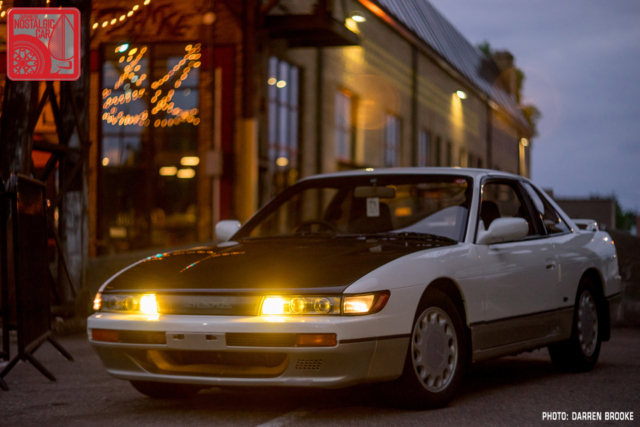 To say this car has always maintained perfect traction would be an inaccurate statement. Hiep’s S13 actually fulfills its duty as his driver’s car and is also the car he takes out to track days. Even though the S13 is often driven in anger, Hiep always tries to keep up appearances and never let’s his driving get too rowdy. 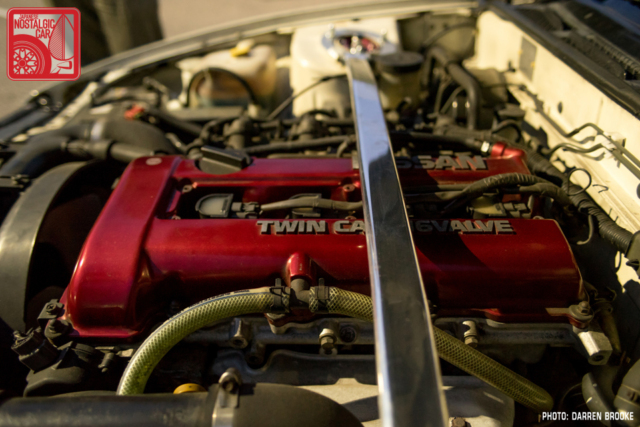 Originally the car was a Silvia Q’s but the previous owner had upgraded it to K’s specifications with a SR20DET under the hood, projector headlamps and an automatic climate control. Under the hood, the car is largely factory-spec. An aftermarket strut bar and oil separator have been added but otherwise it looks like a Silvia K’s whose conversion wouldn’t be noticeable if not for the Q’s badging kept in place. 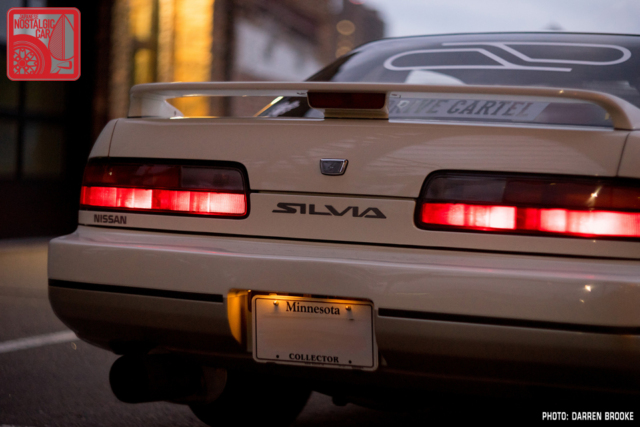 The car shows no signs of living the hard life of a drifter, and was clearly originally built to be enjoyed. While most S13s in America are held together by zip-ties and body panels that have rusted together, Hiep’s car is flawless. Nary a paint imperfection nor dent can be found in the car. Even the original steering wheel hasn’t suffered the dreaded foam separation that plagues cars of this era. Getting into it is like stepping into a time machine to 1995. 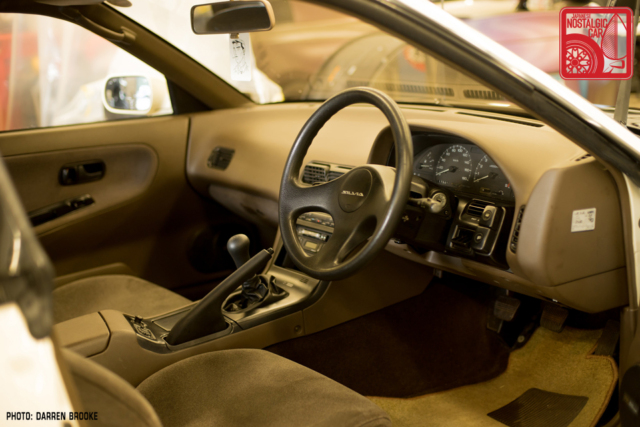 The interior of the S13 looks like it just left the Nissan Bluebird Store at which it was originally purchased. The common dashboard bubbling has been completely avoided and the car retains all of it’s original functionality. Even the Japanese factory stereo has been kept in place. Luckily, Hiep’s favorite radio stations are below 95.1 MHz FM so no change was necessary. The only modification is a Bunta Fujiwara air freshener keeping watch over Hiep as he blasts down the river roads of Minnesota. 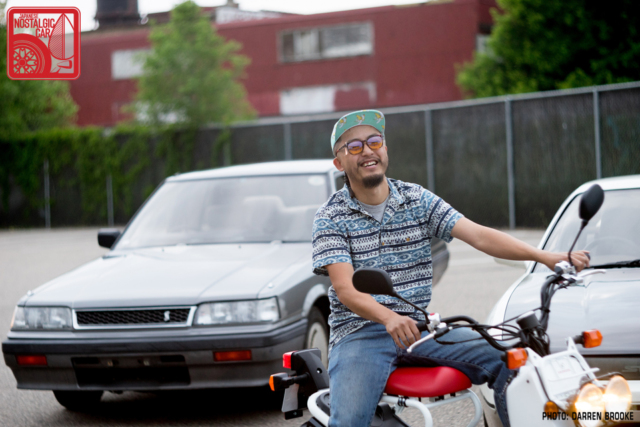 While some collectors aim for flawless representation of cars as they left the factory, a car with a unique story that you aren’t afraid to drive is more important to many young collectors than anything else. Hiep wasn’t aiming to acquire only Nissans, but rather has been collecting cars that speak to him personally. He isn’t trying to have the most clout while hard parked at a car show or trying to collect for an investment. Hiep buys them for the love of the cars. Sometimes, as enthusiasts, we take ourselves too seriously and don’t allow ourselves to have fun. That isn’t Hiep. Every time he’s around his cars he can’t keep himself from smiling. After all, isn’t that what we have these cars for?

11 Responses to PROFILES: Hiep Dang got these other Nissans instead of an R32