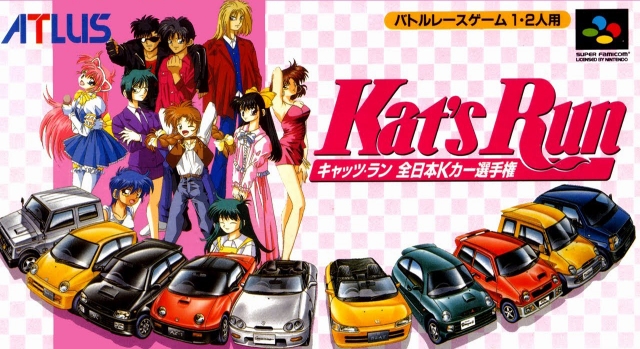 Have you ever played Mario Kart and thought, “I wish these were all kei cars.”? If so, we have a game for you. Kat’s Run: Zen-Nippon K Car Senshuken produced by Atlus Games in 1995 was available exclusively for the Super Famicom (Japanese for Super Nintendo) and featured a greatest hits of the best kei sports cars around. Unfortunately this game fell into obscurity during a flood of racing games that all came out around the same time. It’s worth understanding why this game got lost in the fray since it’s not a bad game by any means. 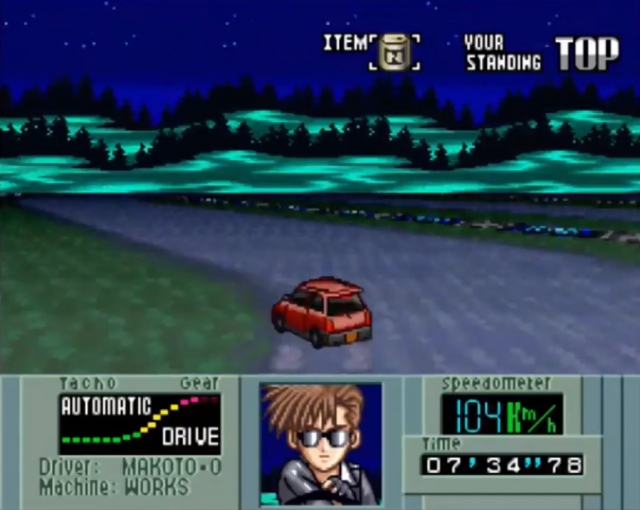 Before the rise of 3D games such as Tokyo Xtreme Racer and Gran Turismo, the de facto racing game was exemplified by titles such as Out Run, released by Sega in 1986. Such games gave an illusion of a 3D world, but was largely a rail racing game — you could change lanes but it wasn’t a true 3D environment.

In 1992 Nintendo’s Mario Kart changed the market with its 3D tracks, multiple opponents and power-ups scattered throughout the course. Other developers began copying the same basic formula and by the mid-1990s games like F-Zero and Ridge Racer were only a couple of the standouts from the seemingly hundreds of racers trying to capture the success of Mario Kart. These games built upon the basic arcade style blocks of Mario Kart and gave players real 3D worlds to race through. This is where Kat’s Run comes in. 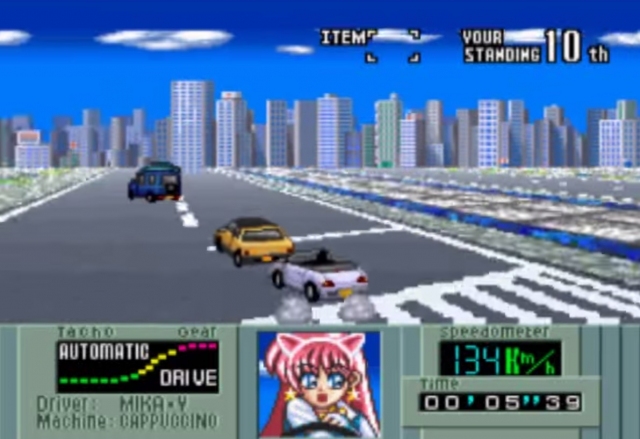 Kat’s Run offered other cars that you were racing against, featured oil slicks and power ups, much like Mario Kart, but implemented nearly seamless locale changes à la Out Run. The game itself was a pretty fun racer, but it got lost in the fray against stiff competition. Luckily, I feel like time has treated the game well, and looking back, it’s a very fun title, if a bit short by modern standards.

The biggest draw of the game was a who’s who of cool, licensed kei jidosha of the era. Compared to Gran Turismo — which would come out two years later — the list is short, but for a Super Famicom game it’s actually quite substantial. 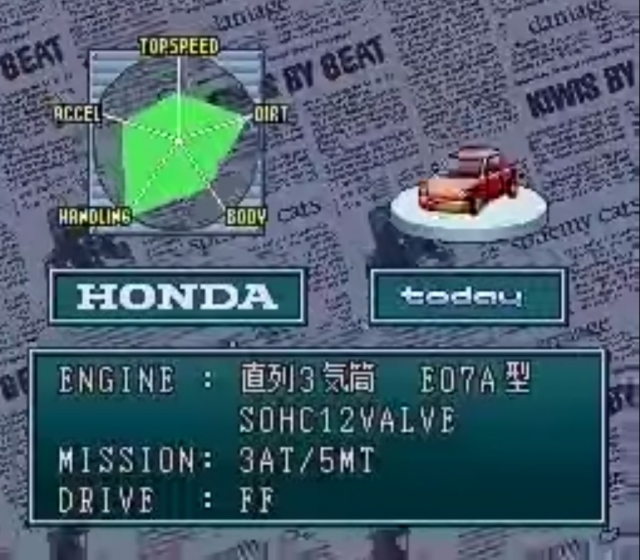 What is really overlooked about this game is that each car had its own strengths that came in helpful during various stages. While an Autozam AZ-1 was the highest performing on tarmac, it was next to useless compared to the Jimny during one of the dirt stages, while the Alto Works was a good middle-ground car that did an acceptable job on all stages. You could really suit your car to your play style, and that was quite ahead of its time. This concept of strengths and weaknesses was played with in other racing games but, prior to Gran Turismo, the effects were largely negligible outside of Kat’s Run. 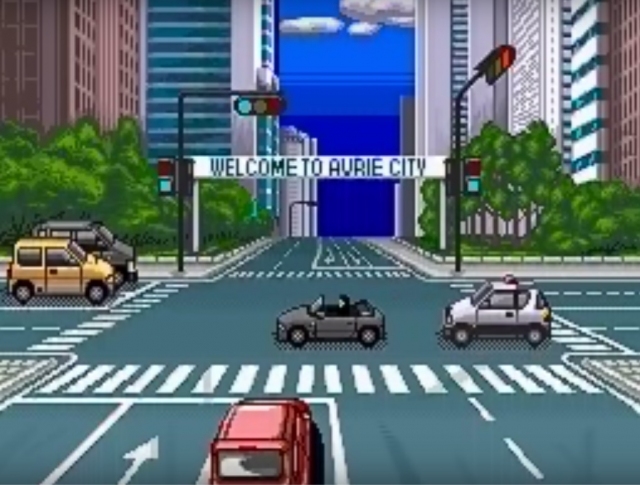 In addition to choosing the cars in the game, you can could your driver. Each of them were anime-style characters with pretty clear reference to Kousuke Fujishima’s You’re Under Arrest! and other popular anime series of the era. There were some other You’re Under Arrest! references throughout the game, including a police car driving by on the main title screen that looks a lot like Miyuki and Natsumi’s car. 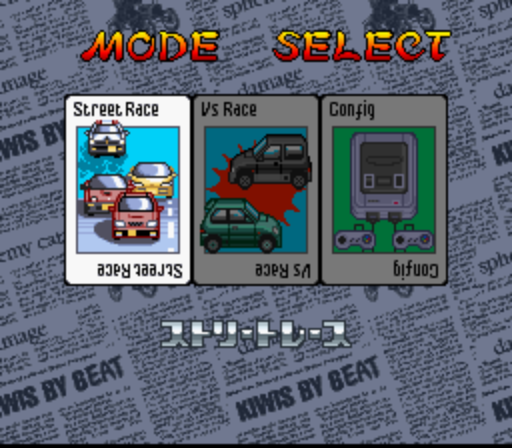 Today Atlus Games is still around, but only in name as they’re now a subsidiary of Sega. Their most well-known modern titles are the Persona series, which is a cell-shaded anime style J-RPG game, and some various remakes of classic games. Kat’s Run, however, is so obscure it most likely will be spared from a modern remake.

That’s totally alright, too, because part of the experience Kat’s Run offers is the beautiful 16-bit graphics. At the time such graphics were considered lackluster and plain, and not long after it came out graphics would evolve to the 32-bit style of the N64 and original Playstation. Today, however, if you compare them to the graphics of the first Gran Turismo, they stay far enough out of the uncanny valley that they’ve actually aged quite well. 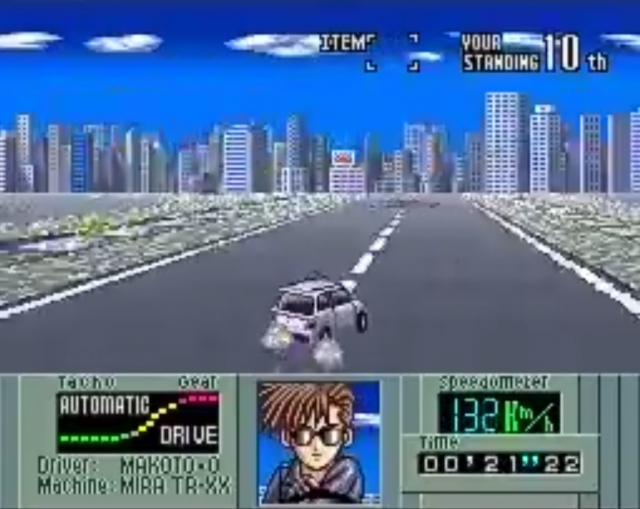 Despite tepid reviews from the era, Kat’s Run was among the best racing games around, utilizing licensed vehicles prior to Gran Turismo in 1997. If you have a Super Famicom, this game usually goes for around $20-30 on eBay if you can find it; otherwise there are various emulators available for PC, but they won’t give you the same effect of being physically tethered to the television like only an old school console can provide.