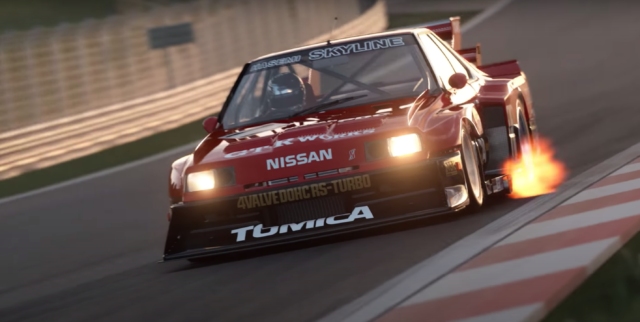 After a 23 year absence, the fire-breathing Nissan Skyline Super Silhouette race car is back in Gran Turismo. The iconic race car is part of the July 2022 free update to GT7, making its long-awaited return to the franchise. This time, it’s one of over 400 so-called “super-premium quality” cars, which have significantly greater detail and high-fidelity engine sounds. It’s a fitting treatment for one of Japan’s most recognizable racing machines.

The last time the Group 5 Skyline appeared in a Gran Turismo game, Keanu Reeves was fighting AI in The Matrix. Listed at 555 horsepower, it was a beast and one of the quickest ways to earn money in the game. All you had to do was win a quick three-lap  jaunt on Tahiti Road in the ’80s Sports Car Cup and the Silhouette Foumula (it was misspelled like that in the game) was yours.

You could sell it for a cool $125,000 and buy CRXes and Silvias to your heart’s content. Of course, in real life you would never part with that car for such a pithy sum. Incidentally, the car was offered in blue in a demo version of GT2, presenting an interesting “what if” scenario.

Unless they suddenly decide to re-release the ’82 Toyota Starlet Turbo, as of this writing the Nissan Skyline Super Silhouette holds the record for longest gap between game appearances. Why Polyphone decided to wait three console cycles before bringing it back is anyone’s guess.

The real car is a legend for many reasons. Along with its Group 5 compatriots, it marked Nissan’s return to Japanese road racing after the 1972 oil crisis. It was driven by Masahiro Hasemi, a legendary figure in motorsports, and its wild look inspired a generation of bosozoku. Due to the short-lived racing series few outside of Japan got to see the Silhouette Skyline in glorious action. Thanks to GT7, you can now experience the next best thing.