NEXT VERSION: Can you name these classic Toyota racing liveries? 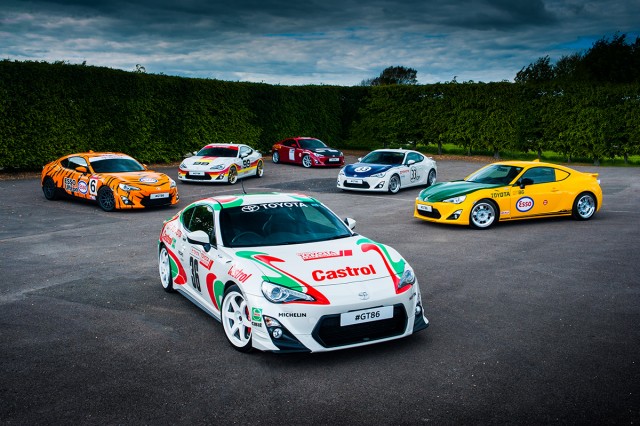 In preparation for the upcoming Goodwood Festival of Speed, Toyota UK has prepped six GT86 (known here as the Scion FR-S) sport coupes in racing liveries from the company’s past. Can you name them all (answers below, no peeking!)?

1966 Yatabe Speed Trial 2000GT: In its distinctive green-on-yellow, this car pays homage to the moment Toyota announced its presence to the world. Prior to the 2000GT’s global launch, Toyota took its supercar to Yatabe Test Circuit for a 72-hour endurance run that not only broke 16 FIA world endurance and speed records, but did so in the pouring rain. A couple of years ago, Toyota Japan dressed up a Lexus LFA in the same livery.

1968 SCCA 2000GT: In 1968 renowned creator of the Shelby Cobra, Mustang and Daytona helped launch Toyota USA’s motorsports program with a trio of 2000GTs in SCCA road racing. The blue-on-white car was driven by Davey Jordan wearing the number 23. However, if you look closely this GT86 is bears the number 33 in its roundel, the racing digits of Jordan’s sister car, a red-on-white colorway piloted by Scooter Patrick, cleverly allowing one car to pay tribute to both 2000GT racers.

1972 RAC Celica 1600GT: In Europe, where rally racing is held in foremost esteem, Swedish driver Ove Andersson came up with the idea of chucking Toyotas through the dirt. The black bonnet-on-red Celica took first in its class in Great Britain’s 1972 Royal Automobile Club (RAC) Rally, but soon the 1973 Oil Crisis made motorsports activities unseemly in socially-conscious Japan. Toyota struck a deal with Andersson that would allow it to continue somewhat indirectly in rallying, eventually leading to the formation of Toyota Team Europe.

1981 IMSA GTU Celica: In the 1980s nothing was hotter than IMSA GTU, also known as the Camel GT series. Two A40 Celicas were built by TRD Japan and sent to compete in the American racing series. The Celicas arrived just in time for the lifting of Toyota’s international motorsports freeze, and Toyota eventually graduated to GTO and GTP classes, all while wearing classic red, orange and yellow-on-white warpaint. many of these cars are still preserved in the Toyota USA Museum.

1994 WRC Celica GT-Four: The unmistakable red and green-on-white livery courtesy of Castrol Oil carried Toyota into the all-wheel-drive era of rallying, with turbocharged Group A cars that led to the homologated GT-Four street cars. Despite an illegal turbo air restrictor that got the team disqualified from WRC for 12 months the color scheme is still fondly remembered by rallying fans of that era.

1999 JGTC GT500 Supra: In the late 90s and early 2000s, the Japan Grand Touring Championships was the ultimate race series for fans of Nihonese sports cars. At the peak of the supercar-demolishing tuner craze these 500hp Supras (and NSXes, RX-7s and GT-Rs) were the ultimate expression of Gentlemen’s Agreement-flaunting roadgoing mechas battling for the pride of Japan’s top automakers. Esso Ultron’s 1999-2000 tiger-stripe livery, immortalized in Gran Turismo, was the only be-winged orange Supra for true JDM fans who knew The Fast and the Furious was a load of crock.

10 Responses to NEXT VERSION: Can you name these classic Toyota racing liveries?