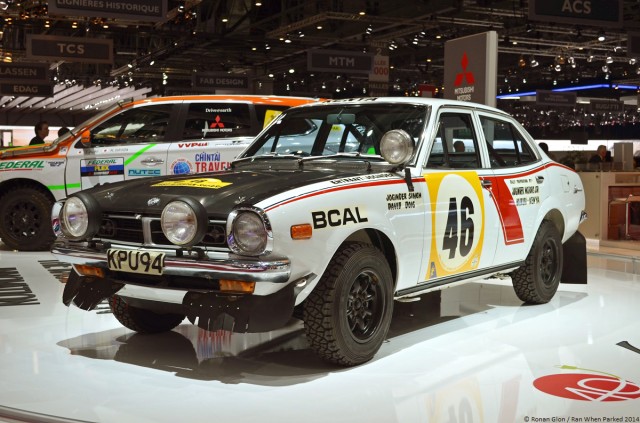 The Geneva Motor Show is happening in Switzerland right now, and unless you’re into hideously modified exotics there’s not much of interest to the typical JNCer. Except, that is, if you happen to wander into the Mitsubishi booth where the the humble winner of the 1974 East African Safari Rally stands on display in honor of the Triple Diamond’s 40th anniversary in Europe. 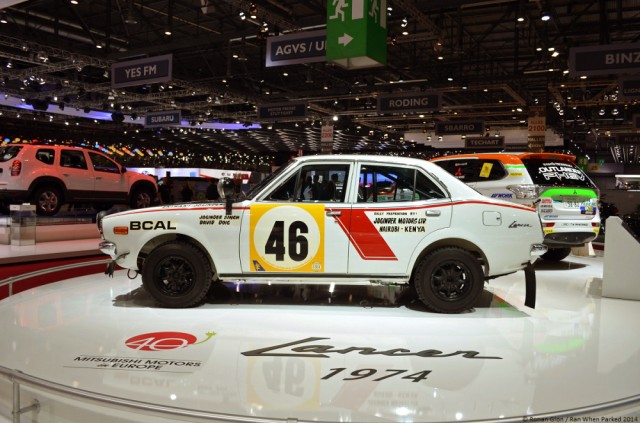 In the late 1960s, Mitsubishi wanted to prove its mettle in the wide world of motorsport. Unlike its domestic rivals such as Toyota and Nissan however, they eschewed the overcrowded grids of circuit competition and focused instead on frame-pounding rallies. They had already campaigned Colts and Galants starting in 1967 and although victories were sporadic, the experience allowed the company to develop a winning formula when the 1973 Lancer debuted in Japan.

A sub-compact sedan, the Lancer looked positively plain-Jane compared to the modern, bewinged Evos that would follow. The base 1200 came with a 73-hp SOHC four and a four-speed manual to haul its just-over-1800-pound mass. A mid-level 1400GL fared slightly better with a 90-hp engine. The top-spec 1600GSR that provided the foundation for the rally racer, however, had 110 horses strapped to a fifth gear. 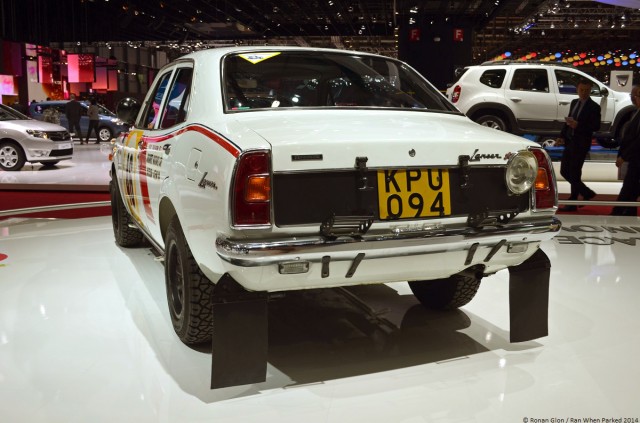 Very little set the production 1600GSR apart from its race counterpart. The main difference was its modified single overhead cam and freer-flowing headers, helping the aluminum-topped mill produce an impressive 165hp. Aside from that, a rudimentary roll cage and 13-inch rims shod with off-road tires, the little dirt devil was bone stock. Which, if you think about it, makes it all the more mind-boggling that it downright owned the world’s most grueling rallies of the mid-70s.

Straight out of the box in ’73, Mitsubishi entered the Lancer in the eighth running of Southern Cross and captured a sweep of the top four places with driver Andrew Cowan at numero uno. But, the Australian rally wasn’t part of the official WRC calendar and Mitsu knew that if it wanted to grab the world’s attention it would need a win at an FIA-sanctioned event.

Thus, the car on display in Geneva was entered into the East African Safari Rally of 1974. A tortuous, 6000-kilometer five-day trek through the unpaved terrain of Kenya known as the “car-breaker,” drivers had to contend with not only flash floods and dust storms, but also the occasional wayward wildebeest. At the hands of Joginder “The Flying Sikh” Singh and David Doig, the Lancer charged straight into a first place finish.

Throughout the mid-70s, various A73 Lancers driven by Singh, Cowan and Kenjiro Shinozuka persisted in racking up numerous first place finishes at Southern Cross, Safari and other historic rallies like Ivory Coast and 1000 Lakes, often taking multiple podium positions and beating out far more powerful Porsche 911s and Lancia Stratos HFs. The Lancer’s durability and mastery of the Safari catapulted the car into hallowed circles in Africa where it was bestowed with the nickname “King of Cars.” Perhaps the proudest moment came when in 1976, Singh piloted the King to a championship finish while two other Lancers swept the remaining podium positions.

Photos courtesy of Ronan Glon of Ran When Parked.

permalink.
This post is filed under: mitsubishi and
tagged: lancer, mitsubishi, rally.