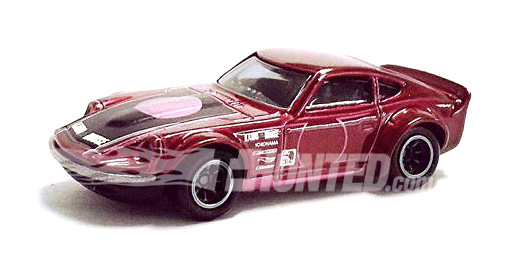 An image of a new Hot Wheels S30 Z have surfaced, but there is a bit of mystery surrounding it. Since the JNC inkan appears on the door, we are privy to some extra information that was was leaked. First, it will show up as a 2016 basic model, and it is patterned after Hot Wheels designer Jun Imai‘s own 260Z, complete with massive flares and G-nose done up in true kaido racer fashion. However, like Jun’s real car, the model was supposed to be blue.

The fact that it is maroon and wearing wheels usually found on premium models indicates at first glance that perhaps this is something a factory employee may have “custom made” on the assembly line and leaked. However, our resident minicar expert Ricky thinks the pink pinstripes indicate it may be test shot with a second color or a real recolor after all. Hmmm.

Next we have a leaked images of the new kenmeri Nissan Skyline, to be found in the 2015 Heritage series. Cars in this premium line have already included the Datsun 240Z, Datsun 510, and hakosuka Skyline. This will be the last Japanese classic in this nostalgic Nissan-heavy line.

Last but not least, this Saturday is yet another K-Day, in which Kmart stores across the country will offer exclusive variations of select Hot Wheels cars. This time, a light-blue SA22 Mazda RX-7 and gray Honda S2000 will be offered. These will be available at Kmart this Saturday (or online at Kmart.com), and sales start at 9 AM local time, so be prepared. For a tutorial on K-Days, check out this old article by Ricky. Good luck!