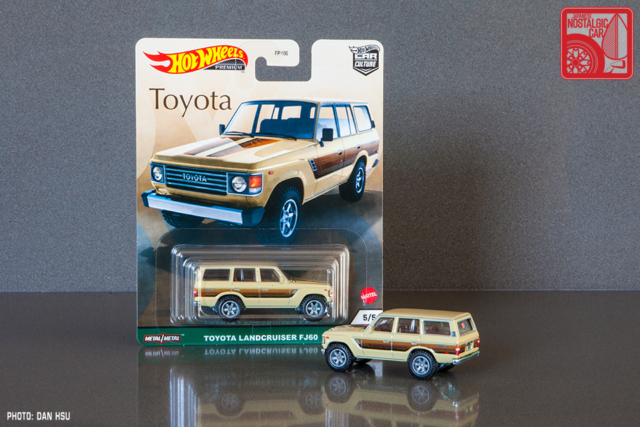 We got an extraordinarily positive response about the Hot Wheels FJ60 Toyota Land Cruiser yesterday. As you can see from the packaging, it’s part of an all-Toyota premium series. We promised there would be some new castings in it, and we’ve been given the go-ahead from Mattel to disclose the other cars in the series, so without further ado. 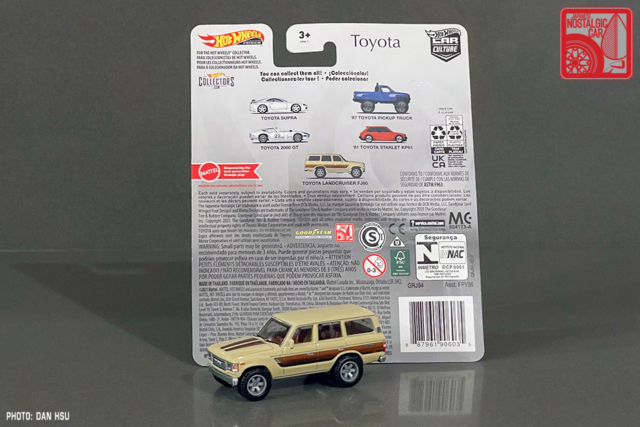 As you can see, the FJ60 is in good company. There’s a lightly modified JZA80 Supra in all-white, a classic color scheme that’s reminiscent of a TRD shop car or something similar. Next up is a blue RN61 Toyota HiLux that looks like something Marty McFly would kill for, with gigantic off-road tires that will end up lifting even higher than our FJ60. 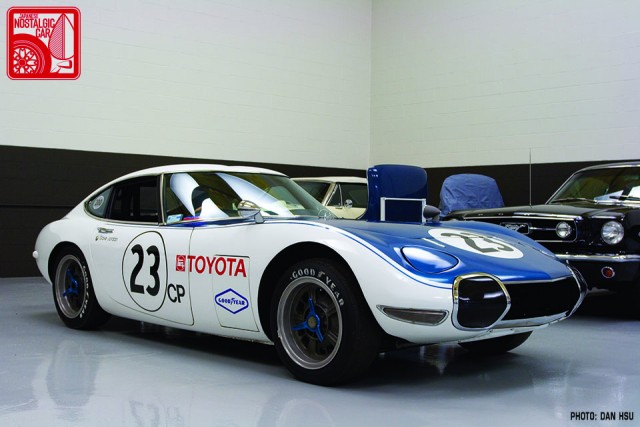 Then there’s the classic Toyota 2000GT, but this time it’s decorated in the graphics of one of the Carroll Shelby-built SCCA race cars. The blue and white No.23 car was driven by Dave Jordan, and is going to make a great complement to the red variant No.33 car driven by Scooter Patrick that was released as a Redline Club edition in 2015.

Next up is a KP61 Toyota Starlet, another new casting making its debut in the series. Slammed on SSR MkII-style wheels with fender flares and a rear rooftop wing, it’s your prototypical Toyotafest build. Last but not least is our FJ60 Land Cruiser to round out this series of Aichi steel.

Mattel and Toyota had been working through some licensing issues, which explained the dearth of Toyota castings a while back. Now that they’ve been resolved, the floodgates are wide open for diecast Toyotas once again. You’re going to be seeing a lot more of them in Hot Wheels form soon.

4 Responses to MINICARS: Here’s the cars from the upcoming Hot Wheels Toyota series