KEI HERO: The Suzuki Cappuccino is to the Miata what the Miata is to all other cars 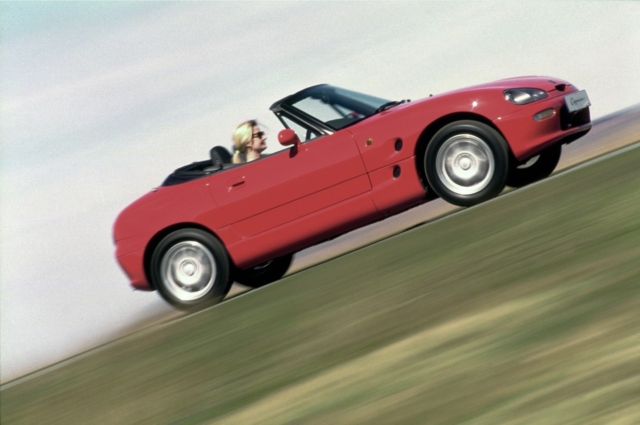 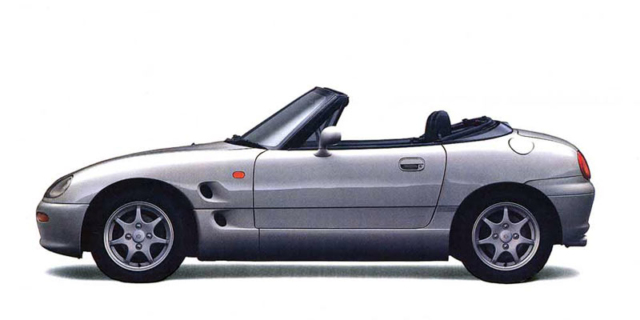 In fact, the Suzuki Cappuccino may be the purest roadster money can buy. It takes the concept of the Mazda Miata and scales it down to a smaller and more unadulterated experience. It’s smaller, less powerful and punches even higher above its weight than the Miata does (relatively speaking of course). If the Miata takes the place in the automotive kingdom of a Lotus Elan, then the Cappuccino fills the hole left by the Austin-Healey Sprite. In fact, it’s almost the exact same dimensions as the frogeye and about 95 percent as cute as well. 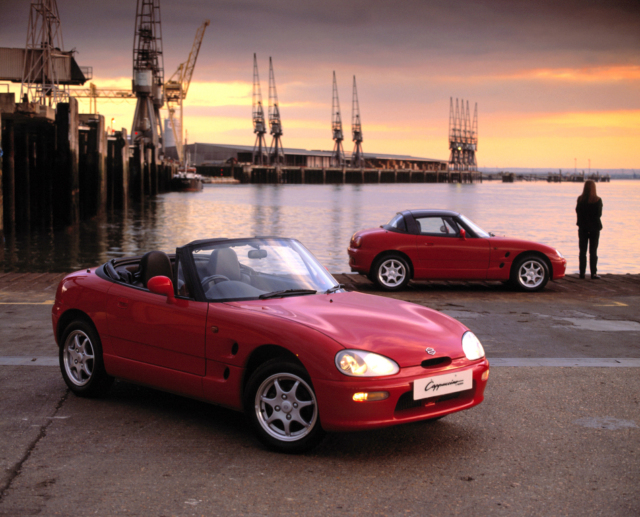 While the Cappuccino doesn’t look as positively stoked to see you as a Sprite, it’s the actual ownership experience that makes it one of the roadster greats (and Suzuki’s excellent customer service is only part of it). Suzuki’s motto during production was “fulfilling one’s dream of owning a stylish and very affordable 2-seater sports car.”

Placing it in the kei class, with its relaxed taxation and ownership costs made it more attainable for the general Japanese public. It also made it easier to produce without 800 pounds of of equipment unrelated to the driving experience. As the story goes, the name Cappuccino was chosen because Suzuki thought the car was like a fancy drink in a small cup.

The rash of kei sports cars that were released at the peak of the Bubble Era was the product of manufacturers having a performance war with extremely strict kei regulations on physical size and engine displacement. The result was some very creative engineering and a focus on driving dynamics over outright power. Indeed, the Cappuccino had some stiff competition during its production, in the form of the Autozam AZ-1 and Honda Beat, together affectionately known as the ABC trio. 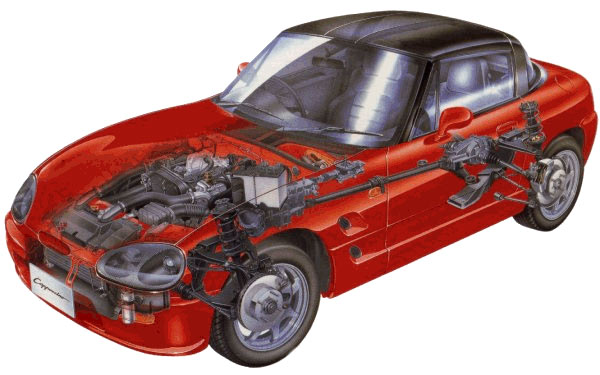 The Cappuccino originally launched with the iron block F6A inline-three engine the same astounding found in the Suzuki Alto Works. However, the advertised 63 horsepower can be easily increased to nearly 100 without digging into the block or adding a large, lag-inducing turbocharger.

Yes, we are acutely aware of how trifling 63 horses sounds, but even in stock form the Cappuccino will leave any driver with a smile on their face. At just 1,540 pounds, it weighs 530 pounds less than the original Miata. The 657cc engine powers it to highway speed in just over 8 seconds. For comparison, that’s about two seconds quicker than an AE86. 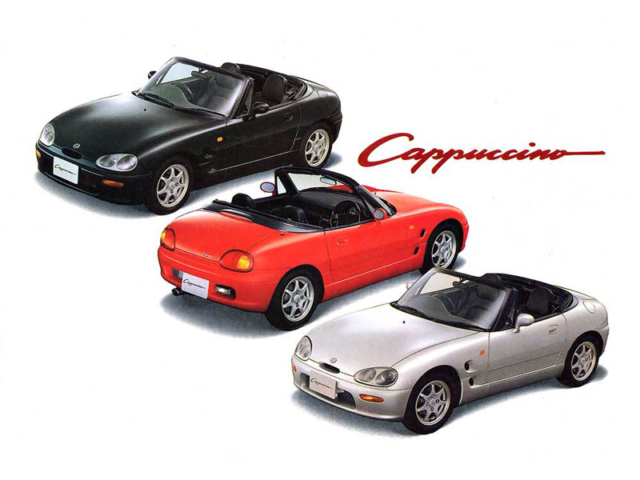 Ultimately, though, the key to the Cappuccino is its handling. While the Beat and AZ-1 use exotic car mid-engined layouts, the true driver’s car is the Suzuki. With its front-midship layout placing the engine behind the front axle, with two passengers aboard the weight distribution was a perfect 50/50 front and rear. It was the first kei car to employ a four-wheel independent double wishbone suspension, with extensive use of aluminum. Even 25 years later, Caps can still be seen at track days and time attacks. 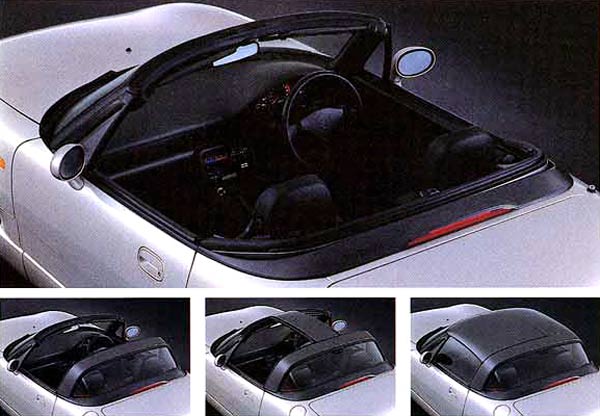 In the late 1980s, Japanese carmakers loved designing a single chassis that was as modular as possible, so you didn’t have to commit to a coupe or pickup when you could have a hatchback or SUV. The Cappuccino’s engineers held to this philosophy as well, with a roof that could be a hardtop, targa, t-top or full convertible. 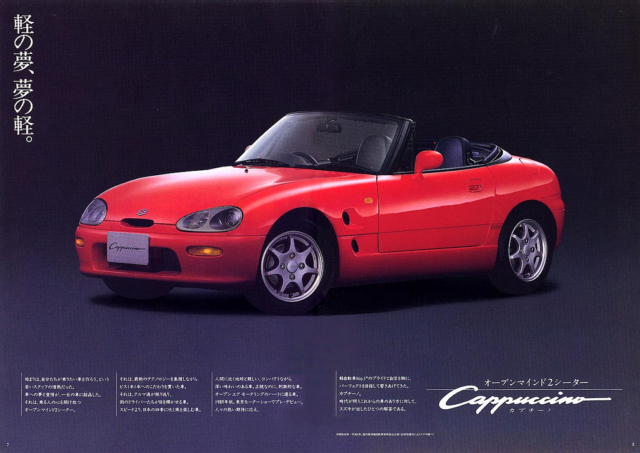 As perfect of a vehicle as the Cappuccino was, there was one massive variable that Suzuki couldn’t control nor could they have foreseen. In 1990 the Japanese stock market lost 35 percent of its total value and asset prices fell off of a cliff. Eighty-eight percent of Cappuccinos sold with the first two years. For the remainder of its seven-year production run, sales trickled, but then the Cappuccino got another market opened up to it, this time in Europe.

Suzuki of Great Britain was interested in bringing the Cappuccino to the UK, and convinced Suzuki to show the car at the 1992 British International Motor Show. It was a knockout hit. The Cappuccino was dubbed the “Best Sports Car under £20,000” and “Best of Show” by the Institute of British Carriage and Automobile Manufacturers, the UK’s equivalent to the SAE at the time. Just shy of 1,200 cars were sent to Suzuki of Great Britain. All but 150 of the allotment were sold, with the remainder making their way to continental Europe.

In 1995 Suzuki began a second phase of the Cappuccino, chassis code EA21R, with a new K6A aluminum block engine and some additional upgrades. The lighter engine received timing chains, and Suzuki found room for increased torque and lighter wheels. An available limited slip differential and optional ABS made for an even more exhilarating drive (though, less desirably, an automatic transmission was offered as well). 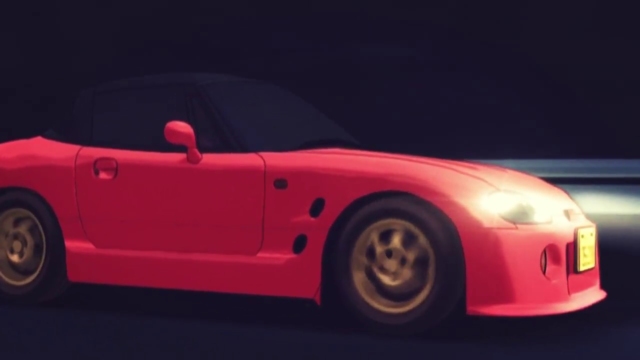 Unfortunately, the Suzuki Cappuccino was phased out in 1997 during the great sports car culling of the era. By the late 90s, Japanese firms were beginning to concentrate more on multi-purpose utility than specialized cars, and a sporty roadster the size of a shoe certainly fell into the latter category.

However, enthusiasts’ love for the Cap didn’t wane so easily. It was routinely seen in video games and TV through the end of the century and well into the aughts. It appeared in Sega GT, Tokyo Xtreme Racer, Kat’s Run, and of course Gran Turismo. Also, who could forget its appearance in Initial D: Fourth Stage episodes 10 through 12 when Sakamoto’s Cappuccino is referenced as a “Hachiroku Destroyer”? 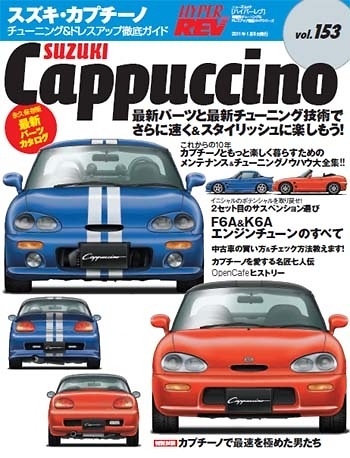 The odds that these pop culture references helped the Cappuccino stay relevant are the same as that of Sakamoto defeating Takumi in a touge battle: near 100 percent. As such, in the Japanese aftermarket the car was popular enough to have an entire Hyper Rev volume devoted to it. Once it hit 25 years old, Americans finally had the chance to import it alongside ABC brother, the Beat.

When the Cappuccino came to American shores under the 25 year rule, it was an instant hit. Those outside the know found these cars to be “cute” at first glance, but once they drove them the reviews proved otherwise. Even a 6-foot, 250-pound driver can fit in one without much more discomfort than sitting in a Miata. While most owners prefer to leave them original a handful of have made their way into the hands of road course racers, and with 100-horsepower mods, they’re giant killers. 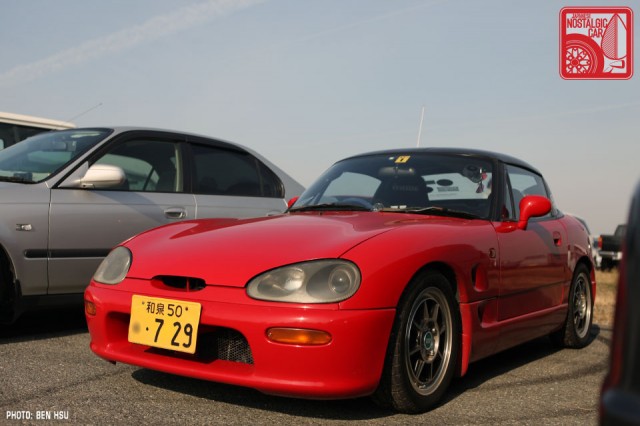 Today, the Cappuccino is experiencing more global popularity than ever. To select American buyers, a car that out-handles a Miata, has a 125 mph top speed with minimal modifications and still gets 40 mpg is the perfect car at a price point of around $10,000 through a reputable importer. It was both the first of its breed and the last, and that is why the Suzuki Cappuccino is a Kei Hero.

Some images courtesy of Suzuki.

permalink.
This post is filed under: kei and
tagged: cappuccino, kei, suzuki.

6 Responses to KEI HERO: The Suzuki Cappuccino is to the Miata what the Miata is to all other cars