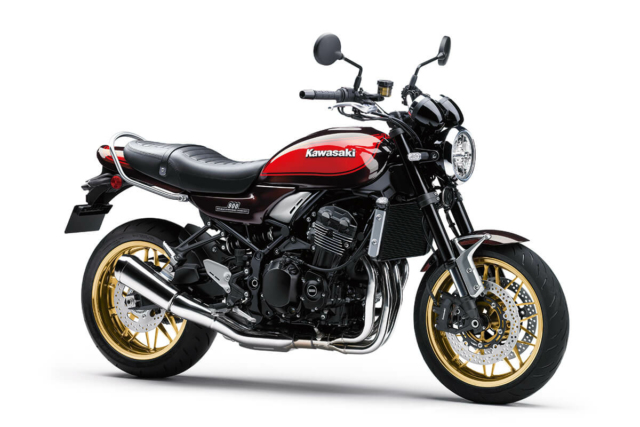 Everyone’s awaiting the heritage-infused Nissan Z, but there’s another iconic Z that is celebrating its history this year. The Kawasaki Z1 was the most powerful bike in its class when it debuted 50 years ago, in 1972. It was technologically advanced too, with a 900 cubic centimeters of DOHC fury, pushing the bike to a top speed of over 130 mph. We called it the Kenmeri Skyline of bikes, but in reality it was more like the JZA80 Supra, if such a thing existed half a century ago. 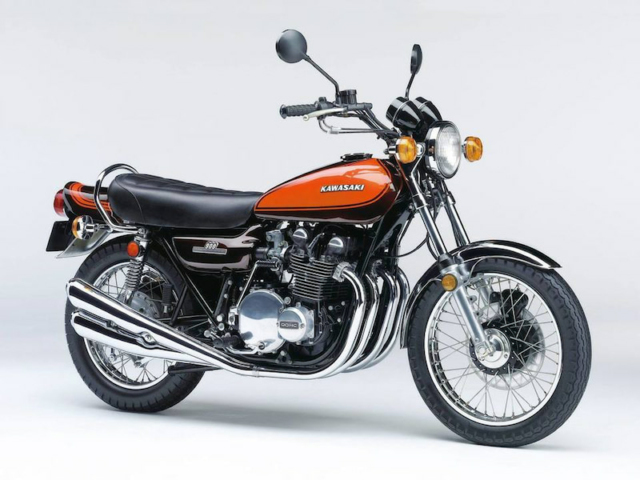 The Z1 was borne out of competition with Honda and its groundbreaking CB750. That motorcycle coined the term superbike, but Kawasaki wanted to out-super the superbike. So, they added another 150cc of displacement and twin-cam technology to their flagship. At the time only the MV Agusta 750S, essentially an Italian racing bike tuned for street use, had that kind of equipment. The Z1 cost half as much in the same way a 1993 Supra Turbo offered Ferrari performance for a fraction of the price.

The CB750 may have been the first superbike, but the Z1 became known as the King of Motorcycles. Not only that, but the Z1 came to define the Kawasaki brand, and launched the company on its performance trajectory. The Z line became Kawasaki’s flagship models for decades. 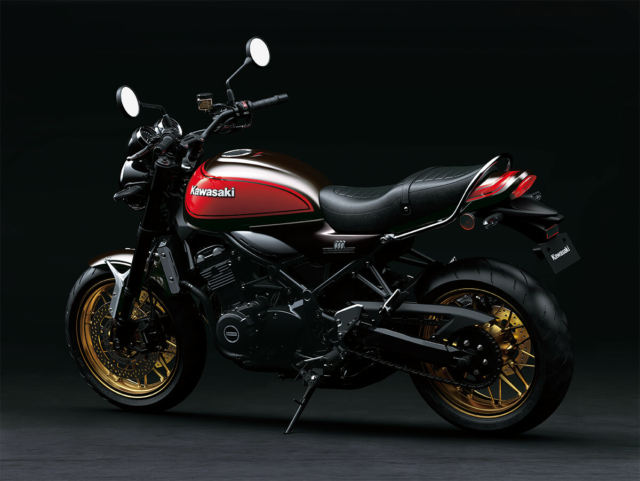 To mark the Z1’s 50th birthday, Kawasaki is issuing a bunch of anniversary edition models with cosmetic homages to the original. The most faithful of them is the Z900RS, which is itself already an homage to the Z1. Now comes in the Z1’s beloved “Fireball” paint scheme of red over deep brown. “Double Overhead Camshaft” emblems can be found on the side covers, just like on the 1972 model, and it comes with a chrome grab bar. 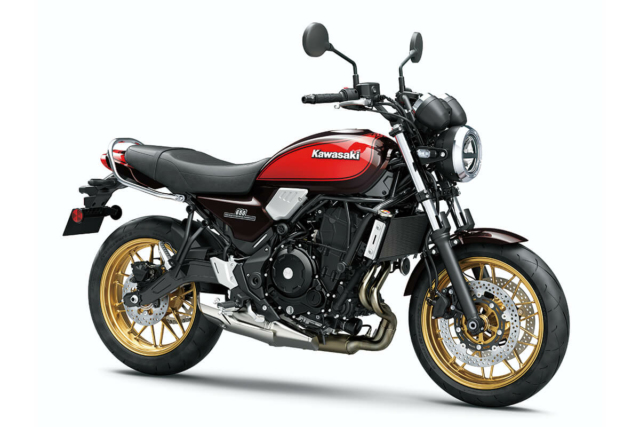 The 50th anniversary treatment also extends to the Z650RS, which debuted last year as a throwback to the 1976 Z650. Like the Z900RS, it features retro styling such as twin analog gauges for speed and rpm and around headlight (albeit LED). It, too, comes in a Fireball paint scheme. On both models, the gold wheels are a nod to the Z1’s golden anniversary.

In addition, Kawasaki is offering 50th anniversary editions of its supernaked Z900 and Z650. Both will come in Firecracker Red, a color made famous by the 1981 Z1100GP (left). Both will also feature gold “Z 50th Anniversary” logos and red wheels, while the Z900 also gets gold outer forks tubes. 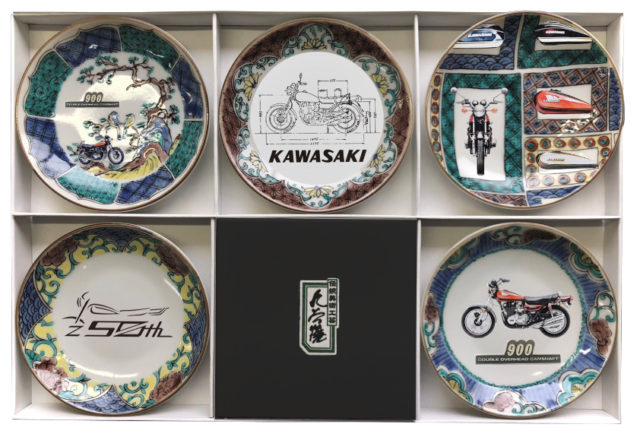 In Japan there’s a plethora of goods to go along with the anniversary. The peak item among them has got to be the $100 set of traditional kutani ware plates featuring images of the Z1 serenely posed among 350-year-old art styles. On the other hand, anyone who buys a 50th Anniversary model in the US will get a coffee table book about Z history. 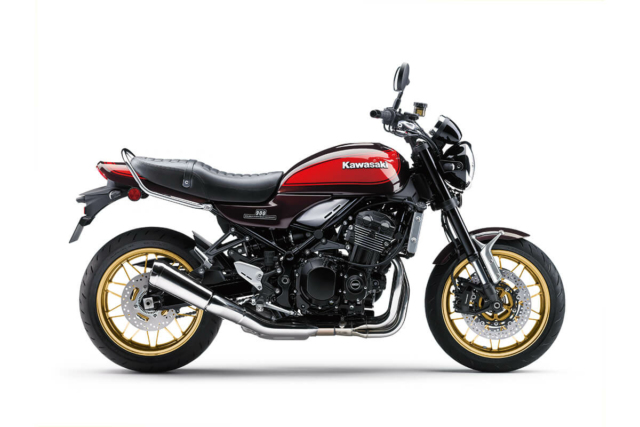 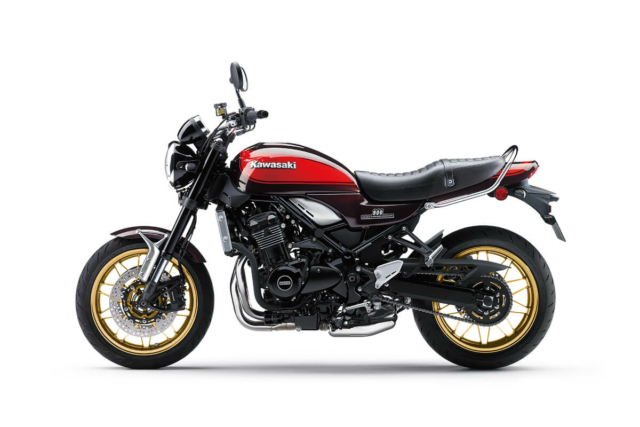 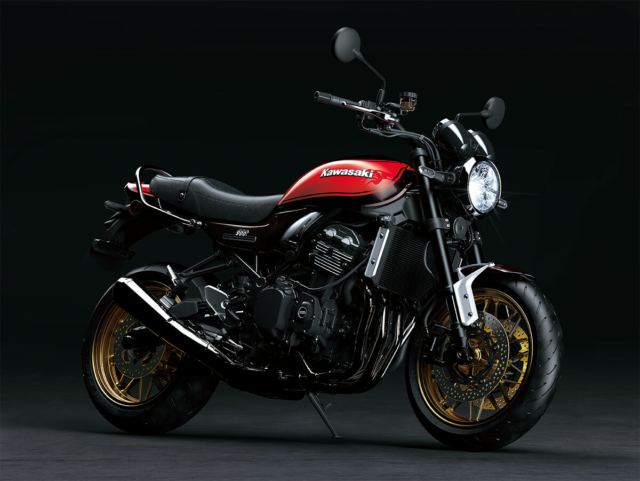 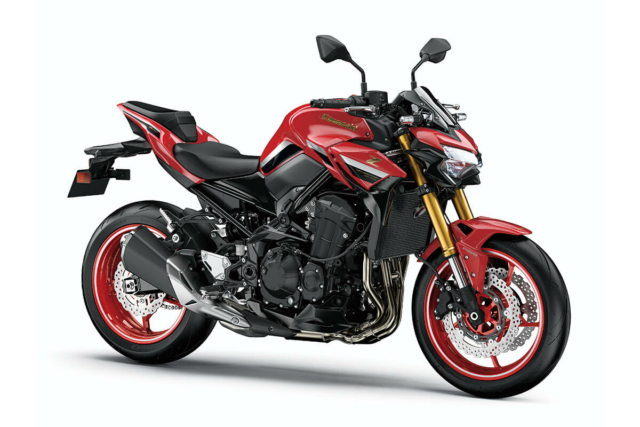 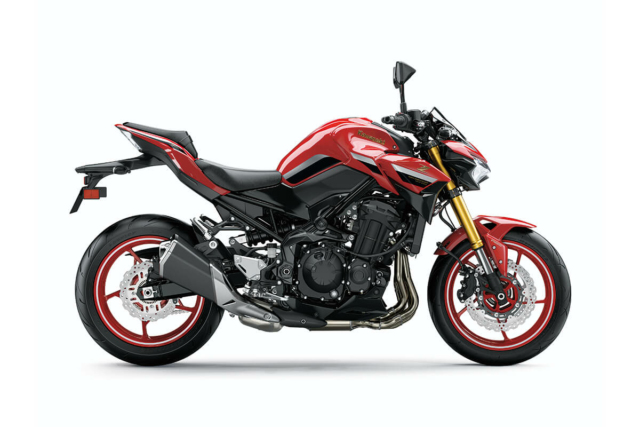 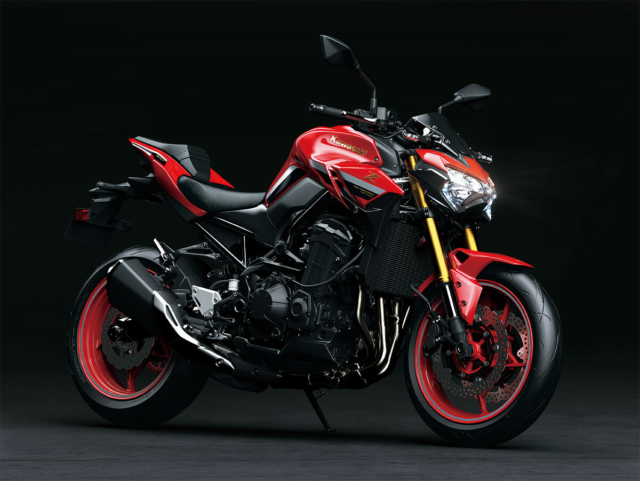 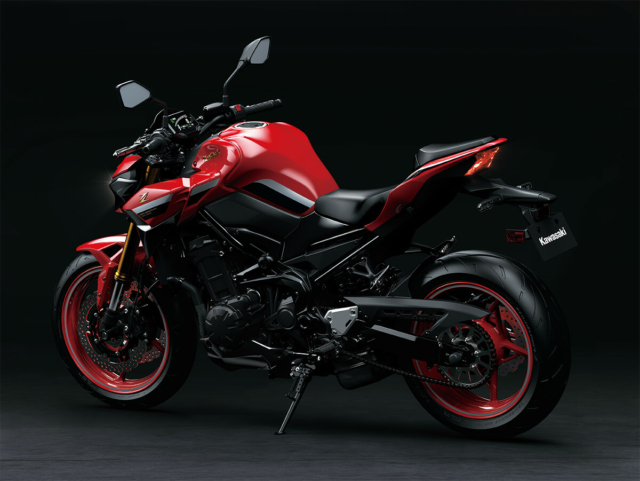 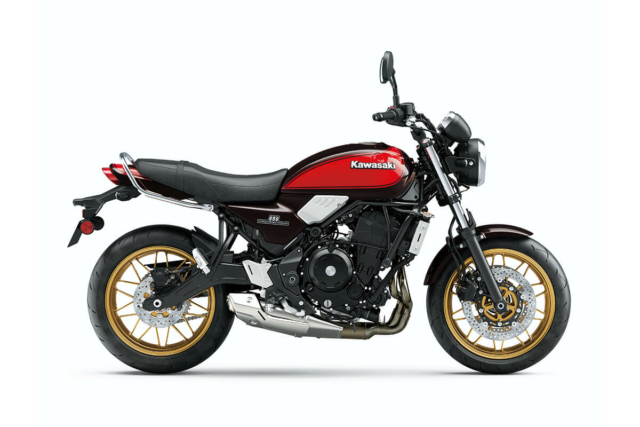 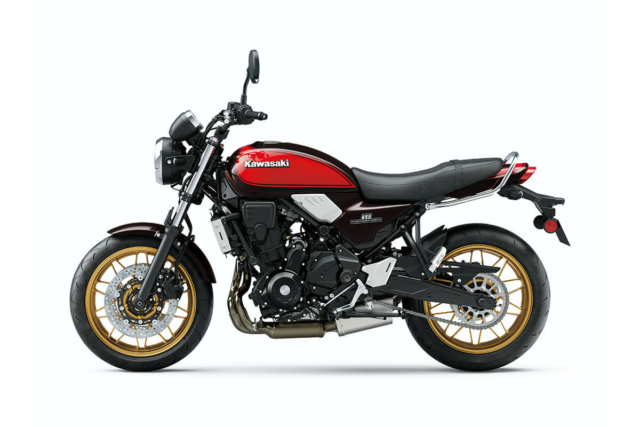 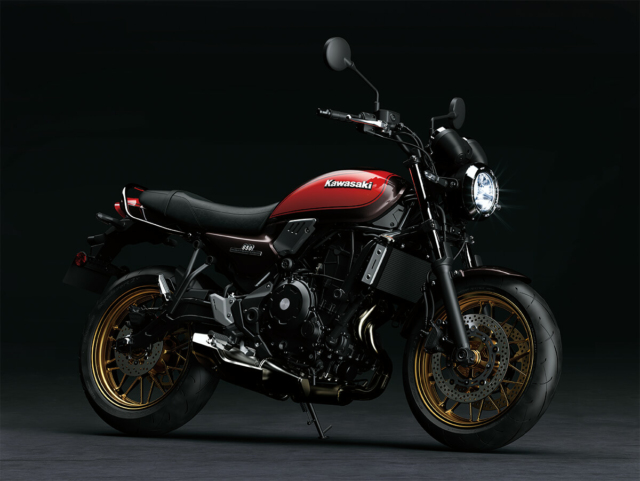 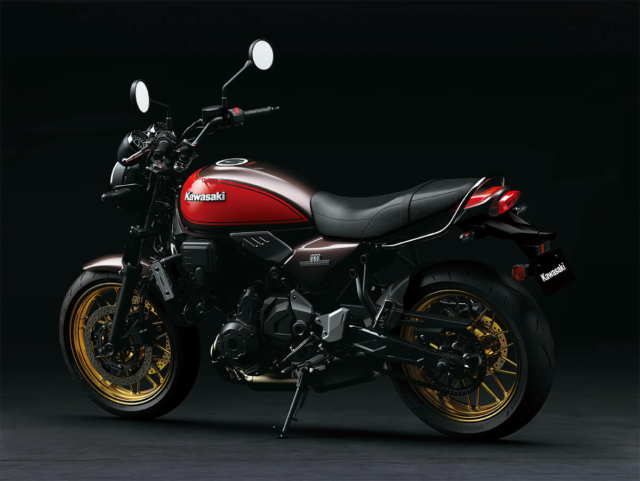 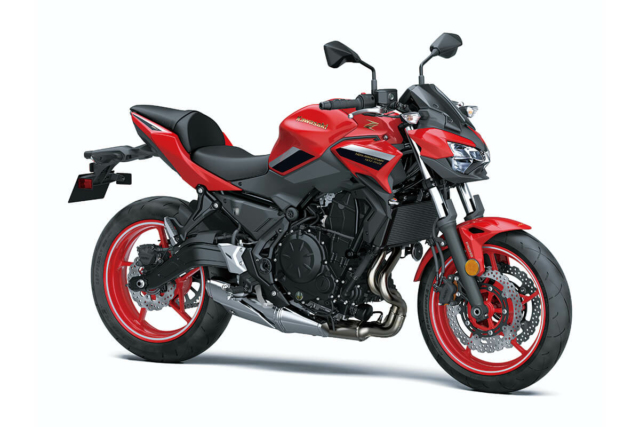 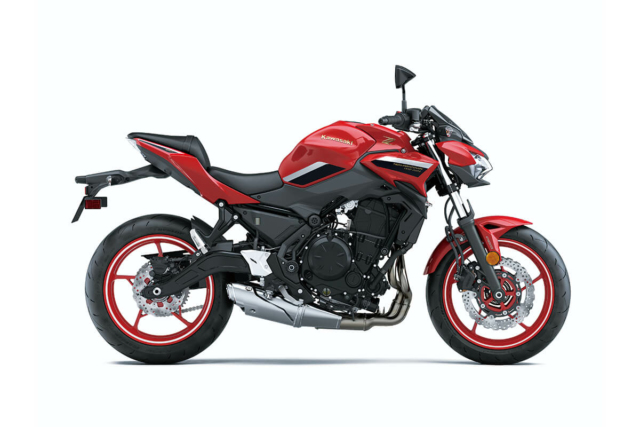 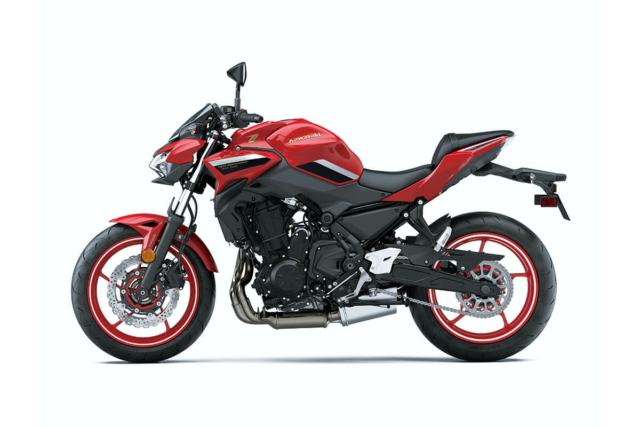 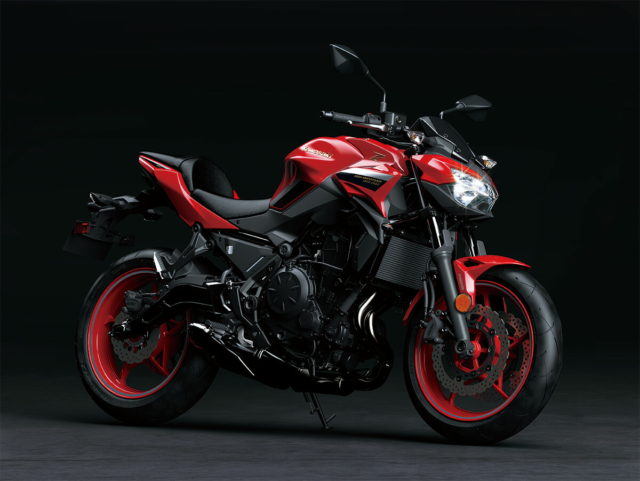 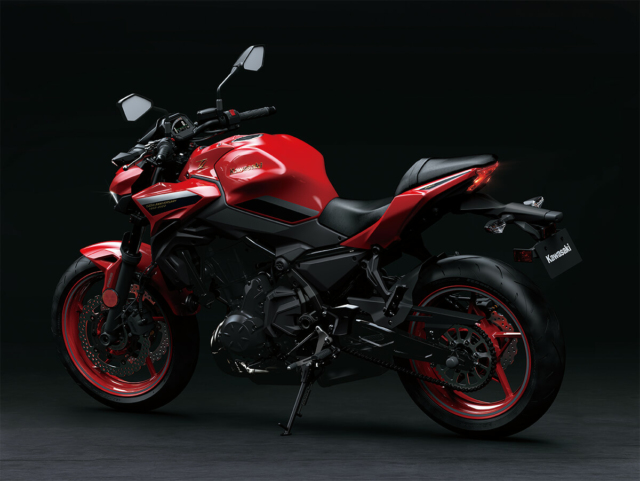