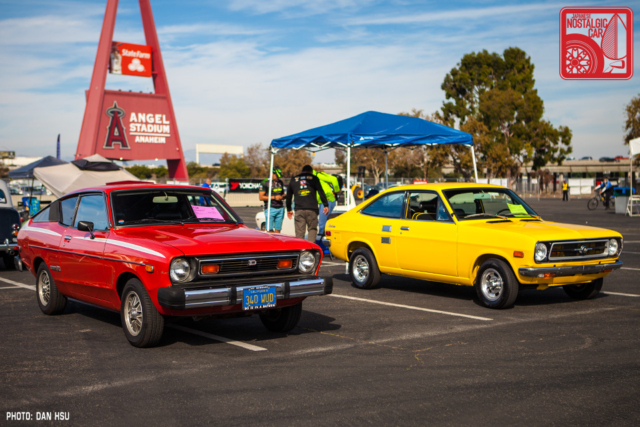 Some time off can do funny things. It can act as a reset. The in-person Japanese Classic Car Show was forced to go into a hiatus because of the pandemic last year, and forced to move to a new location this year. In the two years since we last had a live event a lot has happened. Upon its return to a new venue, Angel Stadium, where perhaps our lifetime’s greatest baseball player suits up, things felt different. Like Shohei Ohtani, who hails from Iwate Prefecture, Japanese cars feel like they’ve made it. 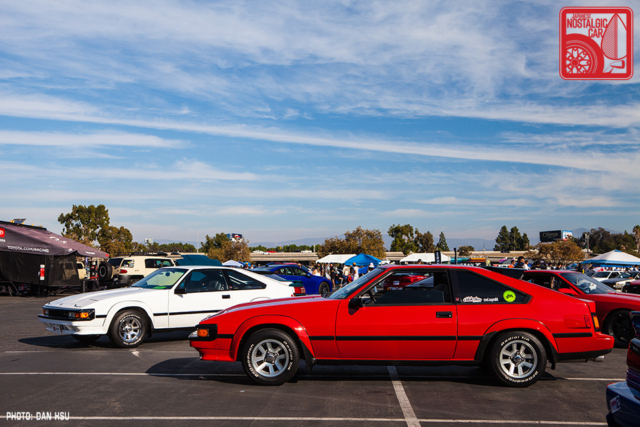 Nihon Steel is accepted as classic everywhere but the crustiest corners of the automotive kingdom. And if you look at some of the online auction sites, the prices they command often exceed those of their contemporaries from Europe and the US. Of course, values have been trending upward for many years, but with more cars than ever before pouring into Angel Stadium for JCCS’s return, the dam was bursting. 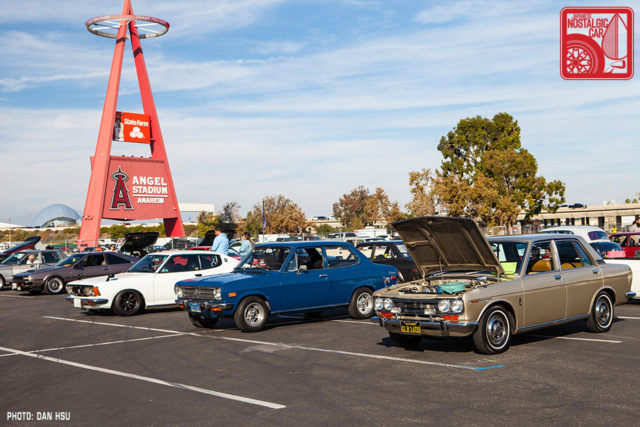 These are some of our favorites from the show. There’s not one kind of car that we like above all else. It’s a mix of preserved originals, rare specimens, and cars that have an X-factor that we feel represent a slice of Japanese car culture. Take the photo above, for example. You have three Nissans, a grandpa-spec 510 Bluebird GL sedan with whiteline tires, a rare Datsun 1200 two-door sedan in period American-style, and a clean but modified 610 Bluebird-U in typical Japanese street style. All three are a treat to behold and great in their own way. 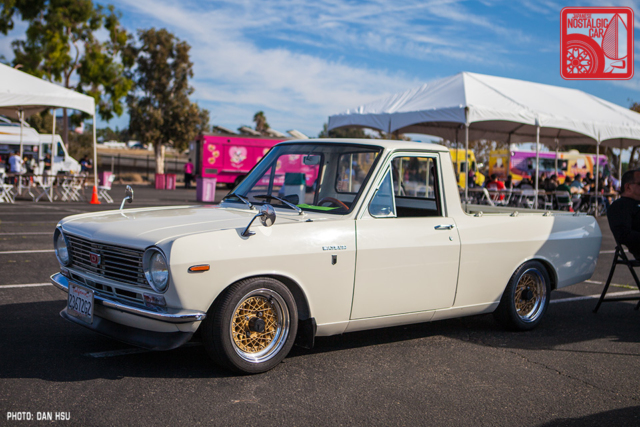 Sunny Trucks are hot right now, and there were several of them filling the ranks at JCCS. The B120, based on the B110-generation Sunny (like the blue one in the previous photo) is the most common in Japan and the de facto one we think of when we think Sunny Truck. Many were modified for maximum visibility (though thankfully the Hako-tora trend is waning).

This unassuming first-generation B20, however, takes the cake. The mods aren’t overly aggressive, and the far-less-common but still vintage Advan mesh wheels are a perfect match. B120s are great, and there needs to be more of them imported to these shores, but those are common in Japan as they were built from 1971-94 (and in South Africa until 2008). The B20, on the other hand, is rare anywhere, even in the motherland. 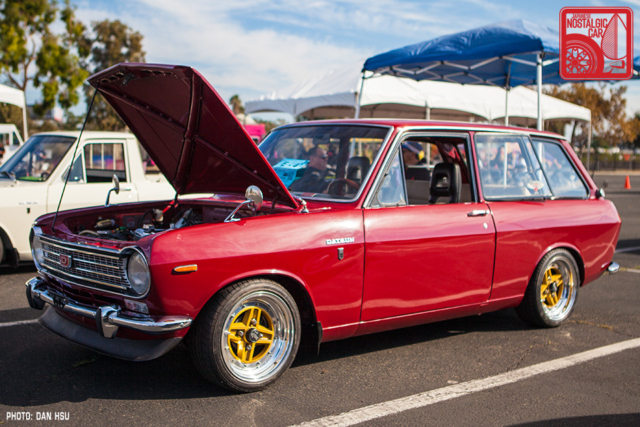 Similarly, Sergio Arenas’ 1968 Datsun 1000 wagon, in right-and-drive spec no less, is a total unicorn. Today’s car hipsters would probably retroactively label this a shooting brake, but it was just a simple two-door wagon back then. In Japan, its RHD siblings would have been an even more utilitarian delivery van-spec. We’re glad the body modifications have been kept to a minimum. 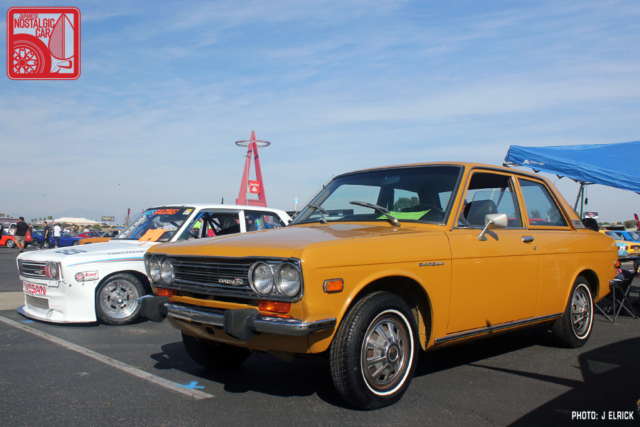 Julio Matal’s 1973 Datsun 510 is said to be a completely original unmolested example. With its original L16, 4-speed manual, and seemingly de rigueur butterscotch paint, it’s a model example of a 510. Perhaps what really strikes us about this car, other than its originality, is that it was parked next to an IMSA-flared 510 race car, showing just how insanely wide the 510 spectrum was. 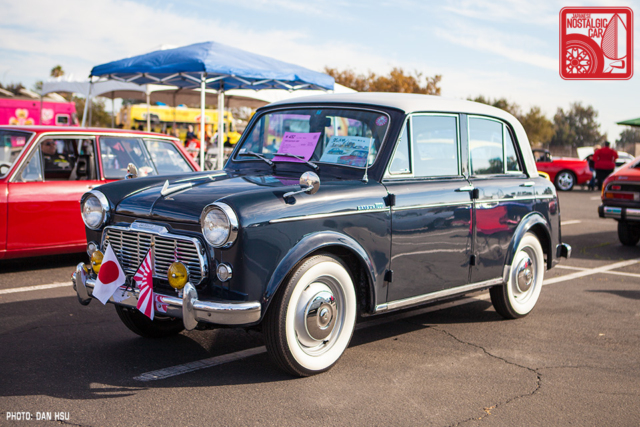 Pedro Medina’s 1958 Datsun 1000 won’t win any speed contests but the imported 211-chassis sedan is a significant piece of Japan’s motoring history. It was one of the earliest sales successes for post-war Nissan. You can draw a direct lineage from this car to the 510 and subsequent Bluebirds, and while there is a dedicated club of preservationists for these very old Datsuns in Japan, they’re impossible to see on this side of the Pacific. Now, thanks to Mr. Medina, we can see at least one. 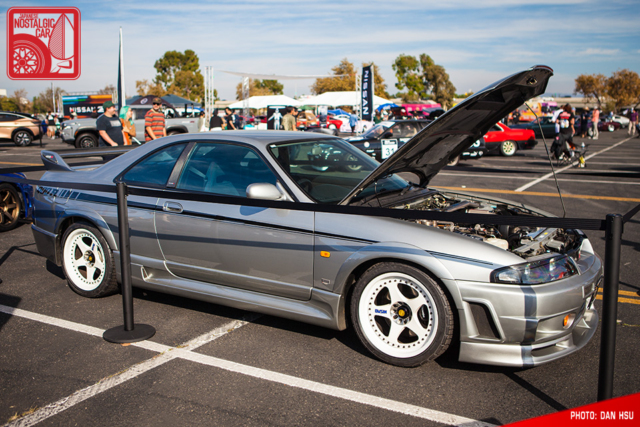 On the completely opposite end of the spectrum is the NISMO 400R. One of 44 produced, it’s essentially an R33 Skyline GT-R stuffed with all the technology of Nissan’s Le Mans race cars that NISMO could cram onto the chassis. Its twin-turbo straight-six was modified so much that it wasn’t given the RB26 designation, but the Speed Racer-esque RB-X instead. It boasted carbon fiber, 3-piece wheels, and forged internals — all supercar-level stuff back in the mid-90s.

Nissan was still handcuffed to the Gentleman’s Agreement keeping factory horsepower at a nominal 276 horsepower, but NISMO has no such restriction. The 400R, like its namesake, delivered 400. It’s the ultimate R33, and quite possibly on of the top three GT-Rs of all time. 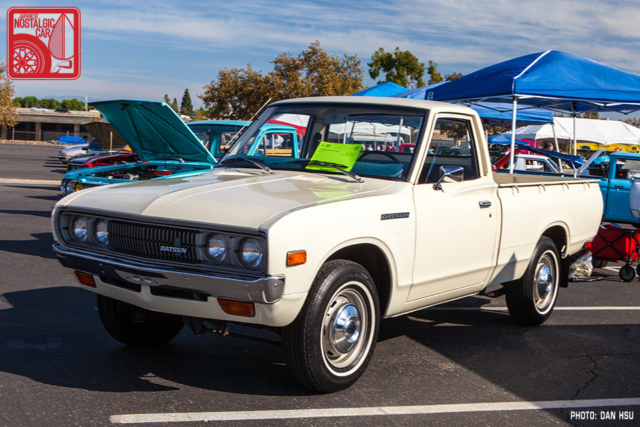 We were also impressed with Cristian Garcia’s 1978 Datsun 620. There’s not much that can be said about the pickup, except that its clean condition is incredibly rare for a Datsun pickup of this era.

One last Nissan before we move on, but definitely not least. Jared Perry’s 1976 Datsun 280Z made us feel like we were back in Japan. It has all the elements of a kaido racer Z, from G-nose to ducktail. The re-barreled Advan A3A wheels are insane, too. A build like this would only be possible from a dedicated student Japanese car culture, but unlike many of America’s bosozoku-inspired builds, it is at the same time extreme and restrained. Also, we respect the fact that Jared used a 280Z rather than a 240Z as his canvas.

Bryan Ramirez’s 1980 Mazda RX-7 gives us the same kaido racer goosebumps. Like RX-7 based kaido racers in Japan, many of its elements were taken from endurance racers overseas. In this case, the aero was in part inspired by the SA22C’s astounding debut GTU win at the 24 Hours of Daytona in 1979. Then, kaido racers added their own flair, like the Pantera hatch and louvered hood. The wheels, SSR MkIIIs, are a clever nod to the Daytona car as well.

You can’t get farther from a race-inspired RX-7 than a Mazda T2000. These two-ton, three-wheeled pickups played a pivotal role in Japanese agriculture in the 1960s. Seeing one in person is already an occasion. To see one restored with the loving care typically reserved for a classic V12 Ferrari is truly something to behold.

Bo Gaut’s Mazda Miata impressed us for two very simple reasons. First, he came all the way from Oregon. Second, it’s festooned with nearly every rare Mazdaspeed part and accessory made for the NA MX-5. Bo says that he began acquiring parts years ago when they were still relatively affordable. Today, it would be impossible to build this car without mortgaging your house. 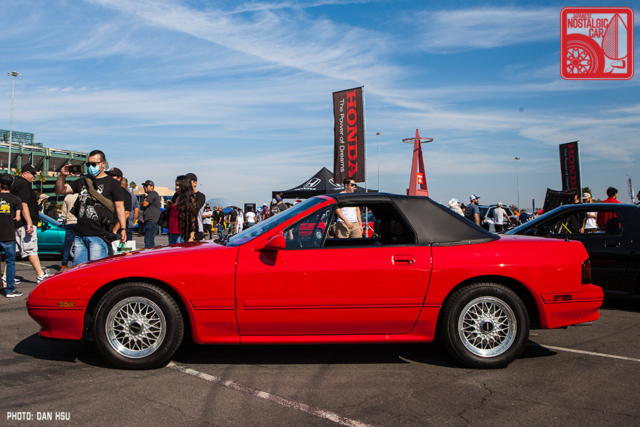 This Mazda RX-7 convertible blinded us with its resplendent paint job. Turns out, it’s the original factory red, still shiny and dazzling as the day it left Hiroshima. That’s because this car had, if we remember correctly, less than 6,000 miles on the odometer. We’re glad the days of people junking FCs to pull their 13Bs are over, and that at least some survived that particular genocide.

A tale of two sedans. Sandy Edelstein’s 1988 Mazda 929 is an astoundingly well-preserved example of the breed. Named Mary Catharine after its first and only owner before Sandy acquired it, the flagship four-door has only 43,000 miles on the odometer. It also has every option available at the time, from CD player to digi-dash to swing-vent climate control. The original Mary Catharine, now 99, apparently donated the car to charity this year, where Sandy found and rescued it.

We also liked the sole Toyota Century at this year’s JCCS. If we were to buy one, it would have to be black, but much respect to those who dare drive one in blue. That’s it. We liked it for no other reason than it being a not-black Toyota Century.

A tale of two Supras. We liked the work put into both of these A60 Supras. Like yin and yang, Roger Reyes’ white 1985 is the meticulously restored Dr. Jekyll, while David Salazar’s black 1984 is the modified Mr. Hyde. We are once again drawn to restrained customization with an eye towards bosozoku or shakotan style. One will be accepted a concours events, one won’t, but we love them just the same. 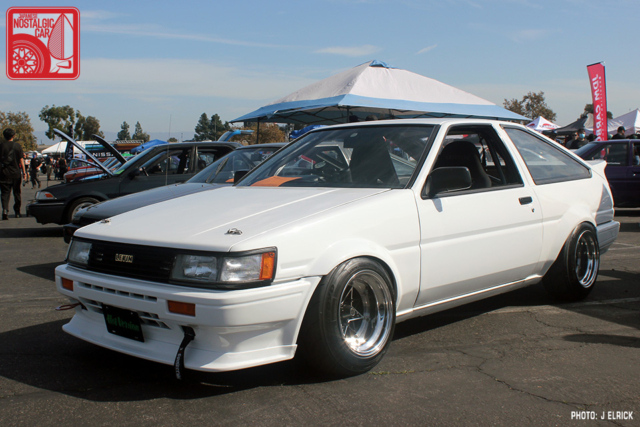 Similarly, this AE86 is never going to be allowed within a 10 miles of Pebble Beach, but this Corolla Levin is the prototypical example of a drift-spec Hachiroku. Even before you see that it’s RHD you can envision this white comet battling it out on the touge roads of Tochigi.

There were a lot of great kei cars at JCCS this year, but our favorite was Izumi Makino’s 1971 Honda Vamos. It stands as one of the most bizarre cars Honda ever built, but the mid-mounted, air-cooled, overhead-cam twin looks like it would be a blast to drive around California’s many beach towns. We’ve only seen a handful of these in the States, and they brighten our day every time.

The show this year was flooded with EA Civics. The two above were our favorites, and it thrills us that they’re getting a lot of love these days. We apologize for not getting the name of the owner of the top car, which gives a nod to the Kanjo racers of Osaka without going for the full-hockey mask gutting.

Marc Monticello’s 1986 Si won the JC Speed class, which covers all 80s and 90s cars at JCCS. It’s a tough field, but Marc won the day for his plethora of period correct aftermarket parts. It could practically be a Mugen catalog car, with its body kit, seats, steering wheel, shift knob, pedals, exhaust, and CF48 wheels (complete with aero discs). On top of that, Marc added other rare Japanese parts like EC Works mirrors and some ultra-rare Honda window visors commemorating the company’s success in Formula 1. 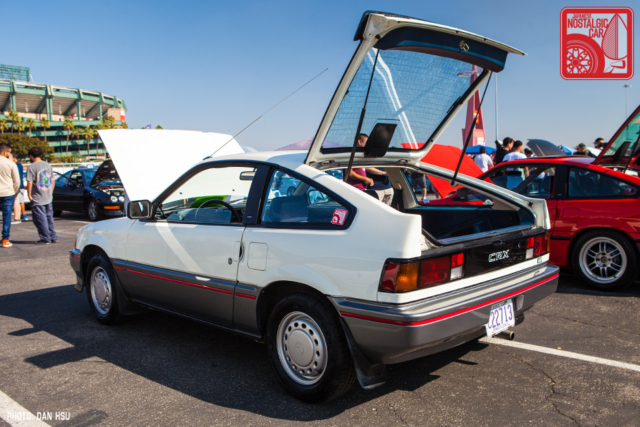 JCCS was teeming with CRXes this year as well, almost too many superb examples to count. We liked Dani Lemus’ blue 77,000-mile 1989 DX because it’s such an uncommon trim level. Preserving a CRX Si we can understand; who buys the economy-spec version and puts less than 2,500 miles a year on it?

The only thing more unlikely is preserving an ultra-fuel saver CRX HF. But that’s exactly what Ken Weidner did with his white 1986 model. Not only that, but he drove it all the way from Pennsylvania (and back) to attend JCCS. There wasn’t a Farthest Traveled award this year, but if there was Ken would’ve definitely won it.

Robert Garcia’s 1989 Mitsubishi Galant VR-4 caught our eye. We can’t say if it’s a genuine Ralliart car, but it at least wears the livery and OZ Racing wheels of one of Ari Vatanen and Bruno Berglund’s many Lombard RAC cars. The roll cage and seats don’t quite match up, but even if it’s a replica we admire the fact someone is keeping the memory of Mitsubishi’s rally heritage alive.

Gullwing doors are exactly the type of useless modification that we typically hate. Back in the Fast & Furious heyday strangely hinged doors were an instant giveaway that you were more about show than go. Dante Benson’s 1988 Mitsubishi Starion gets a pass, however, as it is more than likely an homage to Gorilla: Metropolitan Police Squad 8.

Represeting Subaru was Nagisa Kaneko’s 1984 Subaru GL Turbo Wagon. The original survivor is probably one of Subaru’s rarest US-market models. Not only was it one of the earliest examples of forced induction boxers, the turbocharged 1.8-liter EA was denoted by gold “Turbo” badging on the side mirrors. Black and gold trim throughout the car was another giveaway, and these days those bits are unobtainium. Nagisa took the Best USDM class for this car, a win that was well-deserved. 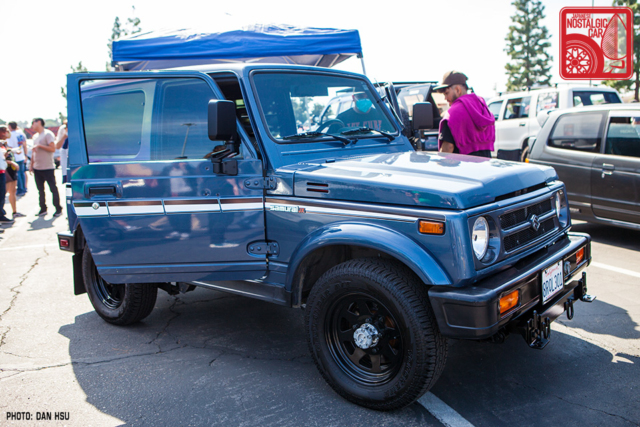 Finally, taking the spot for our favorite Suzuki (and favorite 4×4) was Jamie Montoya’s 1986 Samurai. Tin top Samurais are rare, and so are well-kept Samurais in general. We love the blue paint, the 80s decal stripes, and the devotion to restoring a rare vehicle. 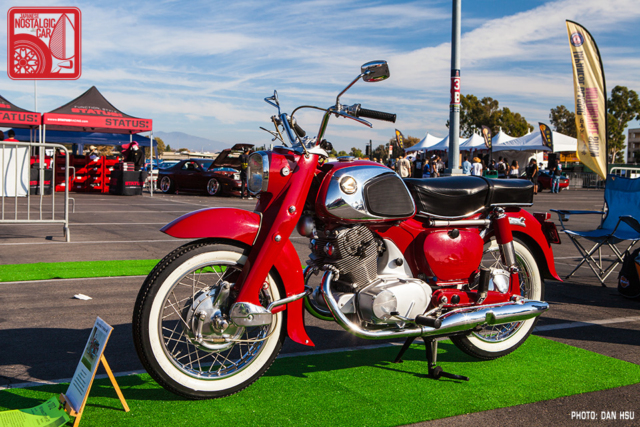 And last but not least, we were knocked out by Mike Freitas’ 1960 Honda C77 Dream 305. Only about 300 of these bikes were made in 1960, and burgundy is a very rare paint color that hearkens back to the 1949 Dream Type D, Honda’s first proper motorcycle. Mike says that this was a ground-up restoration and that the bike has been in his family since 1962. A beautiful tribute and a beautiful restoration, that’s what JCCS is all about.