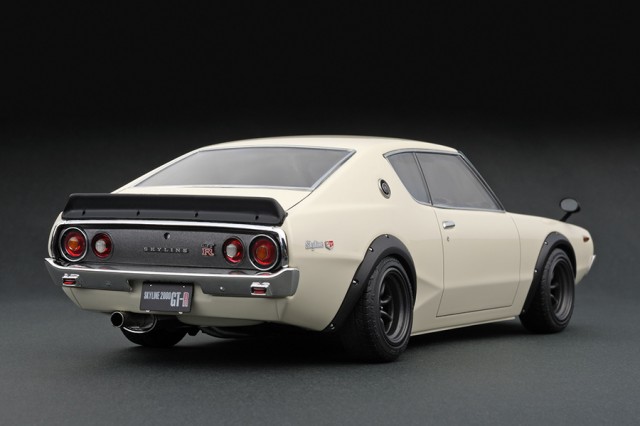 What you are looking at here is not a kenmeri Skyline. It’s an insanely detailed scale model of a kenmeri Skyline made by a new outfit out of Shizuoka called Ignition Models. They make a variety of 1:43, 1:18 and 1:12 scale cars, but the most interesting one to us is this stunning 1:18 Skyline GT-R, and it has just landed stateside.

Ignition opened for business in December, 2013, born from the ashes of r/c maker HPI’s diecast line which shuttered that same year. Ignition took the “DNA of HPI” and brought several models that would have otherwise been discontinued into existence, then expanded the lineup to a variety of cars categorized on their website as Nostalgic, Rally, Touring and Group C. 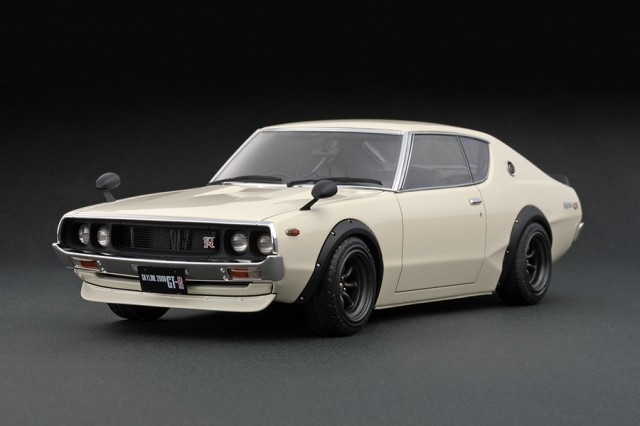 The kenmeri GT-R is their first foray into a 1:18 scale nostalgic, and it is a beaut. As you might recall, a couple of years ago a Japanese modeler created several mind-meltingly cool customs of high-end JNCs. Ignition models come pre-modded in proper Japanese style, and is so realistic they even acquired a licensing agreement with RS-Watanabe to use their wheel designs.

What’s most amazing about these cars is that the gaps between scale chrome trim and body are impossibly thin, airtight even. That’s because these 1:18 scale cars are not diecast, but resin. Resin has been around, but is becoming increasingly popular on high-end models for many reasons. We’ll let Patrick Strong of Carriage House Models, the only US retailer we know of that carries these models, describe why resin is superior to metal.

The main advantage of resin is one of economics. Resin molds cost only a few thousand dollars to tool (as opposed to diecast metal molds, which for a 1:18-scale car can cost around $200,000). The lower production cost of resin models means that a much wider variety of subjects can be created; manufacturers can make more oddball cars with narrow appeal because they won’t have to sell as many of them to recover their production costs.

From the standpoint of the models themselves, the major plus for resin cars is that you’re able to get exterior detail that’s much more crisp and authentic than on most metal models. The tradeoff, of course, is that with a single-piece, injection-molded plastic body, you don’t get opening parts, but then, you don’t have to worry about trying to accurately scale your shutlines either. On the kenmeri, for example, Ignition made a depression in the body to simulate the door seams, which they then shaded grey. The effect is excellent, and for a collector who prefers to display his/her cars closed, sealed bodies are not an issue.

In addition to the kenmeri, Ignition also offers the R34 Skyline GT-R and R35 GT-R in 1:18 scale. If the 1:43 nostalgic car lineup is a predictor of future models, the S30 Fairlady Z and C10 hakosuka Skyline seem likely to come next. Ignition 1:18 models are usually limited to 300 pieces, so get yours while you can. They retail for $210 including shipping at Carriage House Models.