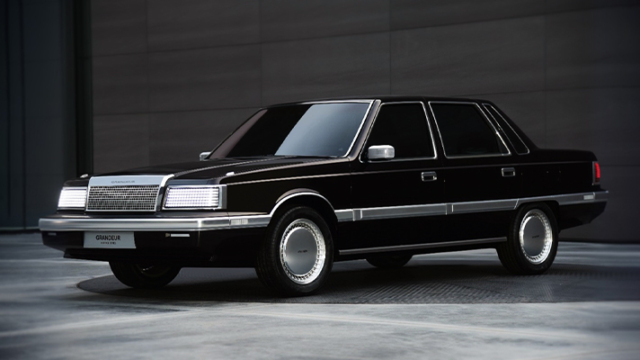 Hyundai has just unveiled one of the coolest concept cars we’ve seen in a while, an electric sedan based on its 1986 Grandeur flagship. Don’t check your calendar, it’s not April 1; nor have you stumbled upon Korean Nostalgic Car, a site that doesn’t exist. We’re covering it because not only was the Grandeur based on the second-generation Mitsubishi Debonair, Hyundai played a pivotal role in the car existing in the first place. 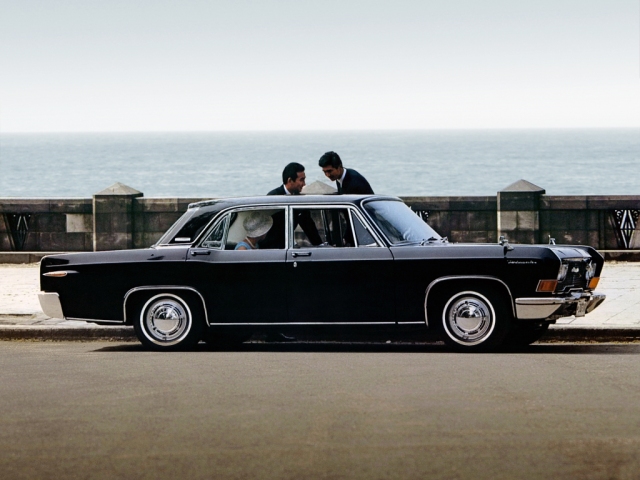 For much of Hyundai’s early life, its cars relied on Mitsubishi-supplied engines, if not entire cars. Mitsubishi had planned to kill off the Debonair in the mid-80s, as the first generation, introduced in 1964, was going on more than 20 years. It wasn’t customary for VIP sedans like the Toyota Century or Nissan President to have frequent updates, but even so, by then the Debonair was looking pretty outdated compared to its competition. 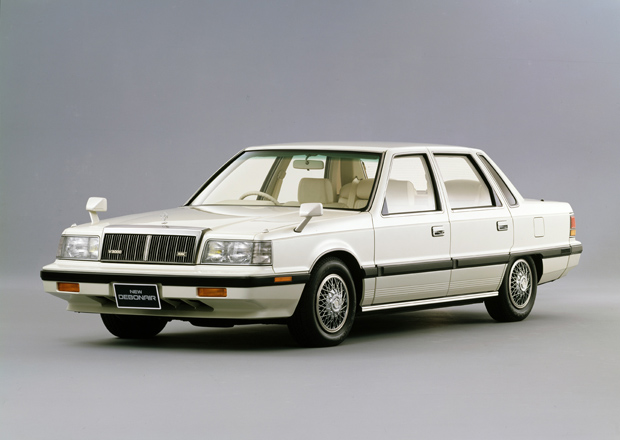 Mitsubishi wasn’t looking to spend the big bucks required to develop a new top-tier executive saloon, but as with so much of Asian automotive history, the Olympics became a turning point. When the IOC selected Seoul as the site of the 1988 Summer Games, Hyundai knew they needed a spacious and modern limousine in which to shuttle dignitaries and VIPs around. Thanks to their existing partnership with Mitsubishi, Hyundai was able to convince the triple-diamond clan that they would pay for part of the development costs and buy enough knock-down kits to make a second-gen Debonair possible. 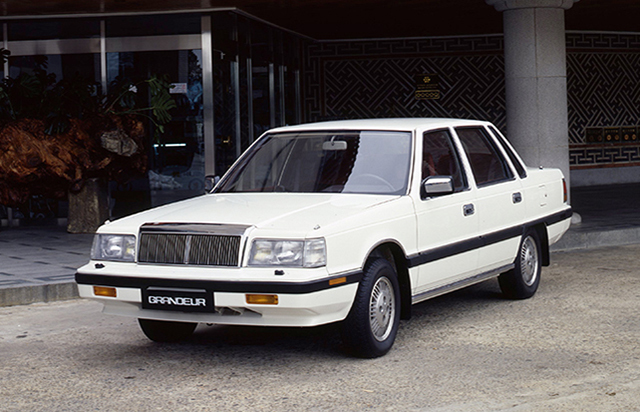 The S10 chassis Mitsubishi Debonair and Hyundai Grandeur both debuted in July 1986. That makes 2021 the 35th anniversary of the Grandeur, which Hyundai is celebrating with an electric restomod conversion of the original. The project took only eight months to complete, as it isn’t exactly a new build from the ground up. Instead, the concept uses original Grandeur sheetmetal with an electric motor to replace its 121-horse, 2.4-liter four. 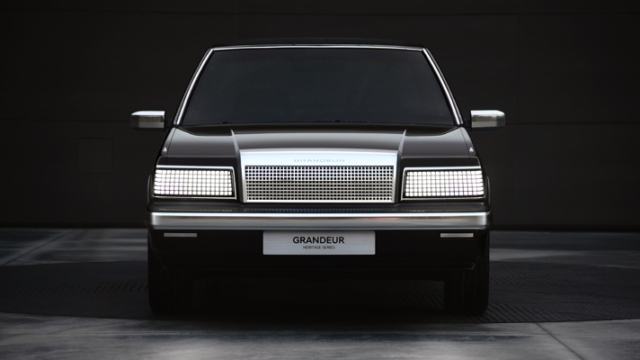 Hyundai didn’t specify the EV drivetrain, as it’s not really the point. The focus of the concept is design, and on that point the Grandeur is absolutely fantastic. Starting from the front, the Grandeur’s lighting has been completely modernized. The headlights are now an array of LEDs, a motif mirrored in its new grille. A few years ago I interviewed ex-Bentley designers Luc Donckerwolke and Sangyup Lee, both ex-Bentley men, and they said LEDs were going to be a big part of Hyundai design going forward. South Korea, they reasoned, is a pioneer in LED technology and they wanted to incorporate that point of national pride into their cars as a design element. 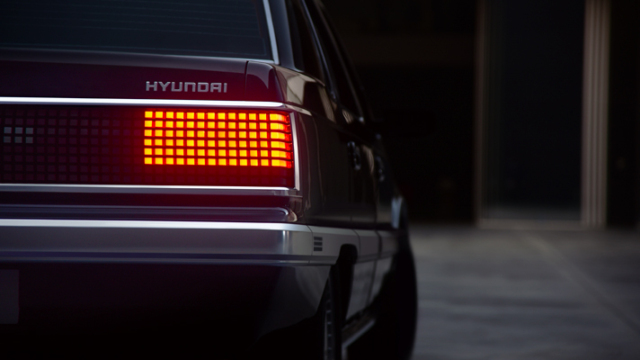 They predicted that LED progress would soon allow very thin diodes to emit enough lumens to function as automotive lighting. That’s proven true, and clever lighting designs can now be found across the Hyundai family. On the Grandeur, the grid LED pattern is repeated on the taillights where it evokes, perhaps unintentionally, that of the fifth-generation Galant Sigma. 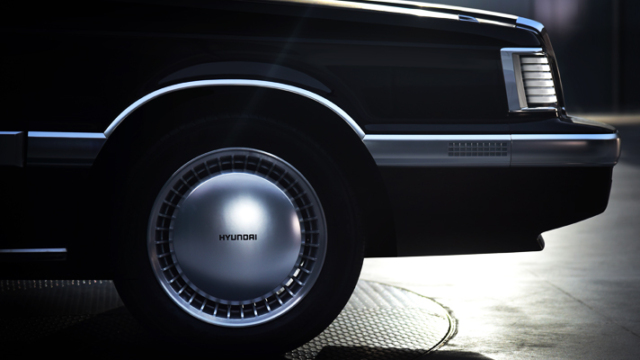 The grid arrangement even extends to the side marker lights, which are embedded in side molding that is now a burnished silver color. The wheels seem to match that hue, and are a completely new one-piece alloy design, even though they resemble a 1980s hubcap. 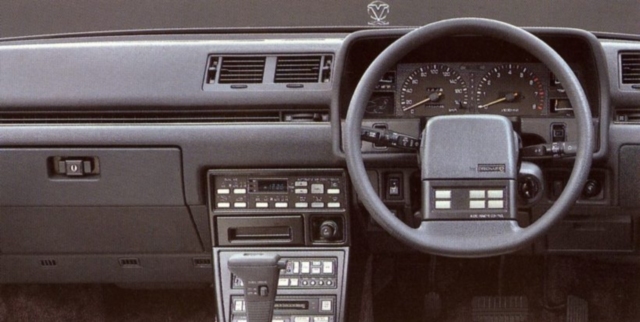 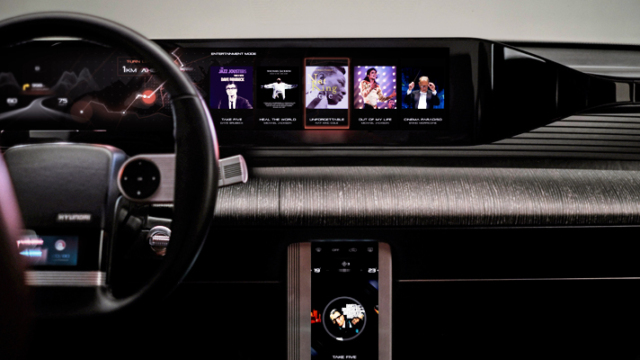 The interior, on the other hand, has undergone far more changes. There’s very little that’s recognizable from the original Grandeur, yet its design somehow still fits with the overall theme of the car. One of the few elements that remain is a Mitsubishi signature mono-spoke steering wheel, though in this case an auxiliary tab with embedded controls seems to have been added, at least on the right side. Additionally, the bottom of the spoke encloses some kind of touchscreen where the original had a series of buttons. 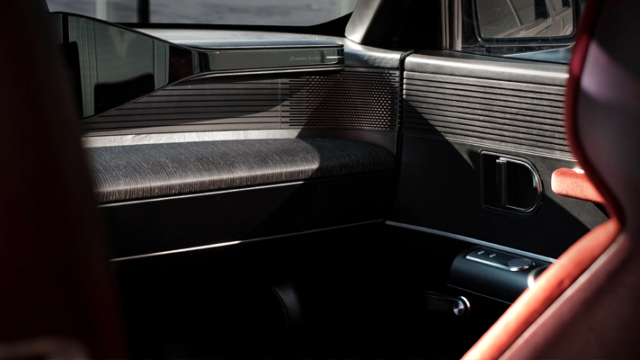 Speaking of screens, the dash consists of an obligatory massive monitor to replace traditional gauges. Here, the floating display spans the width of the dash. Below it is a tray that serves as a storage level, its wide lid opening like a piano fallboard. You’ll notice a speakers in the corner as well, just one of 18 that form an ultra-modern 4-way sound system with two woofer ranges. 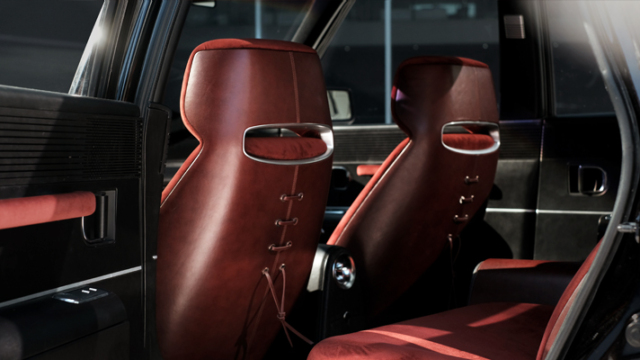 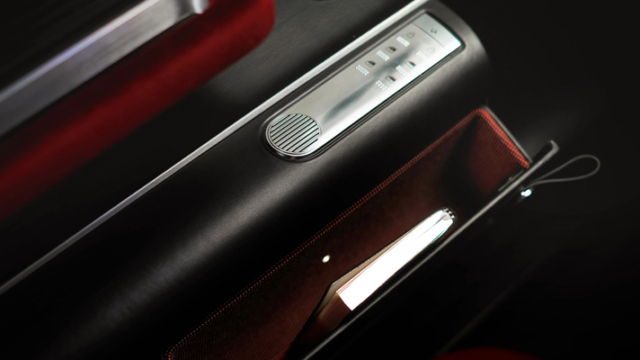 The door panels have been completely redesigned, but they still feels like something from the 1980s. A dark leather surface mixed with the chrome of a hi-fi stereo system, and a side pocket that opens like a handbag seems decidedly old school. 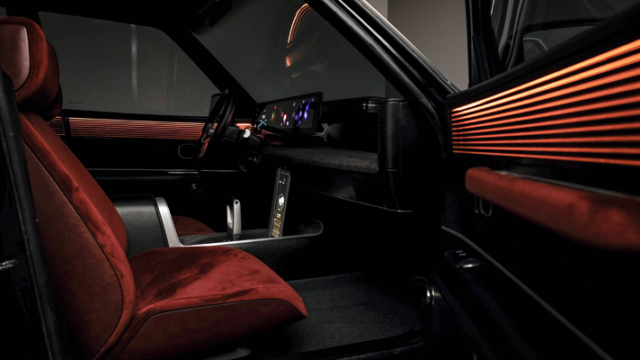 However, the interior’s pièce de résistance is, once again, its lighting. Beams of ambient light embedded into slats along the doors conjure images of 80s laser matrix graphics or some kind of neon Patrick Nagel art. 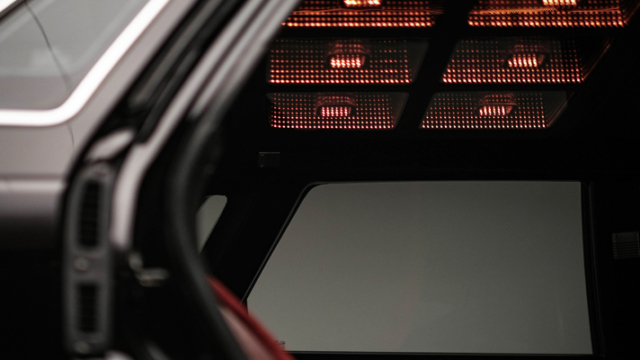 These streak along both sets of doors, but the back is where the lighting gets really wild. Embedded above the rear bench are more grids of light, reflected through parallel planes of glass (also known as infinity mirrors). It’s an old school trick, like something you’d find in a swanky hotel elevator. And it fits perfectly with the notion of an 80s VIP coach, even though no actual car from the era ever had such a feature. 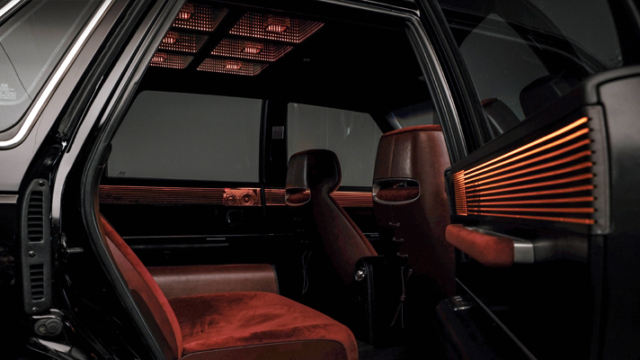 We imagine that riding in the back would feel like lounging in the cocktail bar at the New Otani, or perhaps the Manhattan Playboy Club. It’s practically begging you to chain smoke a pack of Mild Sevens, knock back a Suntory highball or two, and play some Tomoko Aran. 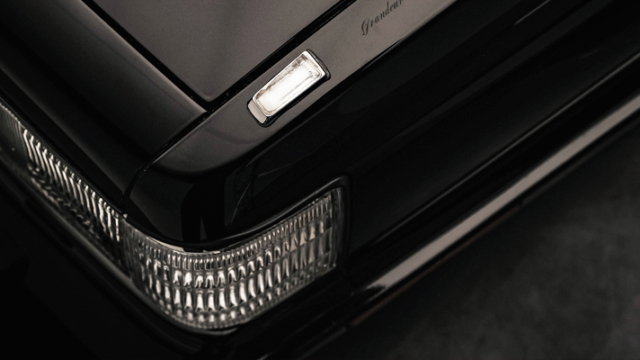 The Grandeur is an extraordinary work of automotive art. It’s the first car we’ve seen that modernizes a Tears for Fears-era design while keeping the all-important feel of the car planted firmly in the 1980s — and does so without the use of any magenta or turquoise. It’s proof that an EV design doesn’t have to be an iPad on wheels, that it can be fun and interesting. 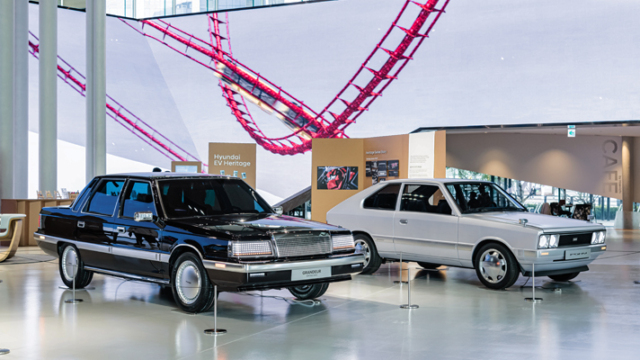 The Grandeur is in fact the second in the Heritage Series of re-imagined cars from Hyundai’s history. The first, released in April, was a similarly updated version of the 1975 Pony, a Mitsubishi-powered hatchback designed by ItalDesign Giugiaro. The next car to receive this treatment, Hyundai says, will be a Galloper, a rebadged variant of the Mitsubishi Pajero. We can hardly wait. 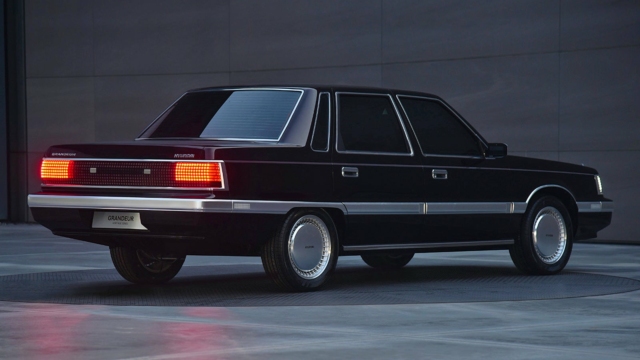 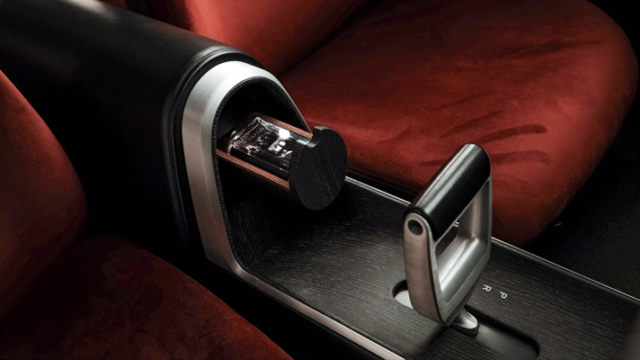 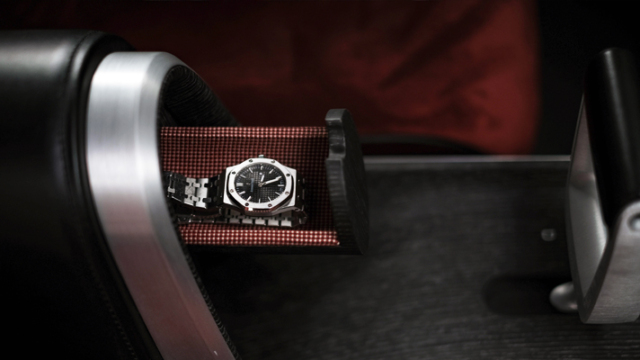 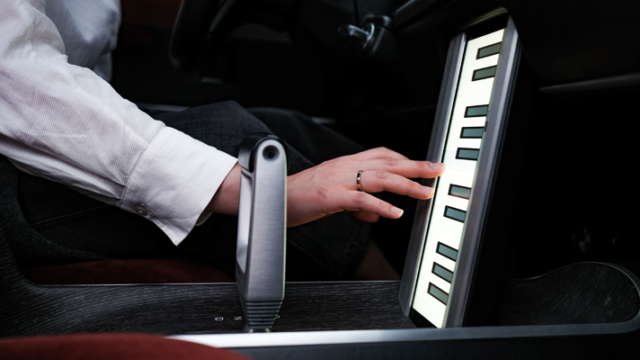 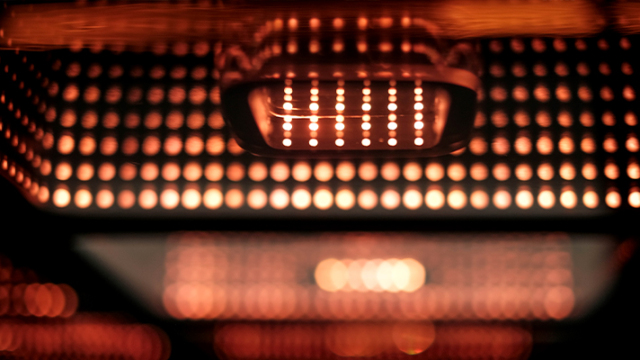 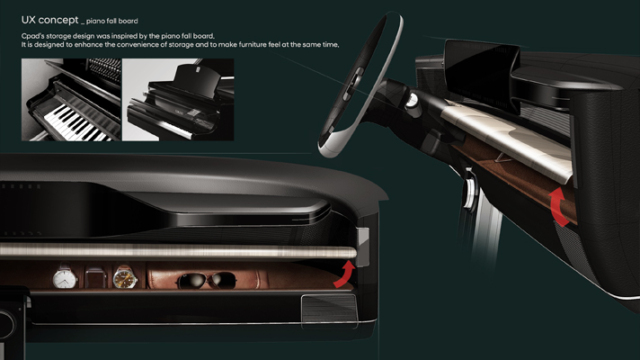 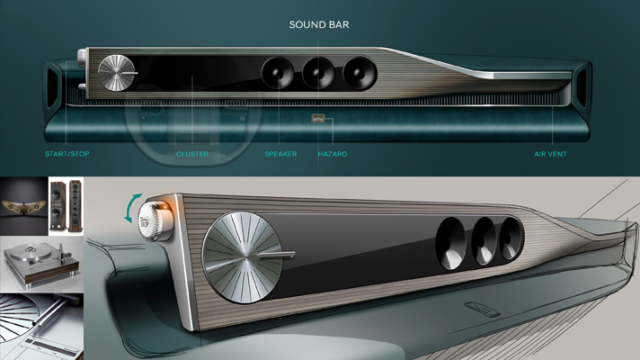 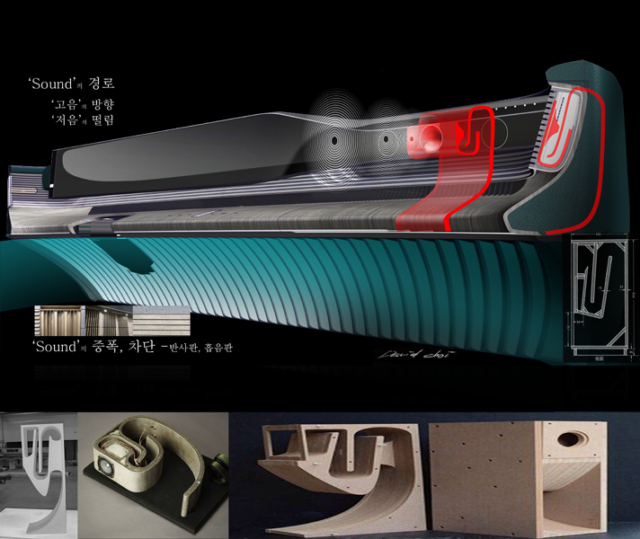 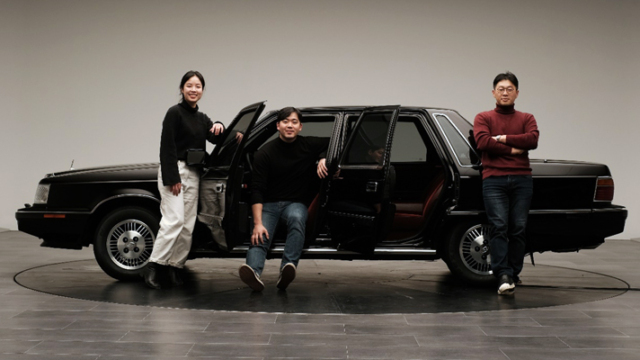