Fuji, 1971. The mighty Hakosuka was slated to reach its record 50th win in Japanese touring car racing, only to have that taken away by a plucky upstart from Hiroshima known as the Mazda Savanna (aka. RX-3). Years later, its spirit would be succeeded by the sleek RX-7, the first two generations of which also bore the Savanna name in Japan. Why did Mazda choose that name for such iconic cars? 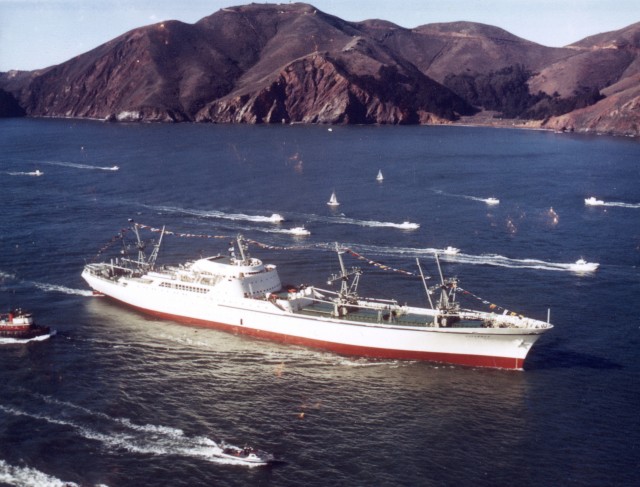 The namesake of these beloved rotaries is the NS Savannah, the first nuclear-powered merchant ship in the world. Commissioned in 1955, it was part of President Eisenhower’s Atoms for Peace initiative to demonstrate peaceful applications of nuclear power. It was a topic very dear to the people of Hiroshima, where Mazda’s headquarters is located.

Savannah’s design was intentionally futuristic at the time, with sleek lines that evoked a luxury yacht rather than a typical passenger liner or cargo ship. This was further aided by a “long hood short deck” look, a proportion that should be most familiar to fans of the RX-7. With the superstructure — the “building” that stands above the main deck — located far aft it was actually a case of form following function, done to provide clear overhead access to the nuclear reactor, located at the center of the ship.

The Savannah was a joint project by the US Maritime Administration, the Atomic Energy Commission, and the Department of Commerce. Construction began in 1958 in Camden, New Jersey and she was launched fourteen months later. However, installation of the nuclear reactor would take another two and a half years, with the ship fully operational in 1962. 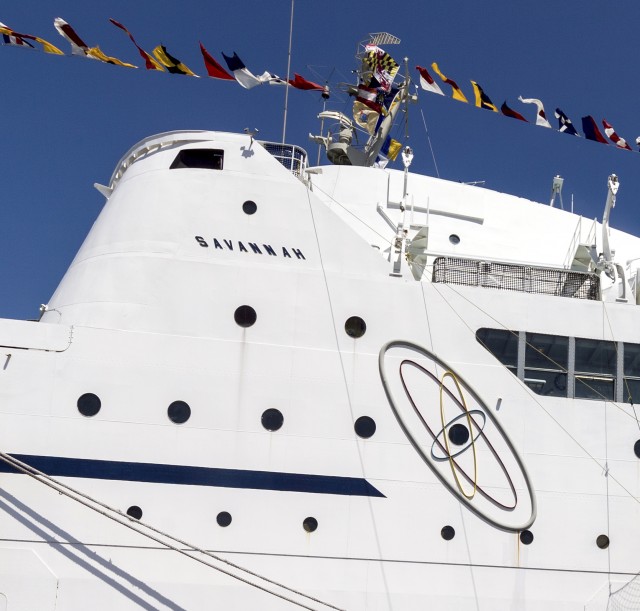 The Savannah had three full decks and seven cargo holds. The passenger accommodations were sophisticated, not unlike what you might find on the original Starship Enterprise, a contemporary of its time. Niceties included an elliptical lounge, glass walls overlooking the swimming pool and promenade, tables with illuminated glass tops, a metal and glass sculpture of the periodic table, and another wall sculpture titled Fission. Various stylized atom motifs appear throughout the ship, such as light fixtures as well as large graphics on the side of the ship.

In terms of powertrain, the Savannah had a reactor built for safety and reliability powering a steam turbine engine for propulsion. The turbine also had an emergency electric motor driven by a steam or a diesel generator. Power output was at 22,000hp, giving a maximum speed of 24 knots (28 mph). 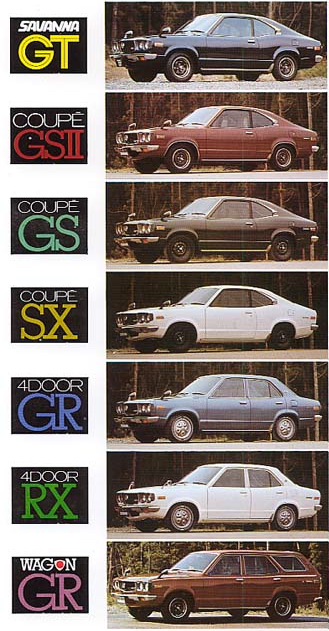 The Savannah was in active service until the end of 1971, carrying passengers and cargo with an excellent safety record. As an ambassador for the Atoms for Peace initiative, she was visited by 1.4 million people in 45 ports abroad and 32 domestic. The lack of diesel exhaust meant that her paint was never smudged by soot. Nowadays, she resides in Baltimore, Maryland as a National Historic Landmark.

The motivations behind the Atoms for Peace initiative may be complex, like many things in our society, but a visible and public aspect of it was to cast a hopeful and optimistic outlook of a world with nuclear power. The NS Savannah symbolized the application of that technology for betterment instead of warfare. Seventy years ago today Hiroshima, Mazda’s hometown, saw a devastating application of the technology. Mazda’s naming of its flagship rotary-powered sports coupe after the NS Savannah was a recognition of its history and an affirmation of resilience and optimism.

permalink.
This post is filed under: mazda and
tagged: mazda, rx-3, rx-7, savanna.