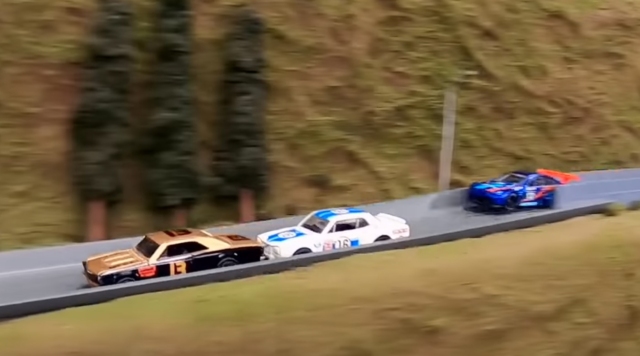 When we started racing with YouTube’s premiere diecast motorsports league, we had no idea it would come to this. My wife Carrie took the JNC team trophy, after ruthlessly decimating every writer on the staff and also our own two-year-old son. Her Hot Wheels Nissan Skyline gave no mercy to our Toyotas, Mazdas, or Datsuns. Now, her JNC tournament-winning Hakosuka is taking on the winners of 3DBotMaker‘s other tournaments, going up against everything from a BMW M3 to Vin Diesel’s blown 1970 Dodge Charger from the Fast & Furious movies.

We’re going to recommend that you watch the videos before reading further so as to avoid spoilers. Anyway, I think where most of the JNC staff went wrong is that back when we started this 3DBotMaker racing thing, we picked cars we liked in real life. But that has absolutely nothing to do with how quickly these toy cars go down a track.

Carrie didn’t care whether she was in a 2000GT or SA22C, but she said there was something about the Hako that made it look fast. The fact that it was a Japan Historics premium model meant that it had a metal base. In a race fueled by gravity, that’s an advantage. So is a long wheelbase to help keep it pointed straight over bumps and curves. She works in the sports industry, so she probably had an innate sense for these things.

Round 2 pitted the final four, to top competitors out of 48 cars that eliminated the competition all year, in a grueling extended 8-race finale. Here, she would go up against her most formidable opponent, a 1970 Dodge Charger based on the one Vin Diesel drove from the original The Fast & The Furious movie. That Charger won a Muscle vs Tuner tournament earlier in the year, slaughtering an AE86, FD RX-7, EK9 Civic, and DR30 Skyline. The glory of JNC rested with Carrie and her Hako. 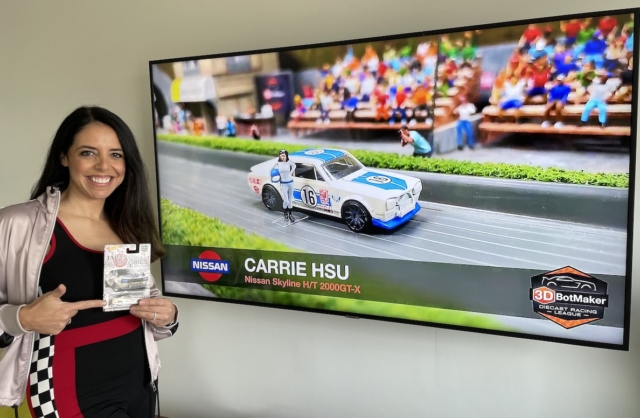 Channeling the spirit of Kunimitsu Takahashi, Carrie pulled it off! She was even immortalized in 3DBotMaker history with her own figurine, which I think bears a striking resemblance. This is a woman who won both a Cannes Lion and an Emmy for her work at her day job this year, but we all know this is the real prize. Congrats babe, and thanks for defending the JNC‘s honor in the cutthroat world of diecast racing.