This collection of 1,200 motorcycles proves it’s better to hoard bikes than cars 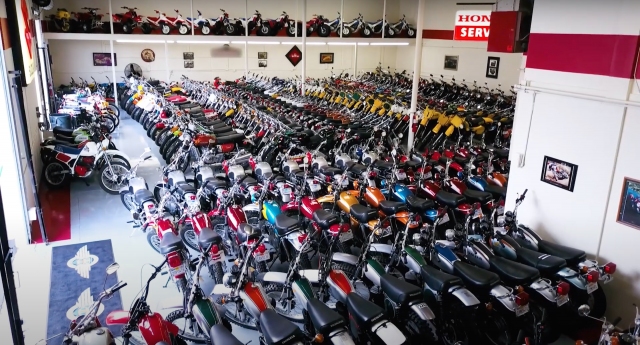 It would probably be inaccurate to call Brad Boyle’s warehouse of motorcycles a collection. It’s more of an obsession. Boyle owns 1,200 motorcycles, and estimates that 300 to 400 of them are Hondas. When you’re asked how many Hondas you have and the count can be off by 100, you might have too many.

Boyle is the latest collector to be featured in Honda’s Kokoro series, which highlights devoted collectors of the marque. Boyle began his relationship with two-wheelers racing motocross, and says he “always wanted to have a small collection of bikes.” Today, his collection is far from small.

Perplexingly, Boyle collects multiple, nearly identical examples of the same model. He has six CB750s, at least seven CT70s, four Fat Cats, and a row of Scramblers. It’s crazier than a room full of Monkeys, which Boyle also owns. The Number One Dime to his Scrooge McDuck vault of bikes is an SL90 that he personally owned years ago, parted with, found again, and restored.

What’s even more insane is that Boyle thinks he’s only among the top three Honda hoarders in the world, which means there are others like him. He says that he needs to start a Motorcyclists Anonymous group as a joke. Or is it?

This only proves that it’s better to collect motorcycles than cars. We’d be happy to have just one of each fantasy garage vehicle in our hypothetical collections, and even then the sheer space required would be impossible to manage. In fact, even an imaginary collection of 1200 vehicles seems unmanageable. We don’t know how Boyle does it, but hats off to him.

11 Responses to This collection of 1,200 motorcycles proves it’s better to hoard bikes than cars