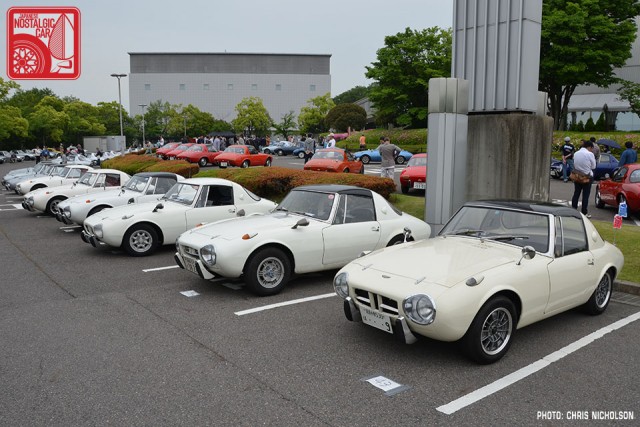 This year marks the 50th anniversary of Toyota’s first sports car, the 1965 Toyota Sports 800. Though small in size, the Yotahachi, as it became affectionately known, quickly developed a devoted fan base thanks to its ultra light-weight construction, aircraft-inspired styling, and unique removable “targa” roof panel that debuted two years before Porsche’s. To honor this unique automobile, Toyota sponsored two events on successive days, first at its home in Aichi Prefecture and then in the capital of Tokyo. 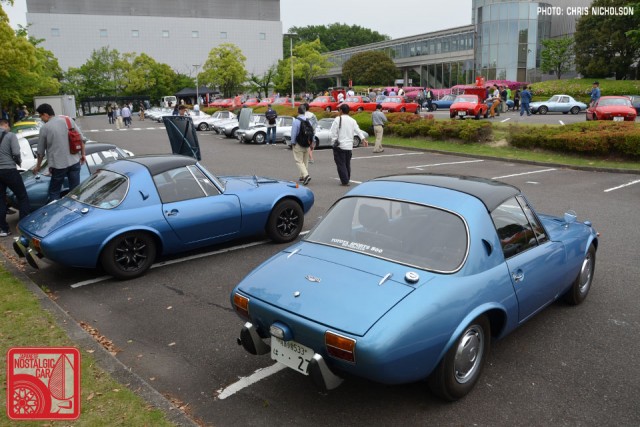 It’s funny how one random occurrence can have a snowballing impact, such as stumbling upon a Japanese comic book while waiting for your vinyl record collection to be appraised a Tennessee record store. The comic book in question was the now-classic You’re Under Arrest!, and one of the star cars of the series was the Toyota Sports 800, a car which has had a pronounced effect on my life since then. 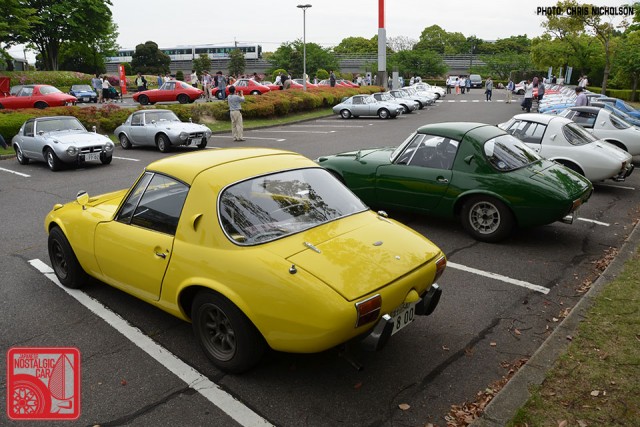 The latest result of that instance was timing my vacation (from a car museum that has a Sports 800) to coincide with the 50th anniversary celebrations of the Yotahachi. While events are taking place all over Japan this year, my specific target was a two-day event in central Japan in May, with one day at the Toyota Automobile Museum in Nagoya, and the next at Toyota’s MegaWEB in Tokyo. It promised to be a blowout. I had no idea what an understatement that would be. 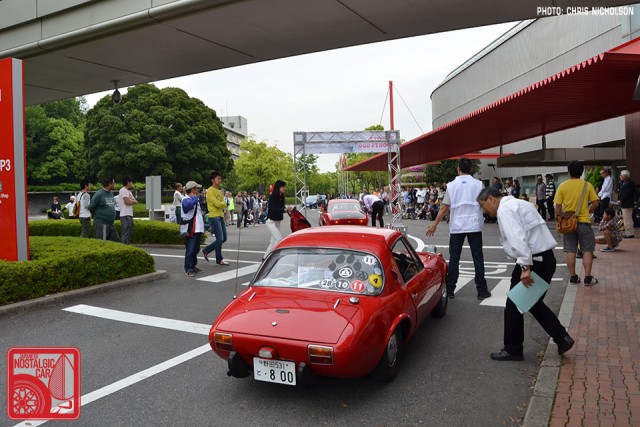 Arriving at Nagoya Station by Shinkansen, I took the Higashiyama Line to its last stop in Fujigaoka. Instead of hopping on another train or a bus, I decided to splurge a little and arrive at the Toyota Automobile Museum in a Toyota… Crown Comfort taxi. 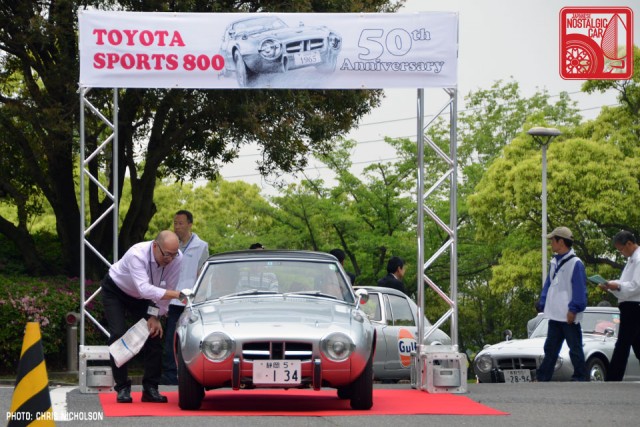 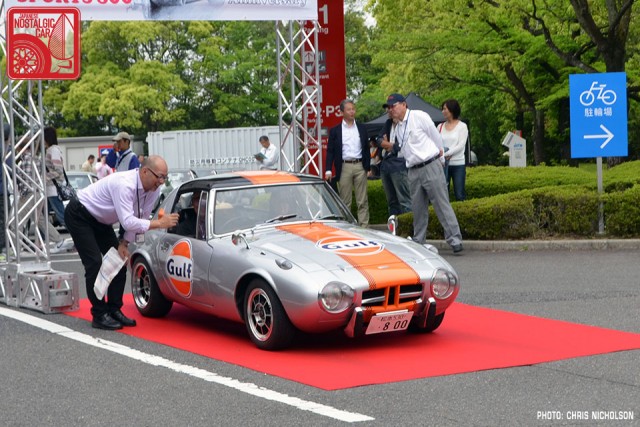 When I arrived, owners and their cars were being introduced to the crowd by the museum’s Takekuni Saito, head of the Nagoya event. Right away, I was introduced to Yasunari Sugiyama, the main coordinator for both days, and Watanabe-san, my ride to Tokyo that evening. The introduction consisted of shoving me into the passenger seat of his Yotahachi as it was rolling up to the interview spot. Yoroshiku onegaishimasu! A quick interview (in Japanese), a parade lap around the building, and back into the parking lot. After that, I put together my trusty Nikon and went to work. 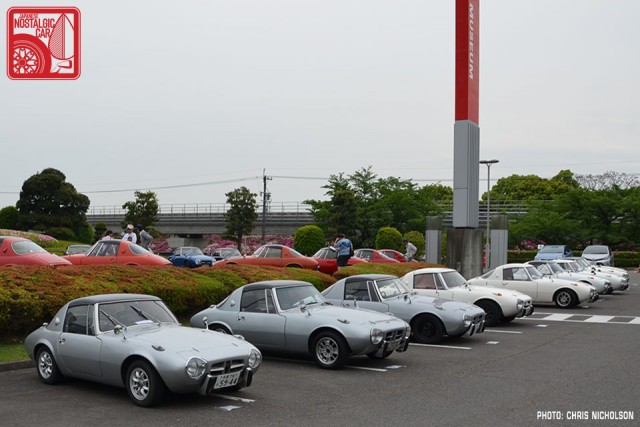 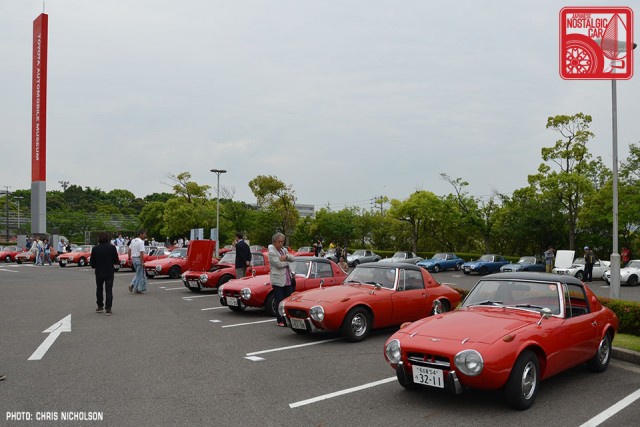 Two sections of the museum’s parking lot had been set aside for displaying Toyota’s first sports car. There were examples from each year of production, race cars, one-owner cars, restomods, and mythical cars I had only seen in grainy little scans of old photographs. It was heaven. 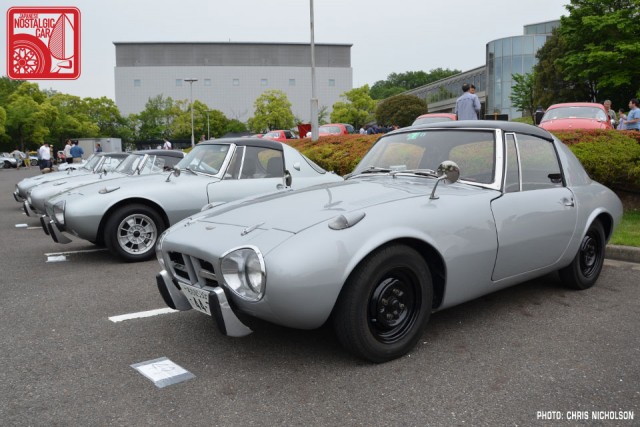 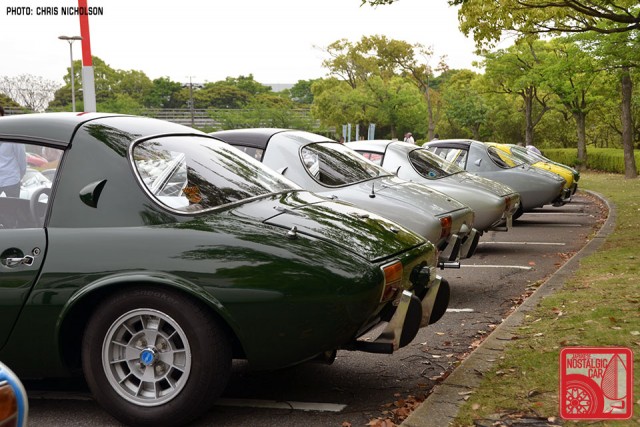 According to Sugiyama-san, the total number of owners’ cars at the TAM was 89. That does not include the 4 cars Toyota had on display from their own collection. When you consider that only 3,131 were ever built and maybe only 10 percent survive today, the attendance was especially impressive. 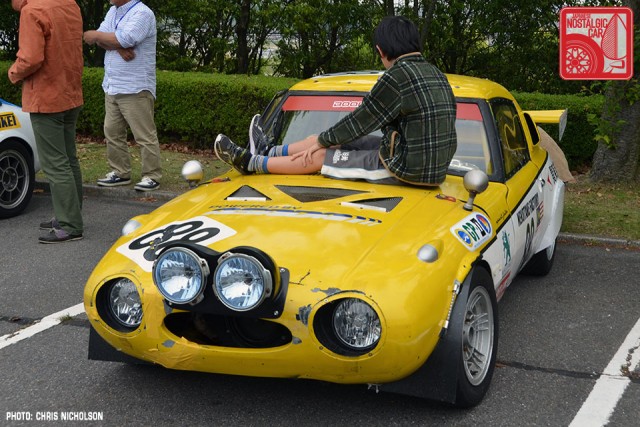 One car that caught my eye right away was this heavily-modified race car. Before that moment, I had only seen grainy little pictures of the car, deep in the corners of Japan’s internet. To see that it still existed was fantastic. I missed the opportunity to ask the owner about the car’s history, but have asked Sugiyama-san to put me in touch with him, so I can learn more about the car’s undoubtedly interesting past.

Many of the cars were personalized. Some in small ways, some in obvious ways. Some out of necessity due to the scarcity of parts, and some just because. This silver example wears tasteful custom wheels and a beautiful handmade, hand-painted rear package shelf. 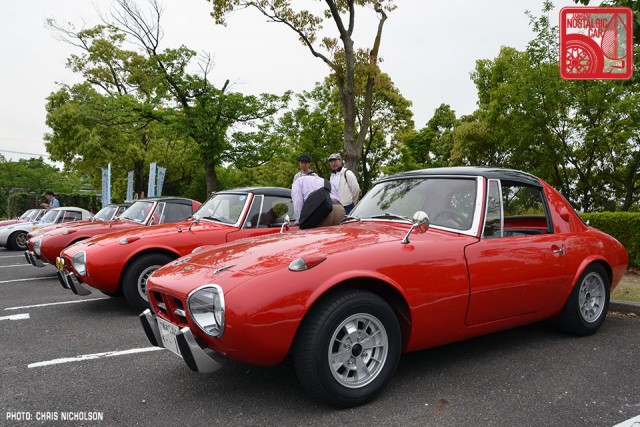 Only 10 percent of the total production was left-hand drive, mostly for the Okinawa market, but some were built for a test run in America back in 1967. Although the exact number was apparently not documented (or the records were lost), the popular estimate is 41 cars. However, after determining that the cars would not sell well in the US, Toyota left them with the dealerships instead of shipping them back to Japan. Some cars did make their way home over the years, and this is one of them. It was brought out by my friend, Dohi-san. Except for the wheels, it’s a twin to the car we have at work.

This vintage race car celebrated the 40th anniversary of the Sports 800 by attending the Goodwood Festival of Speed, which might make it the classiest Sports 800 out there. 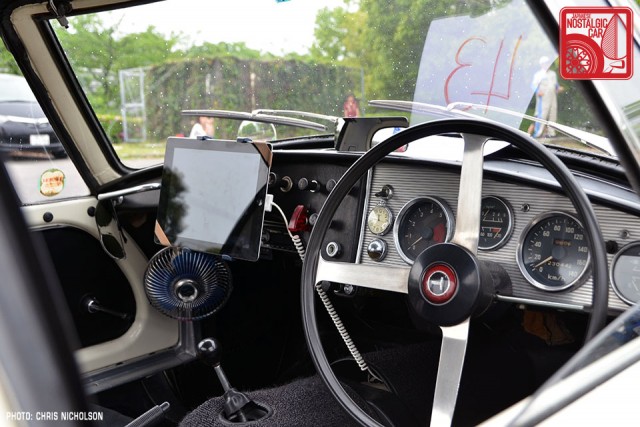 The occasional light drizzle wasn’t about to keep dedicated Yotahachi lovers from checking out a restomodded example of their favorite car.

The car in question was running modern wheels, headlights, and even air conditioning. The owner even rebuilt the original gas heater and is brave enough to actually use it. (I’m not that brave. During a mechanical rebuild of our car a couple of years ago, I blocked the fuel line to the gas heater in order to disable it.) 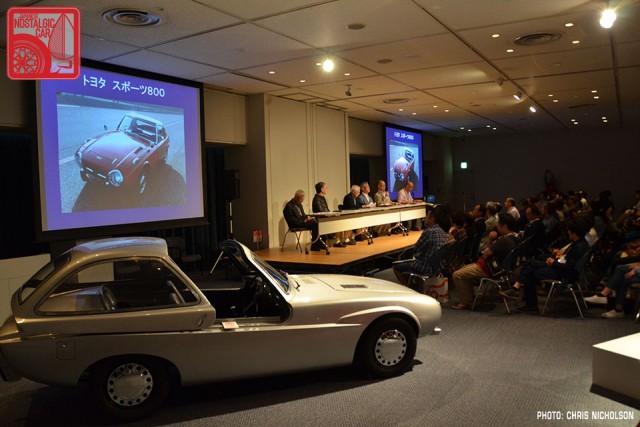 Inside the Annex at the Toyota Automobile Museum, Saito-san led a panel discussion with men who were responsible for the design and production of the Toyota’s first sports car. Unfortunately, the lead designer, Tatsuo Hasegawa, passed away in 2008. 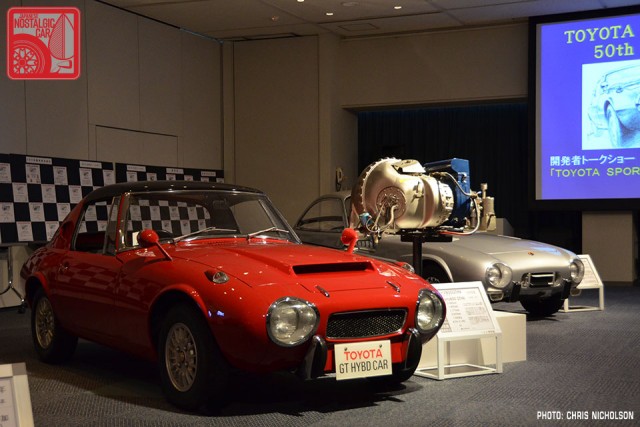 To the side of the packed house were three fine examples. A privately-owned 1965 model that was stock down to its bias-ply tires, the gas turbine hybrid from the 1979 Tokyo Motor Show, and a reproduction of the 1962 concept car from that year’s All Japan Motor Show. 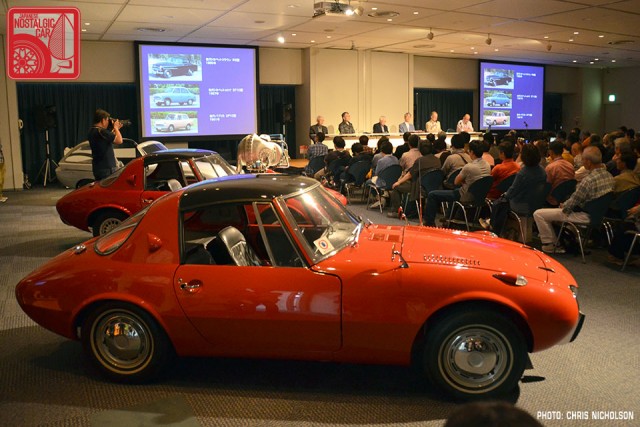 Since the discussion was completely in Japanese and beyond my N-level, I used the time to explore the museum and parking lots on my own. 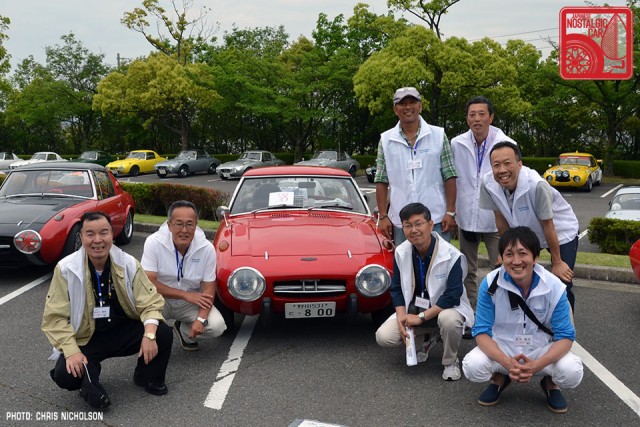 After the discussion panel and the handing out of gift bags, it was time to pack myself into Watanabe-san’s 1968 Yotahachi and head for Tokyo and the Oedo Onsen on Odaiba. But not before some of the museum staff volunteered to pose with the car the American guest would be riding in. And finding a passenger-less Yotahachi to carry my suitcase. 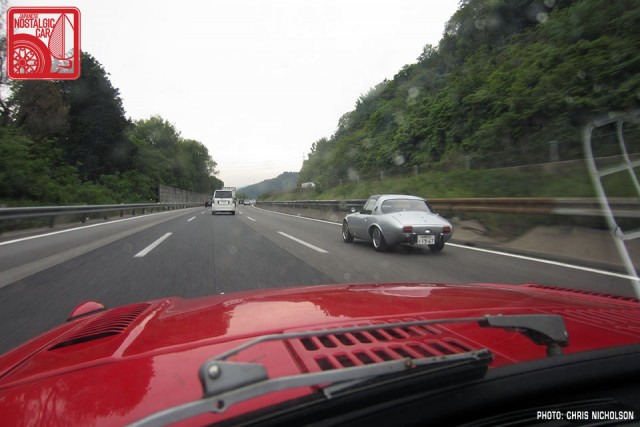 Leaving the museum, we started off with a small pack of Sports 800s headed for Tokyo. We had fun taking turns passing each other while drivers and passengers in modern cars marveled at our classic machines. But as cars pulled off into parking areas one by one, it wasn’t long before we were going solo. 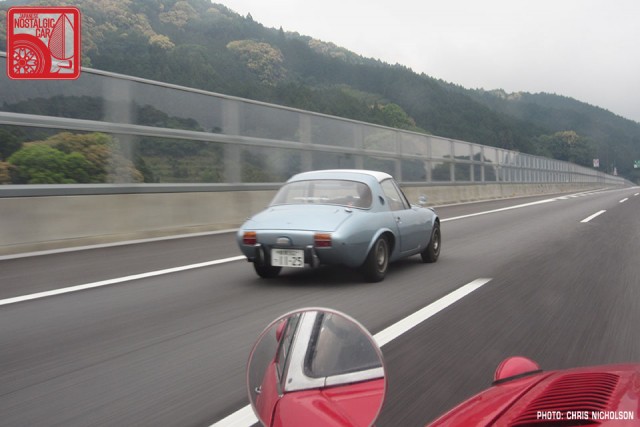 The four-hour drive through Japan’s scenic countryside was surreal, like living inside of a movie, making the contrast with our nighttime cruise of Tokyo’s famous C1 and Rainbow Bridge all the more dramatic.

A cold beer, a big meal, and a hot soak in a tub (even if it was public) were in order. I needed to refresh and recharge, for tomorrow was an even bigger day. 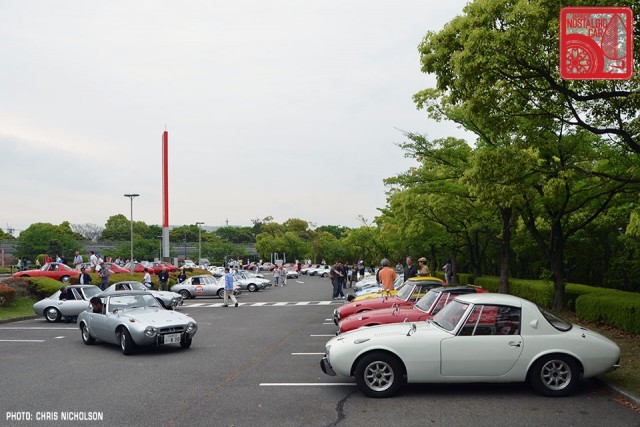 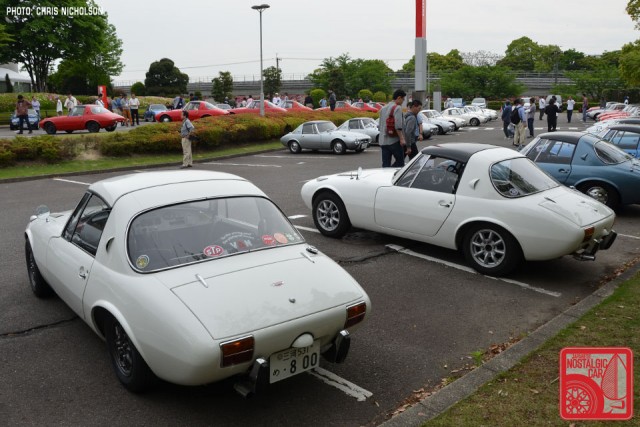 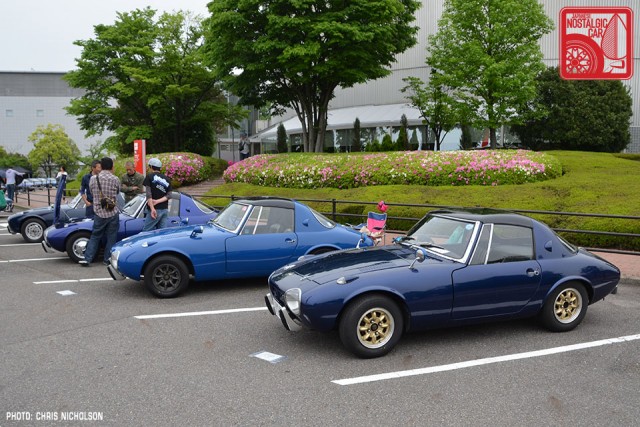 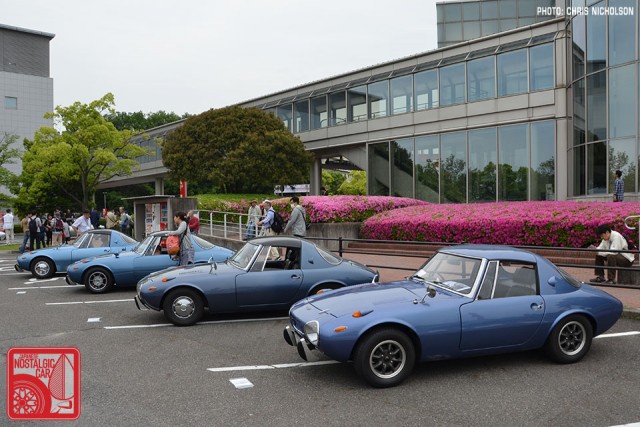 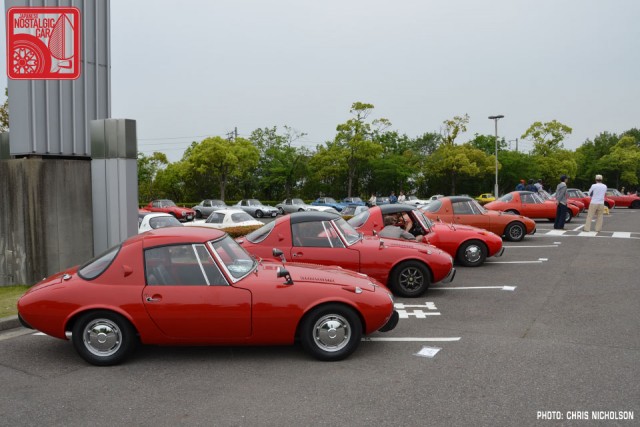 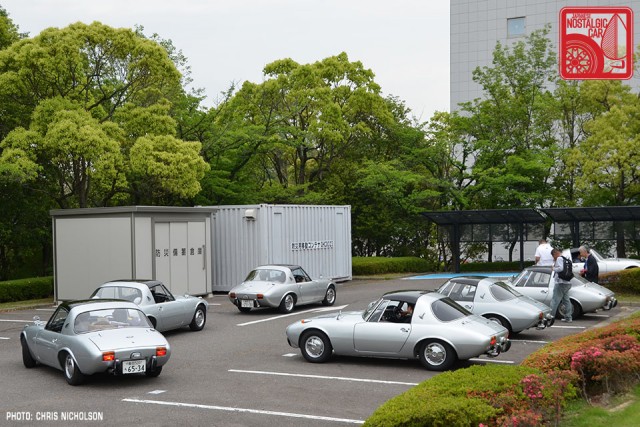 Chris Nicholson keeps the cars running at the Lane Motor Museum and is founder of YouShouldVisitJapan.com.