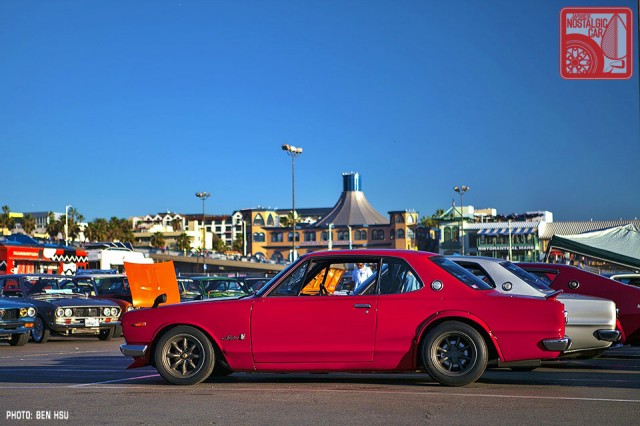 Pacifico is the first show in southern California by Historic J, who have put on events like the Bayline Gathering, Vintage Auto Salon, and Shokuji J-Tin in the San Francisco area. If the show’s name sounds familiar, you might be thinking of the Pacifico Yokohama convention center, which has held such events as Nos2Days and the Mooneyes’ Yokohama Hot Rod & Custom Show, located at the mouth of Tokyo Bay. But the show wasn’t in Yokohama. It was 5,500 miles across the ocean in Santa Monica. 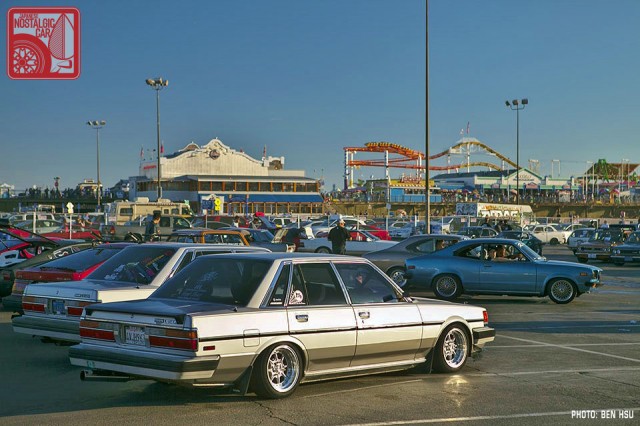 Using the famed Santa Monica pier as a backdrop, the show took place in a neighboring area along the beach. We arrived late in the day, taking advantage of SoCal’s golden sun bathing the eclectic mix of cars in its glow. 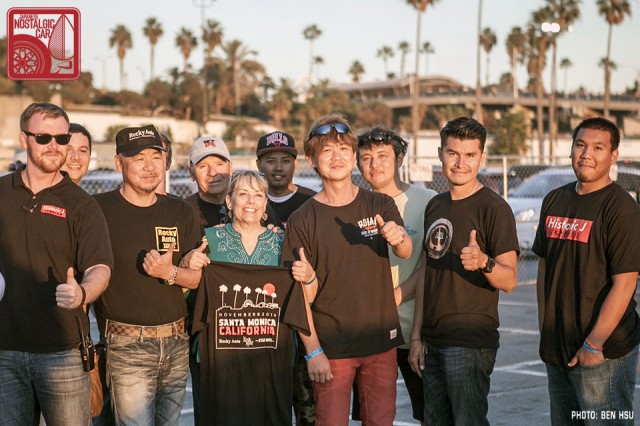 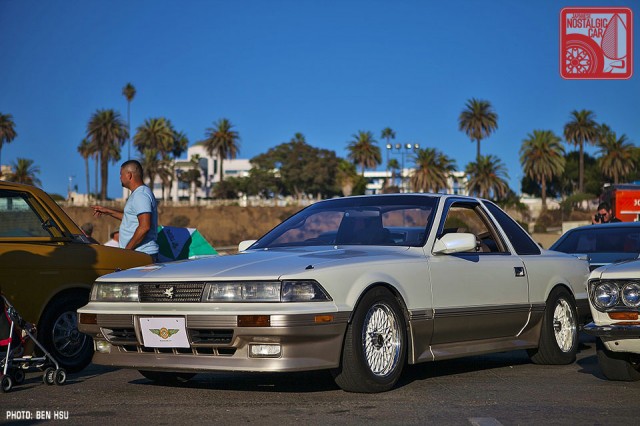 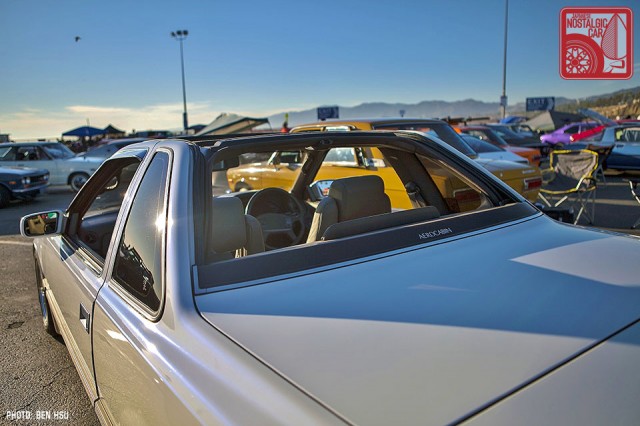 One of our favorite cars at the show was this Z20 Toyota Soarer Aerocabin, a factory folding hardtop roof that stows into the trunk, making the car almost a convertible.

We almost missed this rare KP41 Starlet with  but managed to catch a shot as it left on the back of a trailer towed by a matching Tundra. It was rocking a T-series motor rather than a proper K-series, but it’s an already rare car in the US made even rarer with what is surely a near-impossible-to-find TRD-style body kit. 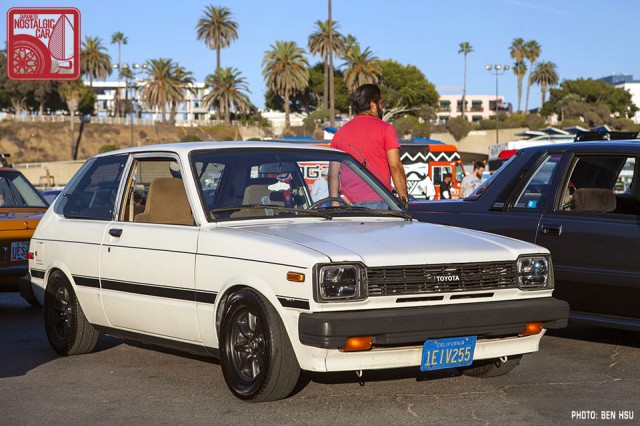 Speaking of Starlets, a very clean and simple KP61 on black Wats and original trim was simply stunning. Sometimes less is more. 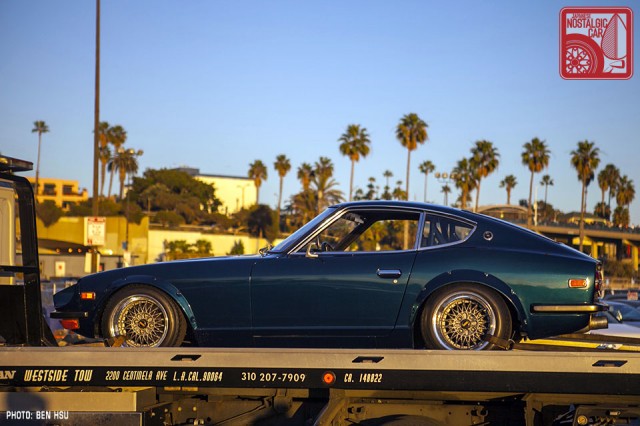 Another trailered car and one of the sexiest Z builds we’ve seen in recent memory was this dark blue S30. Just a simple, clean look with normal-sized wheels give it a timeless look befitting of a classic sports car. 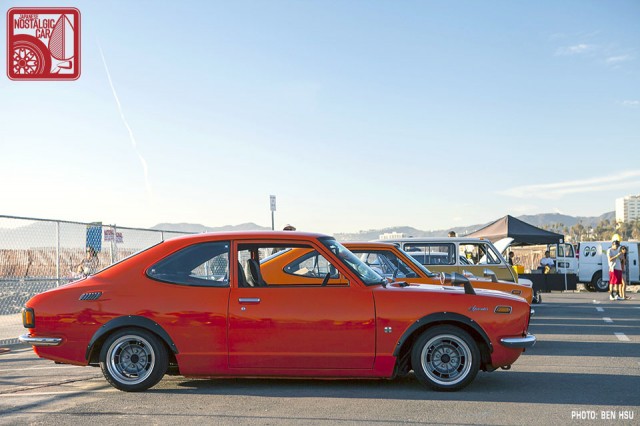 A Sprinter Trueno clone on 13-inch TOSCO wheel proved just how gorgeous the TE27 can be.

A triple threat of A60 Supra P-Types, all with significant mechanical upgrades but looking otherwise stock, made a triple made a beautiful showing. One of the leading 80s classics? 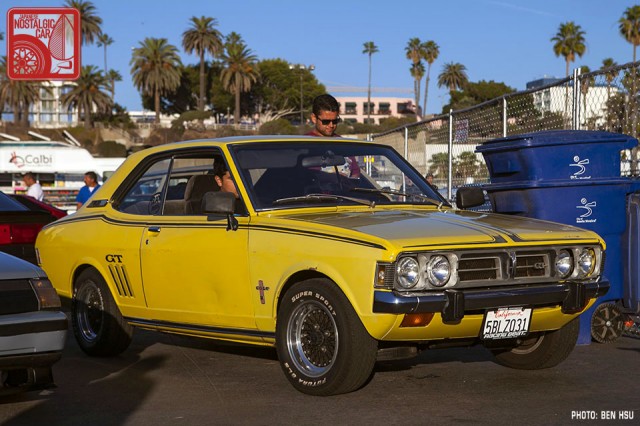 Another rarity, a Dodge Colt-badged Mitsubishi Galant, was the sole captive import represented and was resplendent in period decal stripes outlining the hood and flanks.

A pair of shakotan sleds, an MX32 Cressida and Datsun 610 goon.

Datsun 510s from mild to wild made a strong showing. Swaps ranging from SR20s to FJ20s occupied the versatile sport sedan’s engine bay while exteriors ranged from classic to modern tuner style.

Early Mazdas had a strong presence, thanks to the R-Power crew and other owners of pre-RX-7 rotaries. It was a fantastic collection of 1970s Hiroshima sheetmetal, including a gorgeous blue RX-3 and a couple of stunning RX-2 coupes.

80s RWD Toyotas included AE86s, Celicas, and Cressidas in all their angular, straight-edged glory. You can really see the family resemblance. 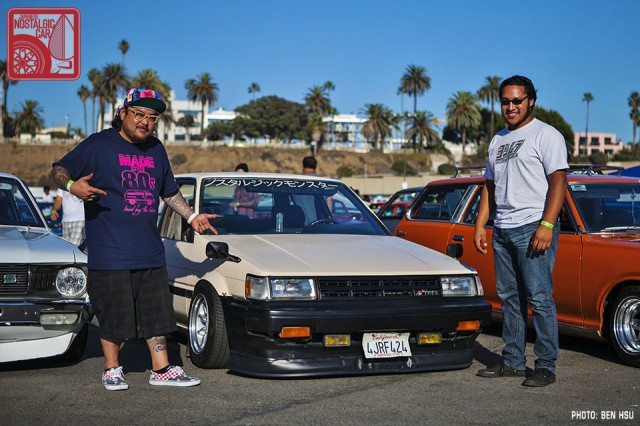 Even one of the least loved 80s Toyotas, the front-wheel-drive AE82 Corolla, and its fans. Made in the 80s, loved by the ladies. 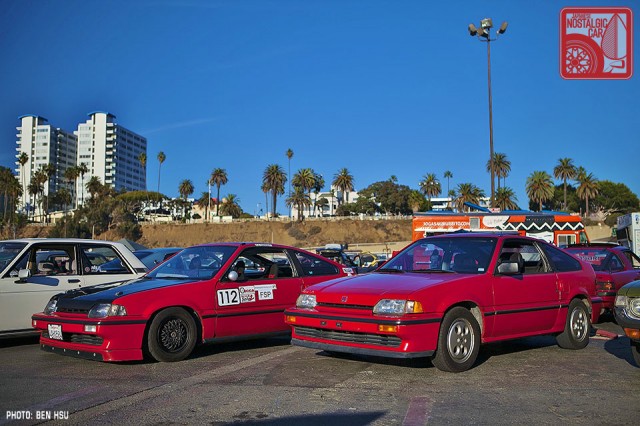 We were also treated to a pair of first-gen Honda CRXes, one mostly original and one race-ready. Both showcased the extreme opposite ends of the CRX spectrum, but are equally a blast to drive in their own ways. 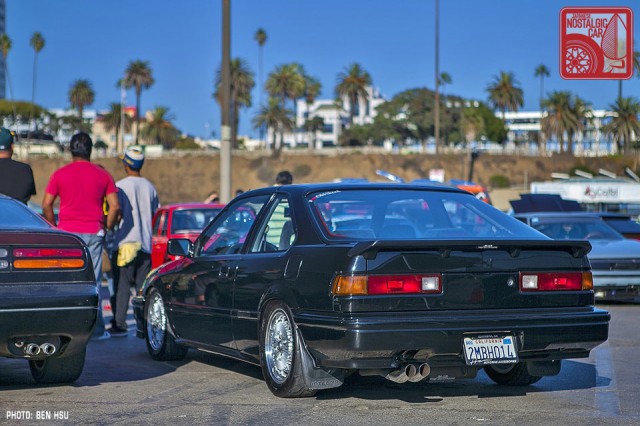 The first-generation Integra doesn’t see much love either, but it’s a genuine classic, from the same vein and era as luminaries like the AE86. This is probably the finest example of a period-correct modified one.

A fleet of gorgeous Z-cars made the trek as well, from old school street machines to resto-mods to the Phantom Z.

Another platform that has seen growing popularity in recent years is the Datsun B210, shown here in styles as diverse as shakotan-style 2-door sedan to Ron Sino-Cruz’s zokusha. 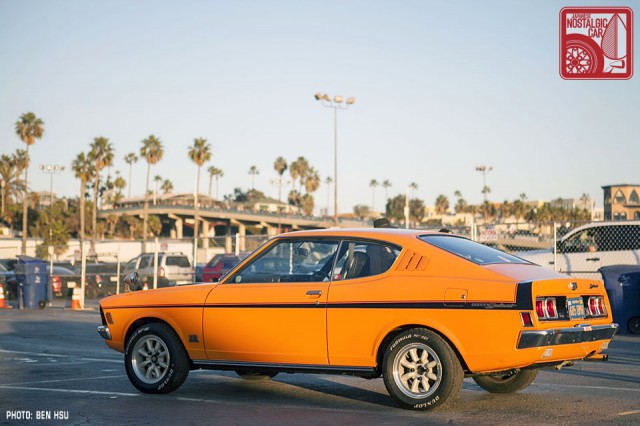 The beautiful Mitsubishi GTO MR that debuted at JCCS made an encore appearance. It’s odd to view such a JDM car in the backdrop of Santa Monica beach, but such are the 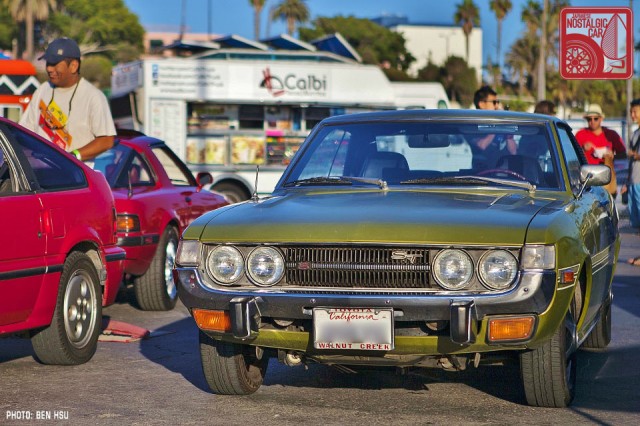 A rare example of a bone stock A20 Celica also made a showing. We met this owner before at Toyotafest a few years ago, and it’s great to see the car is still going strong in stunning condition. 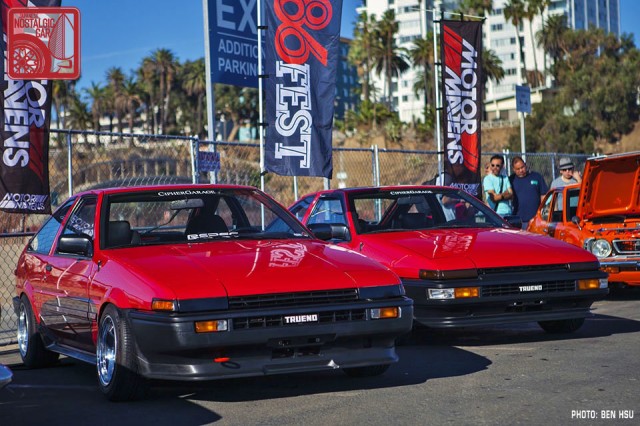 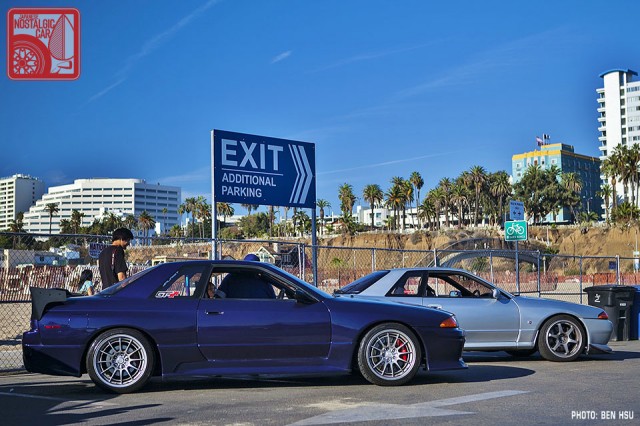 Notable cars included a pair of zenki and kouki AE86s belonging to the Antonio Alvendia of MotorMavens, and a couple of newly imported R32 Skylines courtesy of International Vehicle Importers. 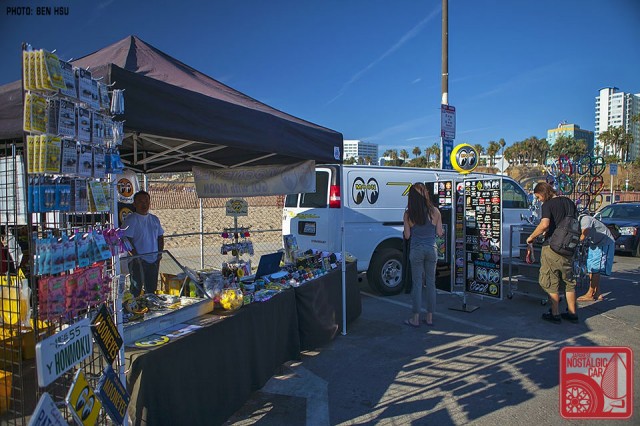 Our friends at Mooneyes had a booth to sell their massive catalog of automotive accessories, fit for J-tin and A-tin alike.

Vintage Spirit garage had a selection of Z and Skyline parts, including custom carbon-fiber door inserts and headlight bezels, as well as fender mirrors, suspension bits and Watanabe wheels. The red AE86 belongs to one of the owners. 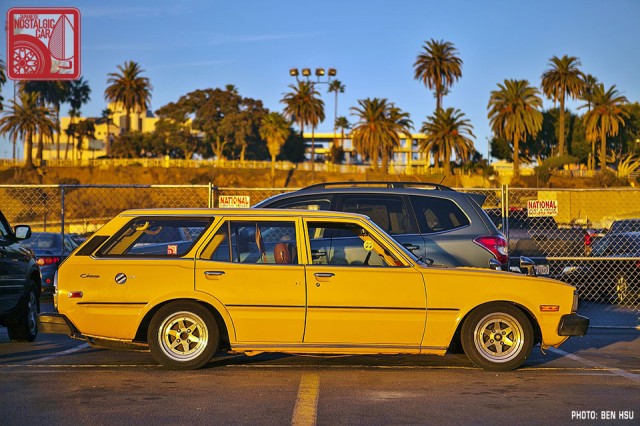 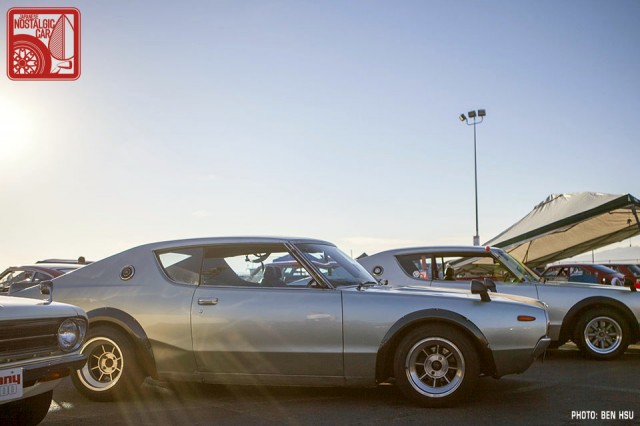 Last but not least are the cars belonging to Pacifico organizers, James Vorasane’s beautiful Corona wagon on Longchamps and Ivan Jarmillo’s kenmeri Skyline on Hayashi Streets. Both caught the glow of the setting California sun as it sped across the sky to rise again in Japan.