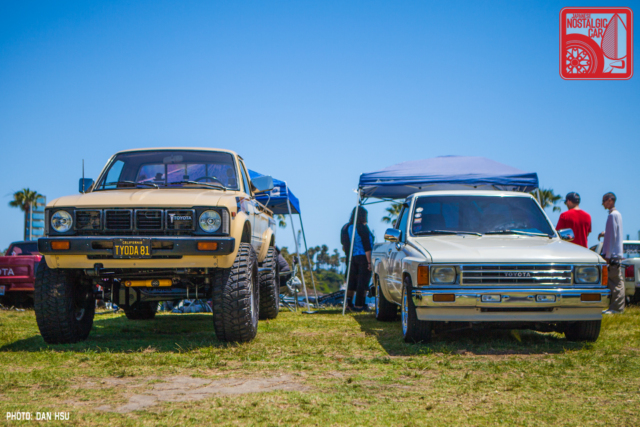 We’ve arrived at the final dispatch from Toyotafest, and in this installment we look at the trucks, SUVs, and vans that graced the show. Everyone loves Celicas and Supras but these unsung heroes are an undeniable part of Toyota’s success (and perhaps just as diverse as their car lineup).

Whether it was off-roaders still waring the dirt from its last trail run or stylin’ mini-trucks, there seemed to be more trucks at this year’s Toyotafest than any in recent memory. 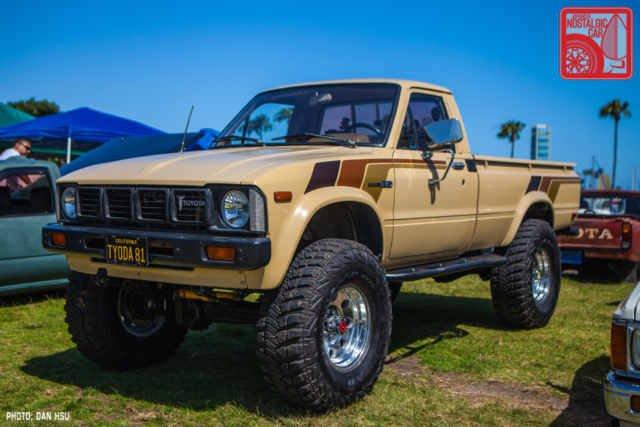 We saw Carlos Araiza’s 1981 HiLux 4WD last year, and it remained one of the highlights of the show in 2018. Achingly original except for its Goodyear Wranglers, its 557 Creme paint and decal stripes were perfection. Built during the couple of years where the 22R engine was offered with a solid front axle, it is a highly desirable model for its off-road prowess. Sadly, that also means very few have survived in as gorgeous a condition. 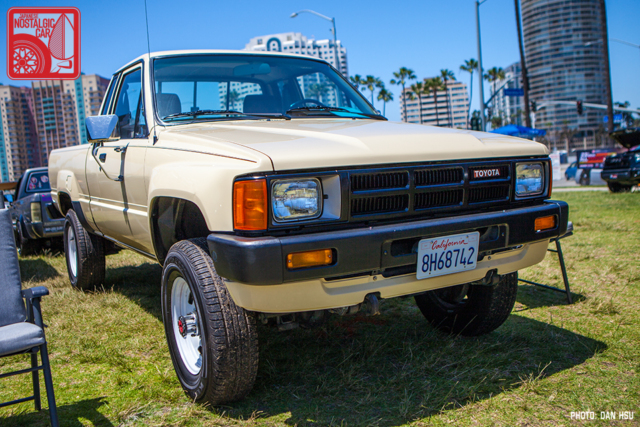 Speaking of rare models built during a narrow window of sought-after options, Gary Foreman’s 1985 model is perhaps the ultimate example. Halfway through the 1985 model year, the carbureted 22R was replaced with the fuel-injected 22R-E. 1985 also marked the last year solid front axles were offered, and by 1986 it had been replaced with an independent front suspension. Only during the briefest of openings could one buy a 22R-E truck with the solid front axle. This example might also be the best preserved, with only 32,000 miles on the clock. 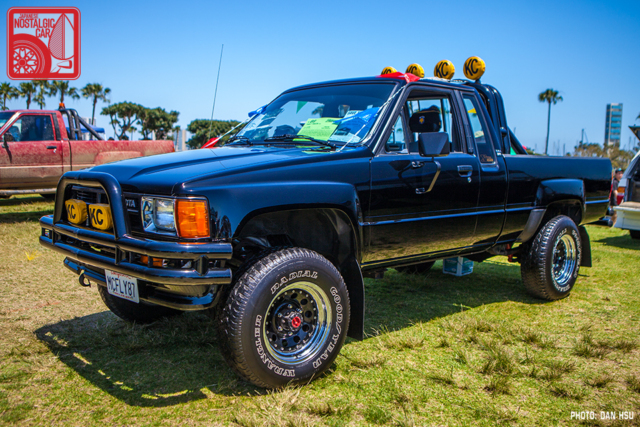 Jack Russo returned with his 1987 SR5, a faithful replica of Marty McFly’s dream machine. Jack calls it the “true uncredited hero of the Back to the Future trilogy” and it has been autographed by nearly every cast member save for Michael J Fox. 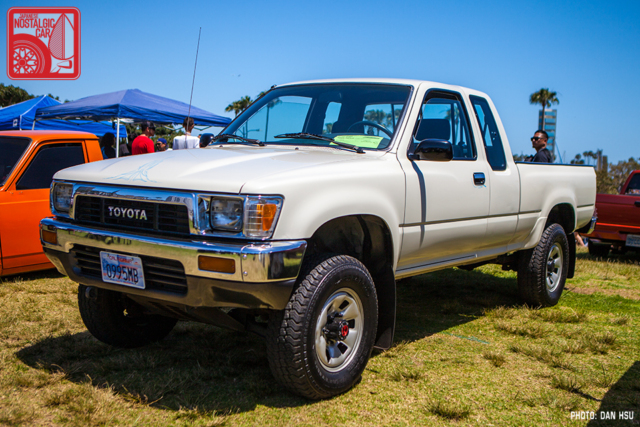 Ivan Schreiber 1989 XtraCab SR5 is another example of a rare basic workhorse that somehow survived decades of abuse. Finished in utility white and equipped with a 5-speed transmission, one wonders for what purpose it was originally purchased. 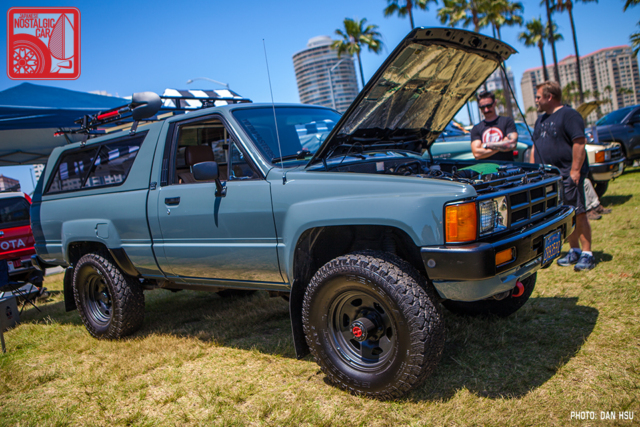 Tim Diebert’s 1985 SR5 took a different tack. The drivetrain and suspension have been rebuilt to stock spec, but the truck has undergone cosmetic changes throughout. Before he began customizing his truck and refurbishing the engine in 2017, the 22R-E had logged 328,000 miles without a rebuild. 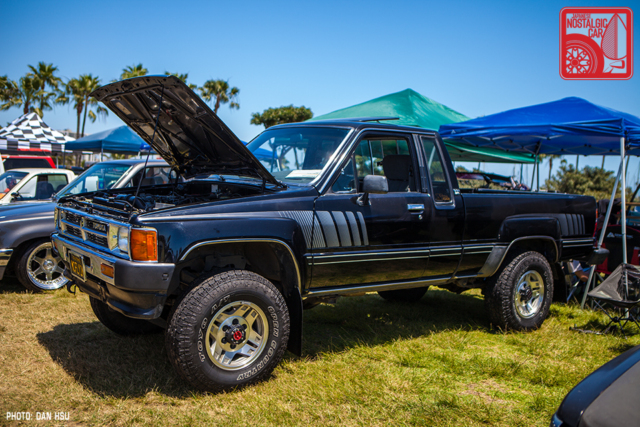 We didn’t catch the name of the owner of this 1987 XtraCab, but it was another impressively clean survivor. Resplendent in 202 Black with silver decal stripes, it’s what Marty’s truck would’ve looked like without the 80s mods. 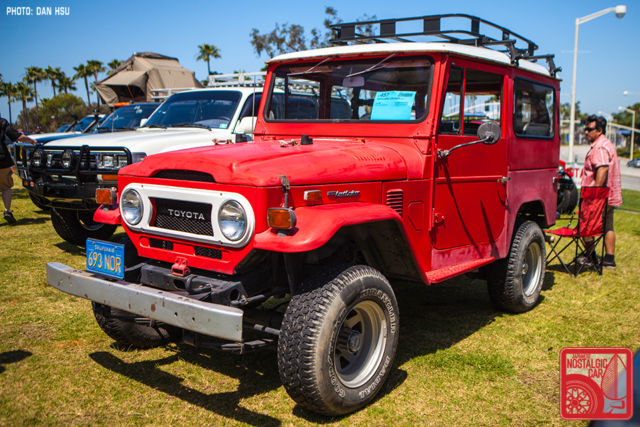 This year’s Toyotafest had more Land Cruisers than we ever remember seeing. Manuel Mendoza’s 1974 FJ40 was an honest workhorse, billed as an unrestored original (though repainted at some point in its life). It looks like it’s been on some adventures. 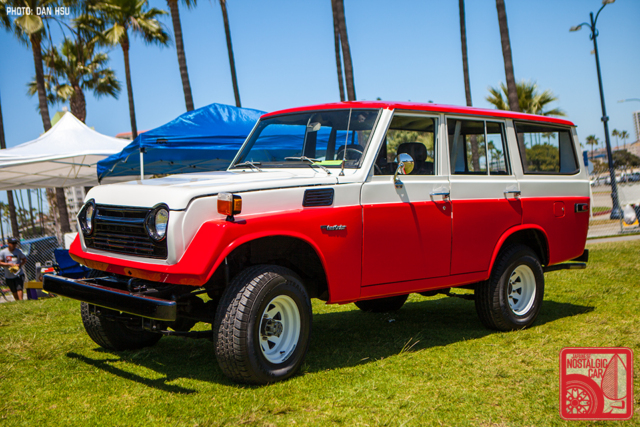 Gerard Lampano says his 1977 FJ56 started out as a “piece of rust” but was painstakingly restored, retaining its original 4.2-liter 2F and 4-speed transmission, and finished in a beautiful factory red-on-white two-tone. 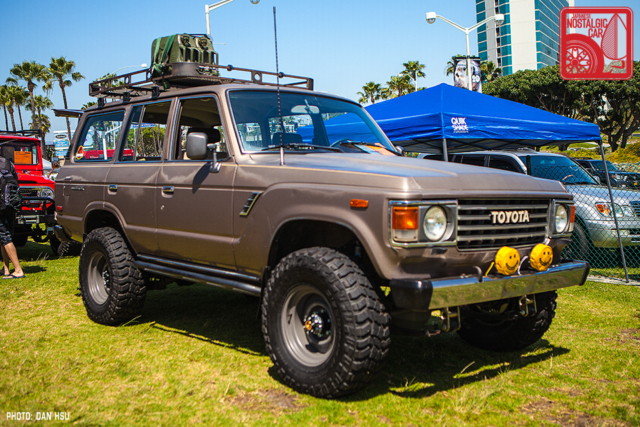 Pierre Rorno’s 1986 FJ60 still wore its original paint, called Beige Metallic by Toyota even though it’s more of a brown. It still has its original 2F, which has clocked 389,000 miles, though its task was made easier at some point with a H55F 5-speed swap. According to Pierre, even the safari basket is period correct, made by Con-Ferr. 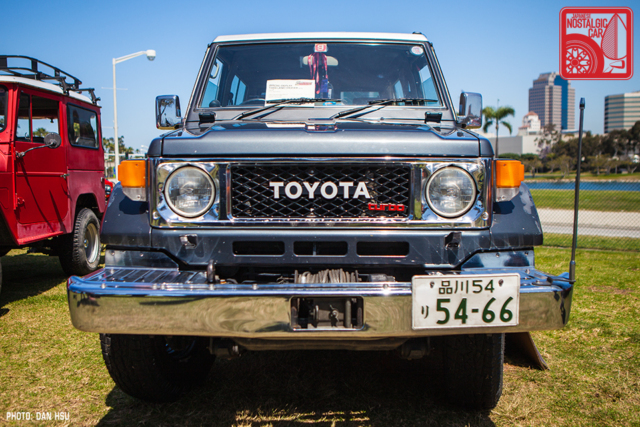 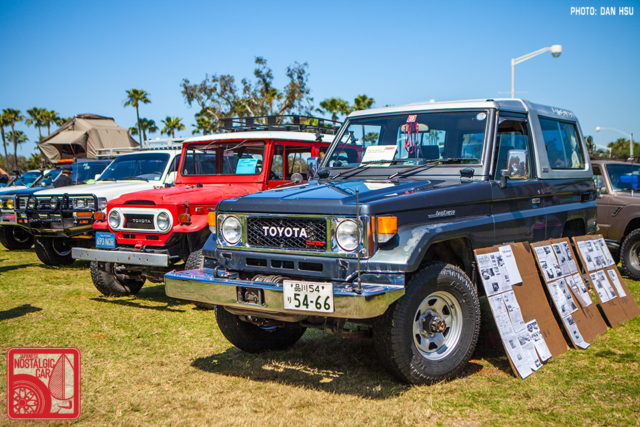 Steve Kopito brought a 1989 BJ74 imported from Japan. The 70-series Land Cruisers were never sold here, but was beloved enough to be re-released in Japan a few years ago. This short-wheelbase 2-door example was powered by a B-series 4-cylinder turbo-diesel with just 79,000km (49,000 miles) on the odometer.

BTB Products is one of many companies updating classic Cruisers with modern components. The company brought not only a 100-series and FJ40 Land Cruiser demo cars, but a bare frame with drivetrain to show a modified 2F inline-six and disc brake setup for keeping up with contemporary traffic. 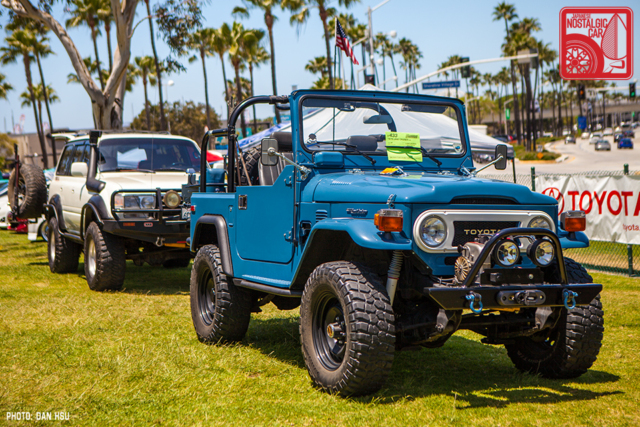 James So’s 1979 FJ40 was a beautiful example of a classic Cruiser properly resto-modded. For his efforts, he took home a medal for the Best Land Cruiser category. 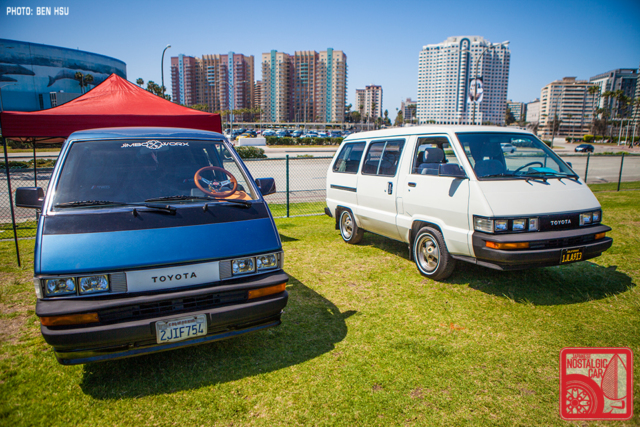 Another model that is is rarely seen in pristine condition is the 1980s Toyota Van. Most of the ones we spot in the wild have lived hard lives with many decades of god-knows-what happening in the cargo areas. That’s why we were glad to see more hard core enthusiasts taking good care of these fascinating machines, and by more we mean three. Jimmy Olguin’s blue 1988 was lowered and sported a Nardi-esque wooden wheel — perfect for a mid-engined, RWD Toyota. 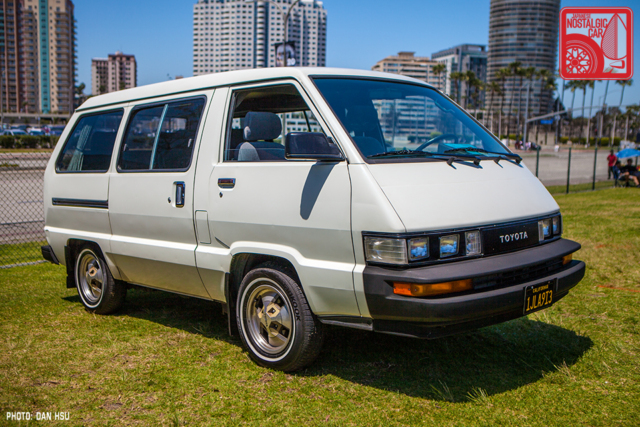 Jonathan Delgado’s 1989 was in amazing condition, and even had period Toyota pizza cutter wheels. Original and unrestored, it was the rare Van example that didn’t look like someone had been hauling farm animals in it. 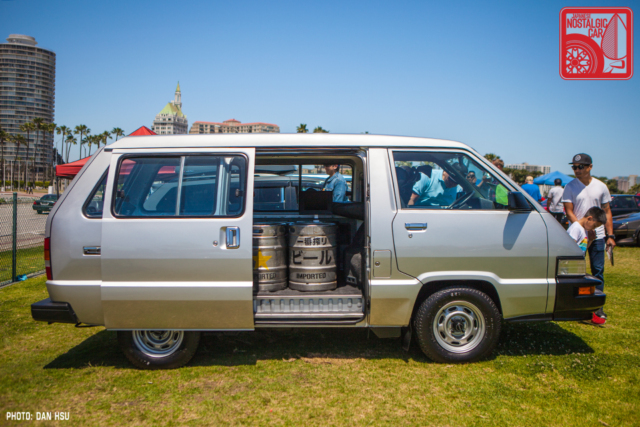 The most pristine Van, however, was Edgar Briones’s one-owner 1987, which has been cleverly converted into a hauler of Sapporo beer. Despite over 256,000 miles on the clock, it still runs its original engine and has been restored to a condition indistinguishable from showroom new. Edgar received a much-deserved award in the SUV/Van class. 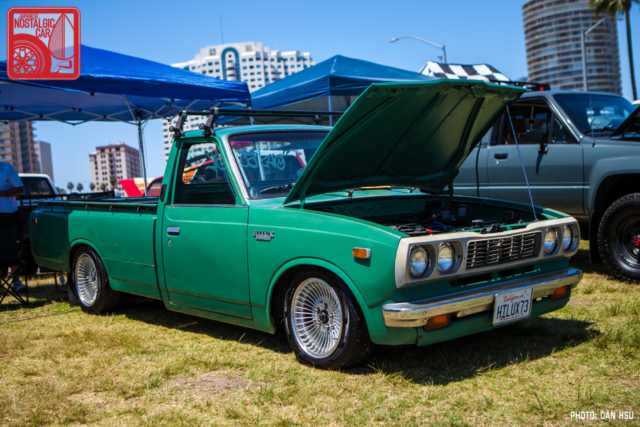 Walter Nuñez drove his 1973 HiLux all the way from Stockton, California. Beautiful in what appeared to be original paint, under the hood was an 18R-G twin-cam replacing the stock 18-R single-cam. 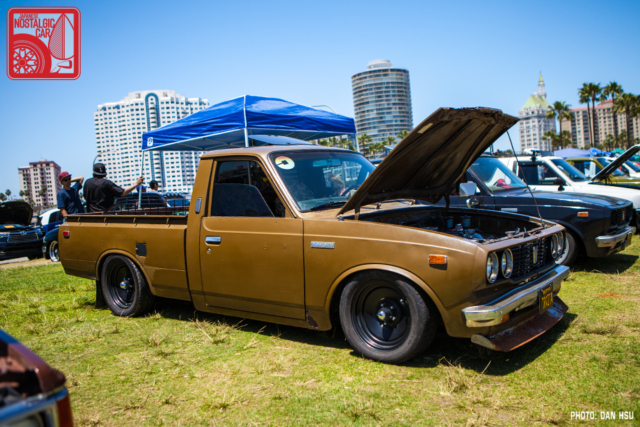 Sean Williams’ 1975 HiLux was still wearing its patina’d but original 415 Pueblo Brown paint. With painted black smoothies, a Weber carb and a mild cam, it gave off a nice rat rod look.

Ever Ramirez’s 1976 long-bed HiLux SR5 was another survivor. Though the decal stripes were peeling, the original 637 Olive paint still looked fantastic for its age. Mostly original except for a 2-inch drop, it exuded a cool period feel, with neat details such as custom center caps in Toyota’s red-orange-yellow tricolor. 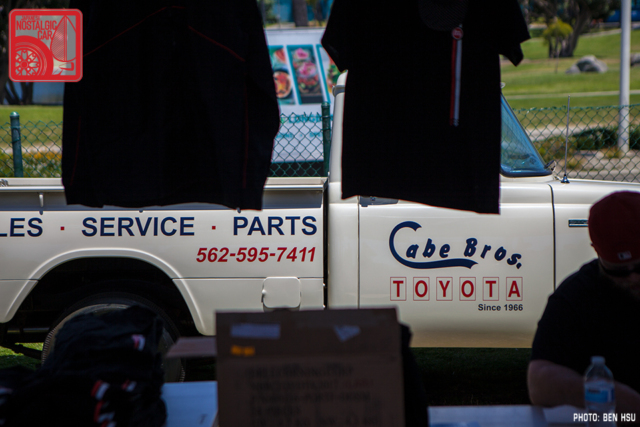 This year there were no less than four Toyota Stouts, but that’s three more than most shows. Cabe Toyota of Long Beach can always been relied on to bring their old shop truck, along with a slew of Toyota parts old and new for sale.

Lou Bircheff’s 1965 Stout had one of the best patinas we’ve seen on a 1960s Toyota. It’s coolness comes from the fact that it’s all natural, earned from a lifetime spent in Wyoming as part of a the Riley trucking company’s fleet. Naturally, the Honda Motocompo in the back didn’t come with it. 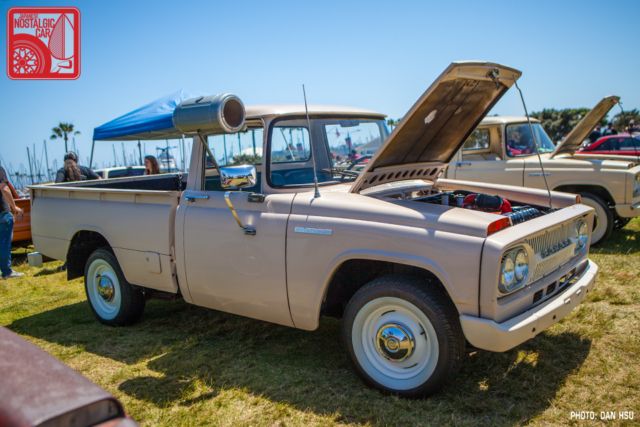 Dune Nguyen’s 1967 Stout was a beautifully restored example. The period correct swamp cooler and white-painted steelies with white-wall tires completed the look, and the workmanship was tremendous. In any other year, it probably would have taken a medal, but this year there was stiff competition among Stouts. 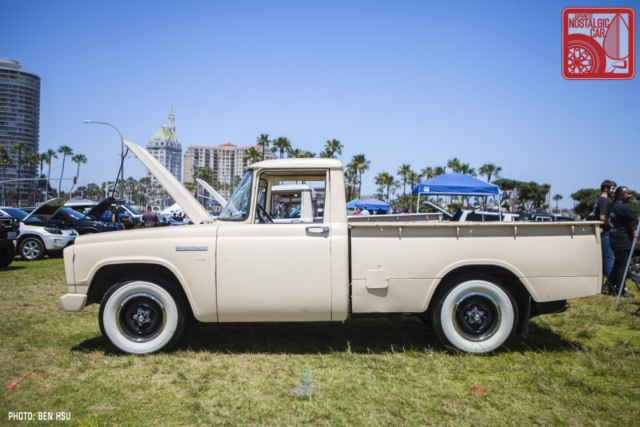 Gerardo Hermosillo’s 1966 not only took home a medal for Best Truck, but the overall Best in Show. Bought from the original owners, the engine is said to have less than 8,000 miles on it. The truck was reportedly repainted in 1980, and the only modification its painted wheels and large whitewall tires for a “California look.” 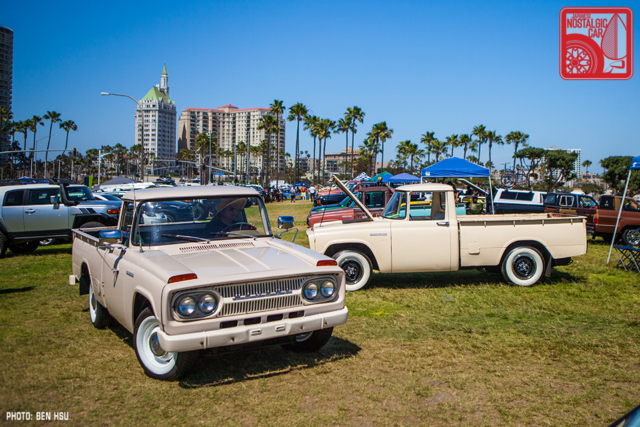 And that does it for our annual tour of Toyotafest, a great reminder of all the wonderful cars that have come out of Aichi. It’s also the only car show in the country where you can see examples of some of the cars and trucks we’ve covered, not to mention having them gathered all in one place. Until next year.