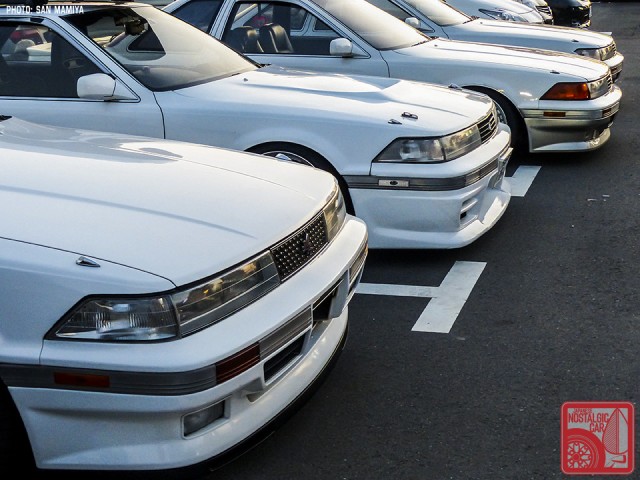 In Part 02 of our New Year Meeting coverage, we delve into the parking area to unearth gems as good as anything inside the show. Some of them aren’t able to make it simply because of the age cutoff, others perhaps have owners who don’t necessarily care about showing off their cars. In any case, being greeted by a row of gorgeous Bubble Era Soarers is reason enough to go exploring. 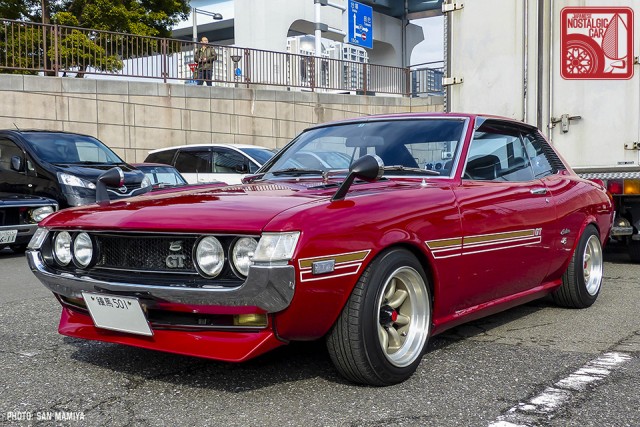 Backed up against a box truck was a fresh daruma Celica 1600GT that looked like a recent restoration. Back in the day most Celicas didn’t run Wats, and the gold with polished lip 8-spokes give it an incrementally more modern appearance. The body work was very impressive, its crimson flanks surely turning heads on any Tokyo street.

Equally mesmerizing was heavily flared Savanna RX-3 street-fighter. An intercooler peeking from the air dam hinted at a turbo 13B setup. It was on the hunt for what we were assume were Nissans, blocking a shot of a sharknose Bluebird as it prowled for Hakos. 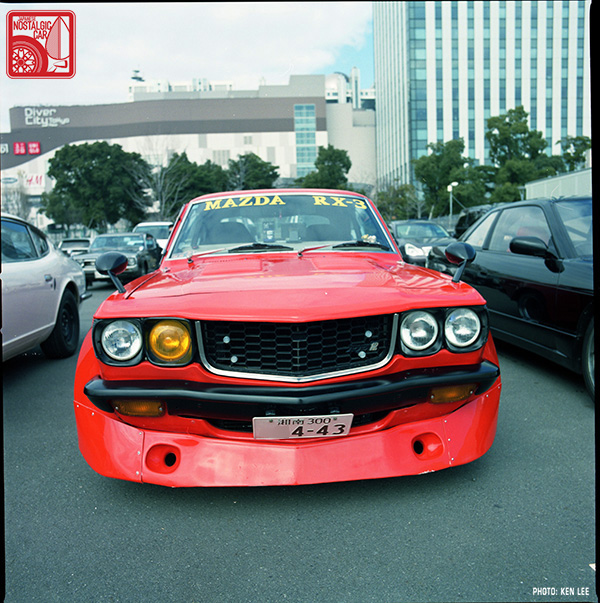 Practically jumping out from between an S13 and and a Fairlady Z as if to say, “Wanna fight?” was an RX-3 that harkened back to mid-70s to 80 style, with black bumpers and Katayama flares. In the 70s, the RX-3 was the “it” car because of its rotary power and low cost compared to a Celica GT. It’s good to see these cars coming out the woodwork or resuscitated as most examples are extinct.

Surrounded by a flock of white sedans, this purple Fairlady Z is actually an S130, the platform that we know in the US as the 280ZX. This style of radical customization was more prevalent in period and this car was probably customized years ago — the Skyline taillights are a clue — and likely revived since these cars are once again in fashion and the car is is too cool not be a part of it. 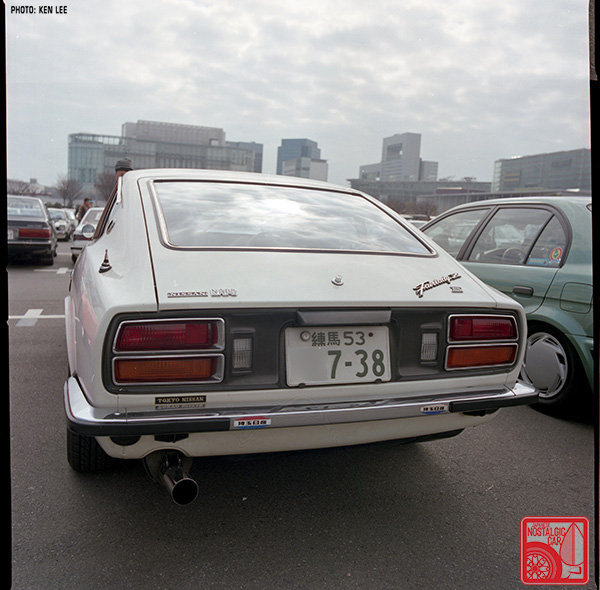 Beside a perhaps surprisingly well-kept and lowered Toyota Corsa (aka Tercel in the US) was a diligently preserved S30 Z. The Fairlady’s two-digit Nerima license plate indicates it’s been registered in expensive and garage-limited Tokyo for the extent of its life. It even sports the original and much coveted black and gold “Tokyo Nissan” dealer sticker, a decal affixed to all new cars sold from showrooms located within the capital metropolis’s borders. 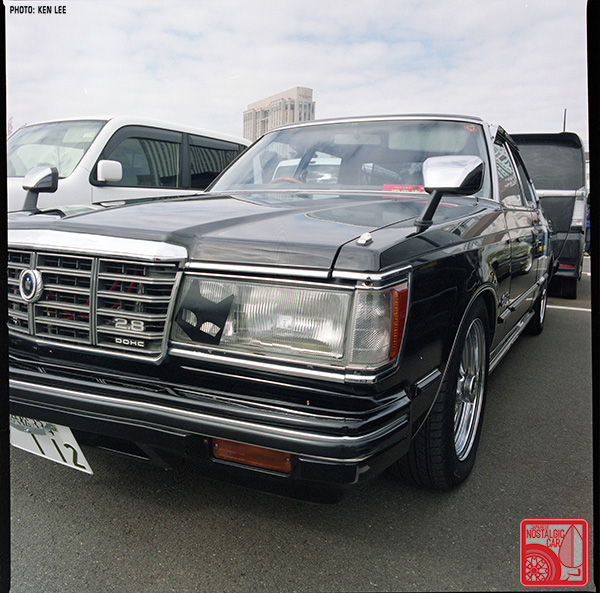 Lurking amongst a pack of upright minivans was a black S110 Toyota Crown, dignified and formal in traditional black and long-stemmed and blocky fender mirrors. However, like a congressman with a streak of perversion beneath his three-piece suit, a skewed Marchal sticker over the high-beam indicated that this conservative sedan had a somewhat freaky side. 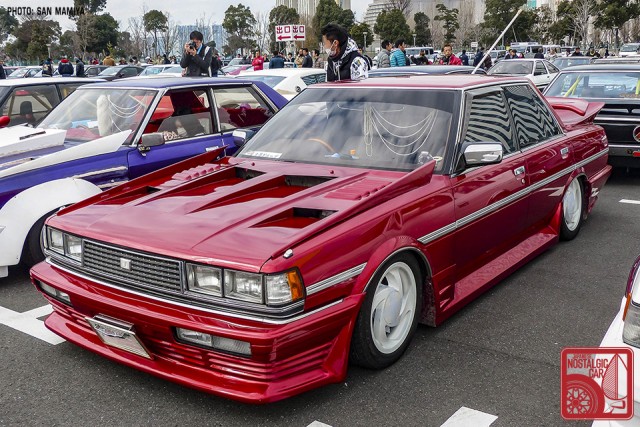 Straight out of 1985 comes a GX71 Cresta with Super Volk swirlies and a very period correct haisoka aero kit. The look may seem extreme to purists, but the it has all the hallmarks of a Bubble Era neo-bosozoku sled, an evolution from the Group 5 racers clearly visible and the quality of the build indisputable. 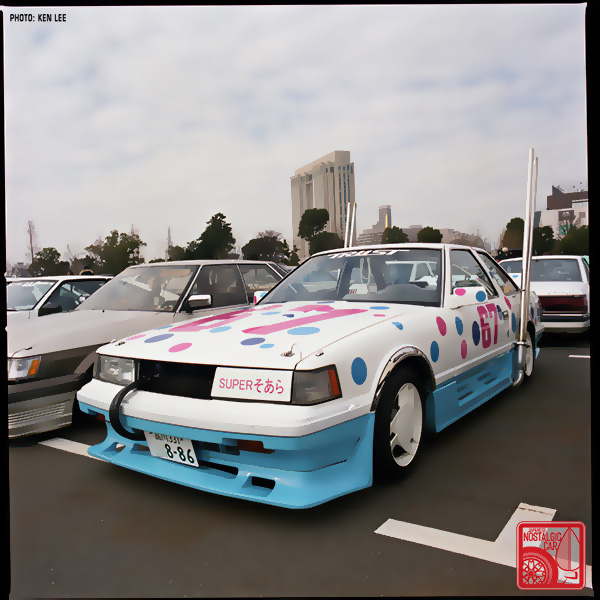 This, of course, is a replica of the star car in Shakotan Boogie, the famous manga celebrating kaido racers and bosozoku life. The MZ11 Soarer in two-tone white and blue with the number 67 on it — the polka dots were a later addition — was the vehicle by which the hapless lead characters would get in to all kinds of trouble. This car is as iconic as the panda AE86 in Initial D, and this story came out a decade before. 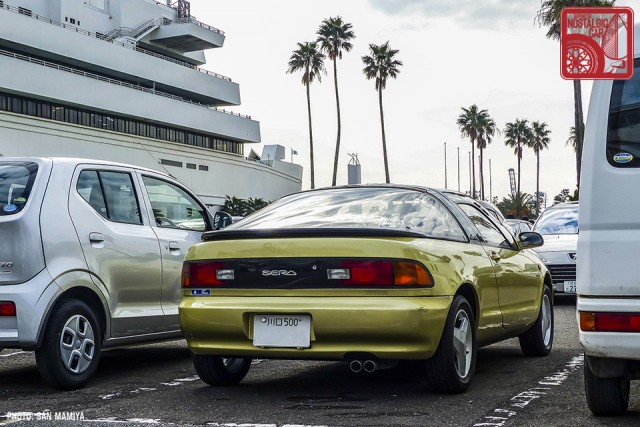 If it weren’t for the Alto, kei vans and Peugeot present, this photo could have come straight from the Queen Mary side lot at JCCS. In the middle a Toyota Sera maintains its JDM weirdness with its standard but unique glass canopy and butterfly doors. 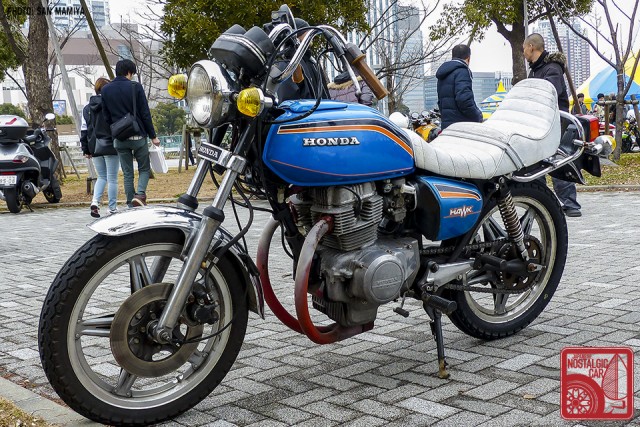 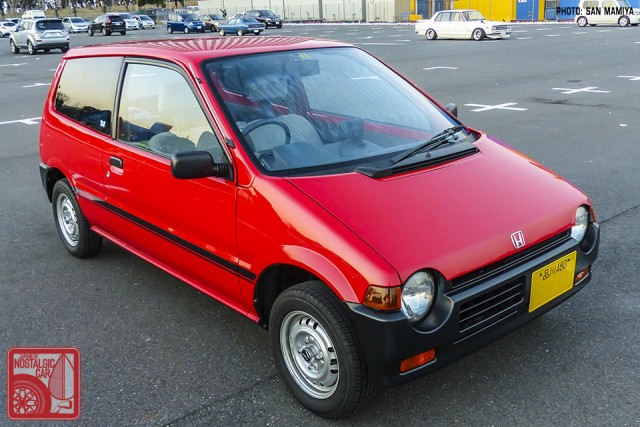 Go to enough car shows in Japan and Skylines start looking commonplace. What really catches your eye then are cars like the early-style Honda Today, a zippy little kei hatchback with an adorable face impossible not to love. Amazingly, there’s only a 27 percent difference in displacement between the Hawk and the 550cc Today. 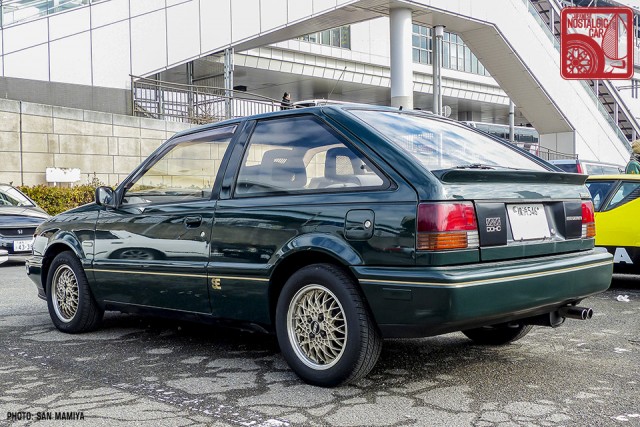 The Gemini SE is a prime example of the Japanese fondness of Euro car parts. Not only did it come stock with BBS wheels, Recaro seats and a Momo steering wheel, the paint is British racing green and the suspension tuned by Lotus. 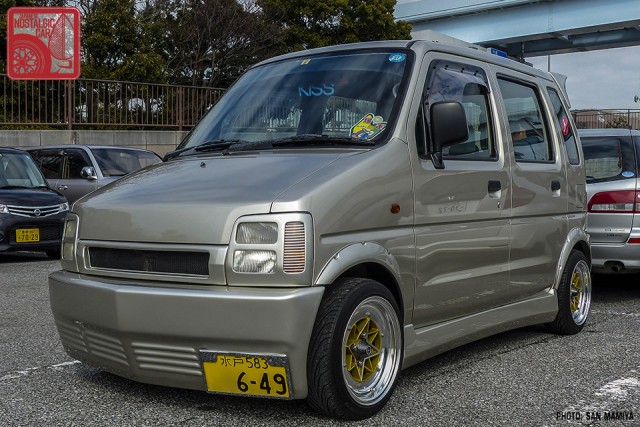 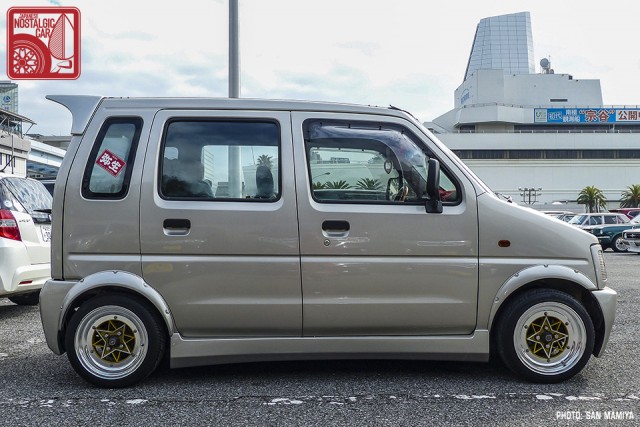 The Suzuki Wagon R is one of Japan’s most popular kei cars and it’s though it’s not nostalgic yet, it caught the eye of our illustrator San Mamiya. With Star Sharks and and riveted flares, it exudes a certain old school flavor. 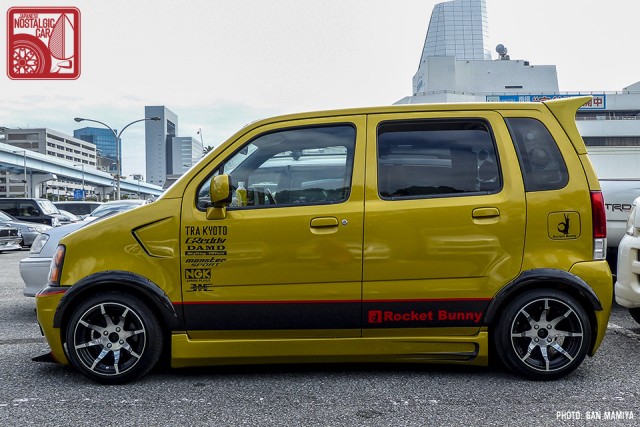 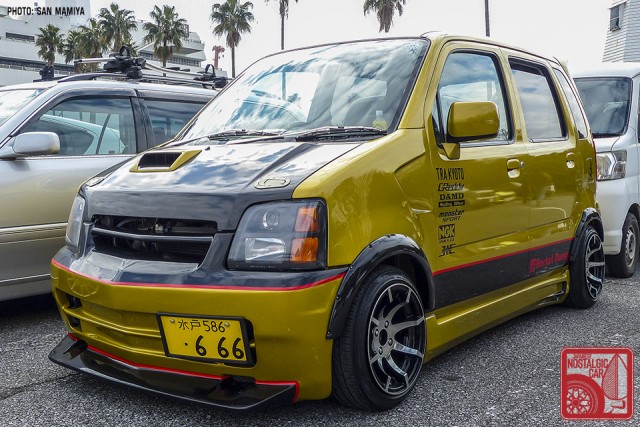 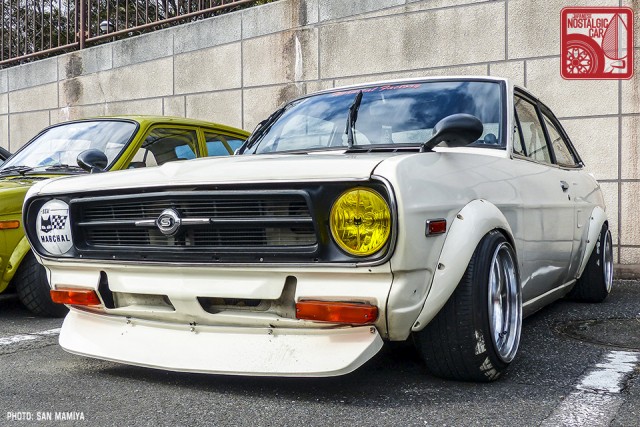 Here, of course, is the B110 Sunny of Teru Inoue (aka Teru the Damaja). It looks a little different from when we saw it at the New Year Meeting a few years ago, but it is still one of the most instantly recognizable, beautifully photographed and famous B110 Sunnys in the world. In his interview with Stance Nation, Teru said that Shakotan Boogie was his Bible.

For sheer aggression, however, it’s hard to top this bestickered, de-bumpered Bluebird. With tuning more reminiscent of a new Hako street racer, it’s all mod, no resto. A sense of humor comes through in the stickers too, like the Kuroneko Yamato Transport logo with a Marchal cat’s head. 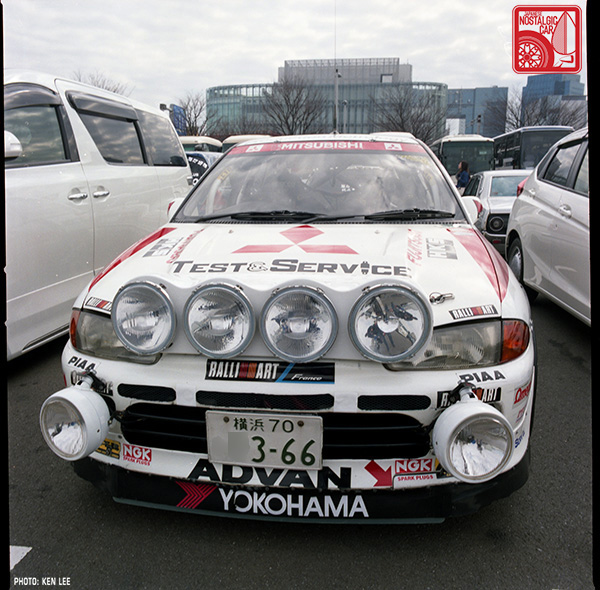 Sure, having enough lumens to melt a vampire may seem excessive in perpetually lit Tokyo, but this fourth-gen Mitsubishi Mirage is one of the more famous rally replicas in Japan. And the owner actually uses it in the way it was intended. 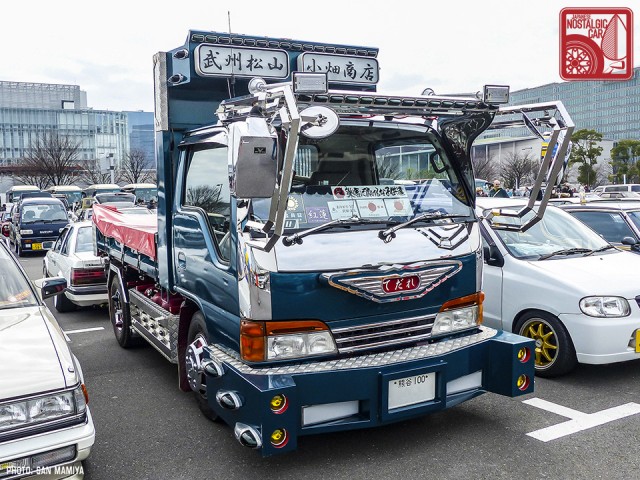 And last but not least, we leave you with an Isuzu Elf dekotora dump truck. Why? Because dekotora. That is all. To be continued…