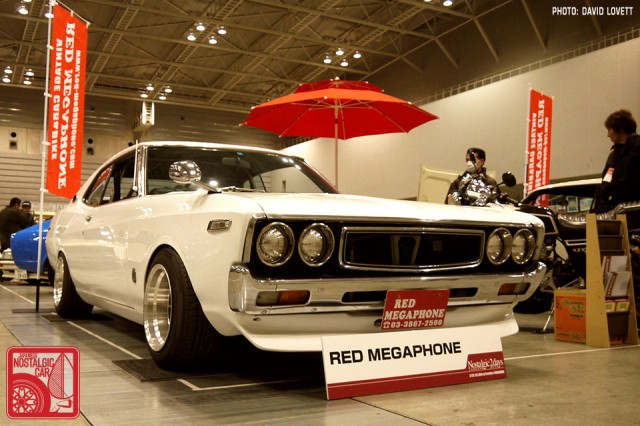 We start our final installment of our 2014 Nos2Days coverage with a beautiful butaketsu Laurel by Red Megaphone. The Nissan restoration shop is known primarily for its Skylines, but this white C130 hardtop showed that there’s more than hakosukas and kenmeris in the Nissan playbook.

We found a different kind of appreciation for life in the form of the Profit, Inc cars. Hailing from Shizuoka, the cars in their stable are nothing less than cream-of-the-crop VIP sedans. Toyota Crowns and Nissan Cedrics make up 90 percent of their collection with a common price tag of “ASK”.  Nothing is too extreme from quad exhaust tips, 100-spoke rims and metallic brown paint only Jim Rockford could appreciate.

One in particular that stood out from the rest was an S120 Crown Royal Saloon G 3000 sporting wire spokes and gold center caps. Better still, under the hood were newly-plated brackets and braces. The attention to detail on this 4-door blast from the past was second to none.

East Car had a display of kenmeri Skylines, including a standard 2000GT-X trim level example. Though they were the more common C110 back in the day, the increased number of GT-R clones — like the silver car with the single cam straight-six) have made these more pedestrian model the rarer ones.

Nearby was a familiar S54 Prince Skyline GT-B. The car is a beauty in its own right, but what makes this car so special is the owner. Yoshikazu Sunako shows up every year with the same Prince and that big Russian fur hat. You might remember him as the one responsible for launching the Skyline Legend at the 1964 Japan Grand Prix. He’s a different kind of nostalgic hero.

Rays Wheels was also present, sporting their wheels on a nice X30 Toyota Mark II with a tasteful lowering job. Tucked in the back was a little surprise: a Honda Motocompo with a custom black paint job, LV seat cover, and  no less than 2 cup holders plus a spot for your phone. This just may be the most VIP Motocompo ever.

Beyond cars, the show had live performances from bands like Crazy Ken performing his hit song “Isuzu Bellett 1600GT” and the Showa era idol duo Orange Lady. I was getting hungry, so what better way to eat like a prince than by eating a Prince Motors-branded snack? This one had a sweet bean paste in the center. 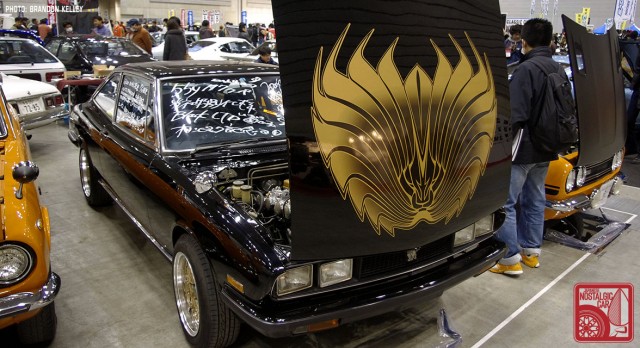 American muscle in a Japanese Car show? Not hardly. More like Italian-inspired honkey tonk. This Limited Isuzu 117 Coupe at the Isuzu Sports Eagle had cues from the Bandit with gold spoke wheels and an animal on the hood. Looking a little closer, though and that gold graphic is actually the Isuzu Shisa mascot. 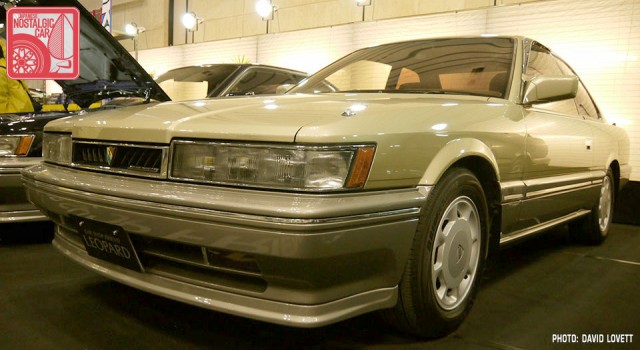 This F31 Nissan Leopard (known as the Infiniti M30 in the US) was one of about seven brought by the affably named Car Shop Friend. The specialty shop is a Nos2Days regular, and many of their customers were probably inspired by the 80s TV show Abunai Deka.

Speaking of cars made famous by TV shows, there was a replica of the famous Initial D Toyota AE86, complete with Fujiwara Tofu logo on the door. The former 80s Hero feature car could’ve been the same one we spotted at the Meiji Jingu Classic Car Festival but there’s certainly no shortage of panda hachiroku in Japan. Funny enough, you can even find a similar car made by Hot Wheels with the JNC inkan on it. 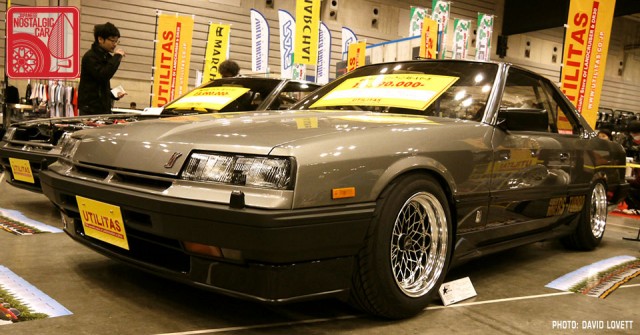 Next up, Utilitas. Owner Ikegaya-san was kind enough to unlock the doors of one of his many beautiful DR30 Skylines so we could have a gander at the totally bodacious striped-cloth interior. The engine bay was also a glimpse at the beautiful chaos that nowadays would be covered by chunks of plastic. If you’re ever in need of either one of Ikegaya-san’s two loves — Toyota Land Cruisers and DR30s — you know where to go.

At the RS-Watanabe booth was quite possibly the belle of the ball in style and swagger: a dark green Mazda Savanna RX-3 GSR. Not much is known about this beast other than the fact that it was sporting mega blister fenders so it could tuck in a perfect set of black Wats. It was a favorite of just about everyone at the show, absolutely dripping in style, and just looking at the taillights could bring a man to tears.

And with that, we come to the end of another successful Nostalgic2Days. If you’ve missed any of the previous installments, be sure to check out Parts 01, 02 and 03.