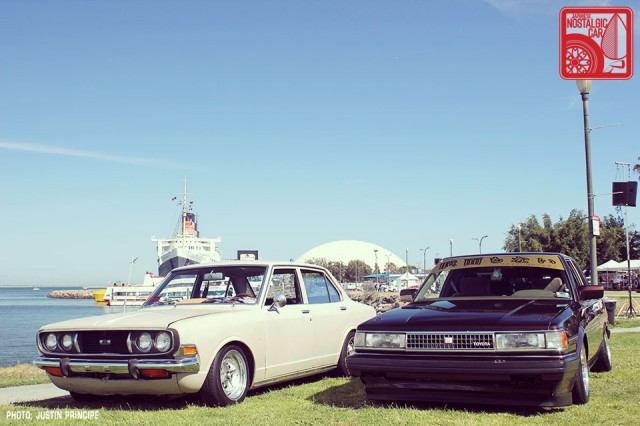 We’ve seen the high-end luxocruisers that gave Toyota its reputation of apocalypse-grade reliability and the long-forgotten sports coupes Akio Toyoda hopes will rekindle passions for his great-grandfather’s company, but Part 03 of our Toyotafest coverage is about the everyday cars and trucks that made the ToMoCo kingdom possible.

First, the humble Corolla. From touge terror to drag racer to economy sedan, it’s done it all. Rafael Casas’ peanut and Santos Renevalez’s drag TE71 show the diversity of styles the Corolla has spawned. Even front-drivers are getting love these days, as proven by Rodrigo Catibog’s AE111. Not only is it rocking a JDM Sprinter Carib nose, but has a swapped 20-valve black top 4A-GE, 6-speed, and LSD, all sitting on some rare TOM’S rims and looking like it came out of a Hyper Rev book.

We were particularly fond of Louis Bircheff’s 1971 Corolla Wagon. First of all, two-door wagon. Secondly, sure, it’s got patina, but so would you if you had traveled 407,000 miles. It’s exactly the type of daily driver you might see tucked away in a western Japan fishing town, or parked outside the main event at a classic car show. Also, how cool are the side windows? 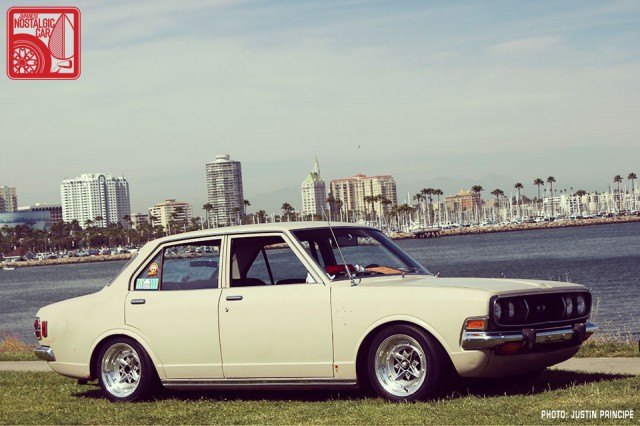 For years, Toyota’s bread-and-butter sedan was the Corona. Oddly, these T80-generation cars are all but extinct. It was a rare treat to see a Silhouette ’70 Corona (as they were nicknamed in Japan), especially one dumped on Techno Phantoms.

The interior was probably baked to dust, but at least the owner had creative ways of addressing the situation. Also, points for zokusha-bending a Utah license plate.

While the Corona sold decently, it was its replacement, the Camry, that catapulted Toyota into the number one sales spot. It may shock some of you but there were indeed several of Toyota’s stigmatized sedan of boringness at Toyotafest, including a turbocharged Camry Rally Car built for SEMA by NASCAR driver Parker Kilgerman and decked out in old school Toyota Racing livery.

Perhaps even more shocking was the fact that there were several modified Priuses, but dressing up your hybrid in SSRs or Hayashi Streets is an official thing now.

Before Avalon, there was Cressida, a BMW 5-series competitor that was once everywhere. It went completely unloved for ages, dwindling in number until a resurgence in rear-wheel-drive Toyotas breathed new life into the platform. Now they’re being snapped up by enthusiasts like AE86s were a decade ago.

On the other end of the spectrum is the Toyota Starlet. ToMoCo has tried to make the sub-Corolla thing happen many times, but they’ve largely failed to surpass their economy roots into the realm of tuner-dom (ie, Tercel, Echo, Paseo). The Starlet was the one exception, a practical hatch the size of a VW Golf, yet gloriously rear-wheel-drive. A host of Toyota fours can be swapped in, including the evergreen 4A-GE.

When it comes to utility, it’s hard to beat that near-extinct breed, the station wagon. Good lord, did Toyota have an excellent stable of wagons back in the day. TORC President Joji Luz’s kujira Crown is a thing of space-age beauty, a bold design before cooler heads at Toyota City prevailed and gave us the boxy but still cool T130 Corona and Dominick Brown’s MX72 Cressida.

Apart from its hatchbacks, sedans and wagons, the other segment Toyota had dominated for eons is the compact pickup. There was no shortage of workhorses-turned-showstoppers at this year’s Toyotafest.

Alexandro Nieto’s XtraCab V6 was one of those show cars that looked simple drop job, but upon closer look it’s obvious a ton of work had been done, including a complete 4Runner front clip swap. We also dug Adrian Suarez’s work-truck-white 1987 Hilux, so simple yet so sexy on meshies.

Amazingly, there were two 4Runners modified to resemble tricked out JDM Hilux Surfs, complete with a range of off-road gear from Japanese aftermarket companies like Jaos and Elford. 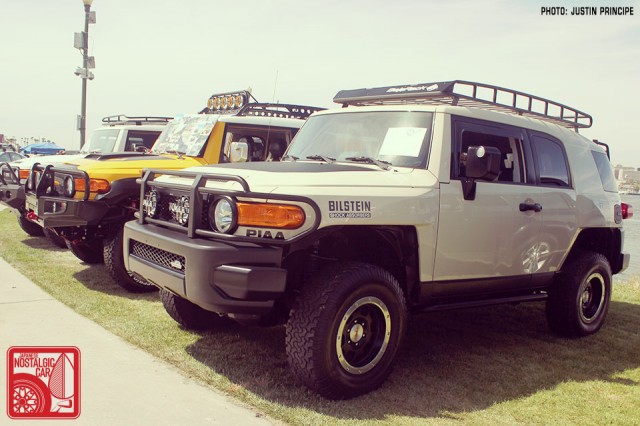 It was sad to see a lineup of FJ Cruisers knowing full well that this was the final year the wonderfully retro and very capable off-roader would be in production. The Scion FR-S gets props for its AE86 throwback references, but it was really the FJ Cruiser that was Toyota’s first heritage-inspired model in the US.

And the truck it paid homage to was Toyota’s venerable go-anywhere Land Cruiser, of which there was an astounding variety this year. Perhaps most exotic was Marco Dos Santos’ Australian-imported HJ75RV, a diesel-powered “troop carrier” that holds 10 passengers and comes with dual fuel tanks from the factory. An pop-up tent conversion our camping on the Outback makes it the ultimate doomsday scenario vehicle. Steve Kopito also won the Oldest of Show award for his 1965 FJ45 Land Cruiser pickup. 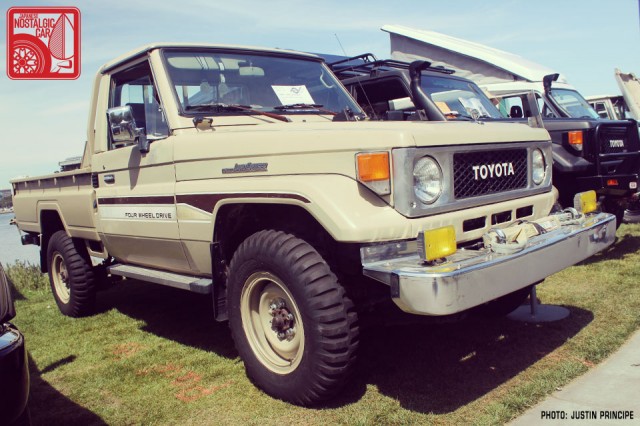 So we began our Toyotafest coverage with the news that Toyota USA was moving to Texas. How was this going to affect the contributions the automaker has given SoCal’s classic Japanese car scene, particularly Toyotafest? After all, Toyota is the headline sponsor for this event.

By the end of the day, we had our answer. Paul Williamsen, a global manager at Lexus and owner of this ex-US Marine Gulf War FJ75 Land Cruiser, got up on stage to pledge Toyota’s support of Toyotafest next year for its 20th anniversary and beyond.