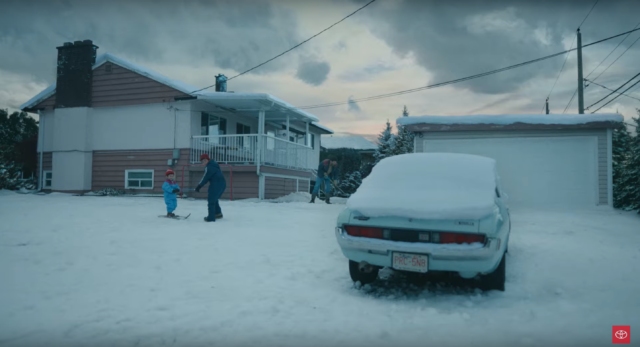 Toyota has released their 2022 Superbowl ad, and it features a couple of classics. Toyota has chosen to focus not on the cars, but on two real-life brothers, Brian and Robin McKeever, who are Olympic and Paralympic medalists. Much of the ad takes place in flashbacks to their childhoods in Canada, where Daruma Celica and an N100 pickup can be seen in the background.

Like past Toyota Superbowl ads, it highlights the athletes’ perseverance. The brothers are both cross-country skiers, but Brian McKeever was stricken with macular degeneration at age 19, which caused him to lose his vision. He continued to ski, with his brother keeping up behind him as a guide and calling out directions and obstacles like a rally co-driver. Eventually Brian, with Robin’s help, became Canada’s most decorated winter Paralympian. The duo have won seven gold medals, two silvers, and one bronze.

Unlike Nissan’s ad featuring the new Z in bright yellow the cars here are extremely subtle. Almost too subtle. The Celica is largely covered by a blanket of snow, and it quite unlikely non car-enthusiast viewers will recognize it at all. However, Toyota could have gone with random older cars, or not shown any cars at all, as they are not central to the story, and most audiences probably wouldn’t care. The addition of the Celica and Truck are a welcome touch and feel like a nod to enthusiasts.