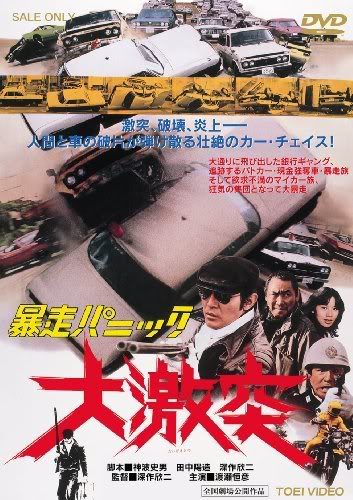 1976’s Boso Panic: The Big Crash was your typical action movie from the era. All the gritty ingredients were there: bank robber anti-heroes, a femme fatale, gunfights, and loads upon loads of car chases. What sets it apart is the fact that it was filmed in Japan, and thus the car-nage consisted of the exact cars JNCers know and love today.

200 cars were used in the filming. Of those, 20 were incinerated and an additional 30 were crashed. Likely filmed with sponsorship from Toyota (many Japanese films of the period got cooperation from a major automaker if cars were involved in any way), meaning the rides that met their bitter ends included a Hilux, Stout, a parade of S40 Crown police cruisers, and the hero car, a gold MS51 Crown Hardtop. 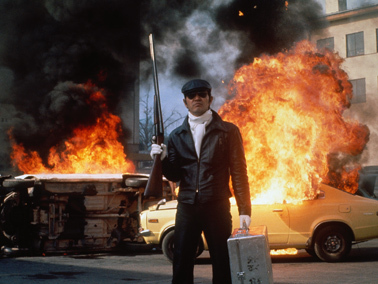 The story follows of a pair of bank robbers who plan to pull off one last job before fleeing the country for Brazil. Unfortunately that job gets one of the partners killed and soon the protagonist, played by Tsunehiko Watase, is fending for himself against the cops, other baddies and a too-clingy girl. The film culminates with a huge and at times comical car chase, in which Watase is said to have done all his own stunt driving. It’s not really worth watching the whole movie for, and the movie isn’t one of director Kinji Fukasaku‘s stronger crime films, but the background vehicles are a great snapshot of mid-1970s Japan. See for yourself in the trailer below, which highlights the major chases.