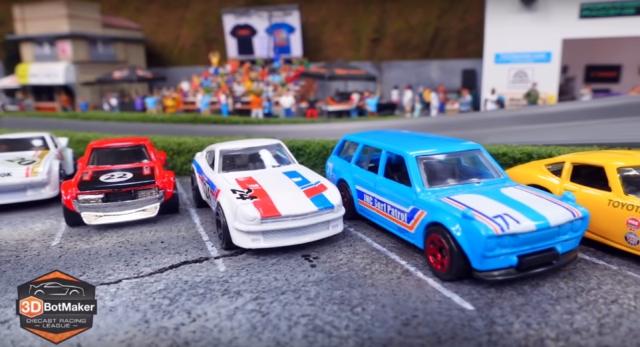 Here it is, the qualifying round for 3DBotMaker’s Japanese Nostalgic Car tournament. This race will set up the brackets and provide an idea of how fast the cars are. We had no influence on the tournament other than selecting the cars, and are also seeing this video for the first time. Let’s see how the cars stack up.

We should note that 3DBotMaker swapped the wheels with rubber tires on several of the cars with standard plastic ones so that they would roll smoother on the track. Here are the cars and their drivers, names you have probably seen on JNC.

First up we have Dave Yuan, our resident Mazdafarian, driving the purple Katayama-flared Mazda RX-3 from the original Japan Historics set. Next is my wife Carrie, driving the Hakosuka Skyline GT-X from the same set. Ryan Senensky is behind the wheel of the SA22C Mazda RX-7 from the Kroger’s mystery pack. Ricky Silverio, who owned and built a show-winning A20 Celica back in the day, is behind the wheel of the mainline Daruma Celica from 2013.

Glenn Chiou, the only one of us who’s a real race car driver and regularly campaigns his Datsuns in vintage racing, is in the mainline Datsun 240Z from 2015. We had to pick at least one Datsun 510 wagon and my son Luca Cedric Hsu, who got the whole family hooked on 3DBotMaker, is in the JNC Surf wagon from 2017. Your faithful editor-in-chief, Ben Hsu, is in the Yatabe time trial Toyota 2000GT from the Japan Historics line. Last but not least, our resident rallymaster Patrick Strong drives the Butaketsu Laurel from 2017’s Japan Historics 2.

It turns out, Mazdas are fast! Oddly, this aligns pretty closely with how these cars’ real counterparts would perform today. This isn’t always the case, as a Hot Wheels Lamborghini Miura can apparently outpace an Aventador on the track.

In this case, though, we see the two rotary powered race cars sitting at the top of the board, probably with the benefit of a ported engine and a modern 13B swap. The Celica is a bit of a dark horse, but we can say it has a Beams 3S-GE under the hood. In reality a Hako GT-X and Z with L-series motors would probably rank higher, but here the end up mid-pack. And yes, in real life the Nissans were faster on the track — or at least better developed — than the 2000GT, despite the latter’s stellar looks. A Laurel and 510 Wagon, despite their street presence, would likely be outgunned by the more powerful cars.

Now we have the times and rankings. Let’s see how the cars perform next week. Part 02 begins next Saturday, July 17, at 6:00am Pacific Time on 3DBotMaker’s YouTube channel.