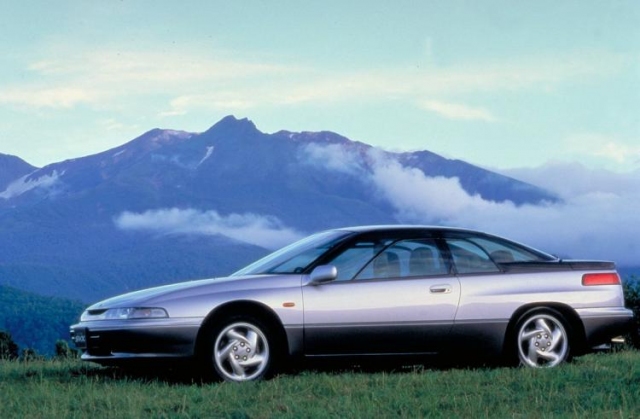 “We made the SVX from our hearts,” said Nobumasa Saeki, general manager of Subaru’s engineering division 25 years ago, in a booklet published at the model’s release. “It is the kind of car that we wanted to drive. It was the kind of car we wanted. It was what we wanted a car to be. As engineers, as drivers, we built this car based on our own true feelings.” 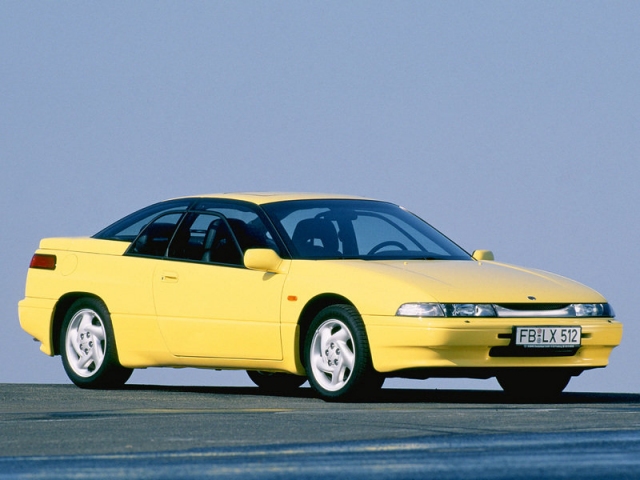 In the mid-80s, Subaru found itself growing out of its utilitarian roots and moving upmarket with cars customers aspired to own. With the Bubble Economy booming at full tilt, the competition was spreading their R&D wings and Subaru wanted to build a car that showed the overall engineering prowess of their R&D department.

Honda had developed a Ferrari-killer in the NSX. Toyota’s Supra was evolving into a Japanese muscle car. Nissan had launched dual flagships in the 300ZX and R32. Even Mitsubishi came out of left field with the 3000GT VR-4. If Subaru didn’t join the excessive spending spree, there was a very serious chance they’d be left in the Blade Runner dust of what was believed to be Japan’s rapidly expanding future. 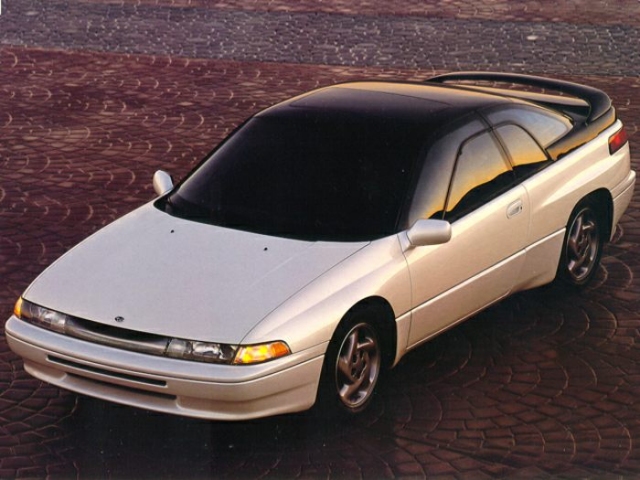 What Subaru needed was a halo car. It often doesn’t necessarily make sense on a spreadsheet, but attempting to quantify one in dollars and cents is a fool’s errand. It’s for the glory of the marque. Enter the Subaru Vehicle X — or simply, the SVX.

It would be the biggest risk Subaru had undertaken in its existence as a car company. Even if the car was a complete flop, people would say the name Subaru, and that would be a success. Nothing would be too much for the SVX, no corner would be cut. 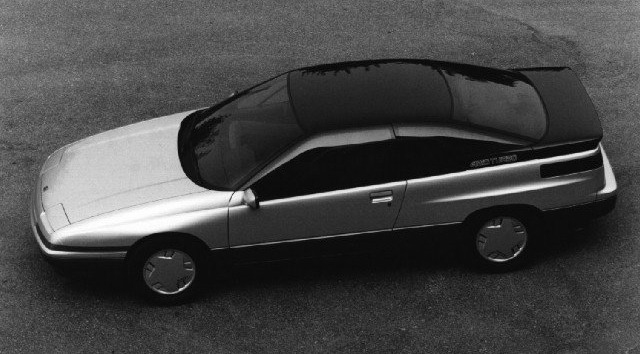 Famed designer Giorgetto Giugiaro of Italdesign was commissioned for lines that looked like something straight out of a Syd Mead sci-fi book cover. The so-called glass-to-glass canopy had been a dream of production cars since before the Jetsons, but this time it was really going to happen. Subaru has never shied away from a controversial design, and this departure from the angular shapes of the 80s was as avant garde as they came.

A closer-to-production prototype was introduced at the 1989 Tokyo Motor Show, Japan-ified by Subaru designer Madoi Takashi with more aero skirts, a loop spoiler and light bar that dispensed with the 1986 Giugiaro concept’s flip-up headlights.

Despite its concept car looks, Subaru was determined to keep the glass canopy on the production version. This turned out to be much harder than expected. On a show car, the car doesn’t have to be drivable, and the concept used extremely thick glass for the greenhouse. On a production car, that thickness would create significant distortion, a serious setback for visibility and safety. 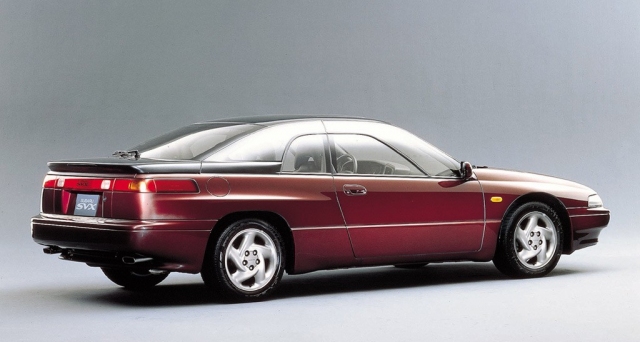 Achieving the magical balance of a curved glass canopy with flush fitment on seemingly impossibly thin pillars while maintaining structural rigidity was no small task. No production car had ever been built with such a design before, and there was no playbook. In the end, Subaru had to devise a completely new way of manufacturing automotive glass. 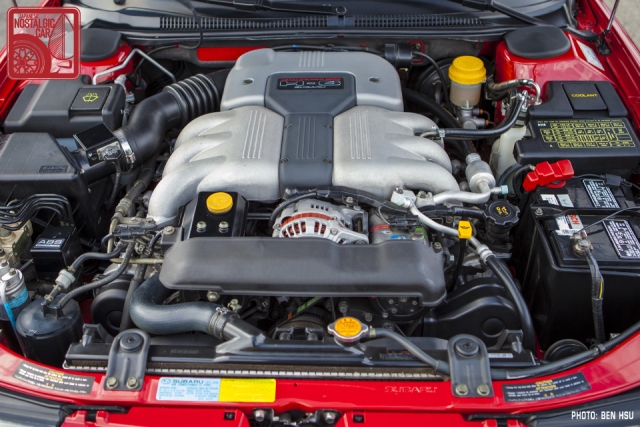 Beneath the hood engineers concocted the biggest engine Subaru had ever made, a 6-cylinder boxer displacing 3.3 liters. Featuring dual overhead cams and four valves per cylinder and sequential multi-port fuel injection, its 230-horsepower felt both smooth and powerful.

The AWD system from the XT was refined to perfection, and technology was shoehorned in until it looked like it came from Coruscant. Japanese versions utilized variable torque distribution in its AWD system and some higher trim-level versions were offered with four-wheel steering. In 1995, an S4 trim level added four-sensor, four-channel ABS and a rear viscous LSD to the mix.

As you can imagine, all this came at considerable cost. It’s rumored that Subaru lost $3,000 on every SVX built. It was runaway engineering at it’s finest, and it all resulted in a nearly forgotten 90s coupe that can be picked up for pennies today.

So why don’t people utter the letters SVX in the same way they breathlessly gush the names Supra or RX-7? Because while other Japanese marques were in locked a struggle for Wangan domination, Subaru took a different path. Its halo car would not be destined to slash track records or embarrass Lamborghinis; it’s sole purpose was to have the most refined and enjoyable driving experience possible.

It wasn’t a sports car, it was a grand tourer. 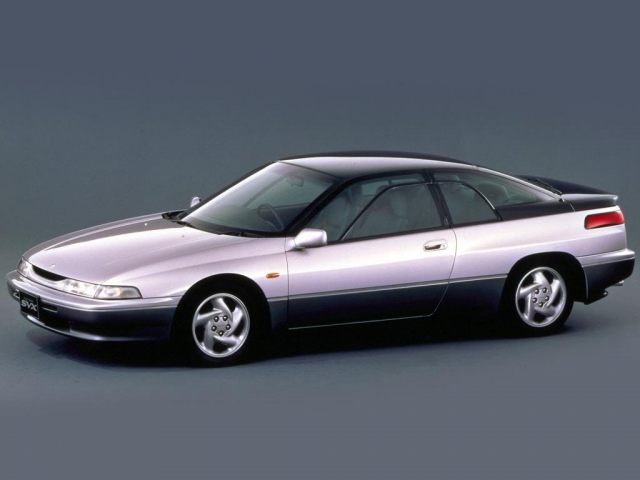 “The fundamental appeal of a car is to ‘drive,’ and driving is what I enjoy doing more than anything else,” explained Saeki. “It is comfortable even when driving long distances, and yet provides enjoyment of driving comparable to a sports car.” Indeed, when it launched the ad slogan was “500 miles a day”.

Saeki wanted to create the ultimate GT, a car with a no-drama driving experience and as much glass as physics allowed so you could take in the landscape around you. “If this canopy had been designed simply for the sake of its design, we probably would not have spent so much time and effort on it,” he explained. “The fresh driving experience surrounded by this canopy, excellent visibility, and aerodynamic performance… were the reason we decided to develop it.” 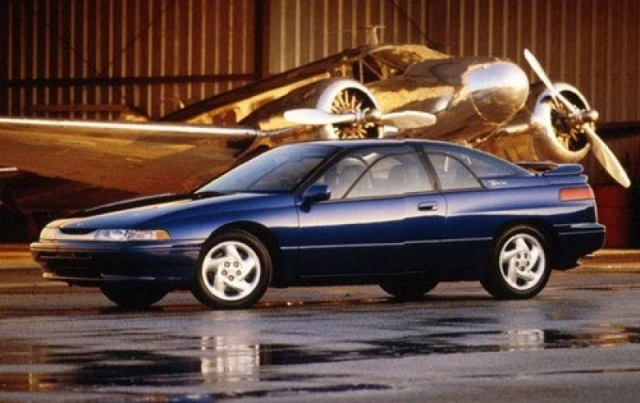 In the name of driver’s comfort, however, Subaru made a bold gamble: choosing to offer the car only with an automatic transmission. While they may have had the best of intentions, the 4EAT family transmission was taken from the Legacy. A variant was also found in the Loyale, and it showed. The SVX’s 4-speed shifted like it had originated from a station wagon because it did, and it was a slushbox through and through.

On top of derailing the driving experience of an otherwise perfect vehicle, it was also a tragic Achilles’s heel. The transmission family, already known for having difficulty delivering power reliably from the 88-horsepower EA82 from a third-gen Leone, was a time bomb with the SVX’s 230-horse EG33. Sadly, it would be the SVX’s undoing. 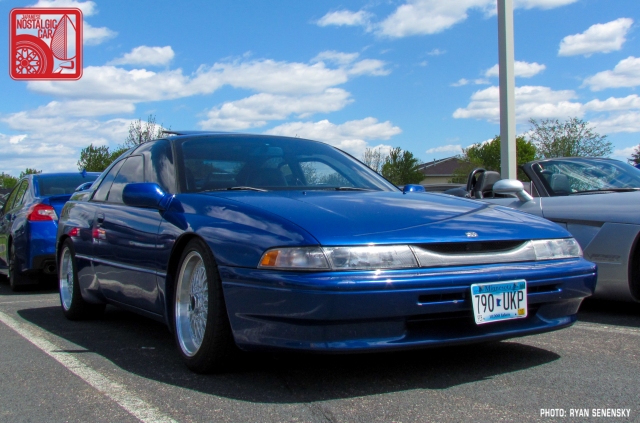 Luckily, enterprising Subaru owners in following decades began to take notice of Subaru’s Lego-like parts interchangeability, and found that the automatic could be relatively easily be replaced with a proper manual, like God intended, from an EJ motor (the swap has been very well documented). If, for some reason, an automatic appeals to you, sourcing one from an Outback has been common practice and a reliable choice. 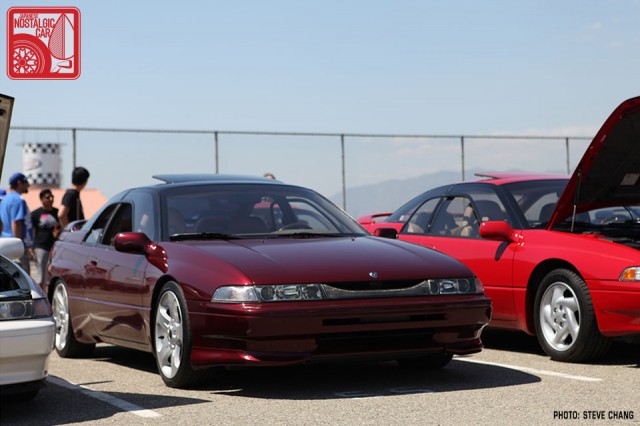 Once the transmission is sorted, you are gifted with a superbly good automobile. An SVX with a manual transmission is every bit as comparable to a Lexus SC 300, 2-rotor Eunos Cosmo, naturally aspirated Z32 300ZX, or Acura Legend Coupe.

Its 228 pound-feet of torque provide enough grunt to make it fun and exciting to drive, albeit a bit slow on top end. The vast majority of road driving in an SVX will result in a massive smile on the driver’s face. Even if said driver decides to thrash it through corners like a yobbo, the AWD system can sort out just about anything thrown at it. 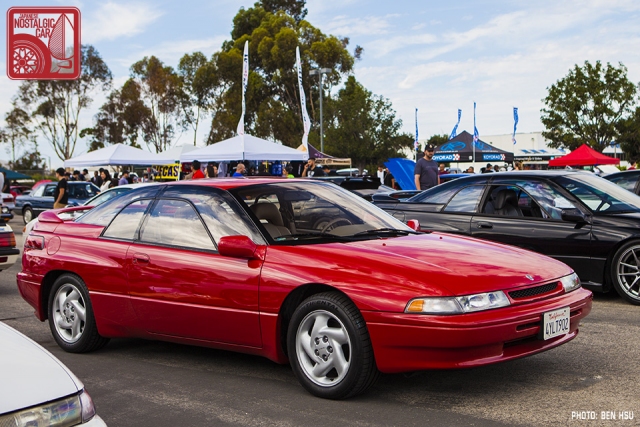 Recently, the Subaru SVX has begun to gain traction. Top honors this year at JCCS Street NeoClassics went to a pristine example. With prices of the other Bubble Era halo cars entering the $50,000 range and above, more and more enthusiasts have started to acquire SVXes.

Since the most examples succumbed to their stock transmissions failing at peak depreciation, numbers of surviving cars are low. They won’t always be the $5,000 diamond in the rough they are now. Nearly every internet list of future collectibles notes the SVX and consistent speculation like that affects prices, as shown by the Hagerty value scale. The SVX will have its day, and that day is coming soon.

In Japan, some special edition releases of the Alcyone SVX might be of interest, especially since they will soon be legal to import. In November 1993, to celebrate the 40th anniversary of parent company Fuji Heavy Industries’ founding, the company released the SVX S40. Equipped with blue-tinted glass, monotone interior, Jacquard fabric and an exclusive Peacock Blue Metallic body color, only 300 were made.

Subaru followed up with the S40II in July 1994, which featured a unique instrument panel design, moquette seats, and either a Light Silver Metallic or Emerald Green Mica exterior color. This was limited to 300 units as well. 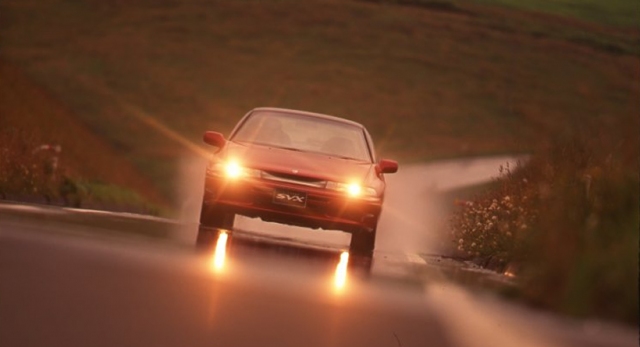 When we think of Subaru performance today, the notion conjures up the rally-bred WRX STI or the affordable and eminently flingable BRZ. However, the SVX came out a year before the Impreza and preceded all the turbocharged sports sedans it spawned. It’s easy to forget just how radical the SVX was.

“I want Subaru to be the ‘driver’s car brand,'” Saeki declared in his introduction to the SVX. Along with the first-generation Legacy, it represented a distinct shift towards driving enjoyment from the purveyor of BRATs and Justys. “The SVX, which has the form of a sporty coupe and is positioned at the top of our lineup in terms of performance, is a new symbol that clearly indicates the direction of the Subaru brand identity.”

That’s what a proper halo car should be, but in today’s economy it’s unlikely we will ever see an SVX-level car from Subaru again. When all was said and done, and if the claims about its losses are true, the company would have burned $75 million on the SVX. It was perhaps a once-in-an-automaker’s-lifetime event, inspired by Saeki’s singular vision. “If I were told I could pick only one car,” he concluded, “This is what it would be.”