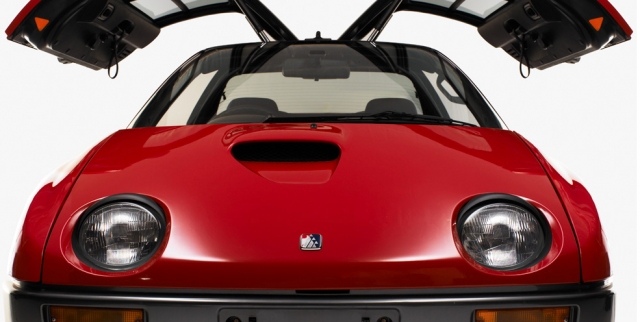 Kei cars are cool. Slow and small they might be, but they are feats of engineering ingenuity that extract the most space, efficiency, and usability out of a tightly defined set of rules. And sometimes, the most fun as well. Perhaps nothing embodies this better than Mazda’s Autozam AZ-1. 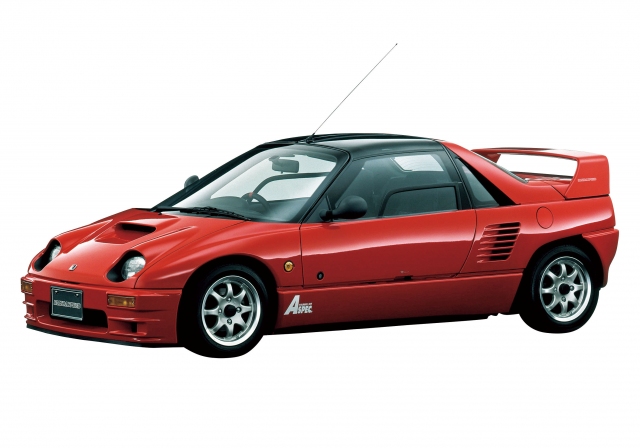 Kei car specs sprang up in post-war Japan as a way to promote the growth of the domestic car industry and get the country on wheels for the least amount of money possible. Over the years, the kei jidosha has evolved to keep pace with contemporary automotive standards and tastes, gradually seeing increases in size, both physical and in engine displacement.

They fit the crowded Japanese streets much better than the “standard” cars we are used to, and for much of their existence, their owners enjoyed significant tax benefits. However, for nearly just as long, people have been enjoying them viscerally as well. 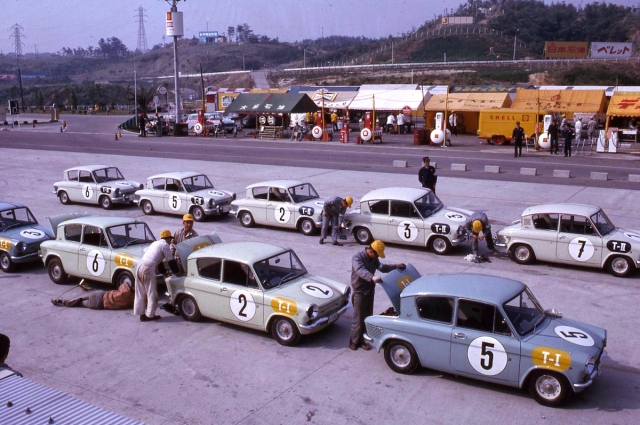 Kei cars have been racing since the beginning. The first Japanese car to reach 100 horsepower per liter was also a kei: the Subaru 360 Young SS. Much like the original Minis and Fiat 500s, kei cars were being hotted up and raced from early on.

Though it was a uniquely Japanese form, kei cars mirrored what was happening in the country’s larger automotive scene. More outright sports kei, like the Suzuki Fronte Coupe, started to appear in the 1970s, along side Celicas and Savannas. By the 1980s, hot hatch fever also spread to kei cars with offerings like the Suzuki Alto Works appearing on the streets with the Civic SiR and Corolla FX.

Whatever was happening in the broader car market, there’d be a kei car equivalent. And when the Bubble Era hit, with Supras and NSXes prowling the Wangan, it was perhaps no wonder then, that proper kei sports car would emerge too.

As you may know, Suzuki is a master at kei. At the 1985 Tokyo Motor Show, the Hamamatsu-based carmaker showed a concept called the R/S1, a mid-engined targa sports car powered by the 1.3-liter engine from the Cultus (Swift). It was followed two years later by the RS-3, an evolution of the R/S1, now closed-top. This project, however, was eventually suspended by Suzuki, whose focus shifted to another project that led to the Cappuccino.

Collaborating with Suzuki, Mazda then picked up the mid-engine sports car project, putting in charge Toshiko Hirai, who was also leading the development of the NA Miata the time. Hirai and his team worked on the design and engineering of the mid-engined sports car using Suzuki’s powertrain.

At the 1989 Tokyo Motor Show, they showed three concepts, now dubbed AZ-550 Sports Types A, B, and C. The car was placed under the Autozam marque, which, per Mazda’s brand diversification scheme at the time, focused on compact and kei cars. 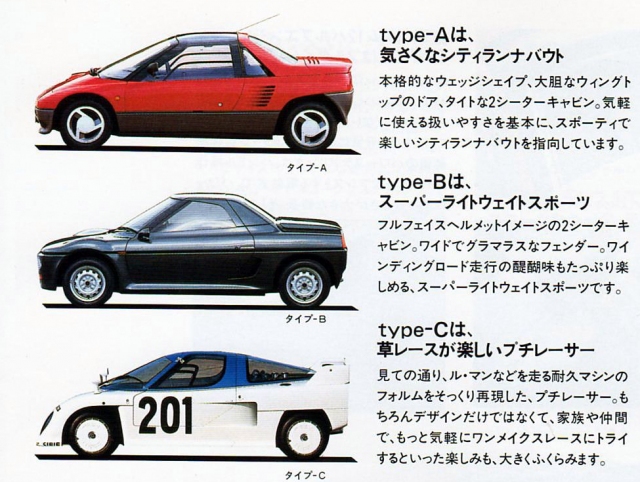 The AZ-550 Sports trio was a spectacular display of the Bubble Era spirit, overflowing with imagination and enthusiasm. Type A had gull-wing doors and, with the exception of pop-up headlights, was incredibly similar to the eventual production AZ-1.

Type B was more akin to a further evolution of the RS-3, with conventional doors and a distinctive pyramidal greenhouse. Had this version gone into production, it would have been rather similar to the Honda Beat. Interestingly, Type B’s theme was “high-tuned pure sports,” suggesting that this was the more focused and spartan sports car.

Type C was nicknamed “petit C car,” sporting a miniaturized Group C racer body similar to Mazda’s Le Mans race cars. It even sported the company’s blue-on-white livery. All three cars were powered by 550cc Suzuki engines, as this was the displacement limit of kei cars at the time. Public reaction, as you might imagine, was incredibly positive, and Mazda decided to develop Type A into the production version. 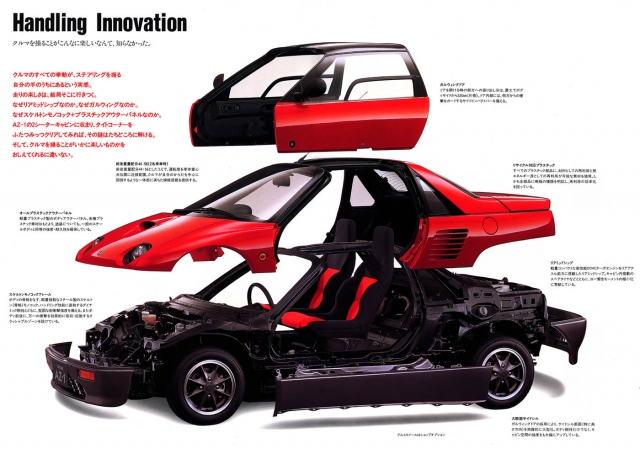 By the time the Type A mid-engined sports kei went on sale in 1992, the kei car engine displacement limit had been raised. As a result, the production Autozam AZ-1 had a turbocharged 660cc 3-cylinder engine shared with the Cappuccino, coupled to a 5-speed transmission.

The powertrain and many other mechanical components were sourced from Suzuki, though the car was manufactured by Kurata (now Keylex), a Hiroshima-based automotive components supplier.

The AZ-1 may have been a kei car, but as a mid-engine sports car with gull-wing doors, it was quite exotic. As expected, its dimensions were extremely compact. The stock AZ-1 weighed just under 1,600 pounds, and the inline-3 engine — not an unsophisticated one, with four valves per cylinder –- produced 64 turbocharged horsepower. With a top speed of 87 mph and a 0-60 time of 11 seconds, it may not have been fast or quick, but that was not the point of the car. 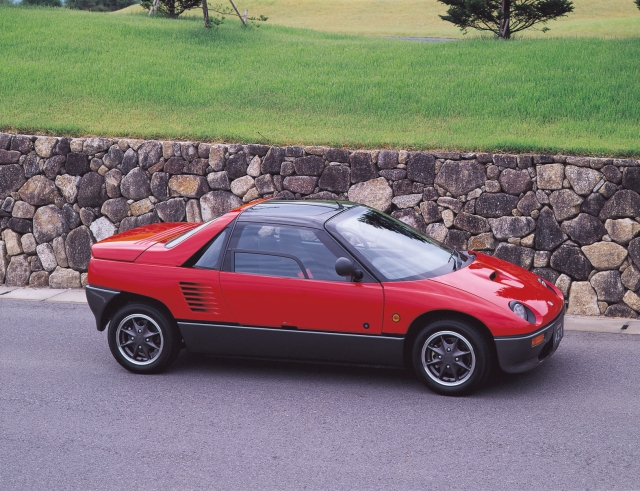 The AZ-1 drove like few other cars did. To say that it was nimble and responsive is a gross understatement. Suspension was MacPherson struts at all four corners, with disc brakes all around. Its size and lightness, along with its incredibly fast steering with only 2.2 turns lock-to-lock, conspired to make it a true driver’s car — although one best suited for the seasoned enthusiast driver, as it had a reputation to be a bit skittish at speed. In that regard, it shared some of the handling characteristics as other Bubble Era mid-engined sports cars. Regardless, a drive in the AZ-1 is enough to convince anyone that you don’t need to go fast to have fun.

In many ways, cars like the AZ-1 signify the ethos of the Bubble Era Japanese car industry. It demonstrated how, back then, just how pervasive the drive was to create innovative, original, and just plain awesome vehicles. 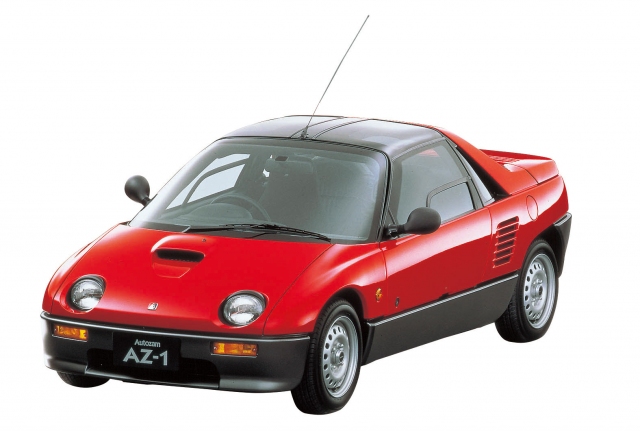 I say “they” because the AZ-1 was not alone. It was part of the “ABC” sports cars, the letters standing for the Autozam AZ-1, Honda Beat, and Suzuki Cappuccino. Each of these cars represent a different take on the sports car concept, realized as pure driving machines, but in miniature size.

Unfortunately, the bubble burst, and along with it went the public’s appetite for disposable income joy rides. Not helping matters was its relatively high price of ¥1.49 million, which was only marginally less expensive than the NA Mazda Roadster. 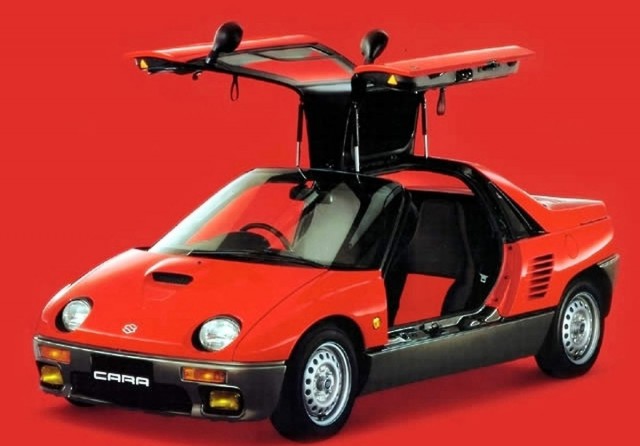 In the end, only some 4,400 examples were built over an 8-month production run. The car actually remained in the Mazda lineup through 1995 thanks to slow-moving inventory. In fact, 531 of those sold were rebadged as Suzuki Cara starting in 1993, likely to help move inventory. It was essentially identical, save the badge and a pair of rectangular front fog lamps. The The AZ-1 was well-received and well-regarded by the motoring press, but its timing could not have been worse. 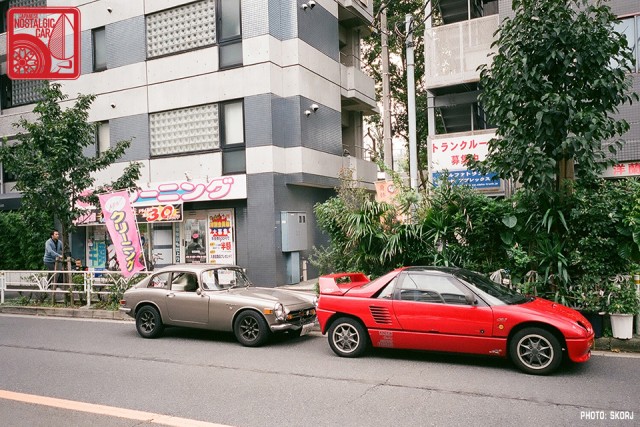 It is tempting to imagine a world where the AZ-1 actually flourished. Thanks in part to how long it took Mazda to clear out its back stock, we can actually get a glimpse into this world.

To entice customers, Mazda pushed out a bevy of special editions and concepts after launch, some of them hinting that the company was expecting the AZ-1 to catch on like wild-fire among enthusiasts. It’s a dizzying array of variants. The first special edition was the Type-L, which simply consisted of additional stereo equipment compared to the standard car. 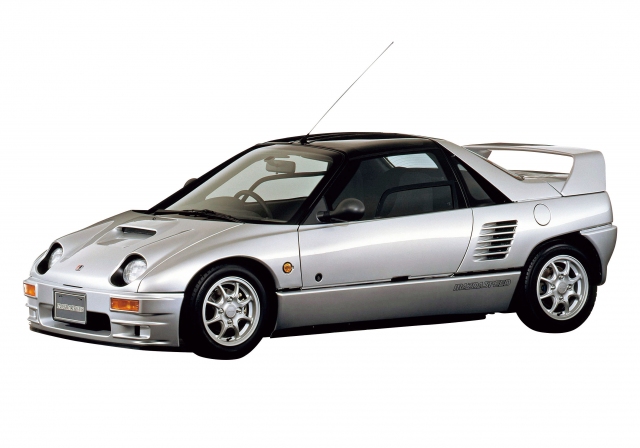 More substantially different was the MazdaSpeed version, available only in monochromatic paint scheme (black, red, or silver) and a bespoke MazdaSpeed body kit, which included a large basket-handle rear wing and alloy wheels. For this, numerous go-fast options were made available, such as a performance suspension and limited-slip differential. Production was limited to 100 units.

The third special edition officially offered for sale was the M2 1015. Like the MazdaSpeed version, the 1015 wore a distinctive monochromatic body kit and the same MS alloy wheels. The distinguishing features on the 1015 were a pair of driving lights integrated into the hood between the headlights and a racier rear wing. Colors offered were black, white, and silver. Production was limited to two runs of 50 each. 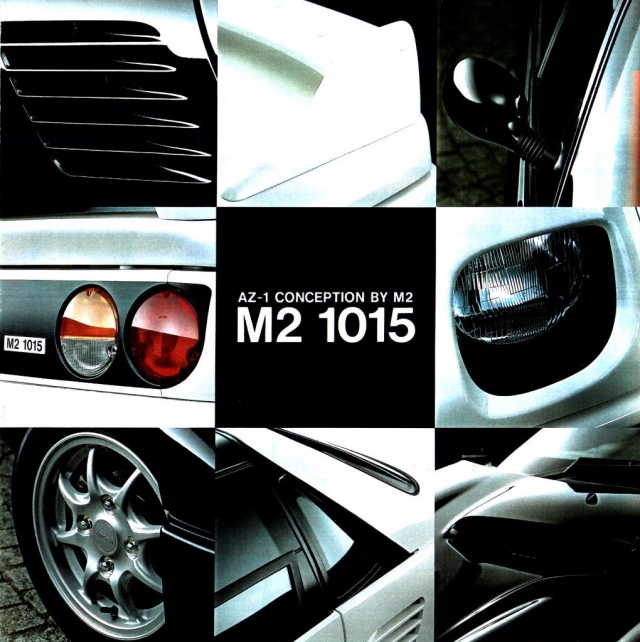 And those were the production variants. In terms of concepts, prototypes, and one-offs, the AZ-1 saw more than its share. M2 itself produced no fewer than three. Unveiled at the 1993 Tokyo Motor Show was the 1014 concept. This was an off-road version of the AZ-1 that seemed to channel the spirit of the Lancia Stratos.

However, the proper rallying version was actually manifested in the 1015A, which ostensibly foreshadowed a rally car based on the AZ-1. Lastly, the 1015B was a T-top convertible AZ-1 with detachable roof and side windows made of clear plastic instead of glass. 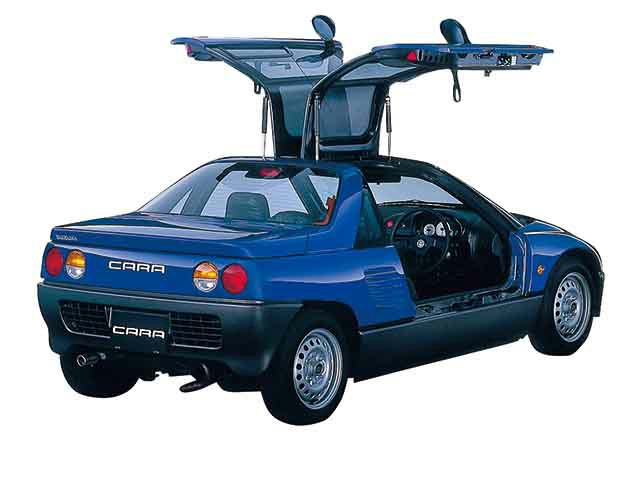 It is fair to say that these concepts were created to improve AZ-1 sales, but they do betray genuine excitement within Mazda around this car. It was a very unique and exciting sports car, having some of the most tantalizing features of exotics all wrapped up in a kei car package. Its price may have been high relative to other kei cars, but it was still reachable to a lot of enthusiasts.

Aftermarket enthusiasm also abounded. Trust, for instance, built a modified Cara R for speed trials. Saburo created a wide-body kit, rumored to have been designed by Pininfarina (this is unverified) reminiscent of the Abarth 1000 Zagato, but it was so expensive and the width pushed it beyond kei car dimensional restrictions that only five were made. The maddest, perhaps, was the GReddy VI-AZ1, built by rotary tuner RE Amemiya, powered by the 3-rotor 20B-REW from the Eunos Cosmo. 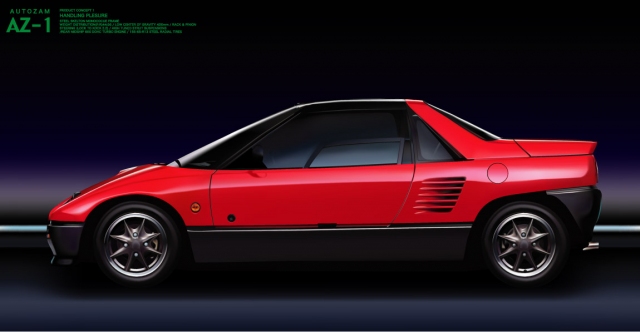 These are some of our favorite cars to have emerged out of the Bubble Era. They embody the sheer imagination and playfulness of the times, one that’s probably never to be repeated again.

With the AZ-1 and Cara having reached the 25 year mark in 2017, they are now legal for import into the US. Some have already trickled through our borders. While you won’t get the same driving involvement on North America’s wide interstates, those living in urban areas or with access to twisting mountain roads would get an eminently unique driving experience.

Some Images courtesy of Mazda, Suzuki.