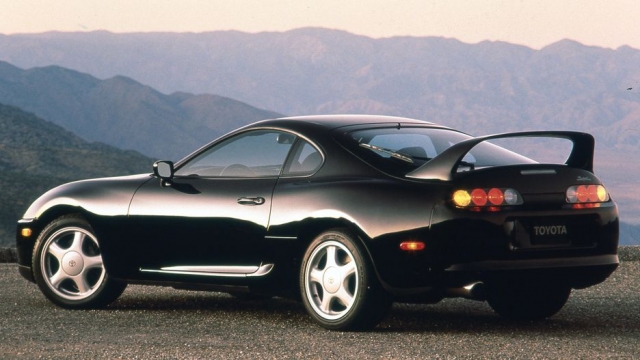 In the pantheon of Japanese cars, none is more synonymous with brute power than the Toyota Supra Twin Turbo. A legend in its own time, it is one of those rare cars whose status as classic was cemented long before it reached the quarter-century threshold. With the passing of this year, however, the JZA80 Supra is officially 25 years old, and we can finally welcome the hero as an official Japanese nostalgic car. 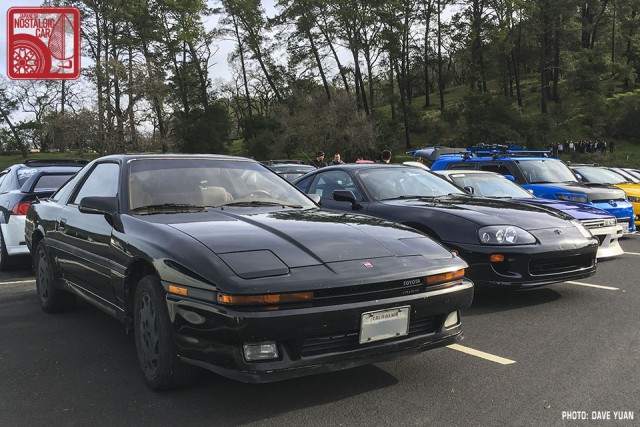 By the end of the 1980s Japanese automakers, riding the Bubble Era’s bull market, produced some of the best sports cars in the world. The third-generation A70 Toyota Supra was at one point the fastest car in Japan, but its reign was brief. Soon Nissan had the R32 Skyline in addition to the Z32 Fairlady Z, Mitsubishi the GTO, Mazda the FD RX-7, and Honda the NSX. When the time came to replace the A70 in 1989, Toyota knew that it was up against a new cohort of rivals. 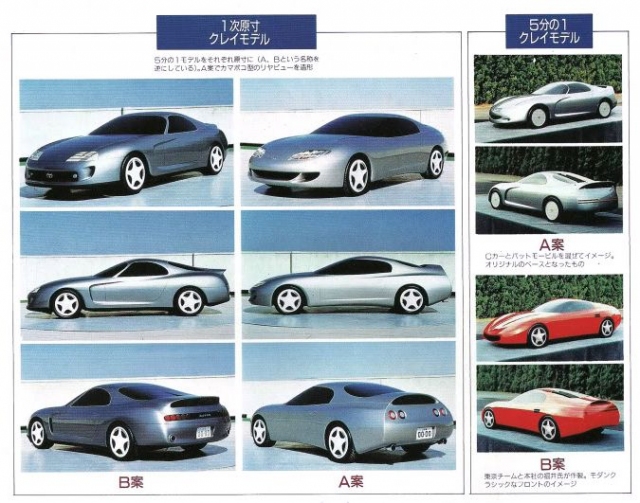 To challenge them, Toyota would devise a new powertrain, its most powerful yet. Toyota stuck it into a chassis that not only had more space, plusher appointments and better tech, but was also somehow lighter than the original. In advertising they called it “The Sports of Toyota,” signifying its position as a Toyota flagship. 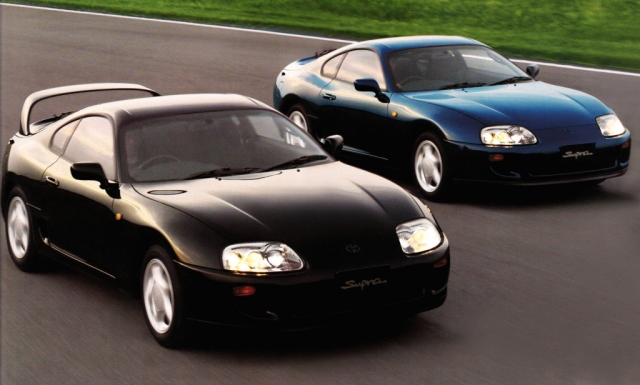 Toyota used aluminum extensively to reduce weight wherever possible, particularly in the front end to offset the heft of its prodigious powerplant. The subframe, hood, and control arms were all crafted from aluminum. Toyota didn’t stop there. Every piece added was a calculated decision over what material would best serve the car. Even the carpet fibers were hollow, an effort to reduce weight. As a result, even the heaviest fully loaded A80 Supra weighed about as much as an automatic A70 Supra, but possessed far greater capabilities. 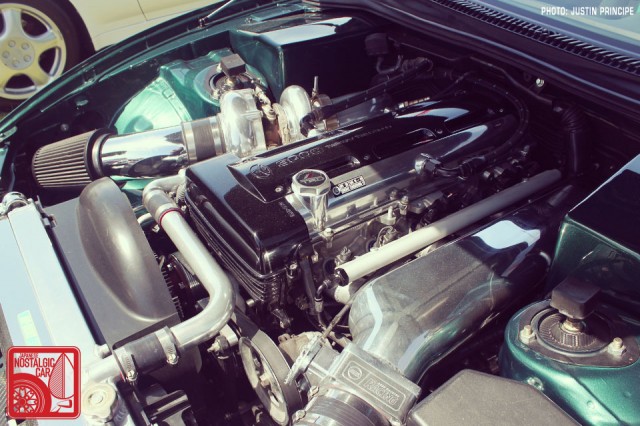 At the center of the superb chassis was the heart of the A80 Supra’s legend, the storied 2JZ-GTE engine. Officially, it generated 276 horsepower in Gentleman’s Agreement-restricted Japan, but in the untamed wilds of the export market, it produced an astounding 320 horsepower due to revised cams, injectors and turbochargers. By comparison, a contemporary Ferrari 348 had just 312 prancing horses. 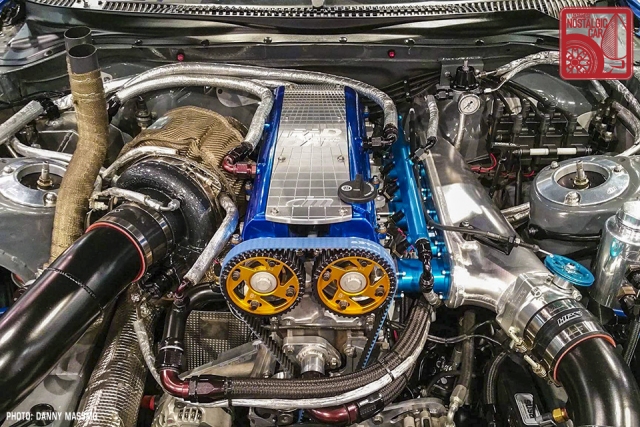 The 2JZ was the culmination of Toyota’s best minds creating an engine that was not only supremely powerful, but endlessly reliable to boot. It boasted a perfectly square block, meaning the bore and stroke ratios were exactly the same. The iron block was insanely strong, with a forgiving, non-interference, aluminum twin-cam, 24-valve cylinder head. The 2JZ engines are easily capable of over 800 horsepower on stock internals, and tuners like Titan Motorsports have claimed that an absolutely nuclear 3,000 horsepower is possible with a fully built engine. 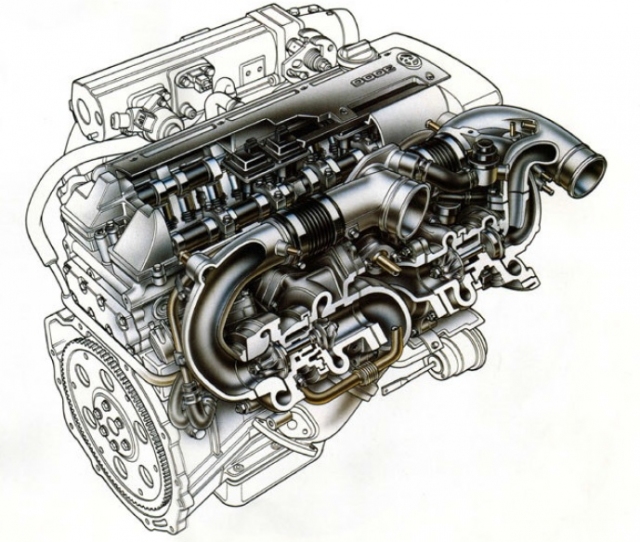 The factory sequential turbo was a massive technological jump over the single-turbo unit found in the A70 Supra Turbo. It’s not dissimilar from the setup found in a Porsche 959 or FD Mazda RX-7 — a smaller turbo spools up quickly and at lower rpms while a second turbocharger builds pressure at a lower rate. Eventually both send their full boost and provide what was then considered supercar-level acceleration.

It’s a complicated setup (which is why most modern aftermarket turbo kits go with a large, single-turbine layout), but it was the height of Toyota’s era of over-engineering and over-building, and no expense was spared. 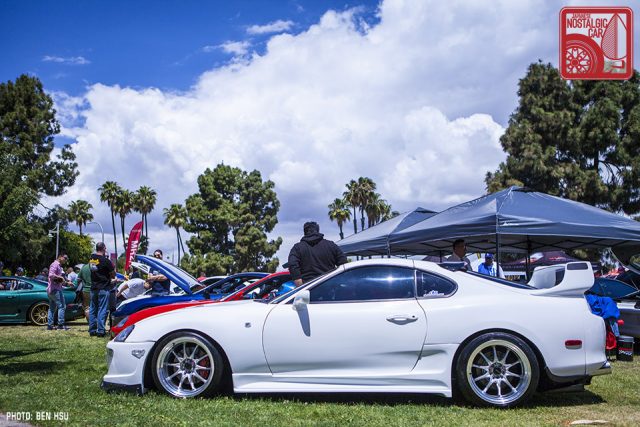 Behind the 2JZ powerplant sat either an A340E 4-speed automatic, W58 5-speed manual for naturally aspirated models or, most desirably, a 6-speed Getrag V160 manual transmission found in the twin-turbo models.

While the W58 was well-suited to a 200-horse engine, its smaller, less robust case and gearing usually called it quits around a 400 horsepower tune. The Getrag V160 (and later V161), on the other hand, was an absolute brute and internally almost identical to the V160 found in the R34 Skyline GT-R. In stock form it’s perfectly suited to a factory 2JZ-GTE with its 3.266 final drive. However, it was also robust, seemingly unkillable, and known for being able to hold well over 1,000 horsepower. 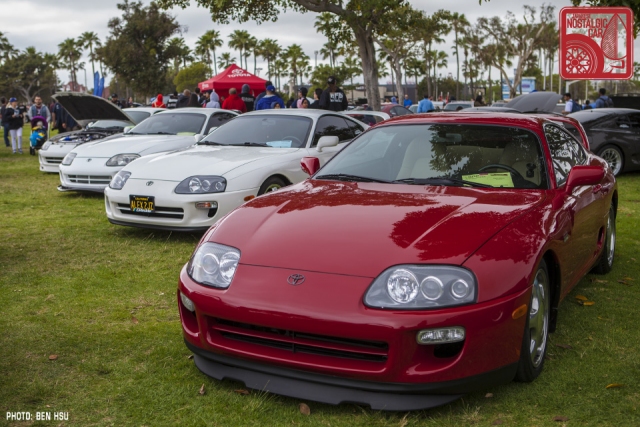 Cladding the awe-inspiring mechanicals was an exterior design of elegance and beauty. Isao Tsuzuki’s penmanship on the A80 is second to none, and is aesthetically just as on-point as the guts of the car. Note a distinct lack of unused vents or body lines. Simplicity is beauty, and also begat a drag coefficient of 0.32, quite good even by today’s standards. 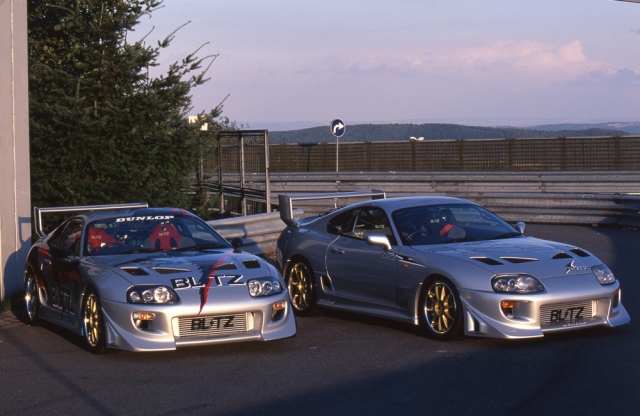 With such fantastic engineering behind it, the Supra quickly became a giant among tuner cars. In 1997, the Supra took the Nürburgring lap record for modified vehicles and smashed it to pieces with a 2JZ-shaped hammer. A joint effort between Japanese tuner Blitz and Britain’s Racelogic, it scorched the circuit with a time of 7:49.40, dethroning the Gemballa Porsche’s 7:52 held since 1995. 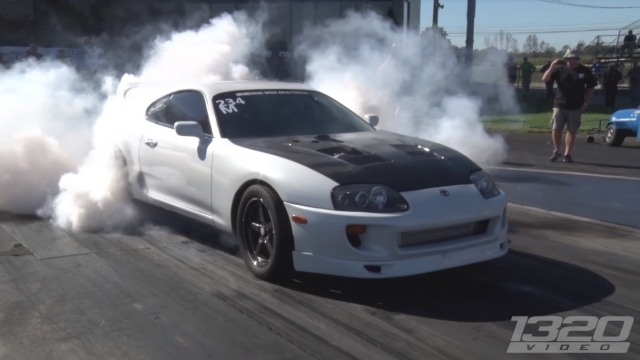 In America, the Supra came about when drag racing seemed to be the predominant form of testing automotive prowess. While the Supra saw success in professional road racing, it pales in comparison to what privateers have been able to accomplish on the drag strip.

Today, it’s widely accepted that the A80 Supra is one of the most capable drag racing chassis of all time. It was one of the first to prove that Japanese cars could be just as fast as quick as the old guard of Detroit V8s as well as cars like the behemoth 1,500-plus-horsepower UGR Lamborghinis. 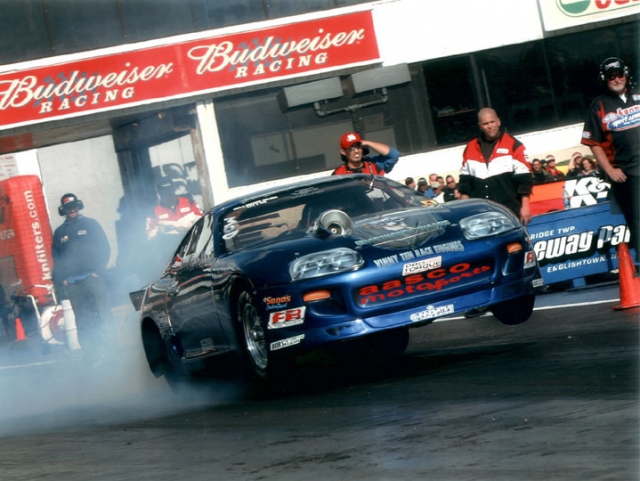 In 1997, a drag racer named Vinny Ten discovered a salvaged Supra in a scrapyard and created the first purpose-built Supra drag racer. The car was back-halfed (tube chassis rear end) with a funny car-style roll cage and a Ford 9-inch rear end, and was among the first fully built 2JZs in America.

Vinny trailblazed a number of firsts for the Supra, the first 11, 10, 9 and 8-second times were all Vinny’s. In its ultimate form, the Supra eventually hit the 6-second range and established the Supra as a go-to chassis for drag racing as a whole, not just imports. 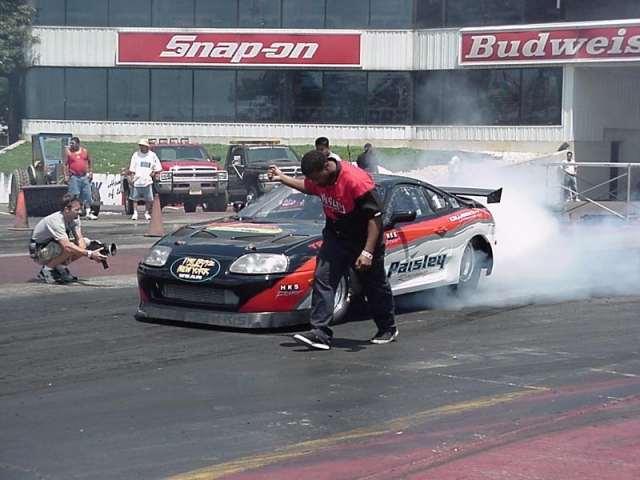 While Vinny Ten was busy experimenting with the outer limits of 2JZ power, another stateside Supra pioneer, Craig Paisley, was exploring what Toyota’s factory engineering was capable of. Without modifying even the factory valvetrain with the exception of camshafts, Paisley was able to produce an astounding 780 horsepower. That may not seem like much by today’s standards, but it was unreal in 2000. 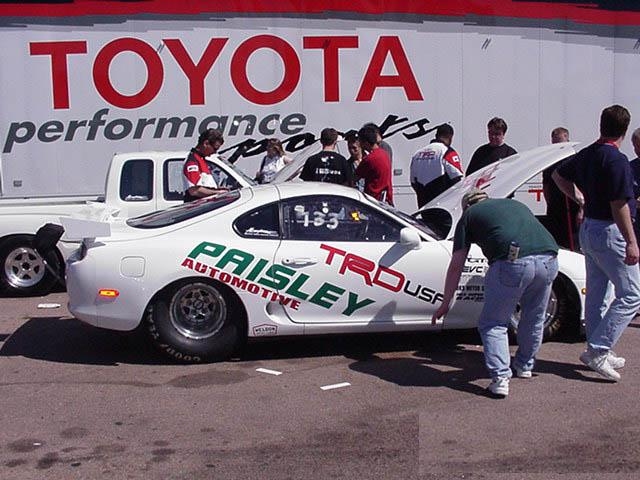 Paisley’s car eventually gained the attention of Toyota and at the turn of the century received sponsorship from TRD, the first time a Japanese manufacturer had backed an drag racer in America. This car eventually went on to run a 8.72 second quarter-mile, an astonishingly fast time for a vehicle with a stock long block. 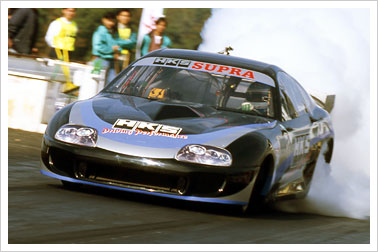 Even more astonishing feats were performed with the A80 chassis in the 2000s. HKS brought their 1400-plus-horsepower 3UZ-FE V8 powered Supra to America in 2002 with the intentions of running in the Pro-V8 class of the NHRA Summit Sport Compact Drag Racing series. Unfortunately, the class was cancelled after the 2001, so HKS used the car for exhibition runs at various tracks throughout the season, eventually setting a world record of 6.893 and being the first Supra into the sixes. 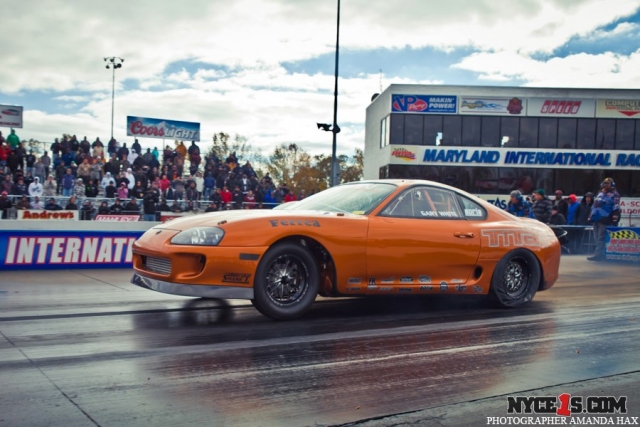 Throughout the 2000s, the title of fastest Supra, and by extension fastest import, changed a number of times. Titan Motorsports of Orlando, Florida alone has held over a dozen titles in the last 15 years. The Supra also has seen extensive campaigning on the standing mile and 1/2-mile strips as well, a category of racing dominated by super cars and modern muscle cars. 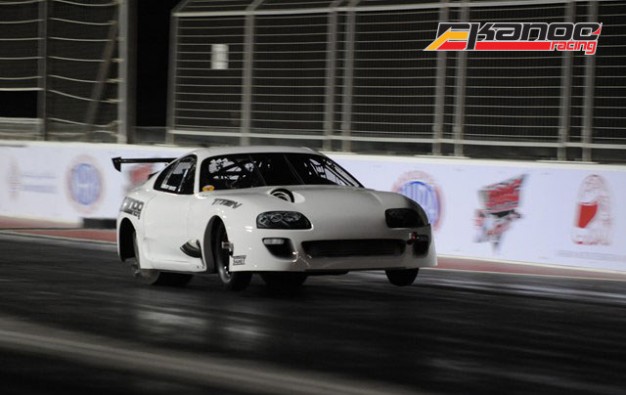 Currently, the fastest Supra in the world is Bahrain’s Ekanoo Racing’s 2JZ-powered Outlaw Class car with a quarter-mile time of 5.77 seconds at 247 mph. That makes it the first Japanese car in the 5-second range and the world’s fastest independent rear suspension Supra. Of course, there’s no shortage of “streetable” Supras deep into the 8-second range. 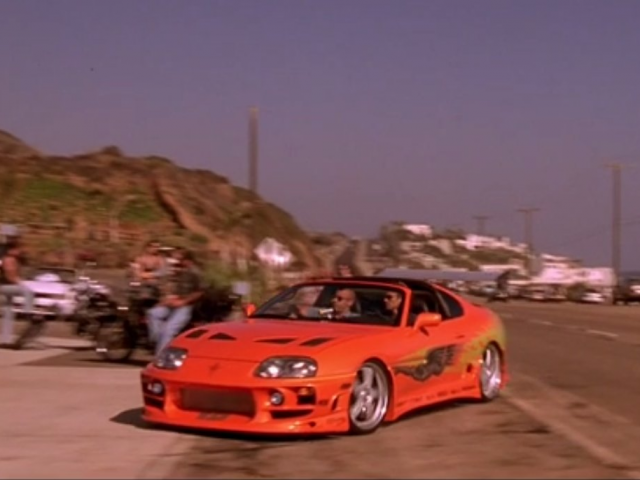 With a solid reputation for brutal amounts of power possible from the behemoth 2JZ, the car was given a starring role in 2001’s The Fast and The Furious. The “10-second car,” as it is referred to in the movie, remains the most iconic car of the franchise and catapulted the Supra to idol status for countless young viewers. 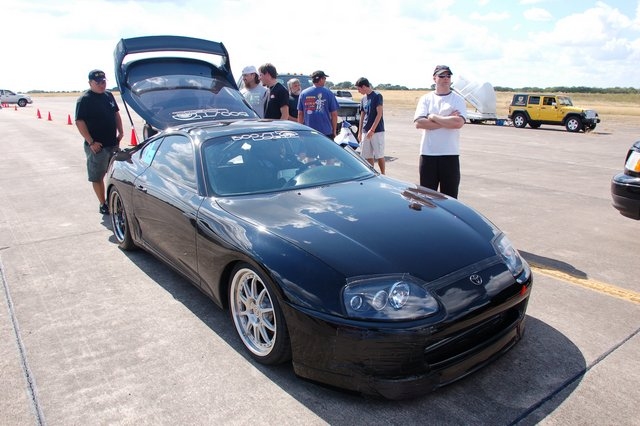 Arguably, the most notable example among streetable Supras is Sriyantha Weerasuria’s BoostLogic 6-speed Supra. This car simultaneously held the record for the quickest and fastest Supra in the quarter-mile with an elapsed time of 7.91 seconds at 189.9 mph. In 2009, it earned the title of world’s fastest car with a manual transmission for Unlimited Street class at the Texas Mile with a speed of 246.24 mph. This was all accomplished with a car with road-legal registration and license plates and utilized a stock V160 transmission. 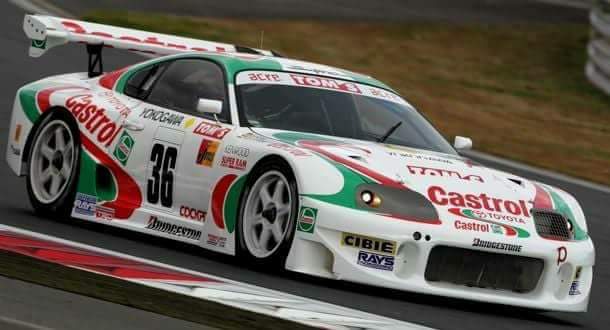 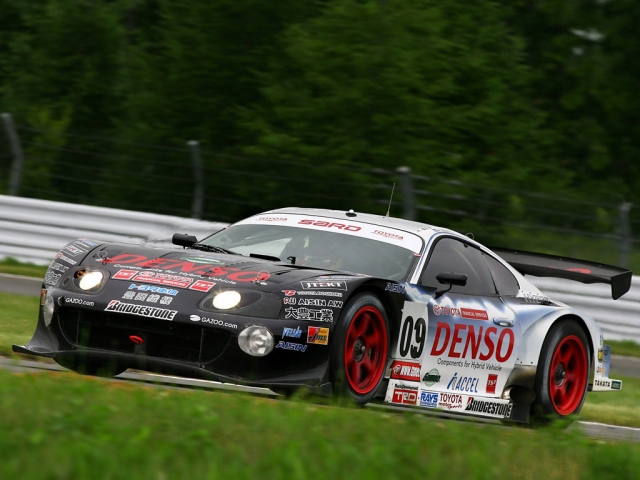 In 2007 Toyota Team SARD modified an A80 Supra with a hybrid AWD system. Called the HV-R, it competed in Japan’s Super Taikyu endurance races and finished first at the Tokachi 24 Hour race in 2007. This made it the first hybrid gasoline-electric race car to take home a win in the history of automobile racing. While it wasn’t the original powerplant of the Supra, it is still quite an accomplishment and about ten years ahead of its time. 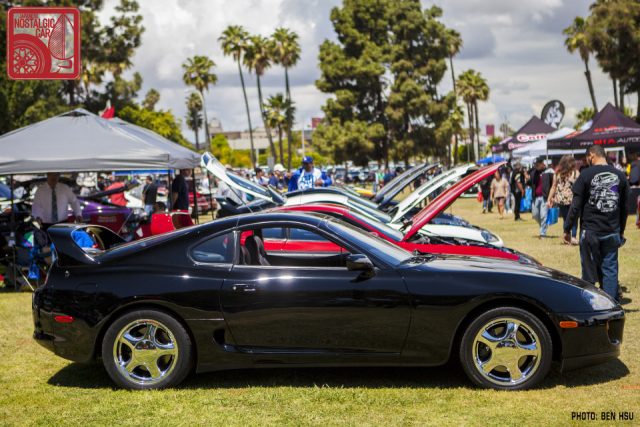 Universally adored by anyone with even a modicum of interest in Japanese cars, the Supra is beatified by speed freaks and conservation-first collectors alike. For a production car, its numbers are somewhat low. Toyota City produced just 11,500 in total. With a catalog of racing successes as long as the works of Isaac Asimov, the Supra is poised to become a blue chip classic in the near future. 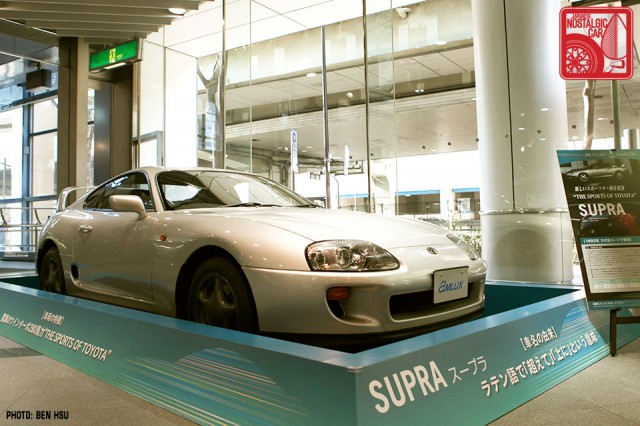 US sales ended in 1998, while Japanese production continued until 2002. Unlike most mainstream marque models, Supra values never actually dipped low enough to become beaters. The nadir was probably around the $30,000 mark for a twin-turbo model in the mid-2000s. Prime examples are inching ever closer to the six figure number, with recent sales topping $90,000. Nowadays, stock examples are increasingly difficult to find, but those with the means can do so. 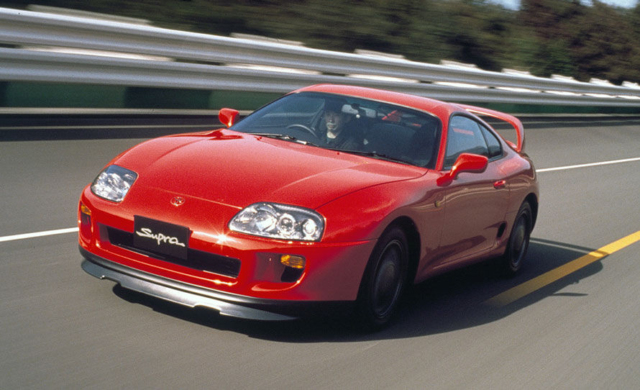 Contrary to other classics, the Supra is endlessly reliable, with parts that are not only accessible but affordable. The A80 is the ultimate expression of Japan’s engineering mastery, Toyota at its finest. There is an icon for every generation. For those who grew up in the 70s, that car might have been the original Mustang. For those born in the 90s, it always has been and forever will be the A80 Supra.

permalink.
This post is filed under: 25 Year Club and
tagged: A80, supra, toyota.